These numbers acted like a one-two punch for the market.

And based on what the CPI numbers said, it’s clear there are two real culprits ruining the party… food and energy costs.

These two areas are hitting consumers hard… and having a rough impact on stocks.

So today, let’s look in-depth at these real pain points for the U.S. economy right now… and determine the best places for our money as we ride out this continued volatility.

Hitting Us in the Wallet

The average American spends nearly an hour commuting to and from work every day. That translates to roughly 42 miles a day. The average U.S. car drives 14,263 miles a year. And the sobering truth about this is that there are costs involved.

And herein lies the problem of today. Gas prices have surged to nearly 30-year highs. As of May 2022, the average price per gallon of all grades of gas was $4.55. 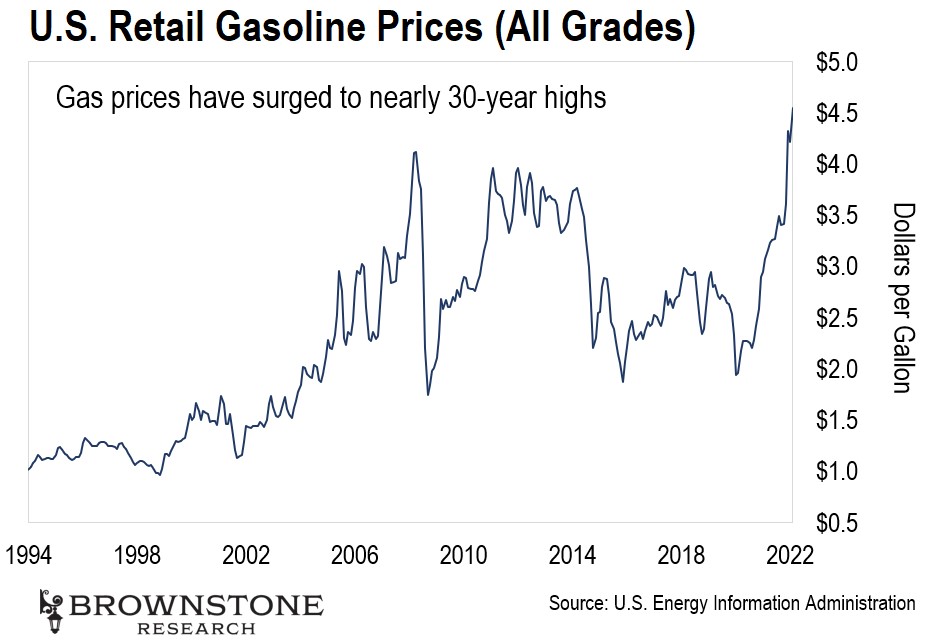 Now, let’s look at food. In the United States, the monthly cost of feeding one person is about $342.11. There are an average of 2.52 people per household. That means it costs the average American household $10,345.41 a year to eat.

So after just food and gas, nearly 20% of net income is gone.

Needless to say, these are just averages. So when food and fuel costs spike the way that they are doing, it’s a real squeeze on the average American.

Yet I believe some of this pain is intentional…

The Fed turned hawkish at the end of last year and made numerous allusions to aggressive rate hikes. That language persists to this day. However, at this time, the target Fed funds rate remains at 0.75–1.00%.

And while 50-basis point hikes at the next three meetings (as most expect) may sound aggressive, the Fed funds rate in 2019 just prior to COVID was 2.25%.

I still believe the Fed is enacting a policy I call ghost tightening. It’s using scary, aggressive language to shock markets into doing the heavy lifting. This way, as the economy cools, the Fed won’t have to raise rates as aggressively as it has threatened.

People have no choice but to pay for these things, which means they have less money to spend on discretionary items and speculative investments. That slows inflation all on its own.

And we see that playing out in real-time.

So as markets react daily to what the Fed might do in terms of rates, the smart money has been silently betting on the sectors benefiting from its ghost tightening policy.

Where the Money Is Going

No surprise, there have been huge amounts of buying in energy stocks since the beginning of the year. In fact, 24.3% of all buying spotted by my system has been in energy.

That’s why we’ve recently added several energy stocks to the Outlier Investor portfolio to tap into this trend. (To learn more, you can go right here.) 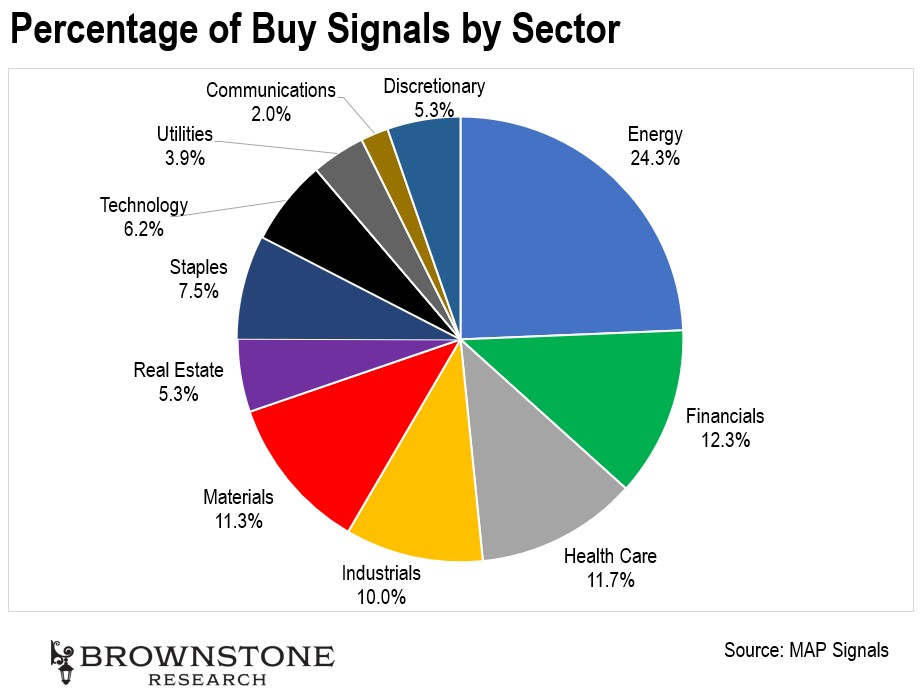 We can also see that in the chart below. The blue bars show unusual buying in energy stocks plotted against the Energy Select Sector SPDR Fund (XLE). 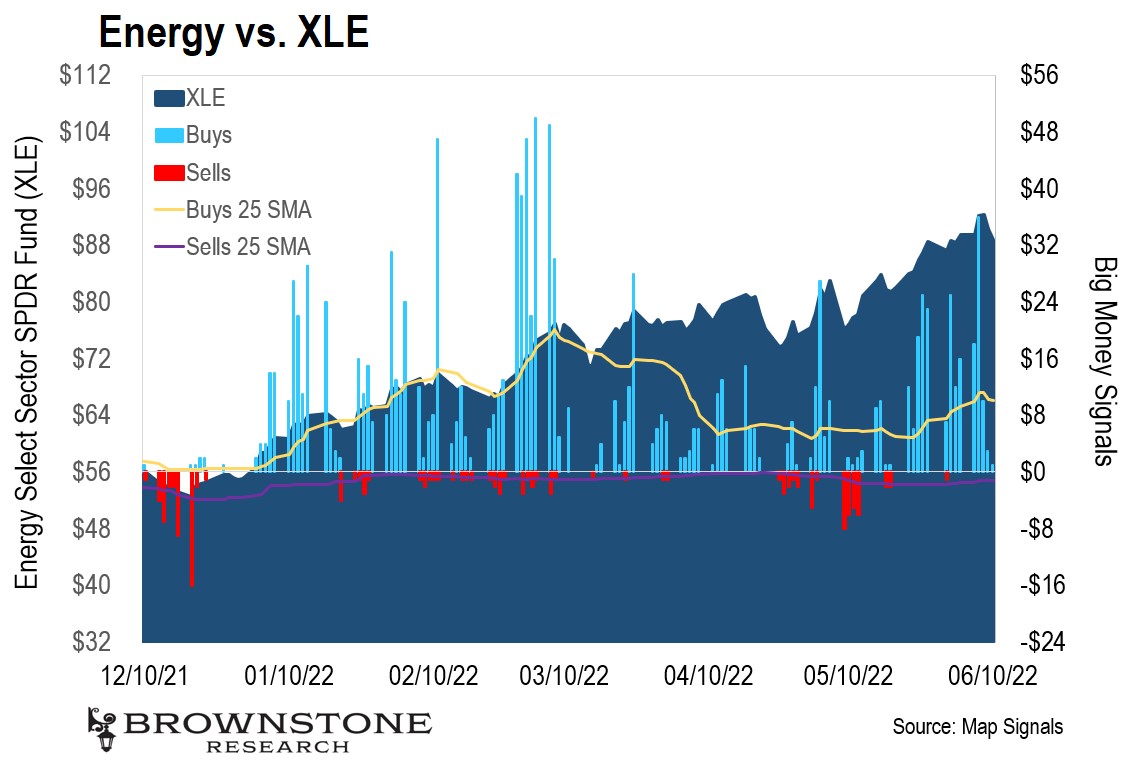 Just compare this to technology stocks, which have been getting obliterated in comparison: 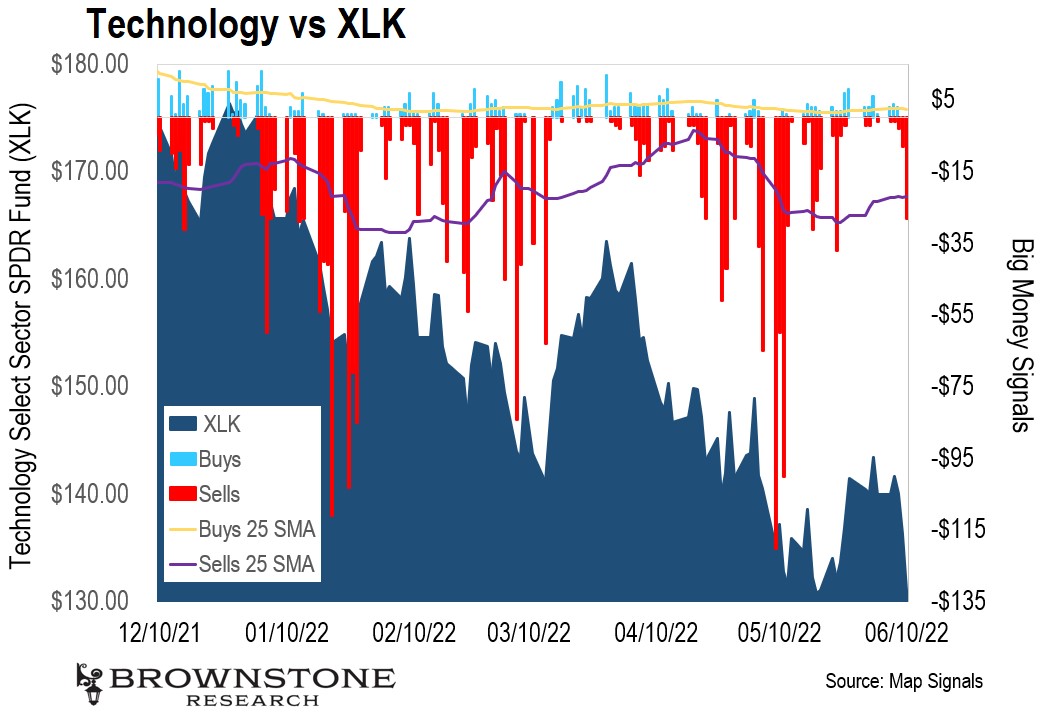 How long will it last? With all this buying in energy, we may think that we’ve missed the boat. Yet it seems that this trend is here for a little while longer.

The Biden administration did release some oil reserves back in March – 180 million barrels over the next six months. That’s good news. But we consume 19.8 million barrels a day, so these reserves are not giving us the price relief we really hope for.

Meanwhile, the administration continues to be committed to ESG (environmental, social, and corporate governance) initiatives, so I wouldn’t expect any new drilling operations to be approved or the Keystone pipeline to open up either.

So we’re stuck for the moment with high energy prices. For at least the near-term future, the pump will continue to say, “Hand over your wallet.”

Any investors who don’t already have exposure to the energy sector should consider adding some to their investments. An ETF like XLE is one easy way to do so.

That’s one way we can start to protect ourselves from our outsized costs at the pump and the supermarket.

Yet I’d also suggest a more contrarian play… While it’s easy to look at technology as a doomed sector for the near future, we’ve recently gone oversold at the end of May. (I wrote about that here for anyone who missed it.)

That means a relief bounce of over-punished stocks is imminent based on historical returns… and technology stocks have been some of the most punished.

We should position size appropriately for risk, but less conservative investors may find a tech play rewarding. If we’re prepared to hold through this period of volatility for the long term, these current levels look quite attractive for high-quality tech companies…