COVID put a stop to a lot of things.

The food, bar, and restaurant industry saw an unprecedented slowdown. The entertainment industry all but vanished. And Hollywood ground to a screeching halt.

Most things have made a full recovery since the pandemic ended.

But COVID spelled extinction for one thing in particular – the 24-hour business.

Unless you’re a night owl or you’ve had to make one of those unfortunate late-night trips to the pharmacy or grocery store, you may not even realize the 24-hour store is going extinct.

But some of the most notable 24-hour companies are no longer operating around the clock. Walgreens and CVS pharmacy locations across the U.S. cut hours back at numerous locations, leaving only the most financially feasible still open 24/7.

Many of the various 24-hour gym franchises also slashed hours during the pandemic and never went fully back to 24/7 after things cooled down. As one example, Planet Fitness cut its hours. Many of this fitness giant’s locations now operate 24 hours only four days a week.

And grocery retailers followed as well.

Hy-Vee cut the hours of its 24-hour stores. Meanwhile, Kroger, the world’s largest grocery retailer – which wasn’t even 24-hour to begin with – slashed hours at its stores, moving closing time from around 2–3 a.m. to 10 p.m. across the country.

Walmart is another one of the companies to never return to 24/7 hours after the pandemic ended.

The retail giant cut hours at its stores during COVID and has yet to return to 24-hour service – with no intention of ever doing so again. It is currently open from 6 a.m. to 11 p.m. at its 4,742 locations across the U.S.

And it’s arguably the most interesting of all these cases…

COVID Was the Perfect Excuse

Running as a 24-hour business was unprofitable for many companies like Walmart. For them, nightly staffing, electricity, and overhead cost more than the minimal business that nighttime customers were bringing in.

With online shopping and customer order pickups on the rise – where they bring your items out to your car – not as many customers were eager to run to Walmart at 3 a.m.

And they were looking for a way out of the cycle without making too much of a fuss with the public.

In fact, Walmart has been looking for a way to phase out the 24-hour store since at least 2015. Back then, Walmart tested the waters by changing hours at 40 of its 24-hour locations.

Then in 2019, the company began gradually shifting its hours at 100 stores in various places across the U.S. The stores changed from 24-hour locations to closing between the hours of 1 and 6 a.m.

Walmart discovered something interesting from this experiment. They could cut hours even more than they did at these 100 locations. They just had to figure out how to do so without creating disgruntled customers.

So COVID served as the perfect excuse.

And the COVID pandemic, mandated lockdowns, and forced business closures couldn’t have come at a better time.

And that’s been good news for Walmart…

Shorter hours spell better margins for big businesses like Walmart. And many are posting new highs on their margins as they shed away the clunky cost of a 24-hour empire.

Take a look at this chart:

This is each store’s earnings (before interest, taxes, depreciation, and amortization). These numbers were in a sharp decline for several years due to high costs to run and maintain stores.

Now, as of this year, Walmart is experiencing 10.35% year-over-year growth in this metric.

Walmart’s store profits are also on the rise since switching from 24-hour locations. This is due to a number of factors, but a decrease in nightly overhead and expenses was a significant contributor. 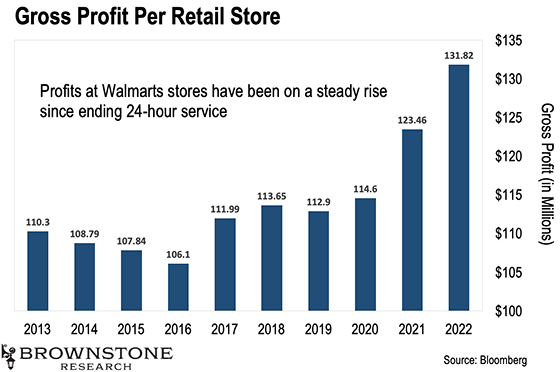 The End of an Era

Businesses are looking to trim the fat wherever they can in today’s competitive environment. Brick-and-mortar stores have slim margins that they’re constantly aiming to improve.

And now COVID has led to new paradigm shifts in how, where, and when businesses operate.

COVID doomed the 24-hour business. And with the current dynamic in the workforce – lots of openings and few workers – it makes sense to reduce or remove nighttime schedules and graveyard shifts.

And as we can see from Walmart’s example, this has allowed big box retailers to finally shed the costs of a 24-hour store.

While this alone may not be make-or-break for some of these stores, it does give us a good reason to take a look at these companies as investments.

Now, Walmart has been punished due to inflation and has pulled back over 16% year to date. Less discretionary spending has led it to cut its profit guidance. And the bad news headlines may make some investors reconsider.

But this will be a temporary situation… Once the economy recovers – which I believe could begin as soon as Q4 this year – Walmart’s moves will only reinforce a stronger bottom line.

And do we really think Walmart is going away? No. So this kind of pullback is a reasonable buying opportunity for anyone who has been looking to build a long-term position.