The Fed met last Wednesday and issued another 75 basis point (BP) rate hike. It also shared that “another unusually large increase could be appropriate at our next meeting.”

This comes after numerous increases already this year.

The Fed still hopes for a “soft landing” of the U.S. economy, and Fed chair Jerome Powell doesn’t think we are in a recession just yet.

But the mainstream media is preaching otherwise.

After all, the American consumer is getting squeezed in nearly every way. Across the country over the last year, food prices are up 10.4%, gasoline is up around 60%, and electricity bills are up 13.7%.

The average American feels like they’re standing at the gates of the next great recession.

So today, I want to tell you where we’re really at – without all of the media rhetoric.

We Are Actually Below Average

Despite all of the large interest rate hikes, the current Fed Funds target rate of 2.25% to 2.5% is actually lower than the average rate in the U.S. for decades. 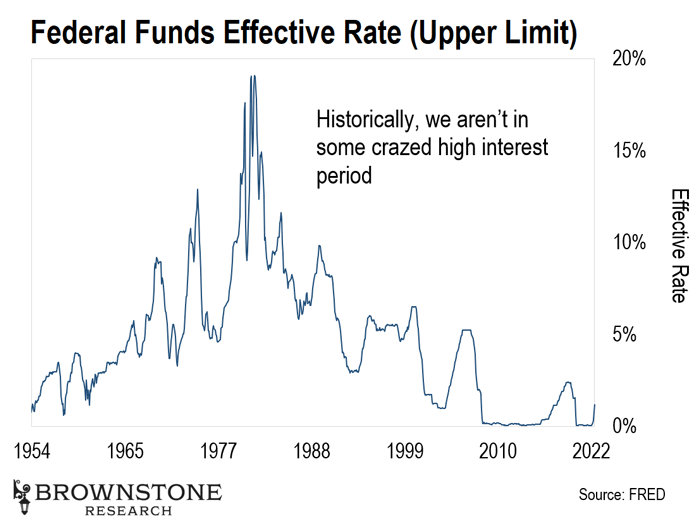 As you can see from the graph, historically we aren’t in some crazed high interest period.

Many of us may have experienced what runaway interest was like in the late ’70s and early ’80s when interest rates commonly surpassed 20% on homes and cars.

Yet our current situation is far from those highs…

So, what’s happened is this… We’ve gotten spoiled with these periods of exceedingly low rates.

There are a couple of key periods we need to pay attention to on this graph that have skewed the public’s perception of interest rates and allowed the media to throw the American consumer into a frenzy:

Both these periods circled above are outliers. They are irregularities spurred by the Great Recession in 2008 and the COVID collapse in 2020.

And as we can see between them, after the Great Recession ended and the economy smoothed out, rates began increasing once again.

That is… until COVID forced the Fed to kick the rates back down.

The graph above began 68 years ago. Of the 816 months that have passed in that period, only 138 have been at near-zero outlier rates (outlined in the green circles in the graph).

That means, prior to 2008, only seven months experienced a near-zero rate. In sum, 95% of these outlier months have happened in the last 14 years.

That has skewed our sense of what’s usual…

What we need to understand is that near-zero levels of interest aren’t normal.

And clearly, judging by inflation and runaway prices, near-zero rates aren’t sustainable either.

Inflation was able to run so rampant because money has been nearly free to borrow for so long – not to mention the stimulus checks that instantly injected $931 billion into the U.S. economy. 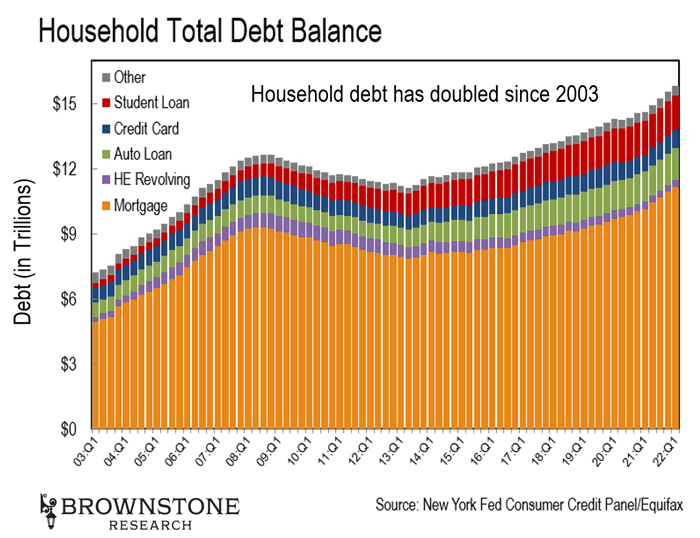 And corporate debt (nonfinancial companies) has likewise risen to an all-time high of nearly $12 trillion as of June. That’s nearly triple what it was 20 years ago.

This is exactly why the Fed’s solution is to make borrowed money more expensive to get.

If they raise interest rates, money costs more to borrow. This leads to less borrowing, tempering runaway prices, and a cooling of the economy. That’s the soft landing Jerome Powell keeps discussing.

What we are witnessing right now is extreme inflation with the Fed walking a tight rope with each rate hike… aiming to bring the economy back to balance.

And the truth is, the Fed doesn’t like high-interest rates either. The U.S. has over $30 trillion in total public debt.

At the current Fed Funds rate, the U.S. government will be paying out between $688 and $765 billion in interest over the next year – that’s if they held rates constant. For scale, the entire U.S. defense budget for 2023 is set at $773 billion.

If the Fed did another 75 BP rate hike, that would mean they’d be paying out $994 billion in interest.

So in the short term, rates will stay elevated and could go up even more at the Fed’s meeting in September.

But because of the massive national debt and accompanying interest payments, we will likely see rates taper back down in the first quarter of 2023.

That means we’re not going to extreme levels… and we can expect inflation and rates to eventually reach a new equilibrium.

What This Means for Us

People are afraid of a recession. But if the economy does happen to recede mildly, we have to contextualize it.

Just as interest rates have been unusually low lately… Economic growth has been abnormally high in recent years. That’s influencing much of the current fear.

Everyone is fixated on the pullback – not the net gain we’ve experienced.

Right now, we are not in a recession. The labor market is strong. Analysts aren’t cutting estimates. Even consumer spending is still strong and rose more than expected in June.

So let’s continue to stay rational rather than giving into the negative narrative. I still expect Q4 this year to return the stock market and economy to a much steadier and even bullish state.