A friend of mine recently got a phone call. When he saw the caller ID, he didn’t want to pick up, but he also knew he had to. It was his broker.

My friend manages a small hedge fund. As such, he doesn’t use a normal broker like Schwab, e-Trade, or Robinhood. Instead, he uses the services of a “prime broker” (PB).

Put simply, a PB offers financial and custodial services for professional investors. It holds the assets for hedge funds and other investment vehicles. It also lends stocks to trade on margin.

And that’s what the call was about.

But hedge funds often want the ability to be long or short. Shorting is simply borrowing shares you don’t have and then selling them. Usually, one does this in hopes of buying it back lower. Then we can return the shares back to the broker and keep the difference as a profit or loss.

This is one type of leverage – trading a borrowed asset.

Additional leverage can be obtained by trading on borrowed capital.

You’ve likely heard of margin. In this case, the broker lends a trader money. The trader takes the capital and buys (or sells short) securities in excess value of the capital they have.

This works great when your stock goes up. But if it comes down, you’ll need to add money to keep your account at the minimum collateral level. Otherwise, the loan is called back… forcing a sale of some stock.

So margin doesn’t work so great when your long stock goes down.

And the other day, my friend’s phone call was about his use of margin…

As luck would have it, my friend doesn’t really use leverage. Some hedge funds leverage up two or three times their capital base. Some currency and bond funds can get as high as five or even 10X!

In comparison, my friend’s fund was using a 6% margin. For every million dollars of capital in the fund, he was borrowing $60,000. That is hardly any leverage at all.

But the phone call informed him that the PB no longer wanted 30% or even 50% margin collateral.

No, they now wanted 100% – which effectively meant margin was no longer available. He needed to cover the loan balance ASAP.

Given his minimal use of leverage, it was a simple transaction. He laughed when he told me about it. But it should get us thinking.

If a tiny fund using tiny leverage was getting a margin call, what implications does that have for big funds using big leverage?

Well, the implications are muchbigger, for sure.

It means forced liquidations have been happening all over the place in May 2022. Portfolio managers are being offered a choice… They can deposit more money to meet margin requirements, or else the PB will liquidate the managers’ securities to meet minimum margin maintenance.

And in a downward spiraling market, some funds aren’t even being given that choice. They are simply being told “no more margin.”

That means mandatory liquidations. And naturally, that seems to always happen at the worst possible times…

My friend used only a 6% margin. Yet we can imagine how different that scenario looked to a fund using 300%. A 10% drop in the fund value equals an actual drop of 30%.

God forbid a fund is levered 10X. A drop of 10% wipes out the entire fund. In this wildly volatile market, it can easily happen. As just one example, the 10-year Treasury can be levered 10-1 in some places due to the perception of less risk in that asset.

Yet the bond sank 10%+ among recently exploding yields. We can see that here with the fall of the iShares 7-10 Year Treasury Bond ETF (IEF): 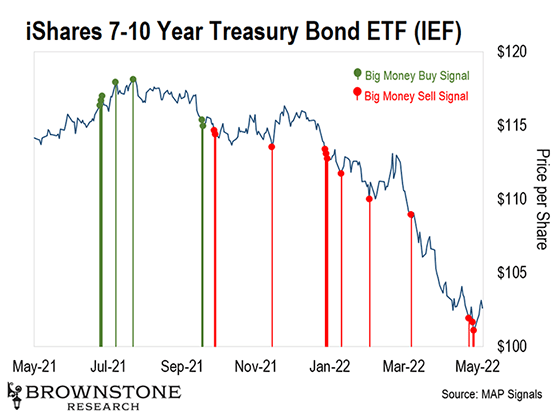 Now let’s imagine a fund focused on the best-performing assets available. Technology easily comes to mind when thinking of outsized winners over the past several years.

Investors seeking to outperform a benchmark often focus on trying to identify alpha (return above a benchmark index). He or she might pick different stocks to achieve outperformance, justifying their management fees.

But another option is if a fund simply levers its capital 3X.

By investing in Invesco QQQ Trust Series 1 (QQQ) with all that capital, a money manager could outperform it by a factor of three… assuming QQQ kept going up.

It’s a crude example, but the Nasdaq has been doing exactly that for many years.

Any hedge fund manager will tell you that annualizing a 20% return is not easy. Some say the only way to beat it requires the use of leverage.

So leverage has grown in a very big way since 2009. We can see this in a chart of margin debt, as reported by FINRA: 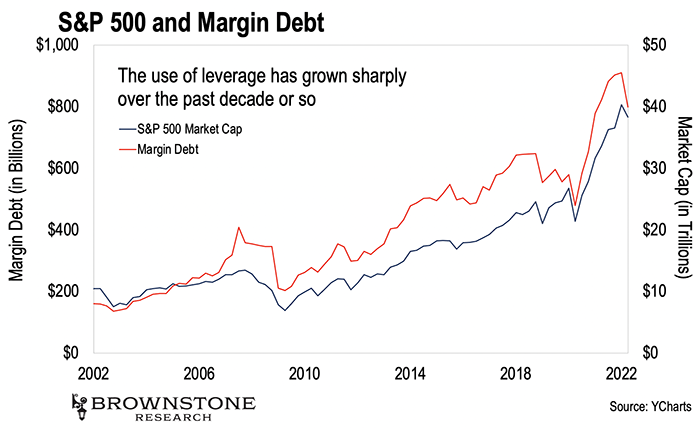 That’s why the market has been on such a big slide lately. More and more phone calls like the one my friend received have been happening lately. And leverage is finally coming out of the market.

And until those phone calls stop, we can expect this market volatility to continue. Right now, the BMI is at 29.8%, which means it’s heading closer to hitting oversold (when it reaches 25%). So we’re nearing that point. And based on that data, we can expect to see a bounce finally hit somewhere around June 1.

This is one more reason I’ve been encouraging readers not to sell into this market panic.

And on Thursday, I’ll continue to examine the current state of the market by answering a couple of big questions…

What caused such a rise in stock prices and margin debt? And why have tech stocks in particular been punished so harshly?