When inflation is raging at 9.1%, the American shopper isn’t spending money on what economists call “consumer discretionary items.”

These are desirable yet non-essential items like clothes, luxury goods, toys, game consoles, and furniture – the things we enjoy buying when there’s a little extra cushion in the wallet.

But right now, people simply don’t have the extra money to spend on many items like this.

And the Consumer Discretionary Select Sector SPDR Fund (XLY), which tracks the overall sector, is down 27% so far this year. 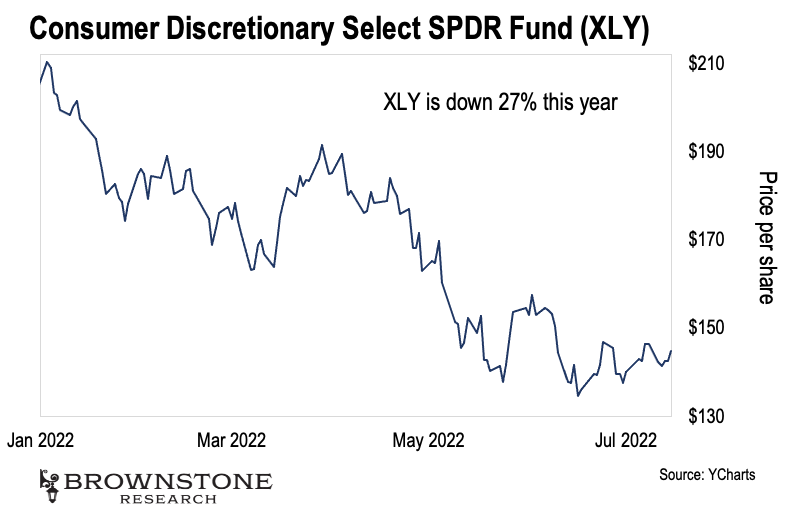 As a result, big box retailers are down big. Giants like Walmart (WMT) and Target (TGT) have tumbled double digits this year. 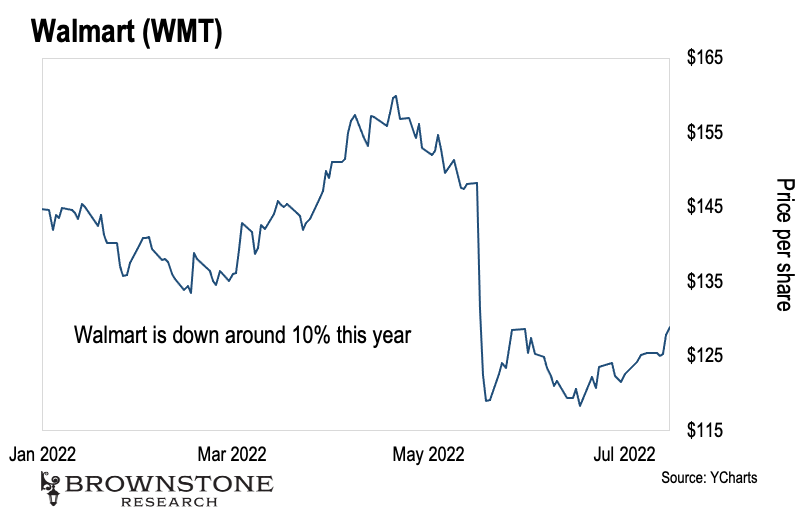 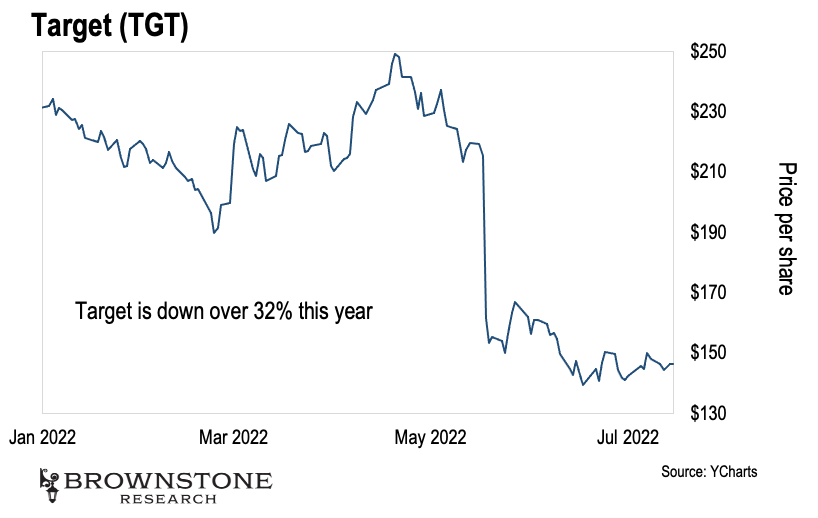 And there’s one other “similar” company that’s also been feeling the pain this year… Amazon.

And Amazon has been lumped together and punished with these big box retailers. After all, many of us turn to Amazon to order everything from computers and gaming systems to home décor, clothing, and jewelry – and beyond.

But that completely misses the mark on Amazon. And viewing it as just the internet big box retailer couldn’t be more wrong.

Amazon Is a Busy Company

Amazon is being unfairly punished.

And one big reason is because it’s the largest holding in the consumer discretionary sector. Amazon makes up about 15% of the overall sector.

So when people sell out of consumer discretionary, Amazon gets hit along with the Walmarts and Targets of the world.

Yet labeling Amazon a consumer discretionary stock and calling it a day leaves out a big part of the picture.

Amazon earns revenue from many different areas of business.

It regularly looks for new businesses to expand its reach. For instance, it bought Ring home security systems back in 2018 and helped popularize its products.

Many of us may have visited someone with a Ring doorbell – if we don’t have one ourselves. Across the internet, we are now seeing videos of this tech stopping burglaries, car thefts, and would-be kidnappers.

Needless to say, Amazon is involved in a lot of things. And significant portions of its revenue don’t rely on consumers’ discretionary spending. 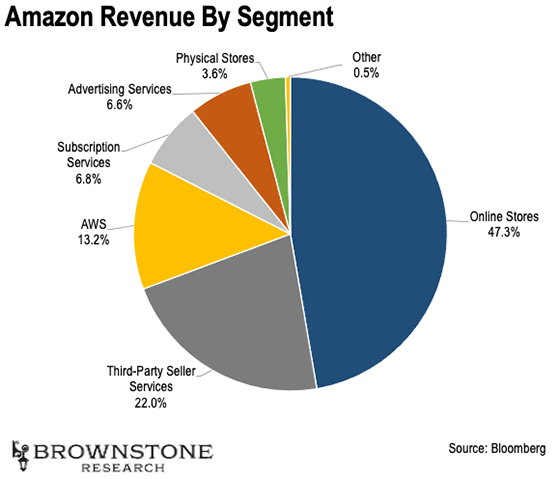 In fact, Amazon is also a tech company. Its Amazon Web Services (AWS) segment is responsible for over 13% of Amazon’s revenue. It is the biggest cloud provider in the entire world, and its revenue is growing 37% year over year.

AWS controls over 33% of the cloud services market. Its biggest competitors, Microsoft and Google, only control 18% and 9%, respectively.

To top that off, 5.8% of the overall internet runs on AWS – just think about that for a second. That may not sound like much at first. But having nearly 6% of the internet running on your systems is a big deal – and that number is growing.

Critically, AWS revenue isn’t going to be significantly affected even if we do end up in a recession (which I’m not yet convinced is certain).

And that’s not all. Amazon is also the third-largest digital advertising platform in North America behind Google and Facebook. In 2021, Amazon brought in over $31 billion in ad revenue on its platform, a 32% increase over 2020’s numbers.

Advertisers may slow their purchasing during a prolonged recession, but this is one business segment that will likely remain steady. In the 2008 recession, the advertising market declined 13%… but within that, digital ad spending fell only 2%.

And let’s not forget that, even within its online selling, Amazon isn’t feeling too much pain yet. The Amazon Prime Day earlier this month raked in roughly $12 billion – its biggest year to date and about $1 billion more than last year.

The big picture here is that investors are being way too pessimistic about Amazon.

The company is well diversified so that no matter what happens, it will continue bringing in some serious bank.

Amazon Isn’t a Company to Run Away From

Amazon isn’t a company we should be afraid of or running away from.

The market has unfairly punished Amazon and driven its price down under a wave of bad headlines… much like the other FAANG stocks I’ve written about here and here.

Take a look at Amazon’s performance this year: 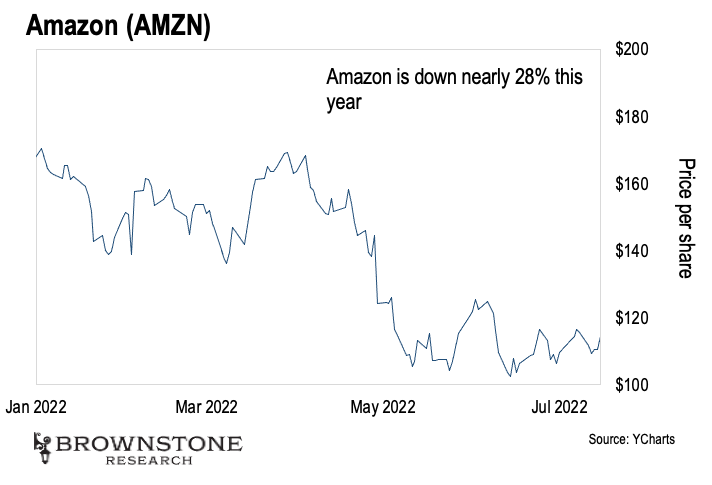 The company is down nearly 28% this year. But frankly, that presents us with a great buying opportunity.

Below are the Big Money buy and sell signals for Amazon from the past seven years. While we might be frightened by the recent sell signals, that often indicates a great deal when it’s a company as strong as Amazon.

And as we can see, Amazon has had periods of heavy selling before. Yet over the long run, it has always been able to march higher. 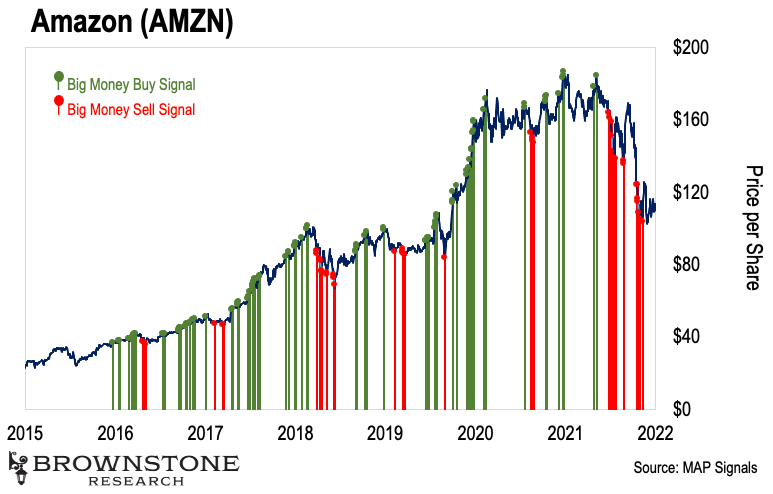 And I don’t see any reason this time will be different.

To top it off, Amazon recently did a 20-for-1 stock split.

Now, this doesn’t change the valuation of the overall company for investors. But having $100 share prices as opposed to shares trading for several thousand dollars is a lot more attractive to retail investors. So stock splits can encourage more investors to jump into a company.

Amazon is a company to watch closely. And it wouldn’t be a bad idea to look at buying a few shares of Amazon (AMZN) on some of these pullbacks we are seeing in the markets.

Its next earnings report is currently scheduled to take place next week on July 28. If it manages a beat, the market could quickly return to bullish sentiment on this stock.

And ultimately, when we look back a year or two from now, right now could prove to be an absolute steal.