Humans have a funny way of turning perception into reality… even when our perceptions aren’t factual.

We picture Adam and Eve’s forbidden fruit as an apple even though texts don’t specify. Einstein didn’t flunk school. Napoleon wasn’t all that short. And a penny dropped off the Empire State Building won’t kill you.

But why let facts get in the way of a good story?

I’ve been feeling this way for much of 2022. Don’t get me wrong… Stocks sinking coupled with inflationary fears and war are very real things.

But is it possible that the media stories stirring up fears have taken on a life of their own? I believe so.

I’ve been talking for some time about the ghost tightening employed by the Fed.

Starting late last year, the Fed used scary language to telegraph that it would tighten the economy. The threatening language alone was enough to remove the froth in tech stocks and cryptocurrencies.

All stocks sank in February, even though the first-rate hike didn’t even occur until mid-March.

The second-rate hike took place in May, and by this point, the target rate was still only 1%.

This paved the way for the margin debt bubble to pop (see my previous essays here and here). 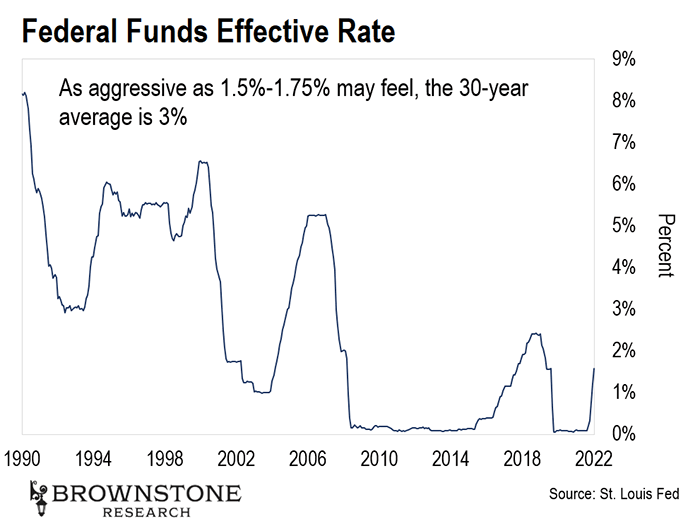 And it’s all to fight inflation. As the headlines tout the vicious inflation numbers, we all feel it at the pump and grocery store.

But the fact is core inflation (inflation outside of food and energy) is falling. So it is mainly isolated to essentials for Americans, which really helps cool an overheated economy.

Everyone’s got to eat and drive to work to pay for the food. With higher prices here, that leaves less for discretionary items.

That, in essence, is ghost tightening. Telegraph scary language and let the market do the heavy lifting for you.

That’s exactly what I would do if I were the Fed – because with a $30 trillion national debt, I can’t raise rates too high. That would cripple the U.S. economy for far longer than some temporary inflation.

That’s what I really think is happening behind the scenes and headlines of doom and gloom.

That’s why I believe for the third quarter stocks will bounce around a bit. The Fed will have two more meetings to raise interest rates, and then I believe they will stop.

November’s meeting is an election month, and the Fed doesn’t want to interfere with elections.

By that point, we should have solid data of slowing inflation, and energy prices should seasonally start to fall. I believe the Fed will enter in a holding pattern. And I believe the economic data will improve.

That sets up for a big fourth quarter lift of stocks… especially over punished growth stocks.

Is it possible that investors are starting to agree with me?

First and foremost, our most powerful indicator – which has happened only 21 times since 1990 – recently fired not once but twice!

The Big Money Index (BMI) went oversold on May 24th and again earlier this month.

Our 30 years of data says when the BMI hits oversold, we should expect a bounce in stock prices. Well, sure enough. That’s exactly what has happened. 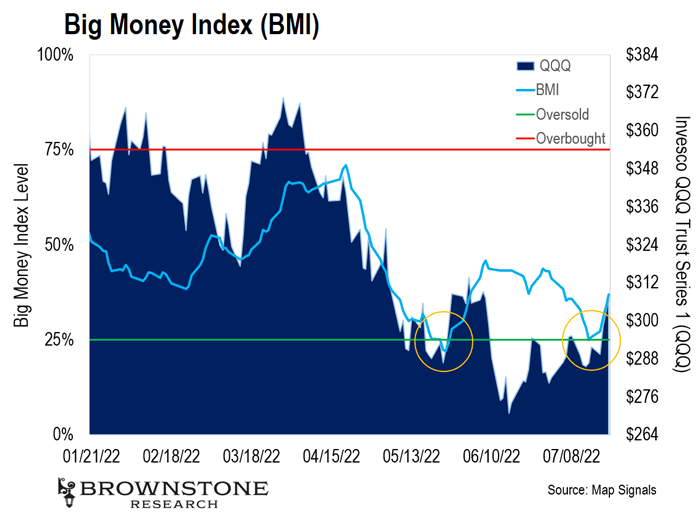 Since June’s devastating selling, the sellers have mostly gone away. And we’re starting to see little shoots of stock buying, as you can see here: 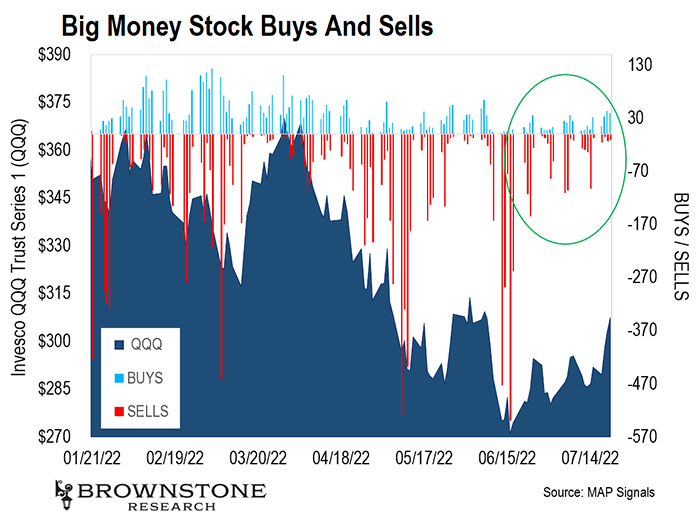 And when there is immense ETF selling, bottoms are near. As of right now, that looks to be the case. Selling has pulled back substantially from the extreme levels we’ve been seeing: 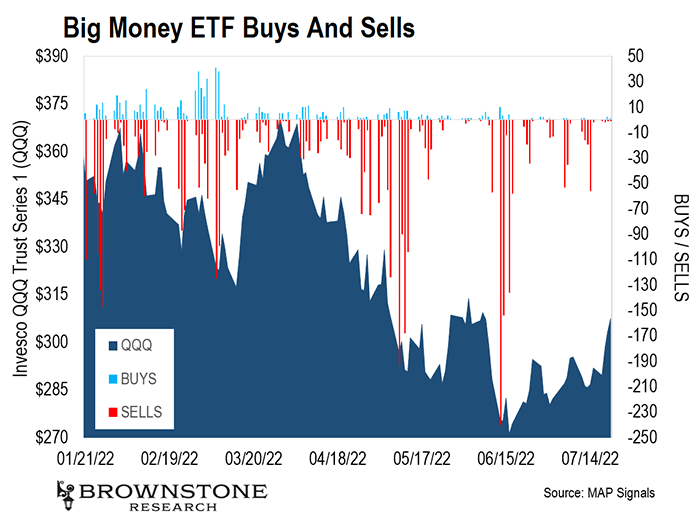 So small buyers are stepping in as sellers step out of the way.

For the first time in a long time, we are seeing little bursts of buying in both tech and discretionary stocks – the least loved sectors since before Christmas.

On the flip side, energy has been the best performer by far of 2022. Yet in June and early July, we saw heavy distribution. Now that selling has vanished.

And we see recent big inflows into health care… In fact, last week saw health care account for nearly half of all unusual institutional buying: 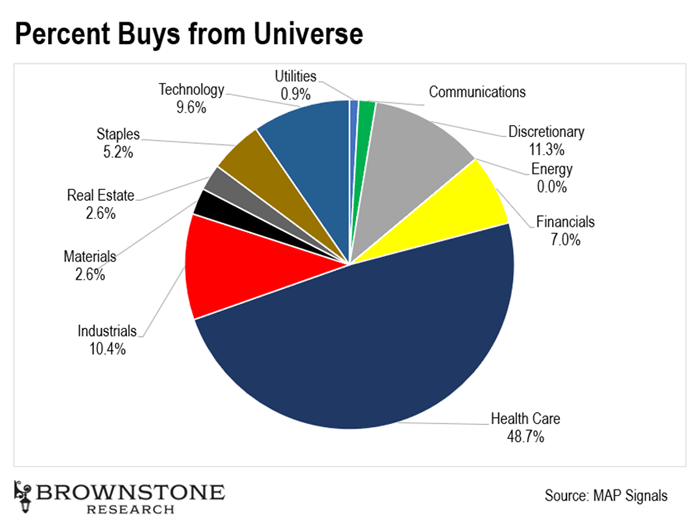 And this is helping boost health care in the sector rankings. It’s now third behind energy and staples with a very strong fundamental basis.

So on a sector level, we’re seeing some returning interest to more growth-focused areas…

Light at the End of the Tunnel?

While the rhetoric is as loud as ever – stories of inflation, interest rates, war, food and energy costs – perhaps investors are starting to catch on that there’s a light at the end of the tunnel.

We will continue to keep an eye on buying as we head toward the fourth quarter this year… If buying shifts more toward growth areas, like we’re beginning to see, then the markets could be starting to reverse out of this bear market.

The S&P 500 is still down over 17% so far this year. But if a shift starts to happen, I expect we could finish out this year flat or even back into green territory.

So that’s what we’ll be watching for in the coming months… No matter what sentiment says, I suspect we’ll still have a lot to look forward to this year.