News is constantly terrible. Inflation is getting Americans “really, really down,” in the words of President Joe Biden.

And just when things started to look up, down we went.…

The Big Money Index (BMI) went oversold on May 24. That’s my proprietary system for tracking institutional money flows. When the BMI goes oversold, it means stocks are grossly oversold and will likely rally thereafter.

But then everything changed… 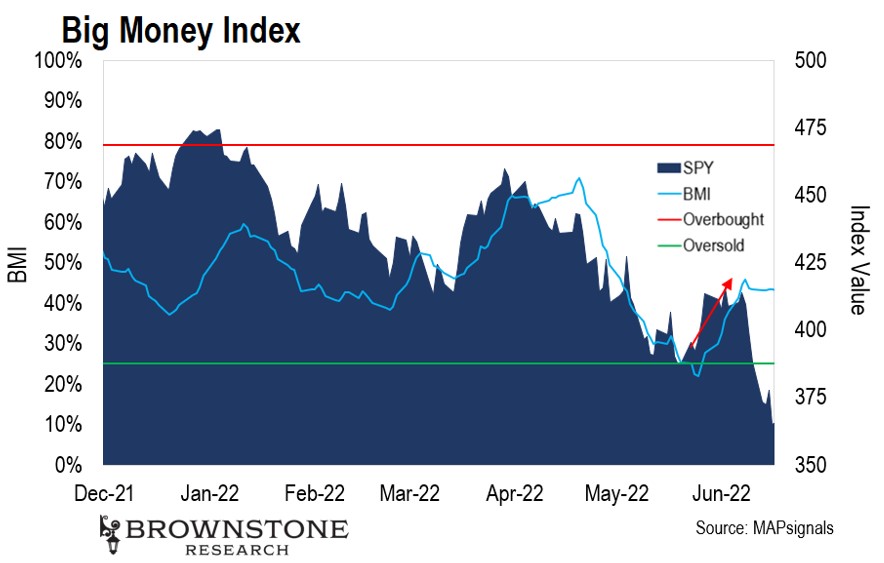 And then selling got downright violent last Thursday as Switzerland surprisingly raised its interest rate by 50 basis points and the U.K. raised its rates for the fifth consecutive time.

Inflation fears have become a foregone conclusion – at least as far as investors are telegraphing.

But there is a silver lining… Stocks are getting ridiculously oversold. The selling we’ve been seeing is starting to look a lot like capitulation.

Capitulation usually comes when sentiment is lowest. And the consumer confidence report that came out earlier this month was the lowest in decades.

So today, we’ll go over why I think things could soon turn around…

Everything Is Being Sold

Much of the market selling this year has been rotational in nature.

For instance, as technology shares were sold, energy was bought. Financials were bought as industrials sold. The market was like a washing machine with money sloshing all over the place.

But selling last week saw correlation go to one.

In other words, everything got sold.

In fact, on Thursday, June 16, there were only two buy signals vs. 539 sells. You can see here how buying was just absent:

When we look below the surface at the sector action, we can see investors throwing in the towel.

All 11 sectors saw chunky selling. That includes the market’s brightest spot since the beginning of the year – namely, energy. Every sector saw huge selling and essentially no buying.

That’s what capitulation looks like… when everything is sold, in concert, in a big way.

So we had huge stock selling in all 11 sectors. And it was the same story with exchange-traded funds (ETFs).

That includes the pandemic, the Great Financial Crisis, and everything else. 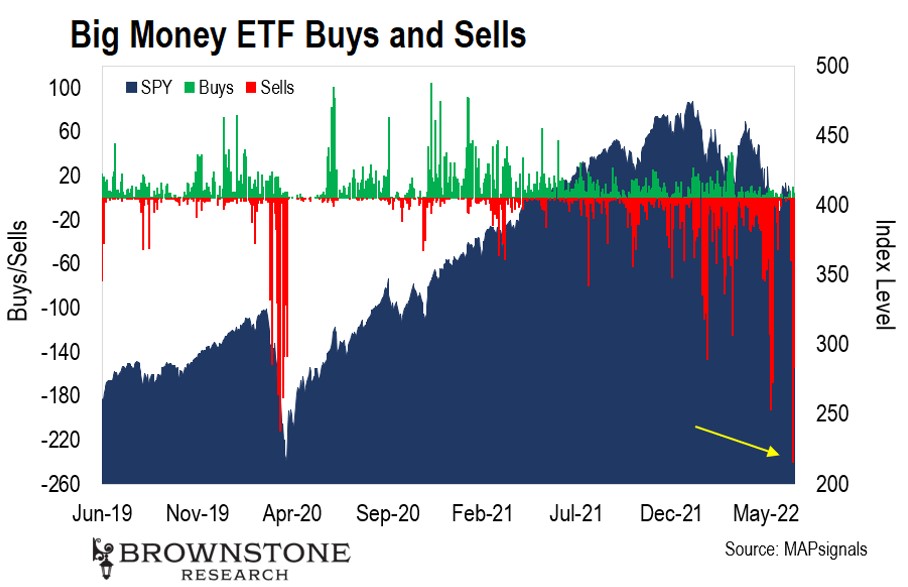 ETFs getting whacked is yet another clear indication of capitulation – high volume selling in all areas of the equity market.

That’s the bad news. But there is a bright side to this kind of selling…

The good news is that, historically, when we see selling like this, it usually looks up from there.

Below, I took all days of 100 or more ETFs being sold going all the way back to 1990. The forward returns are great:

Some readers may protest that this time is different.

Yet while there is much uncertainty over the future macro conditions, the language that Fed Chair Jerome Powell used last Wednesday was encouraging for a few reasons.

He acknowledged that price stability and 2% inflation is the core goal. He also telegraphed that a recession is not a forgone conclusion at this point. He made it clear that the Fed is committed to getting these extraordinary circumstances under control.

President Biden echoed Powell, saying negative sentiment doesn’t mean that there will necessarily be a recession.

JPMorgan’s Chief of Macroeconomic Research likewise reiterated his stance that there will not be a recession this year and his assessment that the S&P 500 will reach 4,900 by year-end.

So not everyone is bearish. And as equities get continually sold, we grow ever closer to a real bottom.

As investors, we should view that as one of the best setups for buying…

And as I just showed, ETFs are signaling a bottom is near.

Naturally, these are difficult times. Uncertainty is the hobgoblin of markets.

But let’s look at how far we’ve come…

At the beginning of the year, speculative asset bubbles popped. That paved the way for margin debt balloons to be deflated.

And as I’ve covered, froth and leverage have now gotten cleaned out of the system. That puts the market on a firmer footing to build a new base on.

Now we face uncertainty over mortgages, as credit is freezing up in that market. Yet as soon as there is an indication of clarity in that space, we can expect markets to respond positively.

And as we see inflation start to cool, market volatility will calm down.

As I mentioned on Tuesday, Yardeni Research released a positive report amid all this fear of a slowdown. Earning analysts still have not cut earnings estimates.

Profit margin estimates are edging down for 2022 and 2023, but the forward profit margin rose to a record high.

So rather than falling into a spiral of negativity, I’d encourage readers to be contrarians and look for the positives. Believe it or not, there are several.

And as quickly as we’ve seen markets fall in the first half of this year, we could see things begin to recover in the latter half.