The daily negative news can be overbearing. I find each day the cumulative headlines just put me in a bad mood. And as a financial professional, the market news is generally just miserable.

But how bad are things really?

Today, I’m going to try and identify some bright spots by looking at cold, hard data…

Last week, Fed chair Jerome Powell announced the Federal Open Market Committee (FOMC) decision to raise the Fed funds target rate by 0.75%. This was largely expected, and the market had already rallied by the time the announcement was made.

But then things went into overdrive during Powell’s press conference and Q&A.

To summarize, he does not see the U.S. currently in a recession. There are areas of the economy that are just too strong.

He cited a strong labor market with a high supply of jobs outnumbering lower demand. And he attributed much of the inflation pain to the food and energy sectors.

Powell also reiterated a commitment to getting inflation back to a target rate of 2% to encourage strong labor growth and a vibrant economy.

The market cheered this news. And one might seemingly think this was the catalyst for higher prices. 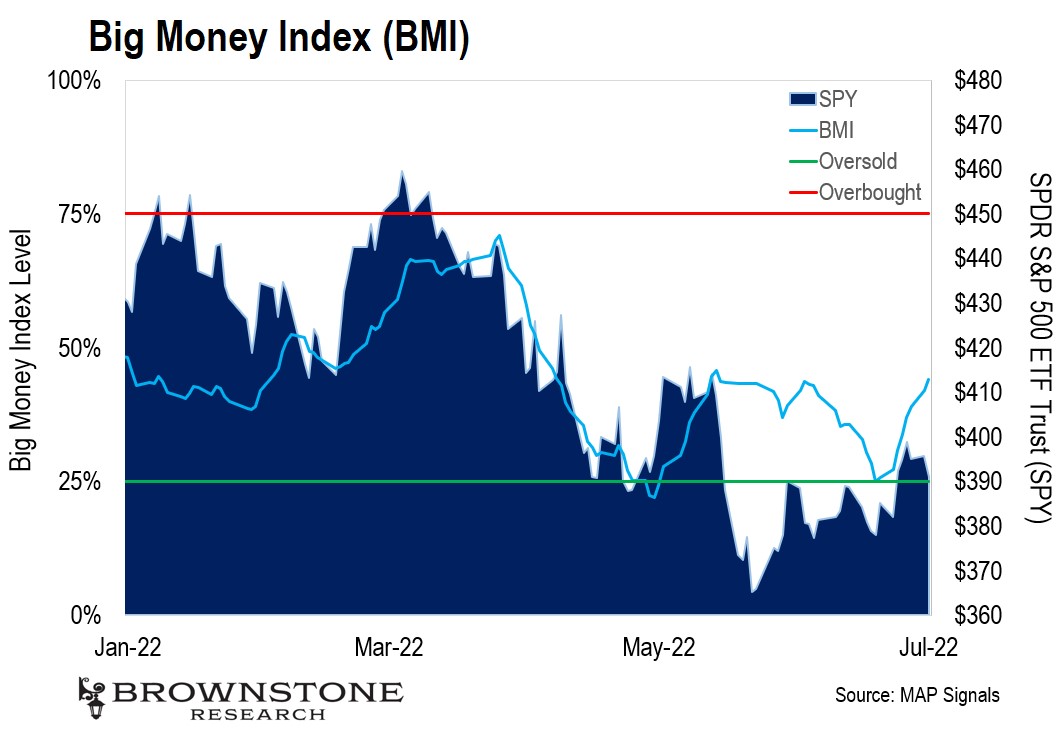 And the market has actually been in a gentle uptrend, as volatile as it may be. Generally that can’t happen in an environment of high selling.

In fact, unusual buying and selling of stocks has shown a shift recently. Look how selling has dried up dramatically: 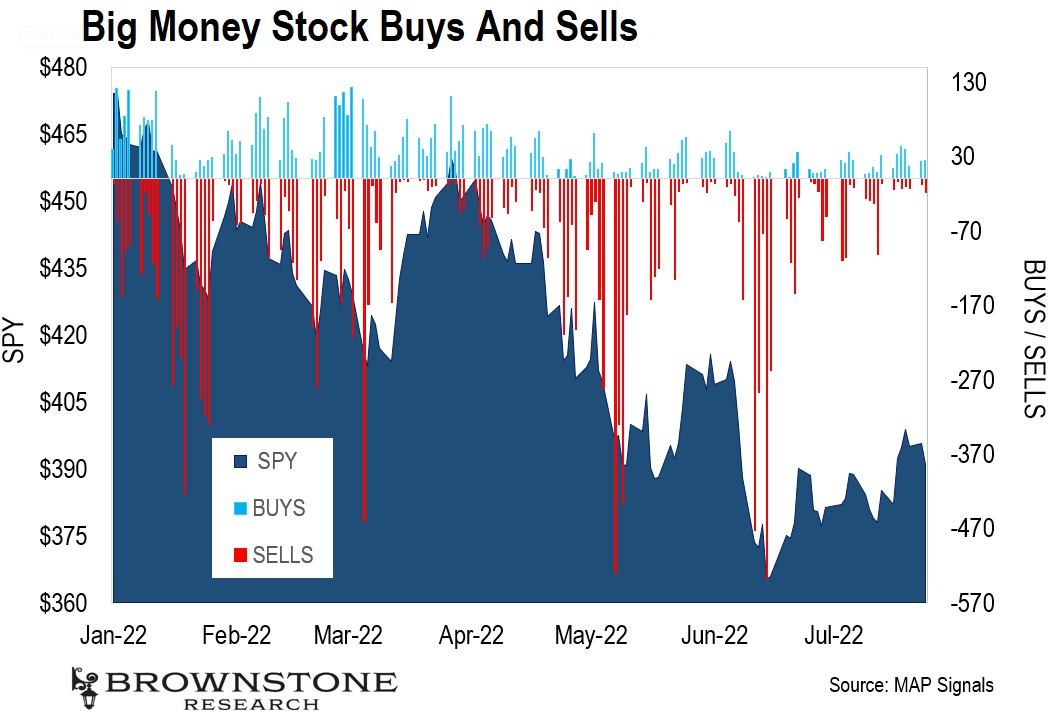 Those red bars of violent selling hit their peak in June and have been slowly abating ever since.

And Powell’s comments left us with the most buying we’ve seen in a while.

Interestingly enough, we see this same type of behavior in exchange-traded funds (ETFs). ETFs can be thought of as a yardstick for retail investment activity.

That’s because financial advisors and wealth planners often aggregate client assets and invest them in thematic or sector ETFs. 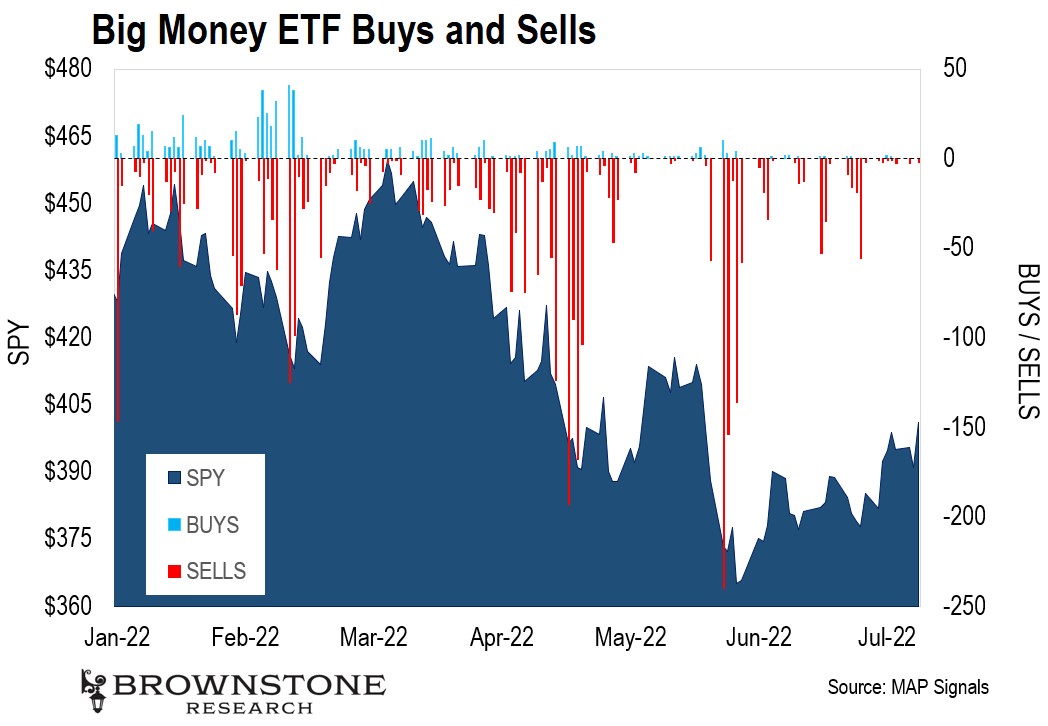 While there’s no real buying to speak of, we can see clearly that the red selling lines up with troughs in the market. And here too, selling has been dwindling since the June peak.

So we can now see, well in advance of the Fed meeting, the market was getting in shape for a more optimistic tone.

And also important is what is getting bought under the surface…

For the better part of most of the year, energy stocks were the only bull market around.

And this makes sense with the monstrous spike in the price of oil. Compared to a year ago, energy companies stand to make huge windfall profits.

In fact, earnings are coming out at near record levels, prompting phenomenal announcements like huge buybacks and the potential for special dividends.

But once again, the smart money knew in advance, as we can see here in this chart: 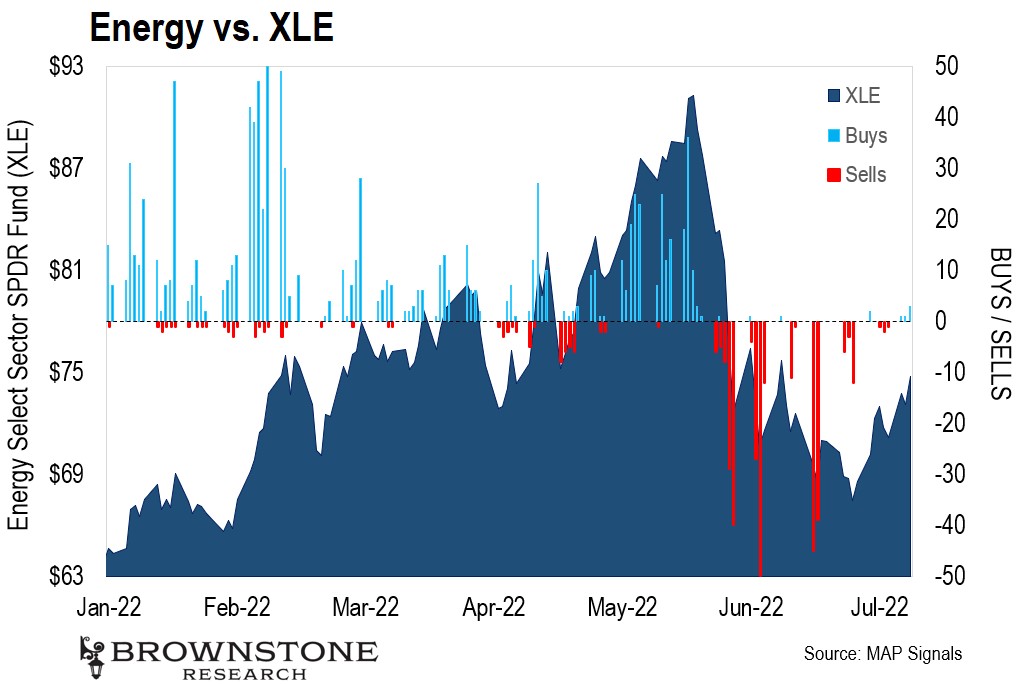 That trend clearly met some significant profit taking in June and July. Yet recently, we’re seeing fresh signs of small buying creeping back into the energy space.

But what I find most interesting is that prior winners that have been beaten to a pulp are starting to finally get scooped up.

Let’s just look at recent buying activity. It has been a long time since we have seen technology shares have any decent slice of the pie. 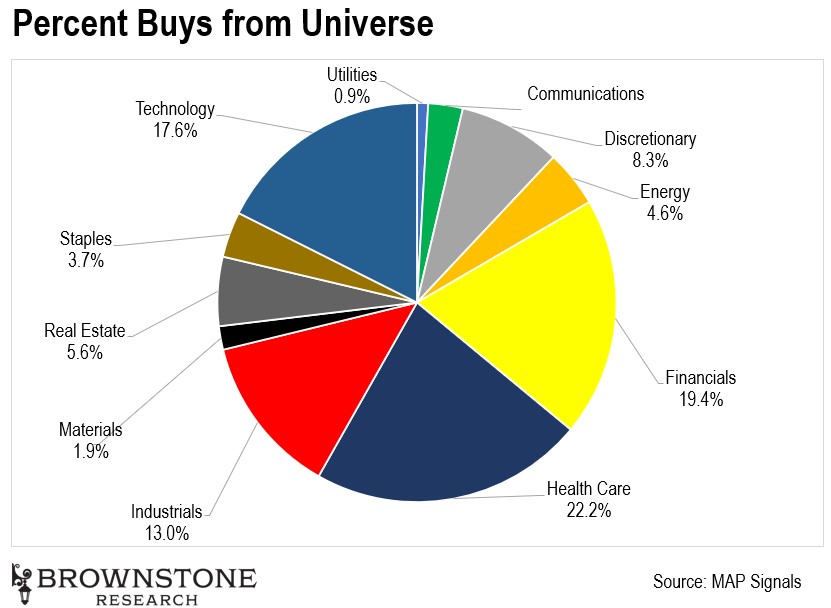 Tech and growth stocks are finally starting to get a little love. In fact, on the heels of the Fed’s announcement and subsequent comments, we saw the most tech buying all year.

Could it be that things are not as bad as the news makes them? I believe so.

And perhaps the market is finally agreeing with me too…

What Bonds Tell Us

Another place to look at is the 10-year Treasury yield.

It has been collapsing from its peak earlier. What the chart below shows us is that investors are rushing in to buy bonds. 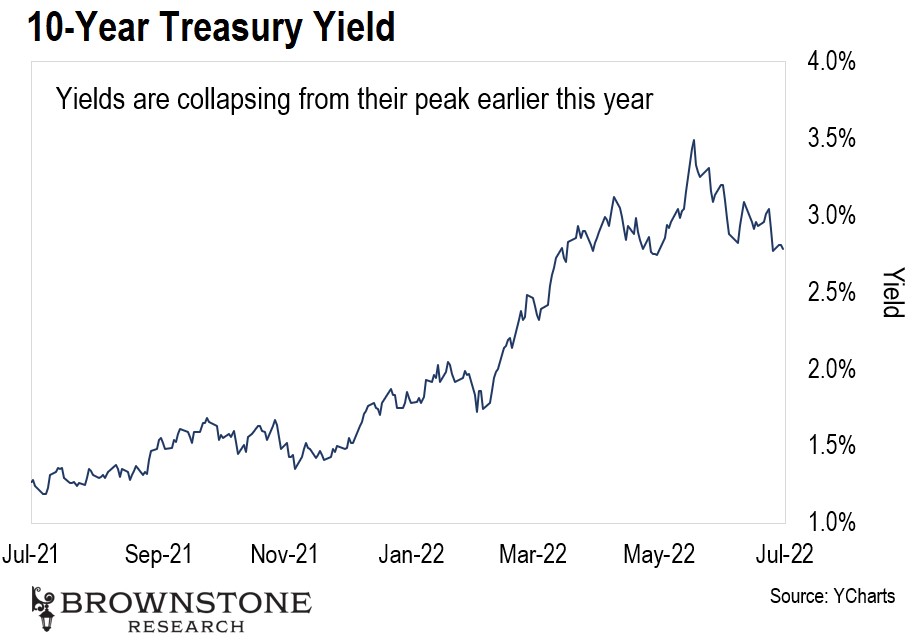 When there is bond buying pressure, the rate of return goes lower. This might indicate that investors believe the Fed is nearing the point of peak interest rate hikes.

That might also pave the way for lower interest rates next year, as hard as it may be to believe… That would be bullish news for stocks.

This is all still playing out exactly how I said at the beginning of the year. The Fed has employed ghost tightening, using scary language to deflate asset prices.

This let the market to do some of the heavy lifting for the Fed early this year. Economic conditions tightened without even the Fed having to implement rate hikes until March.

The Russia-Ukraine war has complicated inflation and energy prices, which is now accelerating the intensity of the rate hikes that were experiencing.

And keep in mind, the Fed is still trying to engineer a soft landing and skirt a recession.

In the eyes of Powell and Treasury Secretary Janet Yellen, we’re not in a recession. And they believe we might not even succumb to one either.

So remember, please take the news with a grain of salt always.

The media companies are a for profit in the business of selling stories. The sad truth is human nature is drawn to fear and negativity. So that’s what the news will forever be pushing.

But a simple look at the data under the hood shows a much more promising story.