Elon Musk, Jamie Dimon, and Evan Spiegel are all big-name CEOs. And they’re all calling for a major recession.

Earlier in June, Elon Musk told Tesla (TSLA) executives he had a “super bad feeling” about the economy and to “pause all hiring worldwide.” Then in a separate email to employees, he announced that Tesla would be laying off 10% of its salaried workers.

Likewise, JPMorgan (JPM) CEO Jamie Dimon warned people to “brace yourself” because a “hurricane” is about to hit the economy.

And Snap (SNAP) CEO Evan Spiegel wrote that the “macroeconomic environment has deteriorated further and faster than anticipated,” which resulted in a $135 billion wipeout across social media stocks.

And it’s easy to see the reason for their pessimism.

The economy is in a weird place right now. Economic data was showing inflation lessening (decreasing from 8.5% to 8.3% between March and April) before jumping back up to 8.6% in May.

So given what big names these three are, naturally we listen.

They may indeed be right – but it’s a little too early to tell.

JPMorgan’s chief of macroeconomic research reiterated his stance that he sees no recession for this year and forecasts the S&P 500 at 4,900 by year-end. Likewise, neither Fed Chair Powell nor President Joe Biden sees a recession as inevitable.

So is there another motive for these bigwigs to spread doom and gloom?

A Motive to Manipulate

The truth is that Musk, Dimon, and Spiegel do have motives beyond altruism for getting on the news and telling us what they think.

It’s very convenient from a corporate standpoint. If they say there’s going to be a recession, then they have to trim the fat, cut expenses, and enhance their margins.

Jamie Dimon, for example, likely is taking his bearish stance because hedge funds got hit hard between November and now.

Long equity hedge funds (those that buy stock and hold it for the long term) sank 14.8% in the first quarter of this year alone. And hedge funds are a huge client and revenue source for JPMorgan.

When trading volumes go down, JPM’s revenue goes down and their stock lending goes down. They need to cut some headcount on the payroll to make up for it.

So Dimon can blame customer losses on an impending bear market… when in actuality, he’s playing catch-up with his margins.

And cleaning up the margins to improve profitability works for Musk and Spiegel as well. A potential recession is a perfect time to clean house and decrease your headcount, thin payroll, and cut expenses.

Whether it’s true or not, doomsday messaging can tell a narrative that’s useful to them.

But there’s another more personal benefit to driving share prices down as well.

Big-name CEOs tend to be compensated in stock more than cash. Cash naturally erodes and also has a tax consequence, whereas stocks can be held for long-term capital appreciation with favorable tax treatment.

And there’s something else… Big execs finance their lifestyle in ways you and I don’t.

They keep cash compensation to a minimum to avoid taxes. And when they need to buy stuff like a house, jet, or a new yacht, for example, they don’t go out and sell millions of dollars’ worth of stock.

Instead, they go to a bank and pledge some of their stock as collateral in exchange for a line of credit at the best interest rate anyone can get.

So if they can get their stock at a beaten-down price – all while they know their company is still healthy and margins are even improving – then they can easily make an extra few millions by artificially encouraging their share price to drop on bad economic news.

And when the stock goes back up, they can pledge it as collateral and continue financing their lifestyle.

I can’t guarantee that’s what’s going through these men’s minds right now, but it’s important to keep these potentially biased motives in mind.

Things Aren’t as Bad as They Seem

Despite what Dimon et al. would have us believe, things aren’t all as bad as they might seem on the surface.

Employment numbers are actually looking up. The economy added 390,000 jobs in May. Likewise, the labor force grew by 330,000 people with a participation rate of 62.3%. This hints that the job market is stabilizing between supply and demand for workers.

The May numbers put us just 822,000 jobs away from where we were in February 2020 before the pandemic.

Likewise, it’s only a matter of time before supply chains loosen, the economy loosens, and prices come down.

As labor resumes and manufacturing increases, supplies will come back online. It’s anecdotal, but Sony already guided for higher production on their impossible-to-find PS5 consoles.

And an always-good sign is that Warren Buffett is buying.

He’s a man who has historically bought at low points. He’s a stickler for a good deal and snatches up shares at big discounts. Buffett often catches the economy at the low point and rides it back up… And he’s been buying – a lot.

Not only that, but my system, the Big Money Index, is closer to oversold than overbought. Buying ticked up after hitting oversold at the end of May. As predicted, the S&P 500 rallied 9.8%. 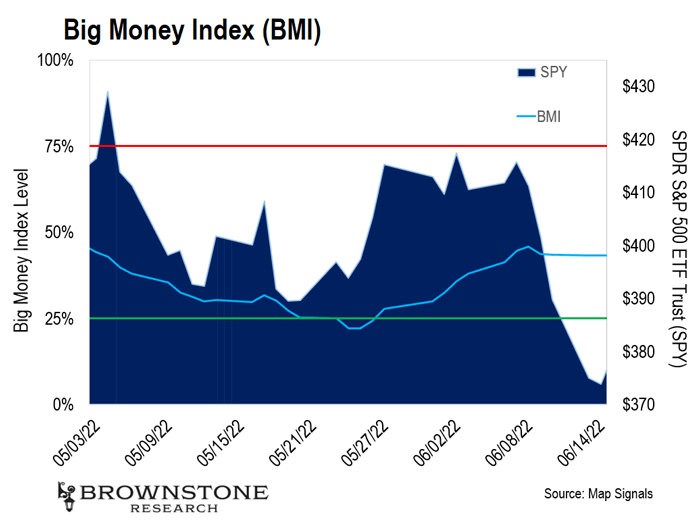 I believed the worst of the selling had passed… but selling resumed on the heels of a bad Consumer Price Index (CPI) report and Producer Price Index (PPI) release.

The Fed just raised rates by 75 basis points as well last week, which is what the market initially wanted. However, selling resumed when Switzerland also raised rates unexpectedly by 50 basis points.

While markets are still volatile, the BMI is holding steady. Should it resume a lower trend, oversold conditions are historically bullish for stocks.

Another good thing is that margin debt calls, which initially caused the steep sell-off earlier this year, are all but washed out.

That means there’s little to no margin left. That leverage coming out of the system is healthy and necessary to be constructive going forward.

It’s Time to Look Up, Not Down

Earning analysts still have not cut earnings estimates. In a report by Yardeni Research, S&P 500 consensus revenue estimates for 2022 and 2023 are still at record highs.

No matter what, we will likely have continued volatility in the meantime. But in the fourth quarter of this year, I believe inflationary forces will be reversing course and investors will realize stocks are heavily oversold.

Investors playing catch-up should enable us to close out the year strong.

So anytime we see big names predicting the end of the world, let’s take a closer look… especially if there’s any personal gain at stake.

There are still plenty of reasons for optimism.