I’m back up at MIT this week digging in on the bleeding edge of computing technology.

Artificial intelligence, machine learning, semiconductor technology, wireless networks, brain-computer interfaces, and the big one – quantum computing – are all being discussed.

As we might remember, just a few months ago, we reached the point of quantum supremacy. That’s the point at which a quantum computer can outperform the most powerful supercomputer on earth. And Google did it in September… The implications are profound.

And the race is on to leverage this newfound superpower.

I’ll be covering insights from these discussions at MIT on Wednesday and Thursday… They’re not to be missed.

But for today’s edition of The Bleeding Edge, let’s focus on wireless technology and 5G. There are some major developments happening as the 5G rollout continues…

Apple’s 5G iPhone launch is going to be massive…

Apple just reached out to its suppliers to increase its manufacturing numbers in preparation for the 5G-enabled iPhone launch, which we expect to come next September.

Apple told suppliers that it now expects to ship more than 100 million 5G-enabled iPhones. That’s up from the company’s previous projection of 80 million 5G iPhones.

Remember, 5G is the next generation of wireless connectivity. Speeds will be at least 100 times faster than the average 4G speeds we enjoy today.

This is exciting news. It tells us that demand for the 5G iPhone is exploding, even before the product is announced. And it confirms my belief that we will see record-high conversion rates from old iPhone models to the new 5G iPhones.

That’s something that hasn’t happened in years. The last several iPhones just haven’t been a big step up, so users didn’t upgrade right away. There was no reason to. The below chart gives you an idea of this trend. In 2019, smartphone users were waiting 33 months on average to get a new device. 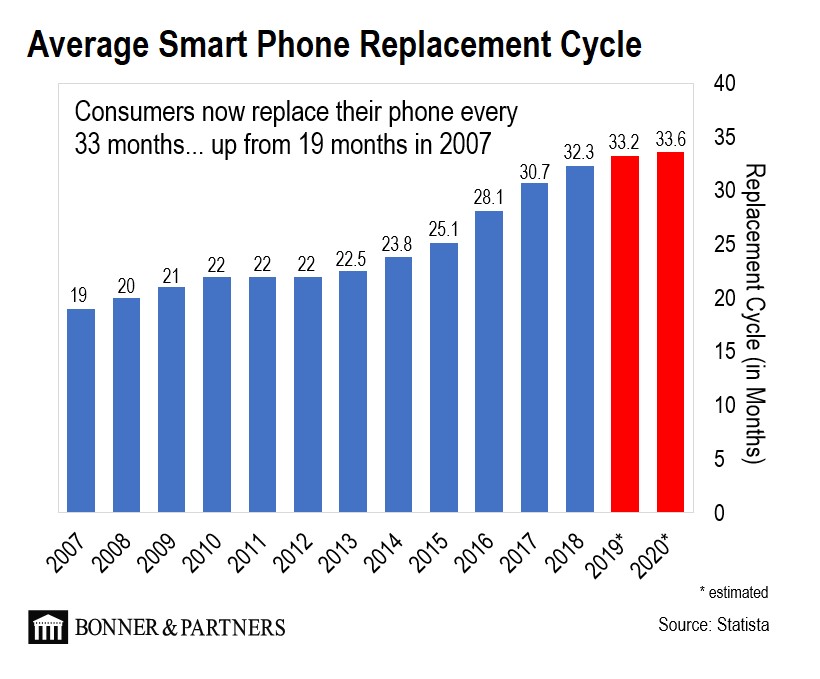 But with 5G, the new iPhone will be revolutionary. Clearly, Apple expects to see a massive wave of upgrades right after the launch.

Of course, the reason Apple is talking to its suppliers about this in advance is to give those companies time to produce more of the parts that go into each iPhone.

Suppliers then need to ship those parts to the contract manufacturer, Foxconn, which will put everything together and ship the finished phones to Apple stores around the world. It’s a sophisticated supply chain.

And here’s the big insight from this…

Apple’s smartphone market share is only 12–13% globally in any given quarter.

Many people think Apple dominates the smartphone space because the iPhone is so popular. I’ve even heard some very smart people claim that Apple has a monopoly. But the fact is, it’s just not that big of a smartphone player at 12–13%.

My point is… if Apple plans to sell 100 million 5G iPhones, how many 5G devices will Samsung, LG, Huawei, and the other big global manufacturers sell? After all, Apple is just a small percentage of the overall smartphone market.

The bottom line is that 5G is here now. Yet many people continue to underestimate just how revolutionary this latest generation of wireless technology will be.

(This news from Apple has important implications for technology investors. Increased shipment demands from Apple means more business for companies that produce essential 5G components. And one 5G component maker is on the top of my list for 2020. Details here.)

More evidence that 5G is about to go mainstream…

As if the news from Apple wasn’t enough, there’s more proof that 5G is going mainstream.

This company is known in the industry as a “fast follower.” MediaTek waits for the top semiconductor companies to put out the first generation of new chips for high-end customers, and then it “follows” with lower-cost chips for midmarket customers.

I competed against MediaTek when I was an executive in the semiconductor industry. I can tell you that its model is impressive.

My company would release a high-cost, high-performance chip, and then MediaTek would follow with a chip that cost 30–50% less but still performed well. The quality wasn’t quite as good as ours, but it was still impressive for the price point.

The key is that MediaTek waits until there is already a market for a new technology. It lets other semiconductor companies spend the money to “warm up” the market. Then it releases its product soon thereafter.

It’s a shrewd way to do business. And it’s great for consumers. For one, MediaTek gives mass-market manufacturers more cost-effective choices. And it also forces incumbents to remain nimble and continue to innovate.

So the fact that MediaTek just launched a 5G chip is a sign of increasing 5G adoption.

It may not feel like it yet, but this tells us that the 5G market is starting to mature now that MediaTek has stepped in with a product. That means manufacturers now have a full suite of components to choose from when producing 5G consumer products.

For this reason, we can expect to see an explosion of affordable midtier 5G devices hit the market next year.

Ericsson’s mobility report is out with eye-popping 5G projections…

I look forward to reading this report every quarter. The report is a great way to get a feel for how rapidly wireless networks are growing around the world and how quickly data traffic is increasing over wireless networks.

And for technology investors like us, the report also shows us how fast people are adopting new technology. And that’s what I want to talk about today…

This tells us how quickly 5G is spreading. And it indicates that adoption will be very rapid.

Plus, the mobility report shows that data traffic continues to double every 14–15 months. That’s even faster than Moore’s Law (the idea that computer processing power doubles about every 18 to 24 months). 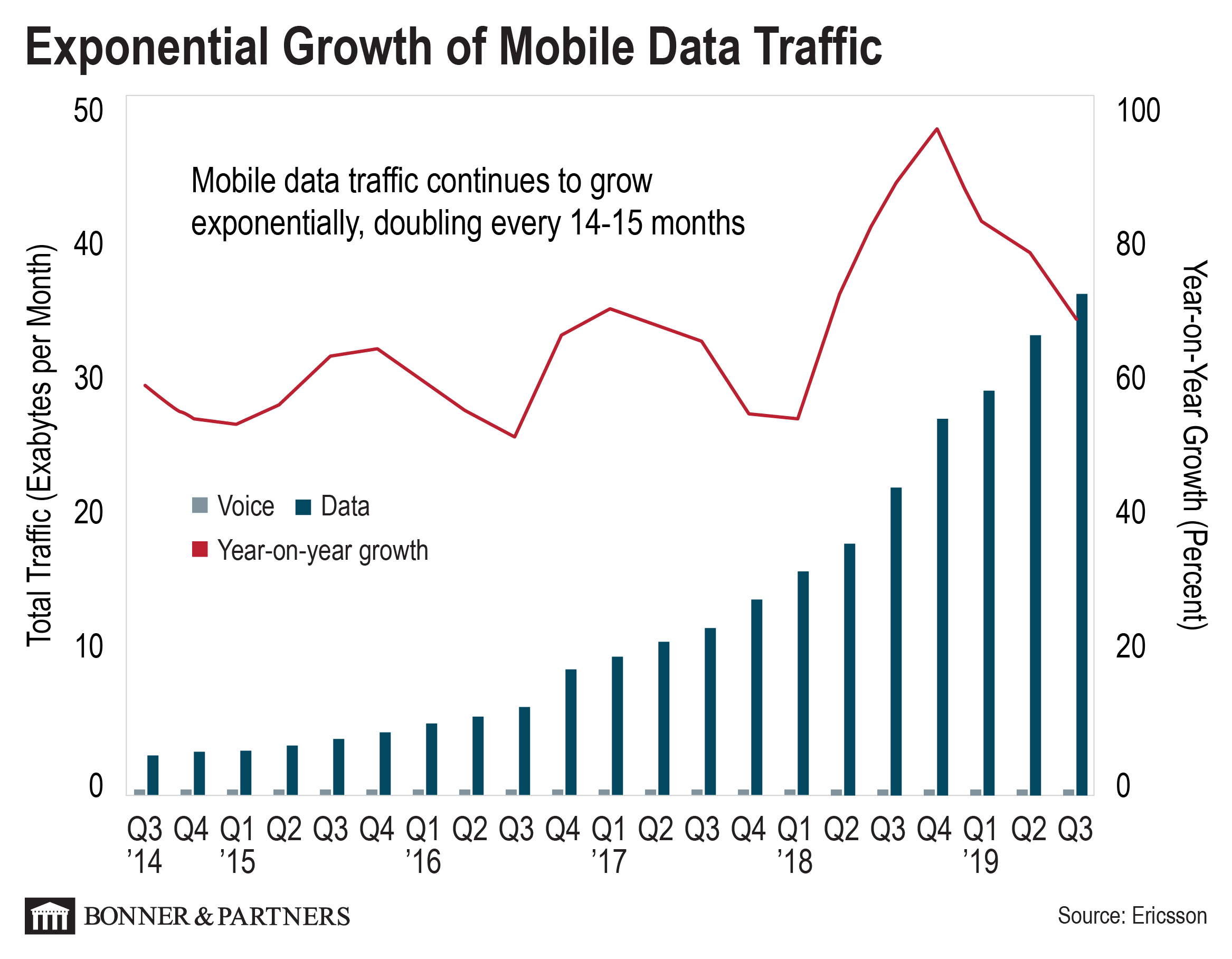 So the increase in wireless data has already gone exponential… And that’s only going to kick up a notch with 5G. I can’t wait to get my 5G-enabled phone…

P.S. As Apple’s own estimates show, 5G is going to usher in a tsunami of smartphone upgrades in the coming year. That’s because pre-5G phones will not work on 5G networks. That means there are roughly three billion smartphones out there that need to be upgraded to a 5G-enabled model.

This represents the largest smartphone replacement cycle in history. And I have identified the one company that produces an essential component that must go into every 5G phone.

As orders for 5G phones ramp up in the coming months, this company’s bottom line is going to balloon… as will its stock price. That’s why I call this company my No. 1 tech stock of 2020.

Simply put, this stock needs to be in every tech investor’s portfolio as we enter the new year. Get all the details right here.