This week started off on a positive note.

Pharmaceutical giant Pfizer and its partner BioNTech announced fantastic results from their current clinical trial for a vaccine to fend off COVID-19.

While the data is not yet peer-reviewed, the vaccine was more than 90% effective in a small number of patients who were infected by COVID-19.

Pfizer’s approach is similar to Moderna’s. Its vaccine also uses messenger RNA (mRNA). An mRNA vaccine is injected into a patient, causing the body to produce proteins that resemble the COVID-19 virus.

This prompts the patient’s immune system to produce antibodies to fight off those look-alike proteins. In theory, this helps prepare our bodies if we are exposed to the real thing.

No mRNA vaccine has ever received a Food and Drug Administration (FDA) approval in the past. In this regard, the incredible progress made by several biotechnology companies working in this space over the last six months is remarkable.

It is not unusual for a vaccine to take 10 years from early development to FDA approval. And here we have several candidates that may be able to accomplish this in less than nine months…

Bleeding Edge readers will not be surprised by this news. I have been predicting at least one or maybe two vaccines will receive FDA approval for emergency use authorization (EUA) before the end of the year… most likely within November.

What I found incredulous, however, was how the data from the clinical trial was carefully withheld from the public. Pfizer had previously planned to release this data in October, strongly indicating that it would soon apply for an EUA.

Researchers in the academic community, however, rallied together against Pfizer at the very end of September with a signed letter, insisting that Pfizer delay its application for EUA.

The reasoning was that Pfizer needed to wait at least another two months to have “convincing safety data” so we are able to trust the “science.”

But here we are, only five weeks after the signed letter and only five days after the election, and the trial results are out.

The rhetoric that was used by the academic community was that a vaccine might only be 60–70% effective. Ironically, the FDA’s requirement for authorizing a vaccine is that it is at least 50% effective.

And Pfizer and BioNTech had data proving it was more than 90% effective last month.

Equally important is that there do not appear to be any safety issues either. This vaccine is safe and effective, and it’s pretty much a shoe-in for FDA approval of a quick EUA.

This is great news… news that we should have received sooner rather than later.

With the election now behind us, I suspect we’re going to be receiving a lot more good news regarding COVID-19.

Uber and Lyft versus the state of California…

While the presidential election is getting all the coverage, a very important law was voted on in California last week. It was called Proposition 22. If passed, it would exempt gig economy companies from classifying their workers as employees.

Proposition 22 had its origins in an action taken by California’s governor at the end of last year. Governor Gavin Newsom signed a controversial bill into law requiring companies like Uber, Lyft, DoorDash, Instacart, and others to classify their workers as employees. That would require these app-based companies to provide standard corporate benefit packages to workers. And it would make the workers eligible to join a labor union.

Of course, this law was immediately contested by the top gig economy companies in the state, headlined by Uber and Lyft.

Simply put, classifying their workers as employees would cost these companies an absolute fortune.

And here’s the thing – Uber and Lyft are already losing tons of money. They are nowhere near profitable. Neither of them is in a strong financial position. So, if enforced, this law would require these companies to raise the costs of their services significantly or to pull out of California entirely.

What’s more, the people driving for Uber and Lyft and the people delivering food for companies like DoorDash and Instacart aren’t operating like standard employees. They don’t have an office or a set schedule. When they want to make some money, they go work. And when they want to stay home, they do so.

And that’s where Prop 22 came from. It was put on last week’s ballot to allow the residents of California to decide whether they wanted to force Uber, Lyft, and the rest to either change their business model or get out of the state.

As we would expect, the top gig economy companies rallied together to support the law. They raised over $200 million to spread awareness and encourage Californians to vote for Prop 22, which would exempt gig economy companies from having to classify anyone who offers their services to the gig marketplaces as an employee.

And not surprisingly, the labor unions rallied against the law – though they weren’t able to raise nearly as much money. They would have been able to expand their membership and grow their power if they could bring gig economy workers into their fold.

In the end, Prop 22 passed with 58% of the vote. Californians decided that they didn’t want to give up their cheap and convenient services, so they moved to protect the gig economy business model.

This is a great result for the tech industry.

Had Prop 22 been shot down, it could have set a precedent for other states to follow. And that would make it very hard for innovative companies to create marketplaces that match up consumers with voluntary service providers.

As it is, we can expect to see continued growth from the gig economy, which will be especially important in a post-pandemic world.

Could there be life on Saturn’s largest moon?

After the recent discovery that there might be life-forms in the clouds on Venus, an equally exciting discovery has just been made about Saturn’s largest moon…

New research coming from NASA’s Goddard Space Flight Center in Maryland discovered an interesting molecule present in the clouds of Titan. The molecule is called cyclopropenylidene. It is made up of three carbon atoms in a ring with two hydrogen atoms on the outside.

What’s unique here is that this molecule is highly reactive. When it comes into contact with other molecules, it creates new compounds. In this way, cyclopropenylidene contributes to the conditions needed for life. It’s a basic building block of things like DNA.

The fact that this molecule is so prevalent in Titan’s atmosphere has major implications.

Titan resembles what we think Earth was like a very long time ago. It’s the only body in our solar system with large lakes, rivers, and seas on its surface.

For these reasons, some scientists think that there may be aquatic life of some kind living in Titan’s bodies of liquid. The fact that cyclopropenylidene is present in the atmosphere lends more credence to this possibility.

And here’s where it gets exciting – we are going to find out for ourselves.

NASA commissioned a program called Dragonfly that will land a drone on Titan. The drone will roam Titan’s surface, sending back images and data. 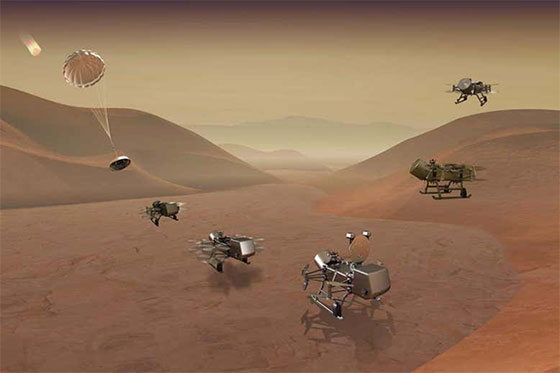 If there’s life on Titan, there’s a great chance this mission will identify it. I can’t wait to see what comes back.

Unfortunately, we are going to have to wait a while on this one. The mission won’t launch until 2027, and the spacecraft won’t get to Titan until 2034.

I’ll do my best to provide readers with a prompt update on this mission in 14 years. Sometimes it takes a little patience, but I suspect this will be worth waiting for…

We’ll end today with one more development from the ballot box last week.

This looks to be a burgeoning trend in America. Other cities like Boston, San Francisco, Oakland, and Portland (Oregon) have each passed similar laws against facial recognition.

I have to say that I am very pleased to see cities being proactive about this.

The fact is, facial recognition is not perfect. It has frequently misidentified people.

When employed by law enforcement, that can result in wrongful arrests, imprisonments, and the destruction of reputations. In fact, false facial recognition matches have already led to a couple of wrongful arrests in Detroit earlier this year. That’s just not something we can permit.

I attended the London Business School back in 2003 and 2004. I lived in the heart of London, right off of Marylebone High Street. And even back then, government surveillance cameras were everywhere. The U.K. has more CCTV cameras than any other country in the world.

And it is deeply disconcerting to know that every step you take is being watched. It’s a terrible feeling when you realize that Big Brother is always there.

Using facial recognition surveillance systems on perfectly innocent, law-abiding, tax-paying people is wrong. It’s far too much power for any government to have.

So I’m glad to see Portland stepping up and banning this kind of surveillance. I hope other cities follow suit.