There are two great motivators in this world: fear and greed.

Both the mainstream media and Wall Street figured out a long time ago that fear is the easier motivator. There is a hierarchy of our needs.

If people are constantly living in fear, then they can never chase greed or challenge the giants. The average person spends every day fearing, just trying to survive until tomorrow.

And greed isn’t always a bad thing… It just refers to our desire to do better for ourselves.

But the endless cycle of fear we are fed doesn’t leave much room to get wise, invest smart, or elevate our lives. You can’t chase greed when you’re worried about surviving day-to-day.

That’s why today, I’d like to share some advice on how we can beat this cycle and profit despite all the fear that’s currently surrounding us…

Don’t Fall for the Fear

We are all emotional creatures, and we react to things around us.

When it comes to jumping out of harm’s way or a physical confrontation, we do pretty well. We can always rely on that good ol’ fight or flight response.

But when it comes to our wallets, we tend to do a pretty terrible job. People react to what they see and make the wrong financial moves every day.

Wall Street and the news corporations have figured out how to play our emotions, though. The media shovels fear to us because we consume it – it sells.

And it enables Wall Street to manipulate our behavior. The Big Money – hedge funds, big banks, and other institutional players – are happy to buy at the bottom of the market after fear has caused the masses to sell out.

Not long after, markets seem to magically move.

Look at this chart, showing many of the biggest fears in the market over the past 12 years: 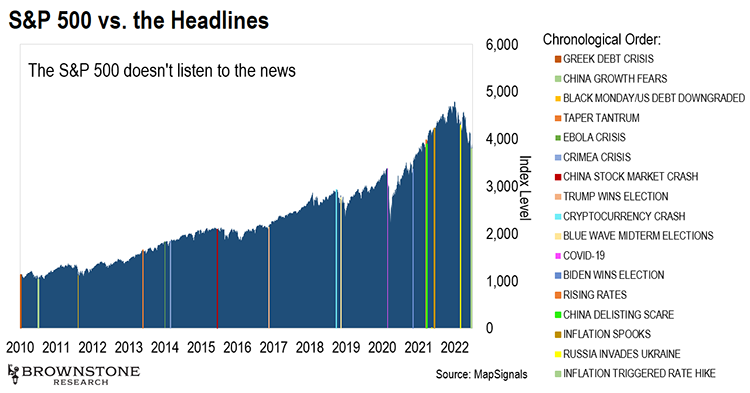 After every huge headline generates fear, markets drop. Yet in the long term, the market continues to shoot higher than ever before.

The cycle happens over and over again.

When bird flu hit around 2010, Tamiflu was reported to help prevent death. Not long after, it was impossible to find on the shelves.

Likewise, the Russia-Ukraine war actually started in 2014 after the annexation of Crimea. Fears of World War 3 rattled markets back then.

And just a few months ago, the Russia-Ukraine war was occupying every headline imaginable. And we are still seeing headlines filled with World War 3 fears and global shortages like a rerun.

The news reuses these same “successful” news cycles… over and over again. Do what works, sell ad space, and pay Wall Street.

And now… Inflation, interest rates, and a recession are the big fears that Wall Street and the media are peddling.

That’s why I’m concerned by the market action we’ve seen so far this year. The entire psyche of the market got pushed over the edge, and many people dumped their stocks.

Time in the Market Is Better Than Timing the Market

It’s a common expression in investing: Time in the market is better than trying to time the market.

But if you pulled your money out of the market with every mass fear event… you’d likely have a whole lot less. Investors who missed the 10 best performing days since 1990 would only have around $11.85 now.

It pays to stay.

Let’s look back to 2015. The media preached fears about interest rates going negative and worried about the banking system collapsing.

And look at where we are now… Now they’re preaching the fear of higher interest rates and inflation eating our hard-earned dollars.

And how would you have done if you sold your investments when the media preached selling and rebought at the top just like they said? Our portfolios would be hurting compared to if we’d just sat through the discomfort.

It pays to stay invested.

If we keep our money in, we ride the waves and turbulence, yet we ultimately see our money grow over time.

So despite how the media peddles fear, let’s not fall for the trap. In the end, time is on our side.