Last week, when markets were tumbling, I got a phone call.

A colleague told me, “Hey, I think it’s time to get out.” He’s sitting there, watching the market plunge and panicking about his portfolio.

I replied, “Look, you can exit your positions if you want. But I think you’d be making an incredible mistake… ”

Typically, investors pile in when everyone is exuberant… which is nearly always the peak. And when markets tank, they often liquidate at the lows.

That’s important to remember in times like these. Right now, the market is very emotional.

Companies are adjusting guidance lower, anticipating slower revenues. Inflation and interest rates have us all worried. And suddenly, everything has shifted from boom time to bear time…

Now when people think about their brokerage accounts, they’re having second thoughts.

That’s why today, I want to share with readers the same advice I gave my colleague… and explain why now is not the time to sell.

He also indicated that the Fed wouldn’t move at 75-basis point hikes going forward – something analysts had speculated about.

Initially, markets rallied… The S&P 500 and Nasdaq both ended up around 3% after the news broke.

But what a difference a day can make.

Thursday erased all those gains, as the Nasdaq plunged 5%. The S&P 500 fell 3.5%. A choppy Friday market did little to ease anxieties. And Monday continued the volatility…

And we can see this in my system as well… 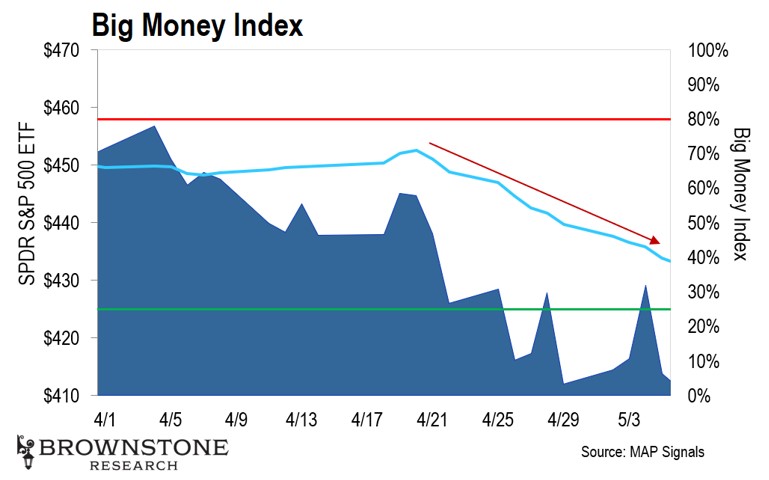 My Big Money Index (BMI) tracks institutional buying and selling in the markets. When it’s trending up, there is more buying than selling. When it’s slumping, we’re seeing more selling than buying.

The red line at the top indicates overbought conditions. And the green line at the bottom marks the oversold point.

As we can see, buyers have evaporated. And the BMI (blue line) is nearing oversold conditions.

Yet while this might seem like a catastrophe to some people, this sharp downturn is actually making me optimistic about the weeks ahead.

Historically, when the BMI goes oversold, it’s one of my highest bullish signs. It means selling is getting closer and closer to exhausting itself.

After all, at some point, everyone who wants to sell has done so… And no one is left to push prices down further.

That’s when value investors – think Warren Buffett and Bill Ackman – tend to step in a scoop up stocks at a discount.

Now, there’s no telling which exact day we’ll hit that sort of capitulation… But at the current rate the BMI is falling, I expect it to hit oversold within the next two to three weeks.

That puts the bottom somewhere around the end of May or the beginning of June.

And historically speaking, after going oversold, we see the market bounce back in a big way.

Yet it’s very rare for us to actually hit oversold conditions. It’s only happened six times since 2014. Often, buying resumes before we reach that point and the BMI ticks back up.

That’s why, when my colleague asked me about selling, I advised him to sit tight… because if he sold, he’d likely be blowing out at or near the lows.

Even if the market trends down or sideways for a few more weeks, he’d be missing out on the relief rally that historically follows these kinds of dips.

Where Do We Go From Here?

I know it’s uncomfortable to sit and watch our portfolio value drop every day. It’s painful. I feel it too.

Yet there’s good reason to suffer through the red days rather than selling out here.

Much of the current volatility is tied to fear and anxiety over current events like interest rates and inflation. Even if the Fed raises rates another three times at 50 basis points, we’re only going to end the year around 1.75%. That’s still historically low.

Ultimately, this situation will pass as the Fed engineers its soft landing.That’s where keeping a long-term perspective and thinking logically comes in.

Do we think the companies we hold are still viable businesses? Are they managing their debt levels? Can we envision them growing their earnings and revenue at some point in the future?

If so, then let’s not sell at the lows. In fact, if we have the stomach for it, we should be buying at these lows. I’ve added several positions to my own and my kids’ accounts over the past week.

As the current moment shows, “buy low, sell high” is one of the most difficult pieces of advice to follow.

Yet if investors can move against the herd in moments like these, we will be rewarded in the long run.