What an exciting day we had yesterday.

The Dow Jones Industrial Average, the S&P 500, and the Nasdaq Composite all closed higher. And even the STOXX Europe 600 hit its first new high in more than four years.

As a heads-up, I will be giving my team a break over the holidays from our regular publishing schedule.

This week, we’ll be publishing The Bleeding Edge as normal through Friday. From December 23 through January 1, we’ll still be keeping in touch daily, but we’ll be doing something a little bit different.

I’m going to use this time to share with you several of my predictions for 2020. We will have a bit of fun looking into the near future. Hopefully, you’ll enjoy getting a view of the exciting things that I see coming in 2020.

And we will be back to our normal format for The Bleeding Edge starting January 2.

Scientists from my engineering alma mater, Purdue University, just created a new 3D-printed structure inspired by human bones. It’s called a trabecular structure. It’s a sponge-like design, and it is the reason human bones are so strong. Here’s a visual… 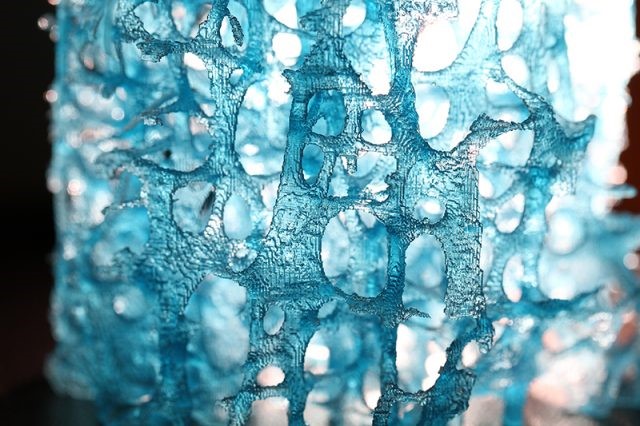 This is the 3D-printed structure, but it resembles the structure of a human bone.

I always love to see technical designs inspired by nature like this. There is often such practicality in designs that nature has refined over millions of years of evolution.

This structure consists of vertical plates and horizontal rods. And researchers found that increasing the thickness of the horizontal rods by 30% resulted in a 100-fold increase in the amount of time the structure would last. That’s incredible.

This discovery will provide a much-needed spark for the 3D-printing industry.

This is a market that’s been flat in both growth and share price increases for the last two years. While the technology scales beautifully, it hasn’t yet reached widespread adoption.

Well, this new structure is a game changer. For one, this is a design that traditional manufacturing processes cannot produce. But 3D printing can create these bone-inspired parts, which have superior load-bearing ability relative to their weight.

If we think about things that benefit from light materials but need strength, that’s where this design will shine. Cars, aircraft, spacecraft… these are immediate applications for this bleeding-edge design.

So I am optimistic that we will see the 3D printing industry take a step forward next year. The catalyst is the rapidly increasing diversity of materials that can be used for 3D printing as well as an increasing number of applications. And I’m seeing signs of maturity in the industry that indicate the potential for the next leg up.

In fact, one of the most valuable 3D printing companies in the world, Carbon, just hired Ellen Kullman as its new CEO. Kullman was the CEO of chemical giant DuPont for nearly seven years. This is a big move for a private 3D printing company… And it signals a coming of age for the industry.

As the space matures, it will give rise to a trend that I believe has started already… decentralized manufacturing. That refers to smaller manufacturing plants located close to their end markets. It’s a counterrevolution of sorts in the manufacturing industry.

Many readers may remember the glory days of decentralized manufacturing in America… back when we had several plants operating in and around our hometowns, producing goods that would be sold domestically. The same is true for many countries in the past.

That was before massive plants opened offshore, mostly in mainland China. We’ve had this centralized model for decades, where products are mass-produced using cheap labor offshore and then shipped all over the world.

Well, 3D printing and robotic automation have been gradually eating away at the centralized manufacturing model. With 3D printing, we can create fully customizable products on demand. It’s the opposite of the one-size-fits-all approach.

Imagine a world with a larger number of smaller manufacturing plants capable of producing products customized to consumers’ wants and delivered in a matter of days – or sometimes hours. The convenience will be incredible.

So as industry shifts toward this technology, 3D printing sites will be smaller scale and dispersed throughout the market. And this will ultimately create a new manufacturing renaissance, especially in developed countries.

Checking back in on the New York Stock Exchange’s proposal…

Earlier this month, we talked about the New York Stock Exchange (NYSE) proposal to allow companies to do a direct listing and raise money at the same time. This would make the NYSE the exchange of choice for many upcoming tech IPOs.

As a reminder, a direct listing is where a company simply lists its existing shares for trading on an exchange. This is far cheaper than doing a traditional IPO. And there’s no lock-up period. That means early investors can sell their shares immediately.

For comparison, traditional IPOs typically come with a 180-day lock-up period where early investors are not permitted to sell their shares.

But the downside to a direct listing is that the company cannot sell any new shares… which means it can’t raise capital. And that’s exactly what the NYSE’s new proposal would remedy.

Sadly, I must report that the Securities and Exchange Commission (SEC) rejected the proposal.

The SEC didn’t like the idea of a company selling new shares without a lock-up period. It basically said this would enable bad actors to facilitate “pump and dumps.”

That’s where a stock is hyped up to absurd valuations while the insiders dump their shares. Then the stock plummets, and public investors get hurt.

Well, I have news for the SEC – pump and dumps have been happening for decades, lock-up period or not. Rejecting this proposal will not stop them.

One thing that can put an end to this appalling practice is investor education and due diligence. After all, nobody is forced to buy any stock. And once we understand what a pump and dump looks like, it’s very easy to identify them going forward.

Another thing that would help would be the prosecution of those bad actors. Case in point… only one banker went to jail from the 2008 subprime crisis. You have to be kidding me, right?

So I’m disappointed in the SEC’s rejection. By not allowing private technology companies to do a direct listing and raise capital, it is limiting our ability to invest in these incredible companies at better prices.

And those that do choose to go public via the traditional IPO route end up having investment banks, institutional funds, and high-net-worth individuals tightly control their shares.

But the NYSE isn’t giving up the fight. It resubmitted the proposal with some small tweaks designed to satisfy the SEC.

I like this perseverance. As I said before, this proposal will make it easier for early stage tech companies to come to public markets. And that will lead to more investment opportunities for everyday investors.

As always, we’ll keep you posted on any updates in these pages.

Twitter’s move to decentralize itself…

Here’s a very interesting development at Twitter… The social media giant wants to decentralize itself.

To do so, it is creating a five-person team of open-source developers to build a decentralized social media network. Ultimately, the plan is to have Twitter’s technology platform run on this new decentralized technology.

This is a great move by CEO Jack Dorsey. He’s doing this in response to the heat that social media companies are getting right now, not the least of which is from Capitol Hill. This move follows Dorsey’s last announcement that Twitter would not generate any revenue from political ad campaigns.

The problem is that it is nearly impossible to enforce policies on a social media platform in a way that’s fair for all users.

How can one company possibly arbitrate what is correct and what isn’t for every single post on social media? And it’s so easy for bad actors to post misleading and sometimes malicious content that influences users in a negative way.

Twitter’s answer is decentralization. This way, it’s up to the network to moderate content – not the social media company. This model would separate Twitter from its users’ content. So I think this is a smart move.

It’s not a perfect solution, but it is a step in the right direction. If Twitter can couple this decentralized network with a way to verify both users and content using artificial intelligence and identity verification, then the company may be on to an ideal solution.

There are already several decentralized social media startups attempting to solve these problems. The problem is that these early stage companies have no network to leverage. Given the dominance of Facebook, Twitter, and other well-established global social media players, it’s hard to gain a foothold in the space.

So if Twitter can decentralize itself and develop the features of user and content verification, it will have a tremendous advantage over the startups working on decentralized social media networks.

By the way, I recently sat down with Glenn Beck on his podcast to discuss the role of social media in our society. Have we given up too many of our freedoms to data collectors like Google and Facebook? What role will social media play in the next election?

Click right here to catch the full discussion I had with Glenn.