The U.S. equity markets have already had a fantastic week.

Yesterday’s market action brought the Dow Jones Industrial Average and the S&P 500 within a nanometer of all-time highs. And the Nasdaq Composite started the day with a record high. And the index futures are all pointed to what will likely be record highs on all three indices today.

This stands in stark contrast to what is happening with the coronavirus. In fact, it stands in contrast to what the major media outlets are reporting. I did a quick sweep of CNN, CNBC, MSNBC, The New York Times, and Bloomberg, and I couldn’t find anything at all about these record-high market levels.

It’s really hard to believe. This is why objectivity, analysis, and data are so critical in investment research.

And speaking of data…

China announced that it is cutting tariffs on $75 billion of U.S. imports in half, effective February 14. This is directly tied to the Phase 1 agreement signed last month between the U.S. and China.

Better yet, the numbers show that the U.S. trade deficit narrowed in 2019 for the first time in six years.

It is fascinating to watch the impact of economic and trade policy on equity markets. And as investors looking to secure our financial futures, there is nothing better than strong economic conditions to boost investment returns.

Now let’s turn to our insights for today…

The first drug entirely designed by an AI is here…

Seemingly out of nowhere, a drug entirely designed by an artificial intelligence (AI) has advanced into human clinical trials. The drug is called DSP-1181. It comes from a British early stage biotechnology company called Exscientia.

It is simply incredible how fast this happened… But I’m not surprised at all. The role of AI in drug discovery was a hot topic at the STAT 2019 Summit, which I attended in Boston last November.

Most experts felt like AI-designed drugs were many years off. Even the most aggressive expert on stage said this was two or three years away.

I am happy to say that my view was even more aggressive. In my AI prediction series published on Christmas Eve, I predicted that an AI would discover a new drug therapy all on its own in 2020. And here we are in February, and it has already happened. As it turned out, the most aggressive expert in the biotechnology field was off by a few years… And he was the closest of them all.

DSP-1181 is designed to treat obsessive-compulsive disorder (OCD). In designing the drug, the AI analyzed billions of possible molecular combinations.

From there, it came up with a shortlist of 350 compounds to be tested. That’s one-fifth the normal number of compounds a biotech company would have to analyze.

As a result, the AI had DSP-1181 ready for human clinical trials in under 12 months. By comparison, it normally takes four and a half years to get a drug to clinical trials. The AI sped up the process by nearly 80%.

I can’t emphasize enough how exciting this is. This is going to become the norm for drug discovery and development.

The time it takes a drug to get from discovery to human clinical trials and then to FDA approval is going to shrink dramatically. Obviously, this is great news for the patients who need these treatments.

What may be less obvious is that this is also going to reduce drug prices significantly. If companies can do drug development in a fraction of the time, they are going to save hundreds of millions – and sometimes more than a billion dollars – per drug. That will naturally lead to lower drug prices over time.

So once again, technology will prove to be the best solution to one of society’s most pressing problems.

Speaking of biotech, we just got big news out of Silicon Valley. Prominent venture capital firm Andreessen Horowitz announced that it has raised an impressive $750 million for Bio Fund III. This war chest will be used to fund the next generation of early stage biotechnology companies.

Historically, Andreessen focused on IT, software, and computing investments. It got into biotech about five years ago with the launch of Bio Fund I, which raised $200 million. Then it launched Bio Fund II in 2017, raising $450 million.

That’s a direct indication of how much excitement and opportunity there is in the biotech space right now. And this has everything to do with the fact that biotech companies are now applying bleeding-edge technology to drug discovery.

Andreessen shares my view that biotech is one of the best sectors for investments in 2020. We look at the biotech industry through the lens of advanced computational power, AI, machine learning, and deep neural networks.

These techniques are benefiting from Moore’s Law – the concept that computer processing power doubles about every 18 to 24 months. And next-generation biotech companies are leveraging advanced technology in their research and development for new drugs.

As I mentioned above, this will lead to faster, cheaper, and more accurate drug development.

Upon launch, Bio Fund III will focus on seed and Series A venture capital rounds. That means it will provide startup capital to the most promising biotech companies of tomorrow.

And as we have seen, these companies follow a different early stage path than most tech companies.

Most tech companies today are staying private for as long as possible. Uber, for example, was private for 10 years prior to its IPO last year.

Early stage biotech companies go public much sooner. Many of them look to IPO after a big Series B funding round. That’s because they can start their Phase 1 clinical trials around that time. This, in turn, creates a great window for accessing the public markets.

So we can expect Andreessen Horowitz to fuel many of the future recommendations that will end up in my Exponential Tech Investor and Early Stage Trader portfolios. I am excited to see how the industry progresses in the coming years.

Twitter just struck a blow in the battle against deepfakes…

Twitter just announced that it is going to flag media files that have been altered in some way, starting next month. Any tweets containing such media will be labeled as “manipulated media.” 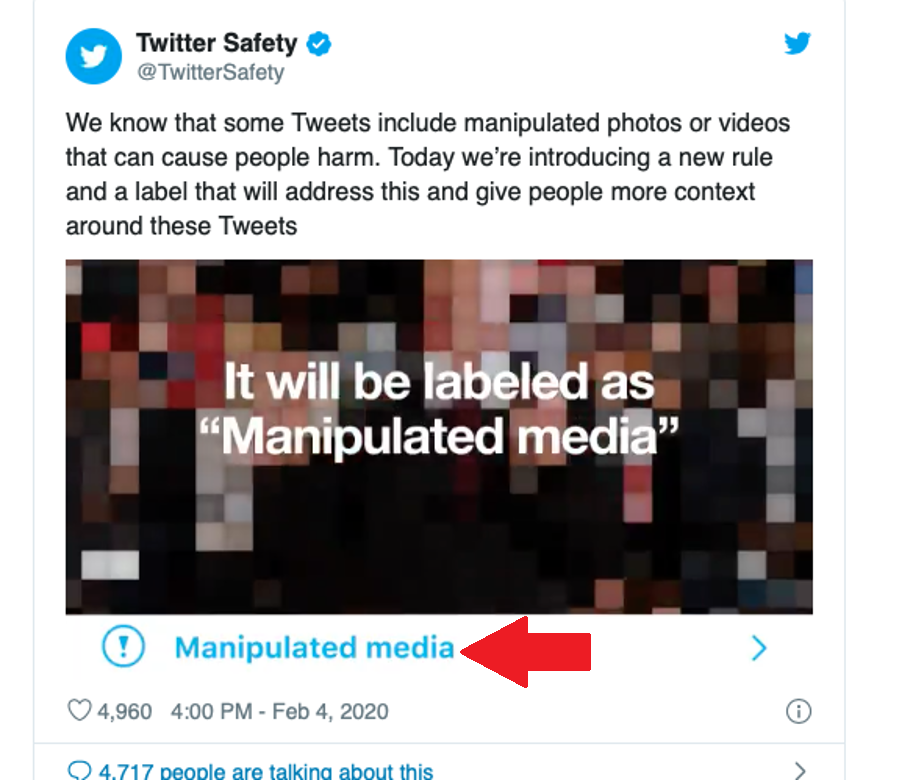 This is a smart move by Twitter. And if we remember, last year Twitter announced that it would no longer take any advertising revenue from political ads.

I applaud both efforts to address some of the most challenging issues facing social media platforms. Facebook has basically done nothing, and Twitter has made two strong moves in the right direction.

We have talked about the challenges posed by deepfakes before. With today’s technology, it is easy to create lifelike videos of public figures saying and doing things that they didn’t say or do. Unaddressed, that problem leads to chaos, misunderstanding, and even more vitriol.

I proposed three clear solutions. The first option is for social media platforms to authenticate each user, tying each account to a real person. That gets rid of fake accounts set up for malicious purposes.

The second solution is to label media as “verified” when it is created by an authenticated user from legitimate sources and confirmed not to have been manipulated in any way. And the third is to label any media that has been altered as such.

This is a great move by Twitter, and I’m excited to see this implemented. We can expect to see our first “manipulated media” tweets in about one month’s time at the beginning of March.