It must be bad if Apple is having trouble…

The demand for Apple’s products is through the roof. It can’t make enough iPhones and Apple Watches.

The problem? It’s the semiconductor shortage that is affecting just about any electronics product that we can think of. It’s all part of the “tech shock” I’ve covered here in The Bleeding Edge.

The automotive industry has been hit hard as well. And good luck finding an Xbox X or a PlayStation 5. The pain is just as bad with simple home appliances like washing machines or dryers.

And now, the one company that arguably has more purchasing power than any other company in the world can’t get the chips it needs to produce its products. Things just got worse. If Apple is having trouble, everyone else is having an even harder time.

All it takes is for there to be a shortage of one key semiconductor or component and whole production lines stop. If there is no exact alternative component to drop in, there is nothing that you can do.

This time, it appears the shortage is being caused by semiconductor giants Broadcom and Texas Instruments. These aren’t some small-cap, niche semiconductor companies. These are two of the largest semiconductor manufacturers in the world. And having worked at an Apple supplier myself – NXP Semiconductors – the one thing that you don’t want to do is let Apple down.

And what makes this story even more incredible is that Apple is one of TSM’s largest customers. TSM manufactures custom chips for Apple that it designs for its own products.

One would think that the combined influence of Broadcom, Texas Instruments, and Apple would be enough to ensure that Apple gets the products it needs to keep its production lines moving. Clearly, that’s not the case.

This is why it is so critical that the world returns to a decentralized manufacturing structure. There are simply too many chokepoints that can cause supply chain bottlenecks. It’s time for countries around the world to bring manufacturing back on shore.

This, of course, is the impetus behind the proposed $52 billion package to support the U.S.-based semiconductor industry. It’s not clear yet if it will pass and whether or not the money will be spent entirely on semiconductor manufacturing.

But there is one thing I’m certain of… It won’t do a thing to get us out of this mess that we’re in right now. After all, it takes years to build out a semiconductor manufacturing plant.

I can, however, offer a piece of advice. We should get our holiday shopping done now. I mean right now. There will be product shortages everywhere.

And with cargo ships waiting in line for weeks to be unloaded due to labor shortages at the docks, the situation will be exacerbated even more.

This has been a painful way to learn a lesson both for corporations and for governments. Let’s hope they put this wakeup call to good use and take action.

Good luck to all with your shopping.

And if you’re interested in learning about the investment opportunities this broader supply crunch is causing, you can go right here.

The first NFT war has a winner…

But there was some excitement around the deal because of Topps’ plan to work with the Major League Baseball (MLB) organization to launch non-fungible tokens (NFTs).

Basically, Topps wanted to create digital baseball cards to bring the industry into the 21st century. And it secured a $1.3 billion SPAC deal based on this vision.

And sure enough, the Topps SPAC was received well in the markets at first. But then it all came crashing down…

In a shrewd move, sports memorabilia company Fanatics established its own trading cards division. Then it swooped in and took investments from the Players Associations of the MLB, the National Football League (NFL), and the National Basketball Association (NBA).

These are the organizations that represent the professional athletes in each league. They provide a governance framework to ensure that the rights of players are respected. And, most importantly in this case, they manage the name, image, and likeness (NIL) rights on behalf of individual players.

So with these associations taking a stake in Fanatics’ new trading cards business, what do we think happened next?

That’s right – the Players Associations gave Fanatics exclusive NIL licensing rights to launch its new trading cards division with both paper cards and NFTs. Why wouldn’t they? These associations now have a financial interest in Fanatics’ success.

On the flip side, Fanatics’ deal with the MLB Players Association caused the Topps SPAC to fall apart. The reverse merger was called off because it became clear that Topps would struggle to compete with Fanatics. It was a major blow, and Fanatics has now vaulted into an unbelievable position in the industry.

How’s that for drama from an industry that had been left for dead?

And I am seeing an interesting trend around NFTs in the early stage VC space right now. Companies are starting to look at NFTs as their own asset class. And I am seeing a big effort to enable lending against NFT assets.

Believe it or not, this makes perfect sense.

With NFTs going up in price, many holders are sitting on substantial value right now. But they believe those assets are going higher, so they don’t want to sell their NFTs. Doing so would subject them to capital gains, and they would lose all future upside.

With lending services available, NFT holders can borrow money using their NFTs as collateral. That’s a tax-free event. And it allows them to keep their long-term upside. Yet they also get access to liquidity that they could use to invest in other assets.

It’s a great model that makes perfect sense for NFT holders… as long as asset values are going up. And it’s a great business for the company providing lending services. This is a trend we’ll definitely want to track going forward.

And for investors interested in exploring this growing asset class, I recommend going right here to learn more about how to get started.

Another early stage funding round caught my eye recently. Catalog – a company I have tracked for years now – just raised $35 million in its Series B round. This values the company at about $115 million.

And Catalog is working at the bleeding edge of technology. The company is developing tech that can store data and information in synthetic DNA. Believe it or not, this is critical work.

That’s an enormous amount of data. And, of course, it’s growing exponentially each year. The amount of data produced each day is expected to hit 463 exabytes (EB) globally by 2025.

And get this – the world spends about $1 million per minute to store all this data. That’s $1.4 billion a day.

The point is, despite storage costs declining significantly, it is still expensive to warehouse all the world’s data.

What’s more, hardware devices – memory chips, disk drives, and the like – only have a limited lifespan. These devices eventually break down. That makes them a poor choice for archiving historical data long term.

And that’s where synthetic DNA comes in.

Synthetic DNA is pretty much indestructible. It can last for centuries – even millennia. Plus, it takes up very little space.

And as it turns out, it’s possible to transfer large chunks of data to synthetic DNA relatively quickly. That’s what Catalog has been working on.

Catalog has developed a DNA writer that it calls Shannon. And Shannon can transfer about 1.6 terabytes (TB) of compressed data to synthetic DNA with every write. For context, the average laptop has a hard drive that’s about one-sixth this size.

So Catalog can write about six laptops’ worth of data onto DNA with every use. This could enable organizations to move their data onto synthetic DNA, reducing the need for heavy-duty data centers and all the hardware and electricity.

That’s something that could be incredibly transformative to companies, non-profits, and governments all over the planet. And it will help archive the world’s critical data for generations to come as well. Everybody wins.

This is a very exciting application of synthetic DNA. There are so many use cases. I’m also very curious to see which data types are the most popular choices for DNA storage.

A glimpse at the next generation of predictive medicine…

Researchers at the University of California, San Diego have come up with an interesting approach to predictive medicine. They have used nanoengineering technology to develop a wearable biosensor. Here it is: 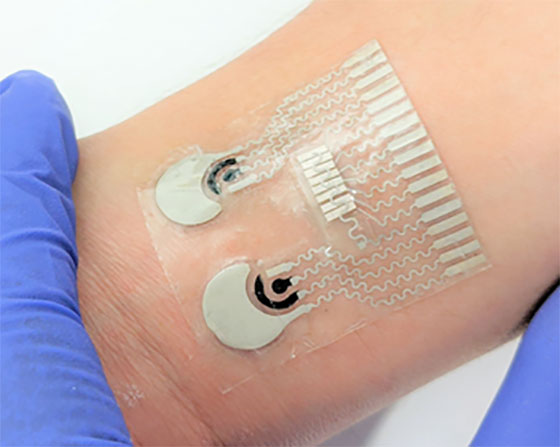 What makes this sensor interesting is that it combines both biochemical and physiological analysis in real time. It can monitor things like cardiovascular data, cholesterol and glucose levels, white blood cell counts, and blood pressure – all in a single patch that fits comfortably on the wrist.

When I look at this, I see incredible utility.

The patch could be paired with a smartphone app capable of relaying this health data back to a primary physician. Having this comprehensive health data would certainly be useful when patients go in for their periodic checkups.

But where I get really excited is how this could enhance the burgeoning telehealth trend. Think about what happens currently when something is wrong…

Applying this biosensor to telehealth reduces much of that rigamarole. We simply link the device to an app that can relay all of our biochemical and physiological data back to our physician. The doctor then has a comprehensive view of our data over a period of time. This could provide critical insights into our health condition.

Then we can simply schedule a call to talk about it. No doctor visit or litany of tests would be required.

So this is a great development coming out of UC San Diego. I’ll be watching closely to see if a company is formed to commercialize the technology.