Hello and happy Monday to you. I hope you had a fantastic weekend. I’m currently preparing for a trip to Washington D.C. There, I’ll speak with policymakers about the future of blockchain technology and the need for a light regulatory touch. I’ll give you more details on that later in the week.

In the meantime, I’ve got three great insights to share with you today.

We will see the world’s first SEC-approved token offering soon… But it’s not what it appears to be. We’ll dissect it. Also, Amazon is doing an end-around the established players in the prescription drug business. If successful, we’ll see lower drug prices and fast home deliveries… a win-win for everybody. Lastly, it’s been a banner year for VC-backed IPOs… and we’re only in July. We’ll talk about why that’s important.

The Securities and Exchange Commission (SEC) just gave blockchain company Blockstack approval to hold the first regulated token offering. Blockstack intends to raise $28 million with the offering. It will do this by selling its Stacks (STX) token.

This is big news. It’s likely this will open the door for other companies to hold their own SEC-approved token offerings.

Blockstack’s offering will fall under SEC Reg A+ regulations, making it an alternative to an IPO and accessible to non-accredited investors. The amount of paperwork that must be filed is actually similar to that of an IPO. It took Blockstack 10 months and $2 million to complete the process. Not easy. We can think of this kind of offering as a fully SEC-compliant ICO for non-accredited investors.

And the reason Blockstack needed SEC approval is because it hopes the value of its token will increase over time. Therefore, investors who buy it expect a return on their investment. That’s a key part of the Howey Test to determine if an investment is a security that falls under SEC regulations.

Now, investors need to be very careful with Reg A+ deals like this.

This is not a private placement. And it’s not a security token offering. Investors who buy the Stacks token won’t get equity in Blockstack. They will get a utility token… which can be used on Blockstack’s network or traded on a digital asset exchange.

That’s an important distinction… But I don’t think many investors who participate in this deal will make it. And I don’t think investors are likely to understand the valuation of the crypto asset they are buying.

So while the SEC-approved Blockstack offering is a great step forward for early-stage blockchain companies looking to raise additional capital, it is far from being an attractive investment opportunity in the short term.

And remember to be careful with these Reg A+ deals. They may sound exciting and look good on the surface… But they can be terrible investments if investors don’t understand exactly what they are getting and the valuation of the assets that they are investing in.

Amazon is making moves in the prescription drug arena…

If you recall, Amazon bought PillPack last year for $753 million. PillPack does home deliveries… And the company thought Amazon would help it scale to get in with the big three pharmacy benefit managers in the industry: Express Scripts, CVS, and Optum. Those three companies control 80% of the prescription drug market. They are like the Triad.

In fact, many believe it’s these three companies responsible for high drug prices. They have been accused of keeping prices inflated for their own benefit.

Well, the good news is that Amazon is not interested in working with the Triad at all… It’s using PillPack to undercut them. Amazon wants to work directly with insurers and employers to get prescription drugs directly to consumers without the involvement of the Triad.

Think about that. Instead of waiting in line at the pharmacy, we will have our doctors simply send our prescriptions to Amazon. Amazon will then deliver the prescription within a day… and even within hours in top markets.

That’s incredibly convenient. Personally, going to the pharmacy is one of the few tasks I haven’t been able to automate yet. So I’m very excited about this.

And as a bonus, this will drive down drug prices if Amazon is successful. It will force the Triad to compete… which is something it hasn’t had to do in a long time. This is a much better solution than government intervention, which numerous politicians have proposed.

2019 has seen record “exits” for VC-backed IPOs. An exit is when a venture capital firm sells its stake in a company it backed while private.

As this chart from the National Venture Capital Association (NVCA) illustrates, we have already seen $188.5 billion worth of VC exits in the wave of IPOs that have hit this year. That’s an all-time record… And it’s only July. 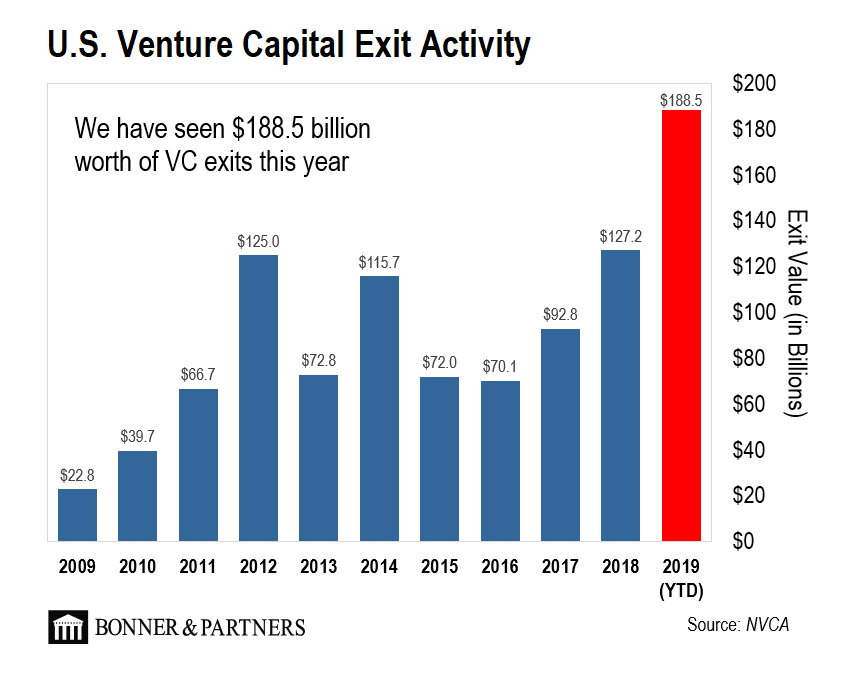 And guess what? It’s just getting started.

There are thousands of private companies out there lining up to go public over the next five years. The flood of IPOs that I predicted back in 2016 began last year and has been picking up pace this year…

Now, I know many investors will ask… Why should we care about VC exits?

The answer is, there is a virtuous cycle at work here. To get to record exit levels, VC firms first had to pour in record levels of investment. They had to finance all these bleeding-edge tech companies that are now going public.

This investment cycle leads to extraordinary wealth creation. Simply put, there is no better place in the market to invest in than bleeding-edge tech stocks. Investors won’t find a larger investment return potential anywhere else.

Let’s stay on the bleeding edge…

P.S. I’ve uncovered a way for everyday investors to gain access to early-stage technology companies without having to buy pre-IPO shares. That’s right… you can invest like the VCs.

It’s taken a very long time – about five years – to get the system just right. But I’ve done it.

In my more than 30 years researching and writing about technology investments and being an investor in technology, this could be the most important breakthrough I’ve uncovered to date. For “Main Street” investors looking to gain access to early-stage tech companies and see explosive returns quickly, this is the best way I know how.

I hope all readers can join me on July 24 at 8 p.m. ET. I’ll reveal all the details then. Save your spot right here.