A global pandemic, riots, protests, arson, nation-state cyberattacks… Nothing seems to be able to stop the U.S. stock markets and economic recovery.

Case in point, ZoomInfo just went public on Thursday. I was anxiously watching how the initial public offering (IPO) would be received.

ZoomInfo (not to be confused with Zoom Video Communications) provides a service to the digital marketing industry. It has a massive database on companies and executives that businesses pay to use so that they can market their services and advertisements and track the effectiveness of any given marketing campaign.

The company’s ownership changed a couple of times over the years under the hands of private equity. It is a decent tech company that delivered $293 million in sales last year. The estimated revenue for this year is around $550 million.

The stock was priced at $21 a share and started trading last Thursday. But get this: The stock opened up at $41 and change. It is now trading at $46.33 as I write this. That’s up 120% for those lucky enough to get an allocation to the shares pre-IPO.

But here’s the thing.

At a pre-IPO price, the company had an enterprise value of $8.7 billion. That would put its valuation at roughly 16 times this year’s estimated sales. That’s a rich price for a company like ZoomInfo. But at $46.33, we’re looking at a valuation of about 33.4 times annual sales.

That’s an unbelievable valuation and not one that I would ever recommend buying in at. But it certainly reflects optimism for the economic recovery and Wall Street’s desire for things to return to normal.

This is very bullish for future tech IPOs this year. In fact, companies in the pipeline are going to feel emboldened to move forward on the back of ZoomInfo’s strong IPO.

Companies like Tesla and Google’s Waymo are on the cusp of releasing fully autonomous vehicles. This will be a major disruption to the auto industry and put pressure on legacy automakers. But these incumbents aren’t going down without a fight…

Volkswagen just completed a $2.6 billion investment in autonomous driving company Argo AI. Argo AI is developing the technology to power self-driving vehicles. And it’s one of the biggest players in the space.

As we have discussed before, Volkswagen had been developing its self-driving tech through a subsidiary called Autonomous Intelligent Driving (AID). Now Volkswagen is going to merge AID with Argo AI. AID will become Argo’s European headquarters.

We don’t often see an established company merge one of its subsidiaries into an early stage company like this. Typically, the incumbent will simply acquire the private the company.

And the structure gets even more interesting…

If we remember, Ford has also invested in Argo AI. Ford plowed $1 billion into the company back in February 2017. Yet Argo AI remains independent.

So Volkswagen and Ford are effectively sharing Argo AI’s research and development costs. That’s unusual also, but it’s not surprising. Here’s why.

Neither one of these companies can afford to fund all of Argo AI’s autonomous driving development… or for that matter, their own in-house teams. Yet they both need Argo’s self-driving technology to survive. It’s no wonder they are sharing the costs while allowing Argo AI to remain independent.

This is what it looks like when legacy incumbents scramble to catch up to innovative companies that disrupt their industry. That’s Tesla in this case. And I’ll point out that Tesla is on track to generate free cash flow this year despite the COVID-19 pandemic and factory shutdowns.

I remember when critics said Tesla was doomed to go bankrupt, especially after the legacy automakers started producing electric vehicles. Don’t look now, but the reverse is much closer to the truth.

If Ford and Volkswagen can find a way to commercialize Argo’s technology quickly, they might stand a chance in the autonomous driving space. But they’re up against steep odds. As we know, Tesla is on track to launch fully autonomous cars by the end of this year.

The clock is ticking on these legacy automakers. We’ll see if they can rise to the occasion.

That’s 50% more users than Brave reported when it rolled out the latest version of the browser last November.

We first talked about Brave back in April of last year. For the sake of newer readers, Brave is a privacy-focused web browser that shares its advertising revenues with users. Here’s how it works…

Brave’s browser comes with a built-in digital wallet for its native cryptocurrency, the Basic Attention Token (BAT). For users who opt-in to view ads, Brave will pay out up to 70% of its revenue by depositing BAT in their browser wallets.

From there, users can trade their BAT for other cryptocurrencies. Or they can convert it into bitcoins (BTC) or ether (ETH) and convert those into U.S. dollars or another fiat currency.

That’s right. Brave users literally get paid to view ads. Here’s what it looks like… 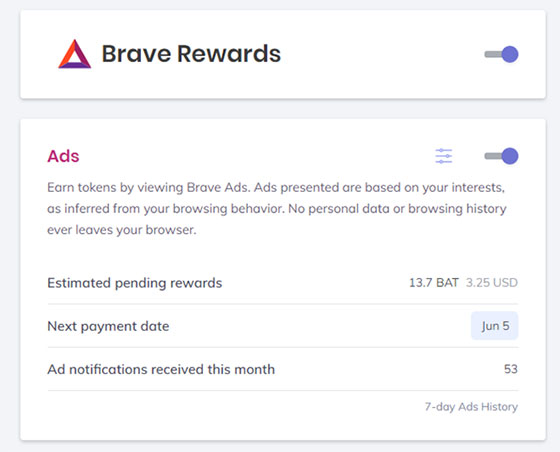 So Brave is picking up steam. And as a result, it is attracting a lot more advertisers.

My team and I have participated in Brave’s digital advertising program since it launched last year. At first, the only ads we saw were for niche blockchain projects. Today, we are seeing ads from companies like Verizon, CBS, Amazon, and even the Just For Men shaving company.

It doesn’t generate a lot of money yet, but that will change over time. The more users Brave gets, the more advertisers it will attract. That will lead to higher revenues, which means consumers who participate in the program will make more money.

This is the model that’s going to take down companies like Google and Facebook. I believe that a social media platform that employs the same business model will evolve as well. From my perspective, this is an inevitable direction for the industry. Consumers will gravitate to platforms where they get paid and still have the same level of functionality as Google and Facebook.

When Brave gets to the point where users can make meaningful money on the platform, it will become crazy for people not to participate.

Who would use Google, agreeing to be surveilled on all internet usage and having their data sold, when they could use Brave and make $25, $50, or perhaps one day $100 or more each month?

And get this – Brave ads have a clickthrough rate of 9%. That’s 4.5 times better than the industry average of 2%. And some strong brands have even seen clickthrough rates as high a 15% on Brave’s platform.

This level of engagement is transformational for the digital advertising industry. That means Brave is better for both consumers and advertisers. It beats Google in every way. Now it just needs to scale…

I’m very excited about Brave and the progress it is making. The company is at the early stages of exponential growth.

The PlayStation 5 is on track for the holidays…

Sony postponed its big PlayStation 5 (PS5) launch event due to the COVID-19 lockdowns and protests, and that led to speculation that the console won’t be ready by the holidays. But an update from Sony’s suppliers shows that the PS5 is right on schedule.

As we talked about last October, the PS5 will be powered by AMD’s new Ryzen semiconductor line. These chips are produced in Taiwan, and manufacturing just started last week. They are going to run like crazy through September to have all the chips ready for production of the game consoles.

Other key components, like the circuit boards, have already gone into manufacturing. Sony’s suppliers are ramping up production rapidly to make sure the console goes out in time.

So we can expect the PlayStation 5 launch to happen as the holiday season kicks off, just as planned. And this is an exciting turning point for the gaming industry.

The PlayStation 4 came out way back in 2013. It’s been seven years since we’ve seen a new release. In the tech world, seven years is a generational difference. The difference between the PS4 will be remarkable in terms of performance.

In addition to AMD’s chip, the PS5 will feature a solid-state drive (SSD) and bleeding-edge “ray tracing” technology. The SSD will allow the console to load more quickly. And the ray tracing tech will allow graphics developers to make incredibly lifelike games. Gamers will be blown away by the graphics.

And this comes at the perfect time. 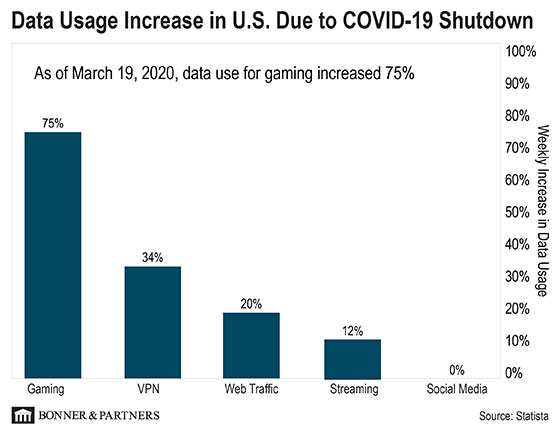 So we won’t be fooled into thinking that video game consoles are “just for kids.” This is serious technology operating in a fast-growing market. All technology investors need to pay attention.

The PS5 – and its competitor, the Xbox Series X – will be the largest gaming console launches in history. And they are happening at the same time! That’s great news for Sony, Microsoft (owner of Xbox), and suppliers like AMD. We’ll keep a close eye on this as the launch dates near.