That’s when I’ll be revealing exactly what “Mandated Money” can do for all of our portfolios. There’s a kind of special investment vehicle that is contractually obligated to protect our investment capital… and provide us upfront profits up to $2,300.

Then, long term, these investments can generate profits as high as six figures.

It may sound too good to be true. But there’s a reason our elected officials – and those that fund them – are trying to restrict these opportunities to just accredited investors… and keep these deals just for themselves.

It’s not fair. And in the midst of the current market pullback, it’s more important than ever that we find ways to grow our portfolios, and combat inflation and irresponsible monetary and economic policy.

So please, go right here to sign up to attend this event. This is an important briefing I want all of my readers to hear about.

A new way to gauge an AI’s ability…

We have a very timely artificial intelligence (AI) topic to discuss today.

Given the developments around Google’s LaMDA and Meta’s new AI that we highlighted last week, the industry has realized that we need a new tool to measure just how intelligent an AI is.

So 444 authors from 132 institutions contributed research to “BIG-bench.” It’s a new benchmark for measuring an AI’s abilities.

The Turing Test is simple by design. A human evaluator communicates with two participants via a chat screen. One is a human. And the other is an AI (software).

The evaluator’s job is to discern which is which just by asking questions through text. If an AI can consistently fool evaluators, then it has passed the Turing Test.

The problem is, the test was created decades ago. It’s too simplistic today given the incredible abilities demonstrated by advanced AIs like Google’s LaMDA.

And that’s where BIG-bench comes in. It consists of 204 tasks that an AI is put through. These tasks include everything from linguistic challenges… to playing competitive games… to writing software code… to solving problems using what we consider common sense. It’s a very diverse test by design.

This vast array of tasks allows an AI to demonstrate its depth and breadth of capabilities. That doesn’t happen with the Turing Test.

What’s more, the BIG-bench model contains problems that are not fully solvable with today’s AI software and computing power. So when the day comes that an AI can solve these problems, we’ll know we truly have a super-intelligent AI on our hands.

To me, this is a great forward-looking development from the AI community. It’s no longer about being able to fool a human evaluator… The BIG-bench test is designed to evaluate how “intelligent” and functional an individual AI has become.

Determining when an AI becomes sentient is an entirely different matter, and one that will necessitate years of debate. But if there is one thing I’m sure of, it is going to happen much sooner than most people think.

Does anybody know what happened to Web 4.0?

We have been closely tracking the rise of Web 3.0 in The Bleeding Edge. How could we not, as it’s the next generation of the internet using digital assets and blockchain technology?

The goal is to return the internet to what it was intended to be – free, open, censorship-resistant, and unhindered by the centralized control of big governments and corporations.

Well, Jack Dorsey just revealed his grand plans in a little-known subsidiary inside of Block (formerly Square) called TBD. It’s all about building a decentralized version of the internet that Dorsey calls Web 5.0. He skipped right over Web 4.0.

Web 5.0 is very similar to Web 3.0, except it is centered entirely around Bitcoin. Rather than enabling many different blockchain projects, each with its own native digital assets, Web 5.0 focuses on building applications on top of the Bitcoin blockchain.

In industry lingo, we can think of it as a “Layer 2” for Bitcoin.

Instead of giant corporations knowing everything about everybody, Web 5.0 users would be able to choose who they share their information and data with. 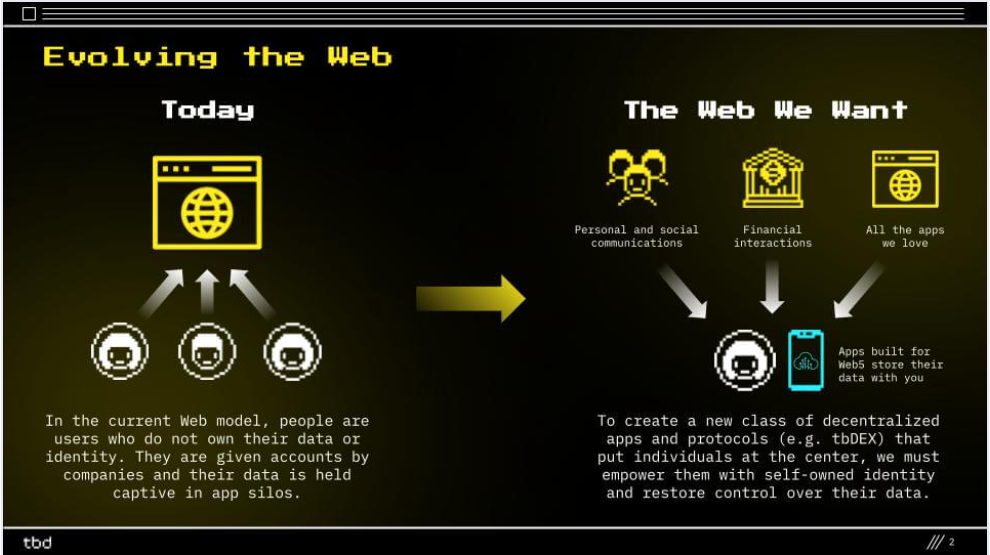 On the left, we can see the Web 2.0 model. People don’t own their own data. Instead, they must create accounts with every entity they interact with, divulging sensitive data to each.

On the right is the Web 5.0 vision. Users own all their own data. Then they share it only with the entities they interact with… and only for as long as necessary.

For example, let’s think about what happens when we take a trip. We book a hotel, buy a plane ticket, and maybe even rent a car in the city we plan to visit.

Each of these entities – the hotel, the airline, and the car rental company – could share our data with other companies in the city, basically letting them know we will be in town on those specific dates. Then those companies could start targeting us with advertisements because they already have all of our information.

In the Web 5.0 world, this couldn’t happen. If we wanted to keep our trip a secret, we would only share our data with those three entities we need to interact with.

What’s more, we could selectively share our data with applications that would make recommendations based on our own preferences and the location of our hotel. For example, a Web 5.0 restaurant app could show us the best dining options within a 10-minute radius of our hotel.

The key here is that only the application would get our data – not the other companies. In a Web 5.0 world, only those entities we share our data with will have access to it.

I love this. This is absolutely the direction the internet is headed.

That said, Dorsey’s Web 5.0 model isn’t a new idea. Internet pioneer Tim Berners-Lee has been doing a lot of work on his own blockchain project to enable something similar to what TBD is describing here.

So we don’t know yet if the march toward Web 5.0 will be led by current Web 3.0-style blockchain projects or Bitcoin-centric Web 5.0 applications. But either way, it’s headed in the right direction.

I doubt that the world of blockchain will be bitcoin-centric. There are simply too many other projects of substance that solve specific problems and use cases.

At a much higher level, the importance of these developments is a sign of what’s to come. The days of Google and Facebook’s monopolistic control over the internet are numbered.

CRISPR is solving a major nutrition problem around the world…

Research around a new kind of tomato just came out of the United Kingdom (U.K.).

It’s a tomato that looks, feels, and tastes like the tomatoes we know. But there is one major difference: It’s naturally loaded with vitamin D. This is a gamechanger for people living in places like Northern Europe where they don’t get a lot of sunlight at certain times of the year.

It turns out that tomatoes naturally produce vitamin D as they grow. But as the tomatoes ripen, they convert that vitamin D to cholesterol. At that point, consumers don’t get the vitamin D boost as a nutritious benefit when they consume the tomato.

However, CRISPR technology can change that.

For the sake of new readers, CRISPR is like software programming for DNA. It allows us to “edit” genes just like we use “cut” and “paste” features in Microsoft Word.

And these U.K.-based researchers just demonstrated how to use CRISPR to stop tomatoes from converting their natural vitamin D into cholesterol. It’s just a small tweak that doesn’t change anything else about the tomato or its genetic structure.

I see this as a huge development.

Think about this – globally, roughly a billion people are vitamin D deficient. A lot of people simply don’t get enough sunlight, which is our healthiest and most effective source of vitamin D.

And vitamin D is tied to immune health. People who are vitamin D deficient are more susceptible to getting sick and having severe symptoms.

In fact, we saw this explicitly during the COVID-19 pandemic. Outside of people who were morbidly obese, or those who already had multiple comorbidities, people who were vitamin D deficient were most likely to develop severe symptoms upon contracting COVID-19.

So these vitamin D-rich tomatoes could go a long way to promoting global health.

As a reminder, GMO foods are subject to heightened regulations compared to non-GMO foods.

For this reason, it’s both cheaper and easier for farmers to grow and sell non-GMO tomatoes. This dynamic makes it much more likely that farmers will adopt this new kind of tomato loaded with vitamin D.

So this is yet another fantastic application of CRISPR technology. We’ll see more and more agricultural-related breakthroughs developed using CRISPR in the next few years.

And the applications won’t just be for vitamin production… CRISPR is being used to make crops more pest and drought resistant, as well as to bear vegetables and fruits that have longer shelf lives.