Would you invest in GTX? 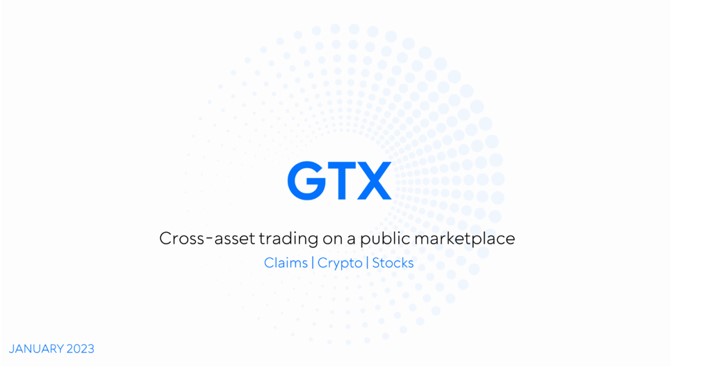 It kind of sounds like FTX, doesn’t it? In fact, the name GTX is a play on FTX… as G is the next letter in the alphabet.

What will GTX trade? So far, the exchange’s business plan is to make it easy to buy and sell bankruptcy claims from failed cryptocurrency companies.

Okay, I could see how there may be a market for that… but the people behind GTX are what make this plan nearly untenable.

Some of us might remember when TAC blew up on the back of Terra’s collapse. TAC was way overleveraged, experienced massive margin calls, and ended up owning $3.5 billion to 27 companies… What an unbelievable mess.

Perhaps that’s what makes the founders believe they’ll be great at building an exchange for other bankrupt assets?

But before any of us decide about GTX, there are a few more things to consider. Before getting into crypto, Zhu and Davies tried their hand in the foreign exchange markets – that didn’t end well either.

And after getting into crypto, their spending habits changed quite a bit. Seen below is the $150 million TAC yacht “Much Wow”. Nice! 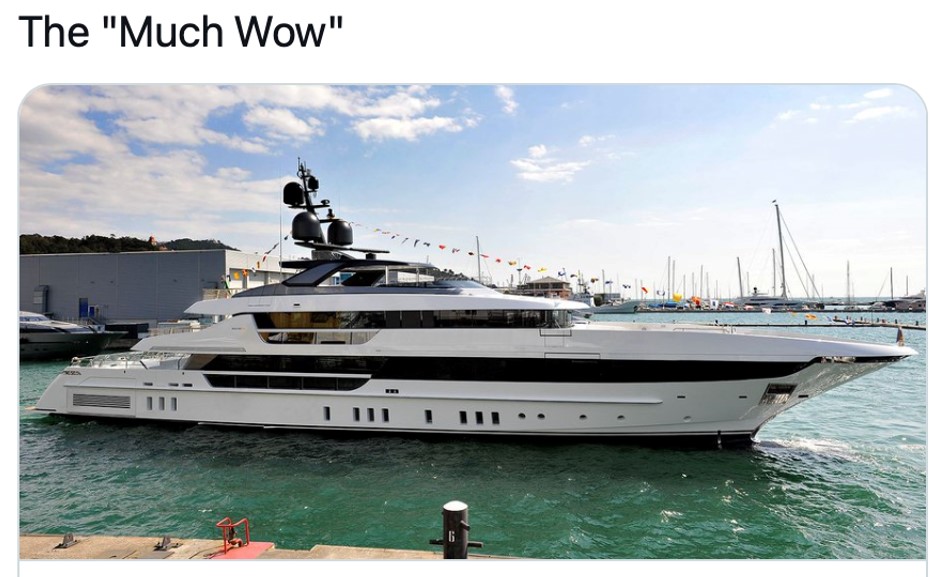 What was that old Wall Street adage about “where are all the customers yachts?”

And there is so much more:

The Three Arrows Capital collapse happened last summer. I have to wonder… do the founders think that everyone forgot about the $3.5 billion already? That takes some serious chutzpah to go out and try to raise $25 million and ask to be stewards of investment capital after the events of last year.

My humble advice… if anyone tries to sell you shares in GTX, please put your sneakers on and run, don’t walk, in the opposite direction.

This is a rare opportunity to get paid to develop the next generation of commercial air travel. Here’s a look: 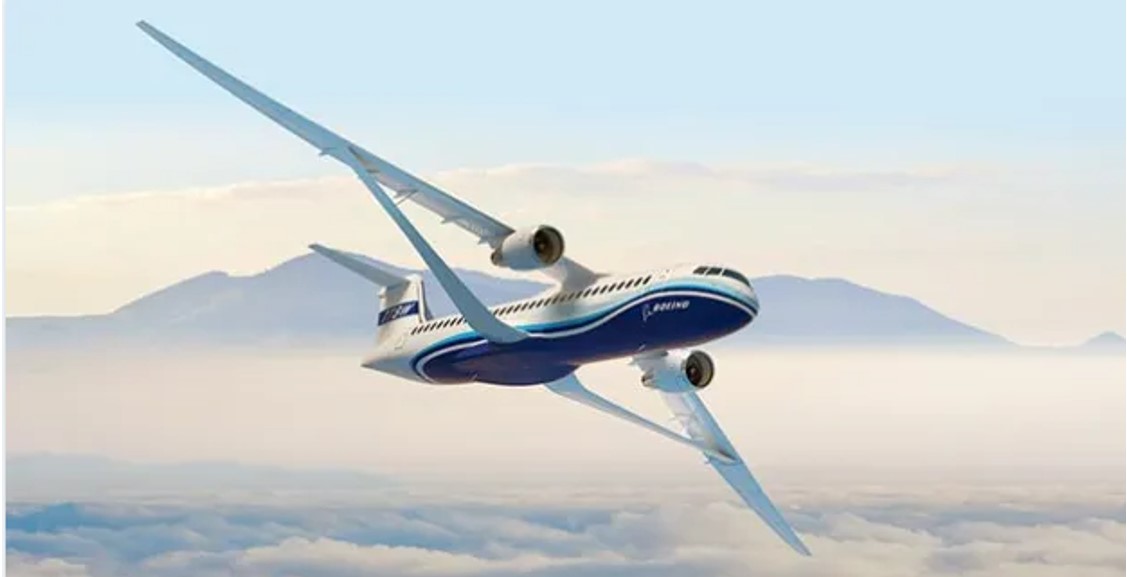 This is Boeing’s new Transonic Truss-Braced Wing design. It has two major innovations.

If we compare this new Boeing to a photo of a standard jet today, we’ll notice that this aircraft’s wings are much longer. In fact, they’re 50% longer. That allows the aircraft to generate more lift, as the surface area of the wings is larger.

Of course, this sounds like a simple thing. If longer wings create more lift, why hasn’t somebody done this before?

The answer is that longer wings require additional support. And that’s where the truss design comes into play.

We can see the trusses extend from the belly of the aircraft out to about the middle of the wings. They help support the longer wing size, and also help create additional lift. The truss becomes another wing of sorts, in addition to structural support.

The goal here is to have an experimental version of this aircraft ready for flight by 2028.

If this design reduces fuel consumption by up to 30%, it won’t take long for commercial airlines to adopt it for their new planes. The cost savings would be far too great to pass up.

We’ve talked before about how using electric vehicle (EV) technology simply won’t work for commercial jets. The batteries needed to power the plane would be far too heavy for it to be practical.

The industry knows this. That means there’s no getting away from jet fuel for the time being. So this is their solution to reduce fuel consumption.

The design doesn’t come without challenges, though. Longer wingspans require gates at airports to adapt. But it may find adoptions at less congested regional airports that can support a design like this – routes that are well suited for the smaller cabin sizes capable of transporting 130–160 passengers.

Are we ready for AI-powered doctors…?

As regular readers know, the pace of breakthroughs around artificial intelligence (AI) has been remarkable over the last twelve months. And the latest development is simply mind-blowing.

A group of researchers used OpenAI’s ChatGPT to take all three parts of the U.S. Medical Licensing Exam (USMLE). This is the exam all doctors must pass to become certified.

For the sake of new readers, ChatGPT is an incredibly powerful generative AI. ChatGPT can answer basic questions and write essays about any given topic. It can also compare and contrast different philosophies and opinions. And the AI can even write software code upon command.

And it turns out ChatGPT is also a medical whiz. That’s right – the AI passed all three parts of the USMLE.

Keep in mind this is a complex test that requires hundreds of hours of preparation… at least for us humans.

That in itself is remarkable, but there is something else. The AI had no specific biomedical training whatsoever. In other words, it wasn’t trained with information that was designed for it to become proficient enough to take the exam. It passed the medical exam simply by relying on its standard training set which was largely scraped from the internet. That speaks to just how incredible this AI is.

Now, imagine if we took this kind of AI and trained it on a data set consisting of only our accumulated knowledge around medicine and biology. In other words, what if we had the AI focus exclusively on the medical field?

The result would be an AI-powered doctor that could recall anything and everything related to medicine instantaneously. It would have perfect recall in every field of medicine. And it would never get tired.

Suddenly, we would have an amazing tool for enhancing human doctors. The AI could be a great resource and sounding board for practicing physicians. And it could offer support in differential diagnoses.

It doesn’t take much to envision such an AI becoming a standalone doctor. Especially if we think about developing markets where there’s a limited number of doctors available to serve communities.

We could empower every corner of the world with the absolute best medical knowledge. And these AI doctors would be available 24/7. No more wait times.

This is the future… a future of human augmentation, as well as the technology used to fill a void that the human labor force can’t fill.

What about AI-powered lawyers…?

We’ll wrap today up with a related development.

A professor at George Mason University just used Anthropic’s AI Claude to take an exam focused on law and economics. And again, the AI passed easily.

We talked about Claude just a couple weeks ago. This is Anthropic’s “constitutional” AI. It’s a genuine competitor to OpenAI’s ChatGPT.

What’s interesting here is that Claude took the same test that a class of GMU students took. And the professor had these tests blindly graded. That means the person grading the tests didn’t know which test was taken by the AI. This ensured that Claude’s test would be graded without bias.

And just as with ChatGPT, Claude passed this exam without any specific training on law and economics. It tackled the questions with only its standard training.

So that raises the question: What if we took an AI and trained it exclusively on law? We could train it on all the state-specific rules and regulations in the U.S.

Suddenly, we would have an AI-powered lawyer capable of passing the bar examination in all 50 states. And then it could analyze lawsuits based on their merits… without any human bias whatsoever.

Now, if I think about how long it takes for cases to go to court… and then for a decision to be issued… well, who’s to say an AI couldn’t be used as a judge? Plaintiff and defendants could prepare their written briefs and the AI judge would rule. I can imagine that a human judge could be in the loop to confirm that any early rulings weren’t wonky, but just imagine the efficiencies and timeliness that could result from the employment of this kind of technology.

The AI could eliminate the bottlenecks within our court systems. It could hear cases and analyze their merits all day, every day. And it could issue immediate rulings based on the specifics of the law.

Again, this could be another incredible tool for society. It’s going to be fun seeing just how far AIs like ChatGPT and Claude can go.