I continue to keep a close eye on the U.S. jobs report every Thursday morning. A big surprise in either direction will always have a direct impact on market sentiment.

While most headlines were negative, none of them compared to CNN’s zinger this morning: “‘Apocalyptic’ coronavirus surges feared in major U.S. cities…”

It feels like déjà vu… We can remember similar headlines from earlier this year… but none came true.

Here in The Bleeding Edge, we’re going to stick to the data, not CNN headlines. And as we discussed yesterday, we’re going to keep a close eye on the sharp divergence happening between new cases of COVID-19 and the daily death rates.

And we’ll review the numbers coming from the jobless claims and continuing claims reports. 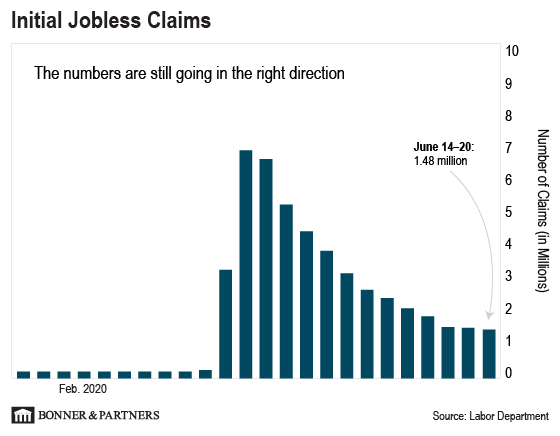 Initial jobless claims dropped a bit to 1.48 million. This number is down from last week, which stood at 1.54 million.

It is not a big drop, but it is in the right direction. I’m not surprised that the decline is not larger. After all, the fear engine is back in full force, focused on the new case “spikes” that we discussed yesterday.

But on the bright side, continuing jobless claims came in lower than what was forecast. Continuing claims track the overall number of benefit recipients. The number dropped by a million compared to last week’s numbers, down to 19.5 million.

This is what we want to see. As long as the numbers continue to drop, we’re heading in the right direction. If these numbers spike, we’re headed for trouble.

DoorDash’s sudden success signals a shift in the U.S. workforce…

For readers who don’t know, DoorDash is simply a market maker between restaurants and people who want meals delivered to their door.

Consumers order from their favorite restaurants through DoorDash’s app or website, and then DoorDash will have a delivery person pick up the food from the restaurant and deliver it to them. In return, DoorDash gets a commission on the sale.

This is a company that was bleeding cash and consistently unprofitable. DoorDash wanted to go public last December but then had to delay its plans because there just wasn’t that much interest at a reasonable valuation. It became clear that DoorDash would not be able to raise the funds it thought it could through an IPO (initial public offering).

As a result, DoorDash took on about $500 million in debt in February and March of this year. It looked like the company was just limping along, trying to buy time.

Then the realities of COVID-19 hit. Ironically, COVID-19 was the best thing that could have happened to DoorDash.

Suddenly, people couldn’t go out to restaurants anymore, and the demand for meal deliveries skyrocketed. In a matter of months, DoorDash transformed from a struggling company into one scrambling to hire more delivery drivers because business was booming.

On the back of this success, DoorDash raised a whopping $400 million in a Series H venture capital (VC) round last week. The company is now valued at an impressive $16 billion.

That makes DoorDash more valuable than companies like Domino’s Pizza, Tiffany & Co., and Fifth-Third Bank. Yet DoorDash is a company that owns nothing. It has no tangible assets. Not a single restaurant door front.

This also signals that the “gig economy” is experiencing incredible growth. COVID-19 shuttered many traditional businesses and left workers in a precarious position. As a result, many of them are shifting to gig economy work like DoorDash.

Today, 36% of U.S. workers participate in the gig economy. The Bureau of Labor Statistics predicts that figure could be as high as 43% by the end of 2020. Wow.

There will clearly be lasting impacts on society from this experience with COVID-19. The world’s reaction to the virus was a catalyst accelerating trends that were already in place.

And that has created the perfect window for DoorDash to test the waters with an IPO once again. I expect the company will find more interest this time around. And I believe we can expect an IPO before the end of this year.

Yet another private company is going to the Moon…

SpaceX gets all the press when it comes to private space exploration, but an early stage company called Rocket Lab is just as interesting in its own right.

For one, Rocket Lab’s Rutherford engine uses 3D printing for its primary parts. That has allowed Rocket Lab to produce an engine that is highly efficient, lighter, and capable of launching rockets into space. And get this. An entire engine can essentially be “printed” in just 24 hours. 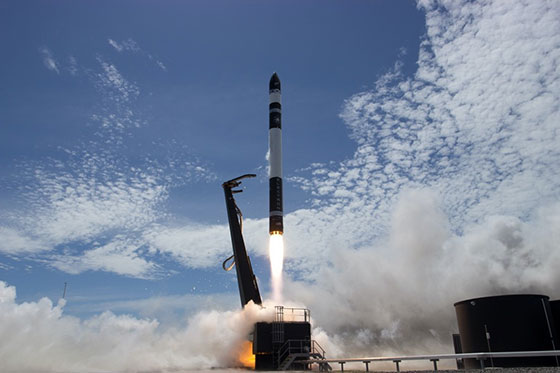 Even more exciting is that Rocket Lab was just awarded a contract to put its CAPSTONE spacecraft in orbit around the Moon.

To start with, Rocket Lab will place a smaller rocket in Electron’s payload to get a spacecraft to the Moon. Its Electron rocket will get CAPSTONE into low-Earth orbit. Then the second rocket will launch the spacecraft into higher altitudes, eventually taking it into the Moon’s orbit. 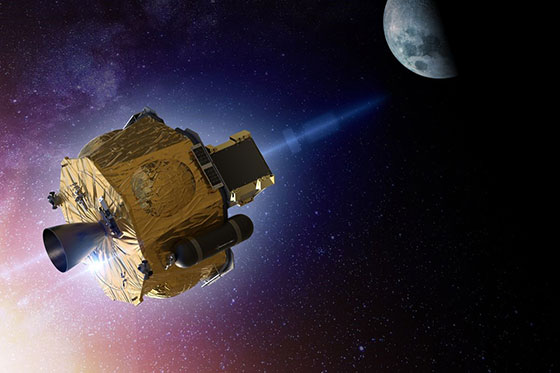 The other interesting angle here is that CAPSTONE will insert itself into what’s called near rectilinear halo orbit. This is a long oval-shaped orbit around the Moon.

We may wonder what the point of such an odd orbit is. Well, there is a method to the madness.

NASA’s current plans are to have a second space station that orbits the Moon in the same orbit as the CAPSTONE mission. It envisions this outpost as a “gateway” for both the Moon and beyond.

I love to see NASA working with innovative private companies like Rocket Lab and SpaceX to achieve these lofty goals, as opposed to relying on the large incumbents burdened with decades-old processes and heavy overhead, making missions remarkably more expensive.

A perfect example is Boeing, which still hasn’t been able to deliver a launch vehicle to get American astronauts to space. And even if the company can do it, the price tag of $90 million a mission will be 50% higher than SpaceX’s $60 million.

Regular readers will know Virgin Galactic as the first commercial space flight company to go public. We talked about that last October.

It was around 2012 when the vision of space tourism entered the picture.

Virgin Galactic planned to drop a small spacecraft from a larger plane already in flight. Then it would ignite the spacecraft’s rockets, propelling it 55 miles up into the atmosphere. That’s where customers could experience zero gravity. From there, the spacecraft would glide back down to Earth.

With its business plan solidified, Virgin Galactic went public last year by backing into a publicly traded shell company through a reverse merger.

The world has been anxiously awaiting the first commercial flights of its space tourism service, but in the meantime, Virgin just came out with an odd announcement.

The company said it wants to start an astronaut training program to take wealthy tourists on trips to the International Space Station (ISS).

This is strange because Virgin has no way to get passengers into Earth’s orbit on its own. There are only two ways to get people up to the ISS.

It just doesn’t make sense for Virgin to get into this business. It doesn’t have any experience or core competency. Nor has it even successfully launched its own business yet. It has zero revenues.

Plus, a company called Space Adventures has been doing just this – taking wealthy tourists to the ISS – for years. Virgin would have to compete with a very well-established player in the space.

So what is Virgin thinking here? On the surface, this seems like a terrible idea.

I suspect that this is just a public relations move. After going public, Virgin Galactic’s stock (SPCE) shot up 417% from November 2019 through February of this year. But the stock has been cut in half since then. It is down 57% from its February peak.

I suspect Virgin is trying to drum up excitement with this announcement to get the stock price back up and keep investors interested in space exploration.

I don’t want to see Virgin distracted by an initiative like this. It has a mission that it needs to stay focused on. It is far better to execute on its commercial space flight business first and then grow from there.