The inflection point for the beginning of the “spike” in new COVID-19 cases was around June 8. The media forecasted an Armageddon of deaths and told us to wait because there was a two- to three-week lag time.

Any objective journalist would display the current daily deaths alongside the number of new cases. We’re not journalists at The Bleeding Edge. We’re analysts, so we’ve done that for you below. 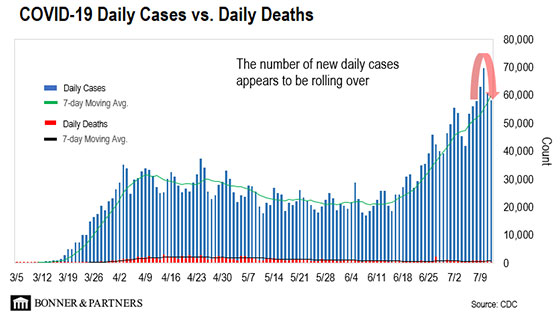 A few things should pop out at us when looking at this graph:

This is not what we’re told in the news. Two notable things are happening.

And as we saw on Monday, COVID-19 has been spreading mostly in the under 50 population, which is at far less risk of any severe symptoms.

And what is the response at the state level? Well, Los Angeles and San Diego schools announced that their campuses will not reopen in August. The teachers’ unions state that it is not safe to return to school. But there is far more to the story.

The Los Angeles teachers union will not support any reopening until its demands are met. These demands include defunding the police, implementing a moratorium on charter schools, implementing Medicare-for-All, and increasing taxes on the wealthy. Ironically, any demands that might benefit the children were absent.

And how many COVID-19 deaths of school-age children have there been in California (17 or under)? The below table is from the California Department of Public Health (CDPH).

In the middle, we can see clearly. There have been no deaths in children 17 and under.

Zero. Not one. In the entire state. During the entire pandemic. But the schools are not reopening if their demands are not met.

If you are a taxpayer and a parent in Los Angeles or San Diego, I’d love to hear your thoughts. Write to me by going right here.

As regular readers know, Magic Leap is my favorite augmented reality (AR) company. I even had the chance to test out Magic Leap’s headset last December. Here I am at an AT&T store in Manhattan. 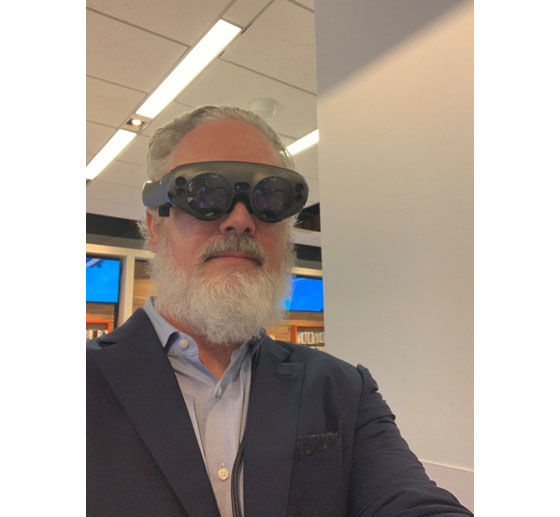 But it has been a bizarre seven months for the company since then.

Earlier this year, Magic Leap announced that it would have to lay off a large portion of its staff and refocus the business on enterprise applications. That was because the company just didn’t have the resources (cash) it needed to get its consumer AR headset off the ground.

Suddenly, in May, an undisclosed investor stepped up and invested $350 million in the company. That’s when Magic Leap changed course and said it wouldn’t cut as much of its staff. Shortly after that, rumors popped up that Magic Leap was looking to sell itself to a larger company.

And just days ago, Magic Leap hired an executive from Microsoft named Peggy Johnson to take over as the new CEO.

That’s a lot of action in the span of just a few months. And it begs the question: What the heck is going on at Magic Leap? Here’s the rub…

On the surface, it appears that Johnson was hired to take the company to the next level. But I have a very different read on this move.

Johnson spent about six years at Microsoft in a business development role. Before that, she worked at Qualcomm for 24 years. Johnson was actually at Qualcomm when I was there.

Why is this important?

Microsoft and Qualcomm are on the shortlist of Magic Leap’s most likely buyers.

We know Microsoft has strong ambitions for its own AR business, but it has had very little success so far. Magic Leap’s technology would suddenly make Microsoft a major player in the space.

As for Qualcomm, the company has long aspired to expand its business beyond semiconductors and patent licensing. And guess what? Magic Leap produces its AR lenses using semiconductor manufacturing technology. It builds this technology in-house to avoid the risk of intellectual property theft.

So it’s not a big stretch for Qualcomm to acquire Magic Leap.

And Qualcomm also has a history of overpaying for acquisitions. It isn’t drowning in cash like Microsoft. But with nearly $10 billion in cash and short-term investments, Qualcomm still has plenty of money to throw at Magic Leap. And it can always raise additional debt or issue more equity.

We know that we need at least another $1 billion investment to launch a mass-market AR headset. And we know that the most likely way is to get a larger company to acquire us. So we hire a person with deep ties to the two companies that would be our most likely suitors…

It makes perfect sense, doesn’t it?

Johnson wasn’t hired to turn Magic Leap around. She was hired to sell the company. That’s what this move is all about.

That said, I think Magic Leap’s technology would “die on the vine” with Qualcomm or Microsoft.

I’d much rather see a company like Google, Facebook, or even Snap acquire the company. They would be much better suited for taking Magic Leap’s AR headset to market.

We could also see wild cards like a private equity firm come in and make a bid. Or possibly even a stodgy old incumbent like IBM could step up.

Of course, my pick of the litter would be Apple.

I would love to see Apple buy Magic Leap and commercialize its tech. It would do a great job, and the final product would fit perfectly with Apple’s existing product line. Plus, Apple already has an app ecosystem that would facilitate app design for Magic Leap’s headset.

It’s a shame that Magic Leap likely won’t be able to stay independent. I had hoped this company could pull off its ambitions. It could have made an interesting investment target as a public company.

But now, we’ll just have to wait and see who picks up this early stage company. Let’s hope it’s somebody who can bring the technology to the mass market.

Tesla’s getting very close to producing its masterstroke…

What else can we say about Tesla (TSLA)?

The stock is up 253% this year. The share price has been on a near-vertical trajectory since late June. Investors are finally getting optimistic about this company’s future.

And while I think the stock has gotten a bit ahead of itself, the optimism for this company isn’t unwarranted.

Tesla CEO Elon Musk made striking comments at the World Artificial Intelligence Conference in Shanghai last week. He said that Tesla was “very close” to Level 5 autonomous driving capabilities. Musk said he thinks it will happen this year.

As we talked about last week, Level 5 is complete autonomy. That’s where a self-driving car can go anywhere, anytime, irrespective of conditions or weather.

Now, we know that Musk is known for making bold proclamations. He sometimes gets ahead of himself. But we also know that Tesla’s self-driving tech is the most advanced in the world.

Tesla vehicles will have driven more than five billion miles on Autopilot by the end of this year. And as they drive on Autopilot, these vehicles “learn” to drive better thanks to the billions of miles of data collected. That’s why the company has made so much progress in a short time.

And that’s why I believe that Tesla will indeed hit Level 5 autonomy this year or something very close to it.

Once the Level 5 tech is ready, every Tesla owner can upgrade by paying a fee. Then they can download the Level 5 software directly to their car.

What’s most exciting here is that Level 5 autonomy puts Tesla in a position to execute its masterstroke – a shared autonomous vehicle network.

This will be a ride-sharing network like Uber and Lyft… but for self-driving Teslas. Tesla owners can opt-in to the network when they aren’t using their car. And the car will go out and make money for them by giving people rides. Suddenly, owning a Tesla becomes a source of income.

Imagine what happens if a Tesla can make enough money each month to pay its own lease. At that point, the car is free. How many consumers will rush out to lease a Tesla then?

And we could get there as soon as next year. It’s coming faster than anyone realizes.

I’m sure many readers have seen the headlines about how Tesla is now worth more than several other top carmakers combined with an enterprise value of nearly $300 billion.

Some analysts are scratching their heads and saying the stock is doomed to crash from here. That’s because they think Tesla is a normal carmaker.

They are all wrong. And they’ll realize how wrong they were after Tesla’s pulls off its masterstroke.

The blockchain industry is about to get a big boost…

The world’s most popular cryptocurrency exchange started the process for a public stock listing, which could happen as soon as later this year.

Coinbase is one of the most successful blockchain companies in the industry. It has become one of the most important players providing services to both retail investors, as well as institutional investors. Its last known valuation was $8 billion after its Series E venture capital round back in October 2018.

Coinbase is now one of the largest brokerages of any kind. It’s also one of the largest exchanges for institutional investors for digital assets. Thanks to this growth, I expect Coinbase to go public with a $25–35 billion valuation.

This is certainly exciting for Coinbase, and it may be an even bigger deal for the blockchain industry.

One of the problems blockchain companies have had is that they are all private. That means they are not required to disclose their financial statements.

Because of this, regulators and government entities have been skeptical of what’s going on behind closed doors. This has contributed to a lack of trust.

That’s why I have long said that the industry needs its most credible companies to go public and show the world that they are buttoned-up, well-run businesses.

Five years ago, that wasn’t the case. But now many key players have matured. Now is a great time. The IPO (initial public offering) market is alive right now.

Over the next two or three years, I believe we’ll see several big names in the space pursue this route. This will be especially true for companies operating in regulated markets like Coinbase.

P.S. And I’ll see you tonight for my special online event, Timed Stocks Accelerated. The next “timed stock” on my radar is set to spike as early as July 30. Readers will certainly want to tune in to learn more. Go right here.