I want to remind you one last time about an event happening tonight at 8 p.m. ET.

Teeka Tiwari is a friend and colleague of ours. He strives to find profitable opportunities for his readers. And at tonight’s special event, he’s letting readers know all about “Tech Royalties.” They’re a special kind of investment that can provide investors with a steady stream of income… one that can even increase in value over time.

That’s especially important since other opportunities for investment income have virtually disappeared.

Teeka sees these Tech Royalties as the solution to this dilemma.

So if this opportunity sounds interesting to any of my readers, you can tune in tonight at 8 p.m. ET to find out all the details. Go right here to reserve your seat.

Continuing the discussion on bitcoin…

We talked yesterday about bitcoin eclipsing the $1 trillion market capitalization benchmark for the first time. That’s got the industry asking questions about whether the run will continue.

While I don’t usually find much value in the research coming from the big banks, an interesting piece of research from JPMorgan caught my eye.

Not unlike equities, most of the daily trading in bitcoin is conducted by high-frequency trading (HFT) algorithms. These are short-term trading programs designed to profit from small moves in bitcoin’s price. These HFTs provide critical liquidity to the bitcoin market.

And what’s interesting is that 50–60% of all trades into and out of bitcoin are facilitated by the U.S. dollar stablecoin Tether (USDT). In other words, over half of all bitcoin trades involve investors and machines moving their money from USDT to bitcoin and vice versa. 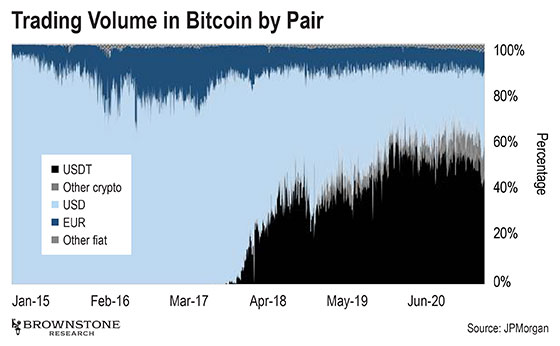 Regular readers of The Bleeding Edge will instantly recognize why this is a problem.

We talked just last month about how a New York court case was looking into allegations that Tether has not been backed one-to-one by U.S. dollars, as it claims.

As a reminder, for every USDT token that Tether issues, it is supposed to add $1 in cash to its reserves to maintain 100% backing. That’s the whole premise of stablecoins.

But the allegations in the N.Y. case state that Tether has been speculating in bitcoin. It has essentially leveraged its assets into an aggressive trade rather than adding more dollars to its reserves.

And as JPMorgan’s research points out, if Tether’s stability or solvency comes into question, it could pose a major problem for bitcoin. Since more than half of all bitcoin trades involve Tether, any instability could lead to a liquidity crunch in bitcoin trading. That could result in a crash.

Just yesterday, the New York Attorney General’s office (NYAG) agreed to settle the case. While Tether admits no wrongdoing, it and Bitfinex – a cryptocurrency exchange involved in the lawsuit – will pay $18.5 million as a part of the settlement.

And Tether will also provide quarterly reports about the composition of its reserves for the next two years. Hopefully, the increased transparency will keep it on its best behavior going forward.

But this still doesn’t give me much comfort. If Tether isn’t held to independent audits concerning its holdings, Tether can still get up to bad business. All it would take is for one aggressive trade to go sour, and there could be solvency risks.

This remains a systemic risk to bitcoin right now. If there were two or three other U.S. dollar stablecoins that had enough market cap to support an influx of capital in the event of Tether’s insolvency, I’d feel much better.

We’re not there yet. That’s why I keep a close eye on stablecoins and overall market liquidity.

As I stated yesterday, I remain bullish on bitcoin over the long term. In fact, readers who bought bitcoin after my initial recommendation in 2015 are up over 20,000% right now.

But I am very cautious right here. The digital asset has gone too far, too fast. We are seeing fast, speculative money chasing bitcoin right now. And HFTs are profiting from all of the action. This never ends well.

A startup called Precision BioSciences (DTIL) just published research on a genetic editing therapy it began testing on monkeys over three years ago. Members of my Early Stage Trader research service will be familiar with this company.

And the results it just shared are game-breaking…

Precision BioSciences’ therapy made edits to the key gene that is related to low-density lipoprotein (LDL) cholesterol, which is commonly referred to as “bad” cholesterol. High LDL cholesterol can lead to heart disease, stroke, and other cardiovascular problems.

And this therapy resulted in the monkeys’ LDL cholesterol dropping by an average of 56% with just a single dose. Remarkable.

But here’s the best part – the therapy appears to be permanent. More than three years later, the monkeys are still benefiting from lowered LDL cholesterol thanks to Precision’s therapy.

We are talking about the holy grail of precision medicine here. It’s a one-time treatment that addresses a serious health issue and lasts for years – and potentially for a lifetime.

What’s more, this research demonstrates that genetic editing therapies could provide permanent cures. And it’s not just for high cholesterol, but for any disease caused by genetic mutations.

This is something we have been confident about for years now. We just haven’t had the long-term data to support it. Most genetic editing therapies being studied today only have a year or so worth of data. That’s obviously not enough to gauge the long-term durability of these therapies.

I have no idea why this research hasn’t gotten more coverage. But this is incredibly bullish for the biotechnology industry overall. And this is particularly true for biotechnology companies focused on gene therapies.

I’m on record saying that the 2020s will be the decade of biotech, and this certainly strengthens my case. If any readers are interested in finding out my No. 1 biotech pick for 2021, go right here to learn more.

We’ll wrap up today with more exciting developments from the Red Planet.

As we discussed last week, NASA’s Perseverance rover has successfully landed on Mars. But what we didn’t talk about was what the rover has up its sleeve… so to speak.

Attached to Perseverance’s belly is a small drone dubbed Ingenuity. Its batteries are charging right now, but soon it will begin test flights to capture imagery from above the surface of Mars. 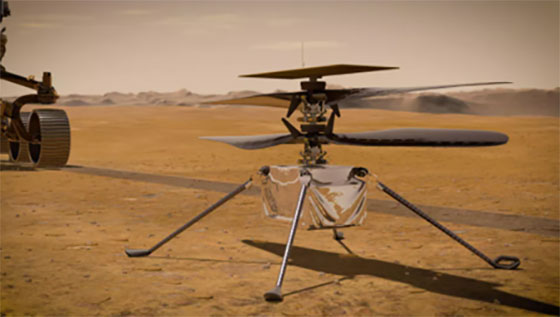 I can’t wait to see what comes back from Ingenuity. This is the first time we will have aerial images from an aircraft deployed on another planet. And that will give us a unique perspective that land rovers just can’t provide.

Mars’ atmosphere has only 1% of the pressure that we have here on Earth. That makes it difficult for aircraft to generate the lift needed to get off the ground.

NASA solved this problem by making Ingenuity incredibly light. The drone weighs only four pounds. And it has two counter-spinning blades that are about four feet across. These blades spin incredibly fast in opposite directions to produce the lift needed for flight.

And a solar panel on top of Ingenuity will power its autonomous flights once the drone begins its missions.

We will start to get images back from Ingenuity in about a month. The first images will be simple pictures from short test flights, and then we’ll get more and more interesting footage as the drone hovers around the Red Planet. I can’t wait.

Readers can expect an update in these pages as soon as the images start coming back to us.