Well, it finally happened… The Internal Revenue Service (IRS) issued guidance on how to treat “virtual currency” transactions (i.e., cryptocurrency transactions) from a tax perspective. Interested readers can see the details in the FAQs here.

In short, it is about as onerous as it could possibly be. Every virtual currency transaction is taxable. If a consumer purchases $1,000 of cloud-based computing resources in a cryptocurrency, they must determine the cost basis in U.S. dollars. Then they must record a capital gain or loss for each transaction.

For a taxpayer who makes hundreds of transactions a year, it would be incredibly difficult to determine the cost basis for each transaction.

To put it in perspective, imagine if all U.S. taxpayers had to record every purchase they made all year long. Imagine if they also had to determine the value of the U.S. dollar at the time of each purchase and record a gain or loss. Then they would have to report all the details to the IRS for the annual tax filing.

To make matters worse, most people who transact in cryptocurrencies purchase these digital assets at different times. That means that the cost basis is nearly impossible to determine for many/most transactions.

This is certainly not what the industry was hoping for. And it will discourage taxpayers from using virtual currencies for payment or services.

I’ll provide updates on this trend as I find them. But for now, let’s turn to our insights…

Sony finally put out details on its new gaming console. This will be the successor to the PlayStation 4 (PS4). The industry has been dying to know what the new console would be called…

Well, Sony dubbed the new console PlayStation 5 (PS5). I’m not sure why anyone expected something different.

Sony plans to release the PS5 in time for the 2020 holiday season. That’s roughly a year away. And the hardware is impressive…

Sony will base the PS5’s computer processor on AMD’s Ryzen semiconductor line. These are the top gaming chips on the market today. AMD will also provide the graphics processors (GPUs) for the PS5.

This is a big win for the company. We’ve written this year about how AMD is taking on Intel and even competing against GPU giant NVIDIA. This is just more proof.

Before you write this off as just for video gamers, here’s why you should care about the PS5…

The gaming industry is larger than the entire motion picture industry. It is a massive market.

In the U.S. alone, gaming is an $18.4 billion industry. Globally, gaming is a $105 billion market. And it continues to grow at a healthy double-digit rate every year. And in 2018, Sony products accounted for roughly 40% of all gaming consoles sold.

So this is a big business. Sony released the first PlayStation in 1994, and the company consistently launched a new generation of console every five years after. Yet Sony hasn’t put out a new console in nearly six years. Obviously, the technology – especially graphics processing – has advanced significantly in that time.

But here’s what really caught my attention…

The company did not give us any details on this… But I would be surprised if the PS5 didn’t include a voice-driven AI. After all, AI and natural language processing technology have advanced tremendously this year.

Plus, consumers would love this feature. Imagine being able to talk to characters in the game. Thanks to natural language processing, the characters could even understand what the gamer is saying and respond. That’s about as immersive as it gets.

This opens up a new world of applications that cannot exist with just a handheld controller. Game designers will have a field day.

So this is an exciting development – console gaming is about to change in a major way. The PS5 will surely become the most popular platform when it launches.

Get ready for smart clothing…

Central to this platform is the Jacquard Tag. This is a small electronic device that can pair with Android smartphones. It is smaller than a stick of gum… which means it can be stitched into any piece of clothing. And it allows users to control their smartphones with simple hand motions. 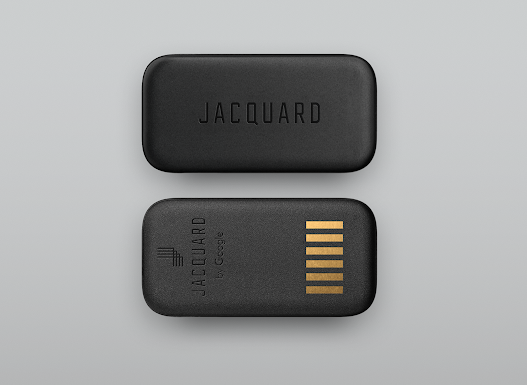 The Jacquard Tag can be programmed with an app on Android phones. Once programmed, users can move their hands over the tag in specific motions to have their phones do things like read text messages, recite the daily schedule, or take an incoming phone call… all without the phone coming out of the pocket.

And, of course, earbuds paired with the phone will link to the tag. That enables users to maintain their privacy in public places.

Levi’s clothing brand is the first adopter of Jacquard technology. Levi’s put out a denim jacket that has the Jacquard Tag embedded in the sleeve. So adoption has already begun. And I expect it to grow quickly from here.

This is an early indication of what’s to come.

Having electronics embedded in our clothing will become a lot more common. And that’s not only for the convenience factor. We’ll also see more practical applications develop – things like monitoring health… regulating temperature… and much more.

So if you start to see people waving their hands over their clothing in public places, now you’ll know why.

The tech that will make the Internet of Things a reality…

Fair warning, our last insight is a bit nerdy. But I encourage you to read on. It’s an incredible breakthrough.

You’ve likely heard the term the Internet of Things (IoT). IoT is the idea that we can have tens of billions – maybe even hundreds of billions – of sensors around the world, all connected to the internet.

These sensors could measure many things central to our lives. IoT could monitor traffic patterns… water distribution… waste management… electricity distribution… agricultural conditions… and all kinds of other things. This, in turn, will help us make more informed decisions in virtually all aspects of civil society.

Research firm Gartner identified IoT and edge computing (processing data near the edge of a network) as top technology trends that will impact and transform industries.

IoT isn’t a new idea. But it’s had one major problem. How do we power all these sensors? After all, it isn’t feasible to go about replacing billions of sensor batteries on a regular schedule.

MIT’s Auto-ID Lab, with the help of MIT’s Photovoltaics Research Laboratory, just made a breakthrough in photovoltaic sensor technology (which converts light to electricity). The group developed tiny sticker-like sensors that can monitor environmental conditions. They could be used to detect things like lighting levels, temperature, humidity, noise, and more.

What’s unique about these sensors is that they don’t need a battery. Instead, they generate energy from light… even when indoors. To be clear, this is not solar cell technology. Solar cells are bulky and expensive, so they wouldn’t work for this tiny sensor. The secret behind these photovoltaics is a material called “perovskite.”

Perovskite has shown fantastic potential as the next generation of photovoltaic material. A strong benefit is that the material can be printed using roll-to-roll manufacturing techniques. This results in thin, flexible, and nearly transparent cells. It is also a magnitude cheaper than current solar cell technology.

These photovoltaic sensors could solve IoT’s major problem. Since they generate energy from any kind of light, they can be placed anywhere. Indoors or outdoors… it doesn’t matter. And these sensors would have the power to transmit data every few seconds to provide constant updates.

I am excited about this development and the potential for perovskite to be the next breakthrough in photovoltaics.