Yesterday, I shared with you that Samsung and a group of Russian researchers used artificial intelligence (AI) to animate talking heads from a single image.

Not to be outdone, Google’s research division just put out research on what it calls “video inbetweening.” This is where an AI can watch the first and last parts of a video and then fill in the middle pieces.

Let’s take a speech or presentation given by someone important, for example. By feeding just the first and last few minutes of the speech into a recurrent neural network (RNN), a form of AI, the AI could create an entire speech as if given by the original speaker.

The AI could “speak” in the original speaker’s likeness, voice, and setting. The AI could be fed any text to fill in the content between the beginning and end of the speech.

This could potentially be a productivity booster. If we think about a simple application like newscasting, producers could feed the AI short start and end clips of a newscaster.

Then another AI could ingest real-time news in text form, write a news segment, and feed that back into the RNN to produce a nearly instantaneous news segment… all appearing as if it were delivered by an actual newscaster.

Of course, there is a dark side as well.

This tech enables bad actors to manipulate a presentation or speech in a way that’s hard to detect. By taking the first and last parts of a speech, the bad actor could distort the middle part… but keep the illusion that the manipulated speech is real.

That leads to some scary possibilities. It could lead to an explosion of deepfake videos that are even more realistic than the AI talking heads we talked about yesterday.

This is another example of how AI can be used for good or ill. That’s why ethical tech choices will be so important over the next 30 years.

But that also leads us to our next story…

A team out of New York University’s School of Engineering came up with one way. It developed a system to place “digital watermarks” on images and videos when they are created.

By the way, this system is powered by AI. It’s a case of good AI fighting bad AI.

There is already a serious market need to understand what is real and what is not. This is a potential solution.

I can imagine a future tech company that will specialize in inserting the AI watermark into the original source content and then providing some form of verification that is visible to consumers. We can think of this as a trusted verification of any content that we are consuming.

This will allow us to verify content without resorting to censorship.

Initial coin offerings (ICOs) were the blockchain industry’s means of raising capital in 2017 and 2018.

They are like initial public offerings (IPOs) except investors receive digital tokens instead of shares of stock (a security)… Therefore, investors in ICOs don’t receive any ownership in the company.

Most ICOs did not flow through investment banks or register with the U.S. Securities and Exchange Commission (SEC). The industry widely conducted ICOs in what it considered to be “utility” tokens, as opposed to “security” tokens. That made them easier and cheaper to launch. 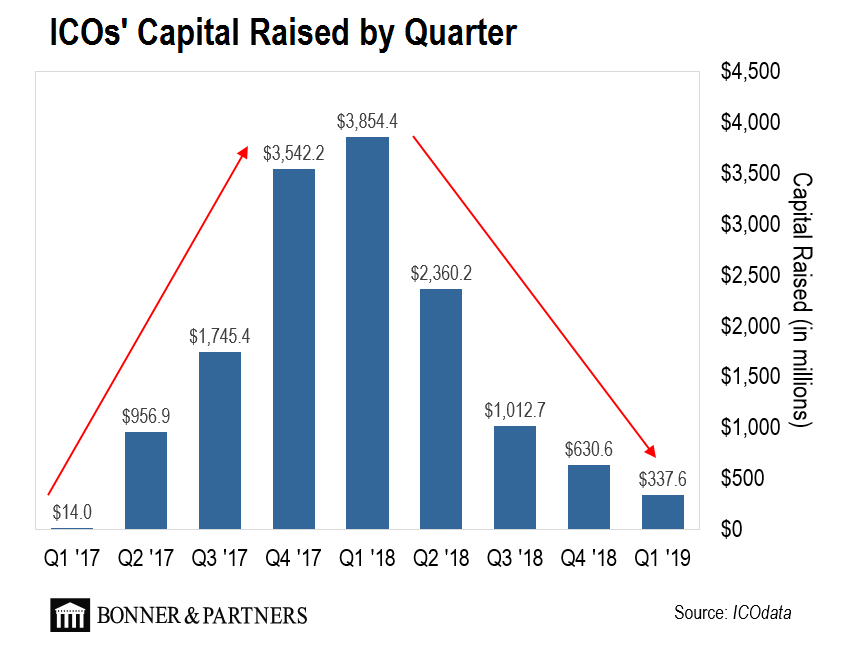 As you can see, ICOs went straight up… and straight down. There are two reasons for this…

Second, the U.S. and China both saw regulatory clampdowns on ICOs last year. That made it nearly impossible to do ICOs in those countries… which happen to be two of the biggest markets in the world.

In the U.S. in particular, the SEC started to get aggressive by issuing subpoenas to blockchain-related projects it considered to be conducting the equivalent of a securities offering.

As the market for ICOs slowed down, a new “fad” has taken its place… the initial exchange offering (IEO).

This is a bit more attractive than an ICO because it provides immediate liquidity for investors. They know they can sell the token any time after the IEO closes.

Compare that to ICOs, which often come with long lockup periods. In some cases, ICO investors cannot sell their tokens for several years.

In addition, IEOs are selling tokens at valuations that are much more investor friendly. Many ICOs sold at such high valuations that it was nearly impossible to imagine a positive investment return. That’s why most are now down 80% or more.

What’s more, investors get the benefit of at least some basic forms of due diligence on the IEO.

So IEOs are an interesting evolution. But I predict they won’t last long in their current form. Why not? Because what they are doing is still likely to be considered a securities offering by the SEC.

It’s no surprise these IEOs are not available to U.S. or Chinese investors… because they do not meet regulatory requirements.

Ultimately, IEOs will give way to security token offerings (STOs). STOs combine the ownership rights of traditional IPOs with the liquidity of digital assets.

The infrastructure for STOs is being built right now. We talked about that last month. And once the infrastructure is ready, STOs will be fully compliant with existing securities regulations.

Simply put, security tokens are the future. And when ready, they will give normal investors access to deals that only institutions and high-net-worth investors could get before.

P.S. And remember, mark your calendar for next Wednesday June 12.

I’m hosting a free tech investing summit for my subscribers. I’ll reveal four of my biggest predictions in the world of technology. I’ll also talk about the companies behind this tech that could make investors at least 10 times their money. You’ll want to be there. Reserve your spot here.