Van’s Note: Van here, Jeff’s managing editor. This week, we’re featuring a series of snapshots from Jeff’s presentation at the second annual Legacy Investment Summit in Carlsbad, California, this past September. Jeff presented on “The Year of Convergence.”

Yesterday, we shared Jeff’s thoughts on the exciting developments in self-driving cars (catch up here).

Today, Jeff delves into a new exponential technology that will change the world as we know it: augmented reality.

I’ve talked a lot this year about the roll out of 5G networks and the way this new generation of wireless networks will revolutionize the way we live. And today, I’m going to show you just one tech that 5G is going to integrate with and make possible… augmented reality (AR).

As my longtime readers will be aware, 5G is branching out to cities all across the country. 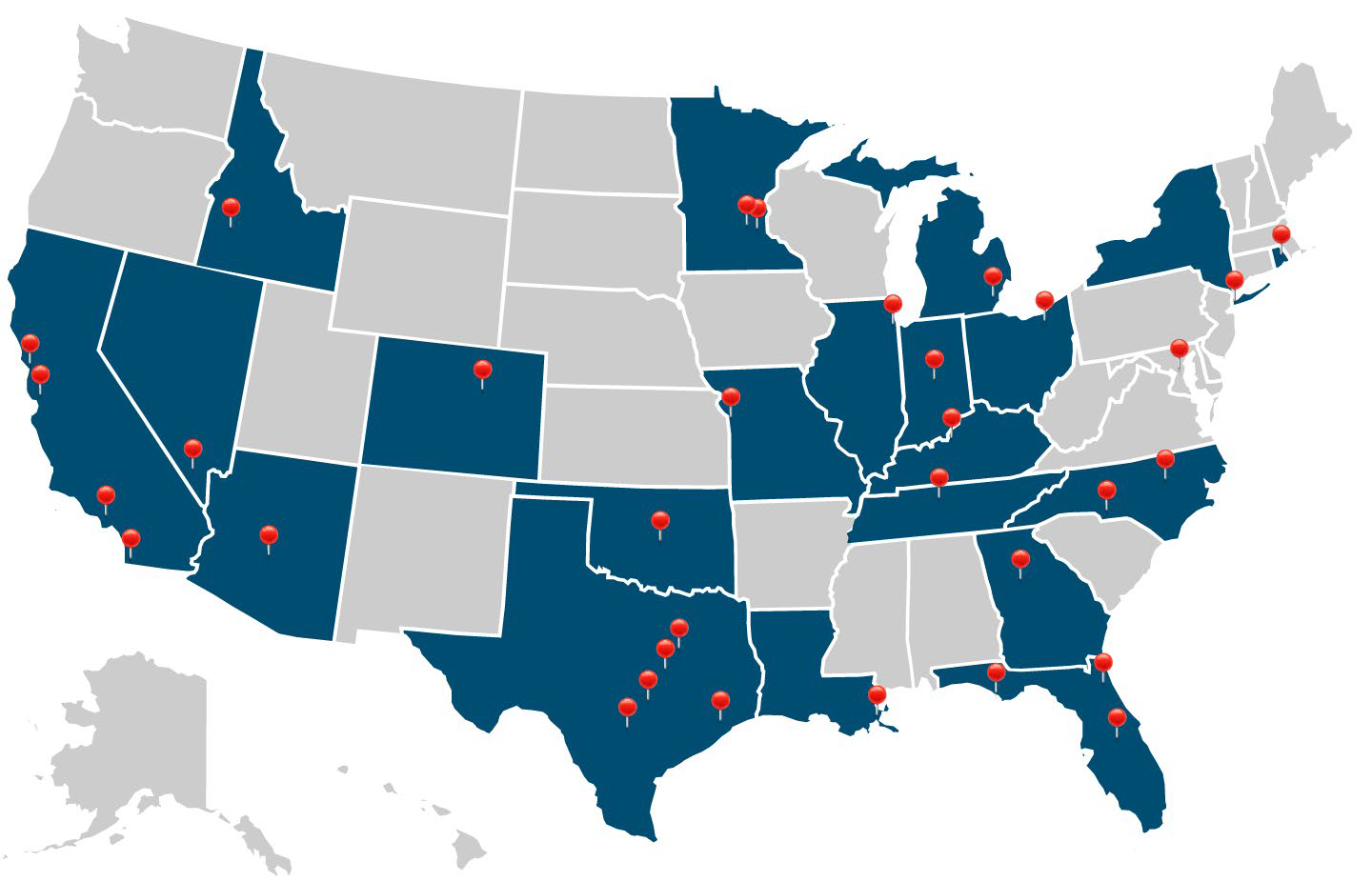 Verizon did something clever. It deployed 5G in 13 different NFL stadiums around the country. One of the great things about 5G is it can manage massive amounts of data traffic and phone calls in very small spaces, like a stadium, where you have 50,000–60,000 people. That’s what 5G is designed for.

T-Mobile is in the process of merging with Sprint. It will be a powerhouse when it gets the merger done. It’s already committed $40 billion over the next three years to build out 5G networks. This is a massive undertaking. It’s not in as many cities as Verizon, but where it’s deploying, it’s deploying a denser network. By 2021, T-Mobile’s 5G network will cover two-thirds of the U.S. population…

We don’t want to leave out AT&T: It’s in 19 cities, one of which is San Diego. So if you went to an AT&T store down in the city, you’d probably be able to experience 5G on a Samsung handset. That’s 19 cities across the U.S. And ironically, it was the first to demonstrate one gigabit-plus throughput on its wireless networks. Very exciting.

But AT&T did something strange. It launched a 5G network in Plantation, Florida, of all places.

That wouldn’t be on the top of my list of where to deploy it. But Plantation, Florida, hosts one of the most interesting tech companies right now… Magic Leap.

And Magic Leap is the hands-down leader in consumer-grade augmented reality technology.

It’s incorporating 5G networks into an AR headset to augment our normal field of vision, and here’s what it looks like.

The Magic Leap One Headset 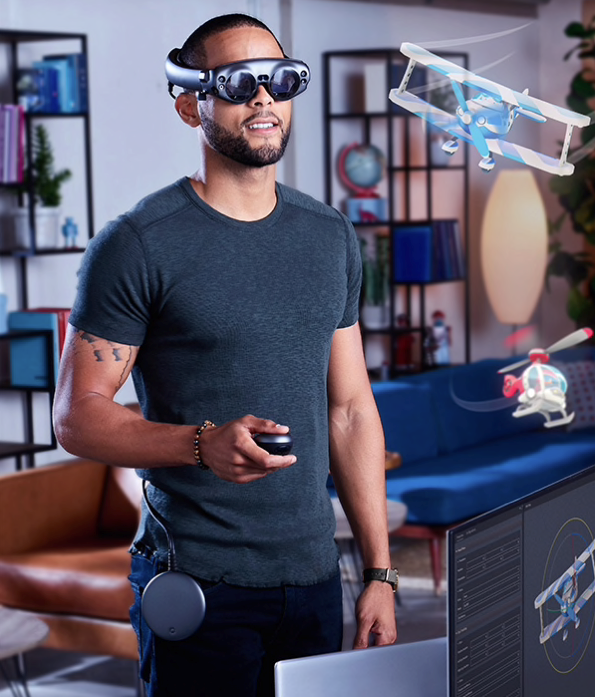 If you’d like to check it out, you can go to https://www.magicleap.com/store-locations to find the list of the cities that have AT&T stores where these AR glasses are available for you to test and experiment. I highly recommend it. Why? Because I’ve done it myself. 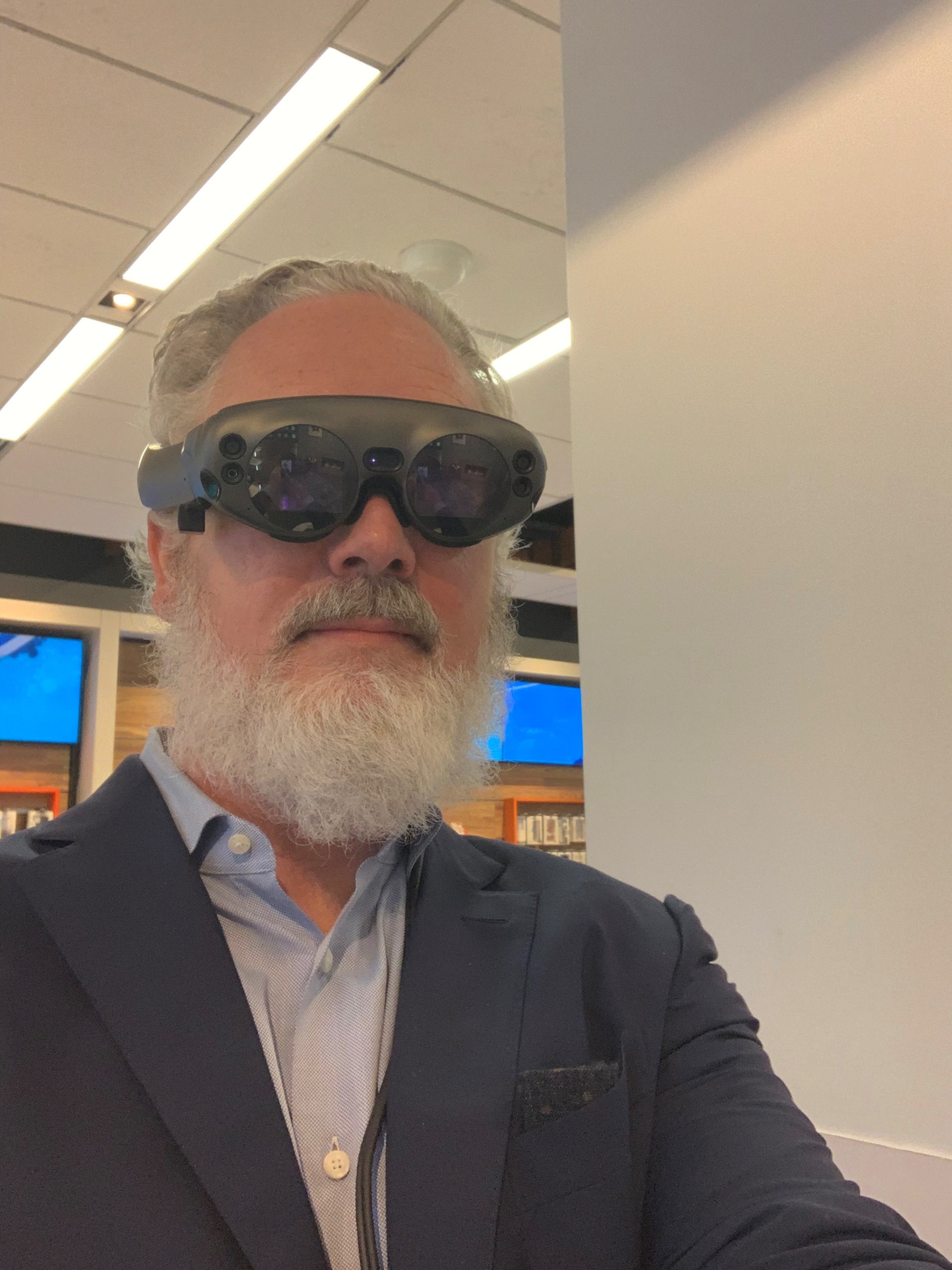 I walked into one of the flagship AT&T stores in Manhattan, and I said, “Hey, good morning. Do you have your augmented reality demonstration here?” And the guy goes, “What?”

And I said, “Well, you know, the Magic Leap glasses. I’d love to see them. I know AT&T has a partnership.” He’s like, “Glasses? We sell mobile phones.”

And so I walked around the store, I found the headsets, and I said to the guy, “Are these working?” He looked, and he said, “Oh man, I don’t know how to use that.”

And I thought, “I’m going to be in San Diego. I’m going to practice the local dialect.” So I said, “Dude, dude, you have the most leading-edge consumer-grade AR technology on the face of this planet in your store, and you don’t know how to use it?”

And, you know, in five minutes, I had the whole thing calibrated. I had it working.

It’s extraordinary. Magic Leap has shined with its lens technology, its optics. It manufactures them itself, and what you see is a full field of vision in a room while wearing these glasses.

And when you start the augmentation, graphics appear right before you, perfectly positioned. The depth perception is extraordinary. And literally before my eyes, a hole in the wall opened where evil robots with red eyes started coming at me.

You have to shoot the robots as they’re coming out. And the aim and the precision of the controller that you hold in your hand is remarkable. You interact with this augmentation while still seeing your normal environment and your peripheral vision. It’s extraordinary.

If you have a chance to go see it, it’s worth doing. It only takes a few minutes, and you will see the future.

AR eyewear will be the next massive multibillion-unit consumer electronics boom. It will eventually replace the smartphone.

These headsets are being empowered with artificial intelligence chips that process natural language, computer vision, and depth perception, so we don’t even need our hands to control them anymore.

So the future of this company is on my watchlist, and within the next 12 to 18 months, there’s a very good chance Magic Leap is going to go public. I’ll be watching it very closely.

But the most important thing about today is there is something underpinning all this technological development. There’s something that’s making it all happen. And guess what? It’s artificial intelligence and machine learning. This is what underpins everything…

P.S. Van here again. Be sure to tune back in tomorrow for the next part of Jeff’s presentation, where he explores the rapid developments in the realm of AI…