It looks like we’re on track for another record year of venture capital investment in the U.S. The numbers are now out for the third quarter.

As we can see in the chart below, while we saw a 14.5% decline compared to the second quarter, we are still ahead of venture investing compared to 2018, which was a record year. All it will take is another $35 billion invested this quarter, and 2019 will overtake 2018. 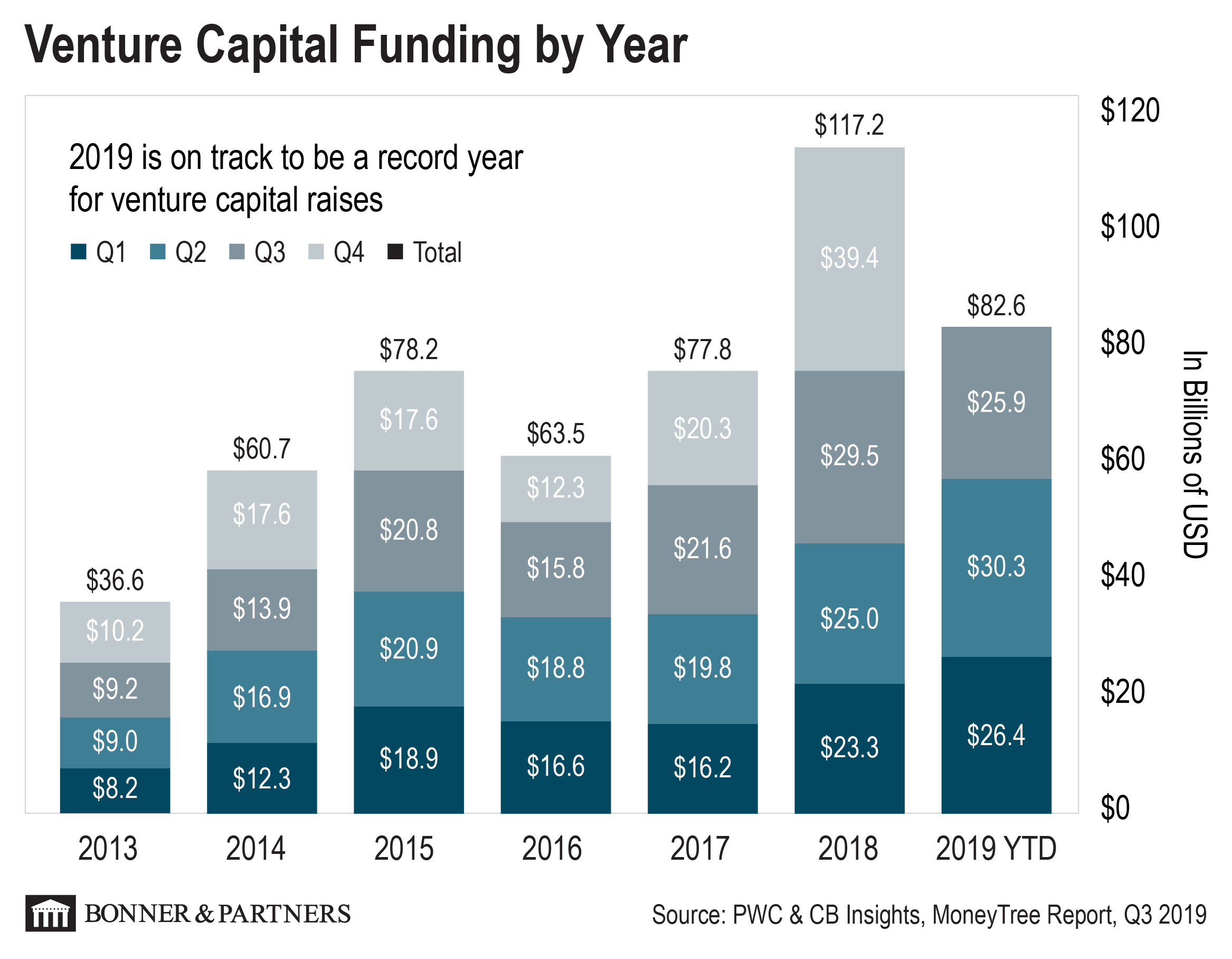 Q4 was the biggest quarter last year. I wouldn’t be surprised if we saw the same this year. The amount of capital flowing into private technology companies, of course, bodes well for the technology sector and its investment potential.

This investment is fueling the next generation of technological development. Private companies that are built with bleeding-edge technology and processes eventually become public, investable companies.

In fact, another record has already been set. As of the third quarter, there are 180 venture-backed “unicorns.” A unicorn is a company valued at $1 billion or more.

There continues to be an exciting pipeline of technology IPOs (initial public offerings) that we can anticipate over the next few years. I’ve never seen anything like it. We have a lot to look forward to as investors.

And before we turn to our main insights for today, I wanted to issue one last reminder…

My colleague Jeff Clark is hosting a free online trading summit tonight at 8 p.m. ET. As I told you yesterday, Jeff has a wealth of trading knowledge. When I was actively trading, I would read Jeff Clark to keep a pulse on the short-term moves of the market.

If you’re interested in more active trading, I encourage you to hear Jeff’s presentation tonight. You can reserve a spot right here.

Now on to The Bleeding Edge…

It calls the product Quantum Stealth. It is a paper-thin material that bends light around it, making whatever is behind it invisible. And it works incredibly well. It’s hard to believe… even when you see it.

On the company’s website, HyperStealth has more than 100 minutes of video showing the cloak in action. The videos demonstrate how it can cloak everything from humans… to equipment… to tanks… to aircraft. Had I just read about it, it would have been hard to believe… But once I saw the material in action, it was easy to see that it is very real.

What’s more, the cloak can bend ultraviolet and infrared light also. That means it can block an item’s heat signature in the thermal spectrum.

And if this weren’t incredible enough, the cloak does not require a power source. That’s because it is not powered by electricity. The material itself is what bends light. Incredible.

Obviously, military applications are the primary focus of this product. HyperStealth boasts the U.S. Special Forces, British Special Forces, the Marines, and other military organizations as its top customers.

But this isn’t only for the military…

This is just an incredible breakthrough. I am excited to see how this material is further developed. HyperStealth Biotechnology is currently a small, privately held Canadian company. We’ll certainly be keeping an eye on the company to see if it raises additional capital or even entertains a public offering.

Yet another application for AI in the medical field…

Yesterday, we talked about an artificial intelligence (AI) that works with radiologists to detect breast cancer. Today, we bring word of an AI that can identify people who likely have a dangerous genetic disease but don’t know it.

This AI was trained to comb through medical records to find people who likely have familial hypercholesterolemia (FH). This is a genetic condition that increases the risk of heart attack or stroke. And it’s interesting how this AI came into being…

Big pharma companies Amgen, Sanofi, and Regeneron funded this research. These three companies each have therapies to treat FH… but they have had a hard time selling them. That’s because insurance companies and benefits managers made it difficult for patients to get these treatments. They didn’t think FH was prevalent.

So these three companies funded a nonprofit called the FH Foundation, which in turn contracted an early stage tech company called Atomo Health to develop an AI to identify high-risk patients. Atomo trained this AI on three years of medical data from 84,000 patients at several prominent medical centers in the United States.

From there, Atomo bought a massive dataset from a data vendor called IQVIA. This dataset contained medical records on 170 million patients in America.

Atomo tasked the AI with combing through this dataset… and it found 1.3 million people who are likely to have FH.

Put another way, the AI analyzed 170 million medical records and found 1.3 million at-risk people. That’s like finding a needle in a haystack. There’s just no way a person or group of people could do this.

Of course, Atomo reported back to the three big pharma companies. It plans to work with health centers to contact the 1.3 million at-risk people to offer its therapies.

We’ll continue to see these types of AI-related health care innovations. As I mentioned recently, health care applications are by far the most popular destination for private capital in AI. Thanks to artificial intelligence, we’ll live longer and healthier lives.

In February of last year, fintech company Circle acquired cryptocurrency exchange Poloniex for $400 million. Circle, which is partly owned by Goldman Sachs, made this move to expand its budding blockchain business.

Well, Circle just announced that it is spinning out Poloniex and taking it offshore. It is moving the asset outside of the U.S. market.

And the reason for this is simple… Circle found it too hard to grow the business in the U.S. due to the regulatory climate. The regulations are too unfriendly to digital asset-related businesses.

Blockchain companies have always faced regulatory opposition here… And it has gotten worse. The Securities and Exchange Commission (SEC) has been clamping down on blockchain companies that have digital assets (cryptocurrencies or tokens), as we have talked about recently.

This is a perfect example of what I’ve been saying all along. The U.S. needs to have a light regulatory touch when it comes to blockchain technology and digital assets… Or else the country will drive innovation overseas. That means pushing jobs and economic growth elsewhere.

Blockchain businesses aren’t going away. In many ways, blockchain technology is the next generation of databases, money, payment systems, contracts, and many other things.

It is a transformational technology that reduces friction, saves time, reduces the expense, and improves the security of so many transactions that we do daily, and many aren’t possible without blockchain technology.

But business and innovation always move to where they are treated the best. Sadly, that’s not the U.S. right now. This is not the free market we hoped to see in this space.

So this does not bode well for the near-term future of digital assets here in the States.

But as my longtime readers know, I’m an active member of the blockchain advocacy group, The Chamber of Digital commerce (catch up here).

And rest assured, I’ll continue to push hard for digital assets, a healthy regulatory environment, and the freedom for citizens to be able to choose to invest their money however they wish.