I sincerely hope that everyone was able to enjoy some time with family and friends over the last couple of weeks. After the lunacy of last year, I think everyone deserved a break.

My wish and my hope are that the world can learn from the terrible mistakes of last year and move on… never to be repeated again.

That, however, may prove to be wishful thinking given what we’ve witnessed during the last two weeks. For those of us who tuned in, we were met with more fear, panic, irrational policy decisions, and threats of school closures, and more remote learning. No, thank you. We’ve had enough of all that nonsense.

So on to more positive things.

One of the most exciting developments over the holidays was the successful launch and release of the James Webb Space Telescope (JWST), which I wrote about before last year closed out.

The telescope was launched on Christmas day from Kourou, French Guiana, on an Arianespace Ariane 5 rocket. What a present!

Better yet, due to the precision of the launch and the first two mid-course corrections, the telescope has more propellant in storage than was expected. The result will be the extension of the operations of the telescope well beyond the next decade.

The propellant is critical in order to maintain proper orbit at its final destination, the second Lagrange point – L2.

L2 is a point of gravitational balance on the far side of Earth – the side away from the Sun. Being there will optimize the quality of the images of deep space that the James Webb Space Telescope was designed to take.

The telescope should arrive at L2 before the end of this month, establish its orbit, and begin the process of testing and configuration for full operations. We can expect to start seeing the most exquisite images of space that we’ve ever seen within just a few months.

And we can also be sure to discover the answers to many outstanding questions that we have about our galaxy and universe. And we’ll be certain to discover some things that we didn’t expect as well.

We have so much to look forward to this year.

Best wishes to all for a fantastic 2022, and a return of our lives, our freedoms, truth, and objectivity in science in the new year.

A social media rivalry gets even more interesting…

One of the most interesting stories in the history of social media involves two executives most have never heard of, brothers Cameron and Tyler Winklevoss.

While at Harvard, the twins hired Mark Zuckerberg to help them build a social media network called HarvardConnection. Zuckerberg left, took the ideas, and built what became Facebook.

Not surprisingly, in 2004 the twins sued Facebook and Zuckerberg in what became a long, drawn-out lawsuit. They settled for $65 million in 2011. It seems like a ridiculously small amount considering what Facebook has become, but we should remember that was a decade ago.

But it wasn’t the amount that was so critical – it was what the twins did with the capital.

Two years after the settlement, they took $11 million of that money and purchased about 1% of all bitcoin in existence at the time. Well… we know how that turned out.

They also started Gemini, which has become one of the largest cryptocurrency exchanges in the world. It has been largely held close to the chest, mostly self-funded… until now.

At the end of last year, Gemini took on its first major outside round of investors, raising $400 million. The capital was raised at a valuation of an impressive $7.1 billion. With institutional, corporate, and venture capital piling in, I wouldn’t be surprised if Gemini goes the route that Coinbase did, going public in two or three years.

But what’s interesting, and very funny, is what Gemini is planning on doing with the newfound capital. The plan is to deploy the capital on metaverse-related projects.

That’s funny because one of the biggest and most laughed at announcements of 2021 in the industry was Facebook’s name change to “Meta” and its aspirations to build “THE” metaverse… as if one company could own it all.

Given the background between Zuckerberg and the “Winklevii” (a moniker for the twins), it comes as no surprise that the twins have a very different take on the direction of metaverse technology. Gemini will be investing the capital in projects that have a far more decentralized, blockchain-native approach to building metaverses.

And it is obvious that this had been in the works. Back in November 2019, Gemini acquired Nifty Gateway, a non-fungible token (NFT) exchange. The acquisition was early in terms of the development of the NFT industry and yet foretelling of direction – NFTs are a critical part of metaverse development.

(To learn more about how to invest in the metaverse, go right here to see my recent presentation.)

Gemini has also invested in two of the most promising metaverse projects, Somnium Space and The Sandbox. And now that Gemini is cashed up, we can expect to see more.

And while the Winklevii may have appeared to have gotten the short end of the stick with Zuckerberg a decade ago, my money would be in their direction for the next 10 years.

“Everyday Robots” in the wild…

The Everyday Robots project has emerged from Google X, the secretive moonshot technology division of Alphabet.

It is always exciting to see what makes it out of the shroud of secrecy. After all, most projects fail, as they should. If that weren’t the case, it would mean the team wasn’t actually working towards moonshots after all.

Alphabet closed out last year by deploying more than 100 autonomous robots in its offices, challenged with a variety of tasks.

What makes them interesting is that they’re very full-featured in terms of technology. They aren’t designed to do just one thing well like an iRobot vacuum.

These robots are all wheeled with multi-jointed arms and dexterous grippers. They have multiple cameras for computer vision and even spinning LIDAR (laser imaging, detection, and ranging) for depth and imaging.

And these capabilities, infused with artificial intelligence, enable each and every robot to perform a variety of tasks.

For example, the company has the robots sorting through waste, picking out recyclables and materials for compost. They can also wipe down tables or pick up and deliver objects.

But the key is that these robots are capable of learning tasks. They don’t require hard programming just to perform an individual task. They are at the stage where they can learn, iterate, improve, and eventually master tasks.

Where is this going? I believe they called them Everyday Robots for a reason. Today, the Google Assistant is something that we access through a smart home speaker or screen terminal on a counter.

My bet would be that Google’s strategy will be for these robots to embody the future Google Assistant. And if Google/Alphabet has its way, it will want at least one in every home, surveilling, collecting data, increasing advertising revenues… And, ultimately, influencing the way we think.

Autonomous drone delivery takes off in the U.S.…

Walmart recently announced that it teamed up with drone delivery innovator Zipline for autonomous delivery in Pea Ridge, Arkansas.

Zipline was one of the earlier innovators in drone delivery and has been around for about a decade. Historically, it had been focused on delivering medical supplies to hard-to-reach areas, but it was inevitable to extend into commerce.

The partnership is the company’s first U.S. commercial drone delivery service, and I’m sure it won’t be the last.

The drones launch off of a long boom that acts in the same way that aircraft carriers launch fighter jets. Take a look… 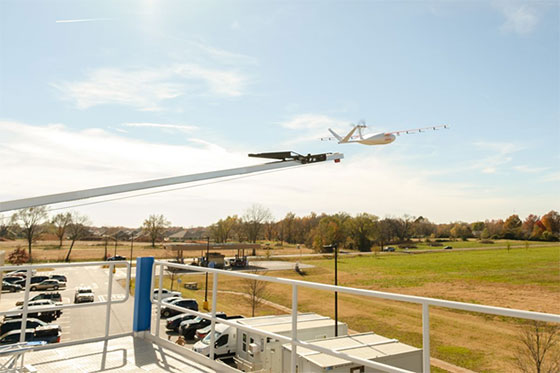 And when the drone flies over the scheduled delivery location, it simply opens up the hatch on its belly and drops the package. A small parachute is deployed in the process. 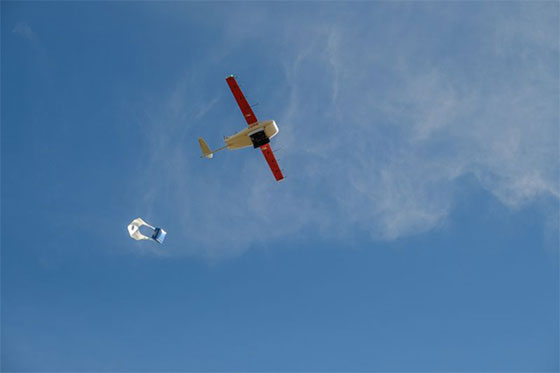 Obviously, this kind of technology isn’t suitable for urban locations. It only makes sense in rural areas with single-family homes with plenty of lawns to drop the packages onto. And that’s precisely the point.

Those kinds of markets tend to be more spread out, less dense, making it more expensive to serve via traditional delivery mechanisms. This kind of drone service can deliver small packages same day, or even same hour, for any urgently needed goods.

It’s easy to imagine Walmart’s that serve rural communities having a Zipline set up on their roof to quickly expand their e-commerce delivery business… and compete against their main competitor, Amazon.