Van’s Note: Van Bryan here, Jeff Brown’s longtime managing editor. On behalf of Jeff and the team, we wish all readers a Merry Christmas and happy holidays. We hope you enjoy your day with friends and family.

And welcome back to our end-of-year prediction series. In this series, I’m asking Jeff for his take on the biggest technology trends of 2020. And I’ll be asking him to make some predictions for the new year.

For today’s Bleeding Edge, Jeff and I sat down to discuss CRISPR genetic editing. As longtime readers know, CRISPR can correct “typos” in our DNA. And as Jeff has been sharing, CRISPR has the potential to cure every genetic disease.

Read on to see why Jeff is more bullish on CRISPR than ever… and discover the “second crop” of CRISPR profits that are coming in 2021.

Van Bryan: Jeff, let’s talk about CRISPR genetic editing in 2020. You’ve been covering this trend for a long time. Can you bring newer readers up to speed?

Jeff Brown: Sure thing. CRISPR stands for “clustered regularly interspaced short palindromic repeat.” It’s a mouthful. That’s why I just refer to it as CRISPR.

At a high level, CRISPR is a technology that can edit our genetic makeup as if it were software. Think about it this way. If there’s a “typo” in software code, it can have disastrous consequences. The program can crash or not function correctly. It’s a similar idea with our genetic code. When there are “typos” in our genome, it leads to different types of disease. CRISPR can correct these “typos” that lead to disease.

There are more than 6,000 diseases that are caused by genetic mutations – these “typos.” Things like cystic fibrosis, sickle cell, and predispositions to certain cancers are caused by these mutations. CRISPR has the potential to cure every one of them.

And yes, I’ve been covering this trend for a long time. To my knowledge, I was the first analyst to publicly recommend a CRISPR company. I did so in February 2016. But I had been researching the technology long before then.

Van: And the investment returns from your CRISPR recommendations have been great, wouldn’t you say?

Jeff: Absolutely. I knew they would be. But it’s always great to see readers profiting from my research.

We have several CRISPR companies as active recommendations in our Exponential Tech Investor portfolio. Out of respect to our paying subscribers, I won’t mention all of them. But I will mention one: CRISPR Therapeutics (CRSP). I first recommended CRSP in October 2016 during its initial public offering (IPO).

Keep in mind that hardly anybody understood CRISPR at this time outside of a few academic circles. Bloomberg and The Wall Street Journal weren’t covering it. But I knew the potential. Readers were able to get in around $14.

We held that position for about three years. We sold it for a 332% gain. Readers made more than four times their investment in just three years. That’s an incredible return.

Then, we let the stock pull back a bit before buying in again at the start of this year. Sure enough, the stock took off. We’re up over 170% – close to 3X – in about nine months.

Today, CRSP trades for just under $150. So it’s now 10 times higher from where I originally recommended it.

I’ve gotten several emails from readers saying that they’ve profited. So I’m happy to see that. 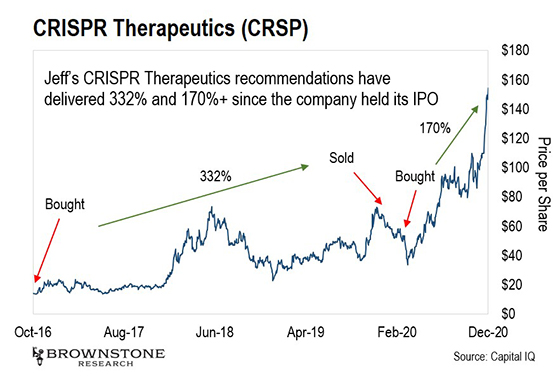 Van: Let’s talk about your CRISPR prediction for 2020. You actually had two. The first was that CRSPR would prove effective in treating or curing at least five diseases that were previously untreatable. Did you get that one right?

Jeff: I think I did. Right now, CRISPR trials are going on that have shown remarkable levels of efficacy for treating beta thalassemia and sickle cell anemia. Another CRISPR company has shown incredible early results for treating a rare form of degenerative blindness. The official trial results for that haven’t been released yet. But when they are, I expect that stock to soar.

And believe it or not, CRISPR trials have shown promising results addressing obesity in nonhuman primates. Other CRISPR trials were able to treat a form of hereditary deafness in mice.

Now, to be clear, none of these therapies have been Food and Drug Administration (FDA) approved. I didn’t expect them to be. But they show incredible promise at treating these conditions. So yes, I think that was an accurate prediction.

Van: What about your second prediction? You predicted that more early stage CRISPR companies would go public in 2020. Did you get that one?

Jeff: Oh, absolutely. That was almost too easy. The market opportunity here is so great, I knew that several new CRISPR companies would make their debut.

Two really stand out to me. One is an active recommendation in Exponential Tech Investor. Again, I won’t cover that one out of respect for our paying subscribers. But I will say that we are already up around 200% on this stock in just four months. Again, readers have thanked me for writing up that company. But this stock has 10X potential. We’re still in the early days.

[Van’s Note: Paid-up subscribers to Exponential Tech Investor can access their complimentary research on this CRISPR company by going here. And for readers who would like to join as a paid subscriber, go right here.]

But I will mention another CRISPR company that I have my eye on: Poseida Therapeutics (PSTX).

Poseida is a promising early stage company focused on genetic editing therapies to cure cancer. And the work Poseida is doing is bleeding edge. I have it pegged as one of my top up-and-coming genetic editing companies. Sure enough, the company filed to go public in June 2020.

So between Poseida and the newly public CRISPR company that I already recommended, I’d say I definitely nailed that prediction.

Van: It sounds like these recent CRISPR IPOs represent a second crop of genetic editing companies. Is that fair to say?

Jeff: Absolutely. That’s a great way to put it. For years, CRISPR was mostly a niche technology that wasn’t well understood. And during that time, there were really only three companies operating in this space. CRISPR Therapeutics was one of them.

But things are changing. CRISPR is no longer just theoretical. We’re seeing actual results. We’re treating diseases and seeing that this technology just works. And as a result, this “second crop,” as you said, of early stage CRISPR companies is going public and delivering incredible returns.

But I’d like to make one thing clear. This second crop of companies isn’t going to replace the original “big three” CRISPR companies. If anything, they are complementary. They’re targeting different therapy solutions in this market.

The thing for us to keep in mind is that the entire industry is effectively a greenfield opportunity. The size of this opportunity is in the hundreds of billions of dollars. There’s room for all of these companies to exist in this space. And there will be more.

That’s my prediction for CRISPR in 2021. I predict that two or three more genetic editing companies will hold an IPO next year.

Van: And you’ll alert readers when it’s time to invest in these new CRISPR stocks?

Jeff: Of course. They’ll be the first to know.

Van: Thanks as always, Jeff.

Van’s Note: Be sure you check your inbox on Monday for our next prediction series with Jeff Brown. I’ll be sitting down with Jeff to discuss artificial intelligence, and I’ll ask him for his No. 1 AI prediction of 2021.

And as Jeff said, CRISPR promises to be one of the most explosive tech trends of the new year. Is your portfolio positioned for it? Learn about the top CRISPR companies he’s recommending today by clicking right here.