The World Health Organization (WHO) found itself in hot water again this week.

On Monday, the head of the WHO’s emerging diseases and zoonosis unit, Dr. Maria Van Kerkhove, said, “From the data we have, it still seems to be rare that an asymptomatic person [with COVID-19] actually transmits onward to a secondary individual.” She went one step further, stating, “It’s very rare.”

The implications are very positive.

We now know from the data that the majority of COVID-19 cases are asymptomatic. In some populations, that percentage can be as high as 95%. If those who are asymptomatic are not likely to spread the virus, then that would be an argument to end the lockdowns and open economies up.

And we have witnessed success stories like Japan and Sweden, which have fared well by using commonsense measures that enabled them to avoid economic lockdowns.

However, Dr. Kerkhove later walked back her comments. Seemingly in an act of contrition, she reversed her previous comments with a revised statement, saying, “There are a subset of people who don’t develop symptoms, and to truly understand how many people don’t have symptoms, we don’t actually have that answer yet.”

If that quote didn’t make much sense, don’t worry.

It appears that the Harvard Global Health Institute was up in arms over the WHO’s position on this matter. This organization has been arguing for continued draconian lockdowns and keeping the economy closed until the U.S. can conduct tens of millions of COVID-19 tests a day.

While technically possible, we won’t be able to implement this task anytime in the next six to nine months.

What is laughable about the Institute’s position is that it conflates two different issues. Its major concern is about presymptomatic cases (infected individuals who have not yet started showing symptoms). We do know these people are capable of spreading COVID-19, just like those who are symptomatic.

The statements by Van Kerkhove refer to an entirely different category: those who are asymptomatic (those who test positive but show no symptoms).

It is appalling and frightening that those who share facts with the public can be “hushed” by powerful and influential organizations with different objectives.

We need to hear more of what Dr. Kerkhove wanted to say, not less.

Flying cars are on the way…

It’s become something of a joke over the years.

Venture capitalist Peter Thiel said it best: “We wanted flying cars, instead we got 140 characters.”

(He was referring to social media platform Twitter and its 140 character limit.)

It has taken longer than expected, but flying cars – more specifically, vertical takeoff and landing (VTOL) aircraft – are going to be here sooner than we think.

Google cofounder Larry Page began Kitty Hawk as a pet project. Kitty Hawk is one of the most interesting early stage companies working in this space. Its goal is to develop very light electric flying cars that anybody can use, even those without a private pilot’s license.

Kitty Hawk’s first project was named “Flyer.” This was a small aircraft designed to fly three to 10 feet above the water. And with 10 lift fans, it was geared for vertical takeoff and landing from the water. Check it out:

And Flyer was quite successful. Kitty Hawk built 111 Flyer aircraft and conducted more than 25,000 flights. It could even train people to fly the vehicles in less than two hours. That’s impressive. Users didn’t need to go through full aviation training or get a pilot’s license.

But the applications for a flying vehicle that only works over water are limited. For that reason, Kitty Hawk decided to shut down the Flyer project and shift gears.

And the company’s new focus is even more exciting…

It turns out that Kitty Hawk had a project named “Heaviside” running secretly in parallel with Flyer. Heaviside is an aircraft that looks more like a traditional airplane, except it’s sleeker. It’s fast, quiet, and can fly anywhere.

Heaviside can fly 100 miles at a time. And it can reach speeds of up to 180 miles per hour. Here she is: 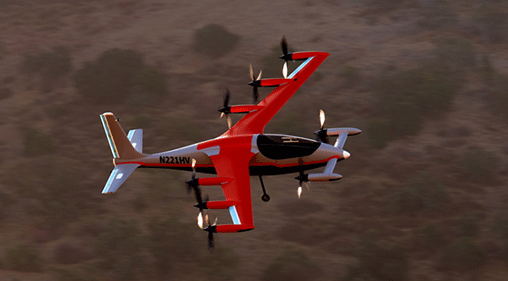 Kitty Hawk has been testing Heaviside for more than two years now. And here’s the best part – the aircraft can land autonomously.

As any pilot knows, the most difficult and dangerous part of flying is the takeoff and landing. Because Heaviside can land itself, it is safer and much easier to fly than a normal aircraft.

This is going to be a fun project to follow.

Light, autonomous aircraft like this could transform the entire aviation landscape. They could also completely transform how consumers travel from Point A to Point B. That’s especially true in a post-COVID-19 world where people are prone to move out of cities and into more rural areas.

With Heaviside, a four- or five-hour drive can become a one-hour commute. That makes it possible for people to live farther away from their office in the city yet still commute to work a day or two per week. That’s going to be an attractive value proposition.

The future of work post-pandemic is going to be different. Headquarters are going to shrink in size with the added benefit of reducing operating costs.

Employees will be encouraged to live and work from lower-cost areas, which creates cost savings for the company. And physical presence in the office will become less of a necessity.

I can envision in many companies that one day a week (or even once a month) in the office will be sufficient. This will open the door for a vastly improved quality of life for many.

This early stage augmented reality company is on the move…

Niantic has been one of the leaders in developing augmented reality (AR) technology. The company has created several AR-based games capable of running on modern smartphones.

For the sake of new readers, AR is a technology that overlays video, images, and data on top of the user’s actual surroundings. This can be done in a pair of glasses, windows, or smartphones and tablets. It overlays computer graphics on top of our real world.

The most successful application of AR to date is Pokémon Go, one of the games Niantic created. Pokémon Go has generated more than $3 billion for Niantic since launching in July 2016.

The object of the game is for players to find virtual creatures called Pokémon in their surroundings using their smartphone camera. When found, these creatures are displayed on the player’s smartphone within the context of his or her natural surroundings. This makes for an immersive experience.

And Niantic just made Pokémon Go even better… 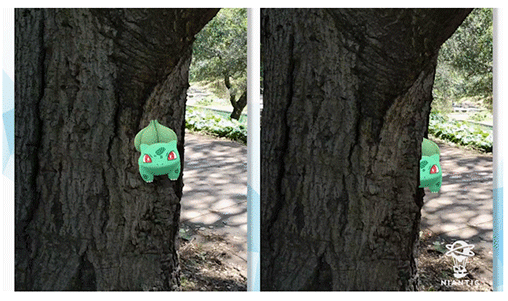 On the left is what the game looked like before. The virtual creature is overlaid on top of a tree. On the right, we see the power of 3D-sensing tech. It looks like the Pokémon is peeking out from behind the tree. The ability to do this is called occlusion. Game designers can essentially hide, or occlude, objects behind other objects.

However, what’s most exciting isn’t an improved Pokémon Go.

Niantic’s latest release announced a portal that enables players to upload videos of their surroundings. Niantic can then generate lifelike 3D maps of any location where it has players.

And if the company wants to map a specific location, it can put out a scavenger hunt through the game to get players to go to that area and upload videos.

What’s clever about this is that Niantic can crowdsource video and images at no cost. It’s all done through the game. And this data helps Niantic make its games even more realistic. Essentially, the company is crowdsourcing improvements to its games. Smart.

I believe this model will reshape the entire industry. “Gamification” like this will enable companies to build realistic 3D maps of the entire world. And that lends itself to all kinds of interesting augmented reality applications.

A new form of genetic editing can cure deafness…

We will wrap up today by talking about exciting research coming out of the Broad Institute of MIT and Harvard. A team of researchers has used a technique called base editing to cure deafness in mice.

Regular readers may recall that the Broad Institute was instrumental in developing CRISPR genetic editing technology. CRISPR corrects genetic mutations by using an enzyme to cut out an unwanted genetic mutation and replacing it with healthy DNA.

Base editing is different in that it doesn’t cut the DNA. Instead, it can “rewrite” the actual letters in the DNA sequence.

DNA is the building block of life. It is the hereditary material contained in every cell of our body.

All strands of DNA consist of a sugar, a phosphate group, and a base pair. The sugar and phosphate group are identical in every strand of a person’s DNA. They are the “backbone.” The base pair determines what genetic information is expressed.

So the only naturally occurring base pairs in DNA are A-T and G-C. When we talk about “letters,” this is what we are talking about. Here’s a visual:

Now, genetic mutations occur when one of these bases is transcribed incorrectly – that is, when the letters don’t match up properly.

Base editing technology corrects these mutations by “rewriting” the letters so that they match up correctly. In other words, base editing can change any single letter to any other.

When it comes to a certain kind of deafness in mice, the condition is caused by a single mutation. That makes it relatively easy to cure with base editing.

Using base editing, the team proved that the mice could hear sounds as quiet as 60 decibels, which is about the level of a normal conversation. That’s not 100% hearing, but it is still a remarkable achievement. The mice could hear again.

And here’s the kicker – this technique could easily be applied to humans. That’s the next step for the team at Broad.

I know what you may be thinking: “Thanks for the biology lesson, Jeff…” But what are the investment implications?

Well, base editing is an exciting technology that’s on the rise. Base editing is now where CRISPR was six or seven years ago. It is not a matter of being better or worse than CRISPR. This is another tool to help cure all human disease.

We’re finding that with some genetic mutations, different enzymes work better than others. The same will likely be true about using base editing versus CRISPR depending on the situation.

I first profiled CRISPR genetic editing technology in October 2016. Since then, one of the best-in-class CRISPR companies went on to climb almost 350%.

So we will see some exciting developments in base editing technology in the back half of this year. Research is really starting to pick up in this space. This is another powerful tool when it comes to eradicating all human disease.

And it could provide some incredible investment targets for us.

P.S. While base editing is just now gaining steam, CRISPR genetic editing technology is coming into its own.

That’s right – this company is using CRISPR to take blind people and make them see again. How incredible is that?

And here’s the best part: the first patient has already been treated in an FDA-sanctioned clinical trial. We are weeks – maybe days – away from data from that trial coming out, revealing to the world that CRISPR has the power to make the blind see.

I expect this company’s stock price to soar hundreds… maybe even 1,000%… after this news comes out. And that means this is a stock every tech investor needs to have in his or her portfolio. Simply go right here for all the details.