Today is the last day to access the replay of my Penny IPO presentation from last week. In it, I pulled the curtain back on a tiny subset of technology stocks that go public 100–300 times cheaper than most tech stocks today.

As regular readers know, I detest the fact that average retail investors have been locked out of the best technology investments of the last decade. Sure, hot tech companies like Uber, Slack, and Zoom finally went public last year, giving retail investors a chance to buy shares.

But these were large-cap companies by the time they went public. While the media touted them as the hottest small-cap tech stocks on the planet, the reality is that insiders had already pocketed the big gains. Retail investors got the leftovers. To me, that’s a problem.

Penny IPOs are the solution.

These are the most explosive early stage companies trading in the public markets today. And every serious tech investor needs to have exposure to this subset of the technology market.

That’s because these companies are entering the “4X Window” right now. That will lead to some big gains in the months to come. In fact, two of our portfolio stocks have spiked 75% and 100% in just the last four trading days… all in anticipation of the big announcements to come.

For anyone who is interested but couldn’t attend last week, please take advantage of the last evening to view the Penny IPO replay.

I’ll explain what the 4X Window is, and why it’s so explosive. And I’ll reveal how you can position your portfolio to take advantage of these little-known stocks – before Wall Street finds them.

Simply go right here to access the replay before it comes down tonight.

Yet another major AI breakthrough…

Earlier this week, we talked about how Microsoft got an exclusive license deal for OpenAI’s GPT-3. This is the artificial intelligence (AI)-powered text generator that has had Silicon Valley buzzing since its release on June 11.

GPT-3 can complete our sentences as we are typing them. It has been used to write entire technical manuals. And it even taught itself how to code. All it needs is for the user to tell it what to do.

For example, users can tell it something like, “Please produce a red button on my website that links to our homepage.” Then GPT-3 will write and implement the proper code, just as instructed.

Well, we just got another similar AI breakthrough, this time from the Allen Institute for AI. The institute just released an AI-powered image generator.

Users simply type in what they would like to see, and the AI creates an image from its own knowledge. 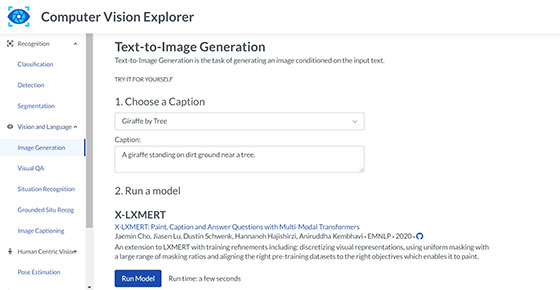 For example, we could type in “A giraffe standing by a tree,” and the AI will create something like this: 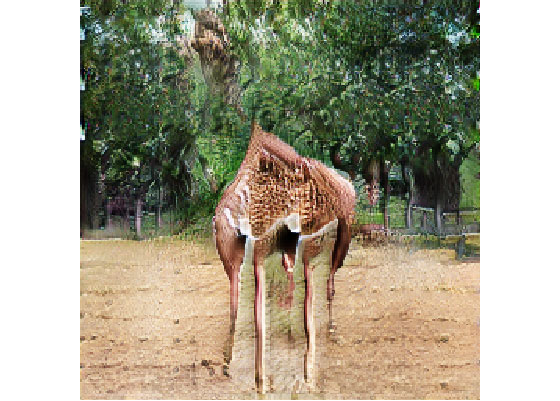 Now I know what we may be thinking.

But we should keep in mind that this isn’t something that the AI found out on the internet and modified. It literally created – or digitally “painted” – this image from scratch based on its knowledge of what giraffes and trees look like.

Here’s a simple analogy. If we were asked to draw a giraffe standing by a tree, what would our image look like? Unless we were practiced artists, it probably wouldn’t look that great.

Readers can try it for themselves right here.

In that sense, this is the exact opposite of the deepfakes we have talked about before.

Deepfakes are the result of an AI altering existing media content. In this case, the AI is creating a digital painting from its own knowledge. That’s far more impressive.

So this is another big breakthrough in the world of AI.

It’s not perfect yet – the image comes out blurry and distorted. But just as we would become dramatically better at drawing images over five to 10 years of practice, the AI is going to get dramatically better in the coming months thanks to its machine learning (ML) prowess. It will be able to refine its skills in a fraction of the time that a human learner would require.

That’s why this is such an incredible breakthrough. The foundation is in place for exponential growth in learning.

And the fact that this comes just months after GPT-3 burst onto the scene provides yet more proof that developments in AI are moving at a breakneck pace. Get ready for some exciting developments in the months to come.

The IPO market is on fire…

The third quarter of this year, which ends today, was the busiest quarter for initial public offerings (IPOs) since 2000 – the peak of the dot-com boom. And that’s amidst a global pandemic which won’t be over until after the presidential election. Incredible!

In total, 81 companies went public this quarter. And these offerings will raise nearly $30 billion for the companies involved.

We can compare this to the third quarter of last year, in which only 39 traditional IPOs occurred. And those offerings raised less than $11 billion.

Of the companies that went public this quarter, 54 operate in the tech and biotech sectors. That means 67% of all IPOs were in tech and biotech. That’s just more evidence that we are seeing a splintering in the market between the tech-savvy companies and legacy industries.

There were also two direct listings this quarter. That’s where a company goes public without raising money. They simply list and sell existing shares into the market.

The big one was Palantir, which we talked about on Monday. The other direct listing was Asana, which is a workplace productivity company. Both companies are freely trading today.

And in addition to these traditional IPOs and direct listings, there were 75 Special Purpose Acquisition Companies (SPACs) that went public in the third quarter. These are essentially “blank check” shell companies that go public and then look for a promising private company to merge into. This is a great way for private companies to back into a publicly traded shell quickly and at lower cost.

Now, I know comparing the current IPO market to what we saw in 2000 might sound unnerving. After all, 2000 marked the peak of the dot-com bubble.

But we need to keep things in perspective.

The year 2000 was undoubtedly a mania. Companies were going public at extraordinary valuations with little more than a vague business plan and a “dot-com” in their name.

That’s not the case today. These IPOs are for mature, established companies. Many of them have been in business for close to a decade. They’re a different breed than some of the IPOs we saw two decades ago.

Something big is happening right now. There are many incredible private companies going public, and we’ll see that continue through Q4 and into next year. The IPO market is alive and well.

And that means we’ll have some very interesting investment opportunities within the next twelve months.

A few weeks ago, the Wyoming Banking Board voted to approve Kraken’s application for a special purpose depository institution (SPDI) charter.

And of all the states, it is interesting that Wyoming is the most progressive state in the U.S. with regards to digital assets and cryptocurrencies.

This is a huge development for the digital asset industry. With its bank charter in hand, Kraken Financial now has access to the same payment infrastructure available to all other banks in the country. And it can conduct business in all other states as well.

But this doesn’t mean that Kraken will be like banks as we know them today. As an SPDI, Kraken is not permitted to lend money. It won’t issue any loans at all.

And as an SPDI, Kraken also cannot trade for its own accounts. In fact, it must keep 100% of its assets in reserve.

So Kraken will be by far the most conservative bank in the United States. It’s not even close.

And while Kraken won’t be able to lend or trade, it doesn’t mean that this isn’t great news for the company.

With Kraken Financial, Kraken will be able to offer custody services to its exchange customers for the first time.

To get the ball rolling, Kraken is now in the process of staffing up. The company has its board of directors and its senior management in place. Now it is in the process of hiring 10-25 department heads to build the business from the ground up.

And once the team is in place, Kraken will work to develop more financial services, in addition to custody, based around digital assets.

Now here’s the big takeaway that investors need to be aware of.

One of the biggest struggles for the digital asset space is the absence of legitimate custodian services. Retail investors may be comfortable holding digital assets on a hardware wallet. But that’s not an option for institutional investors. They need trusted custodians to oversee the assets.

Kraken Financial can now be that trusted custodian. And that’s going to open digital assets to a new world of institutional money.

What an exciting development for the industry. This is one of the key catalysts that will help take digital assets mainstream. We should expect that other major players in the industry will follow suit.

I absolutely love Wyoming. It’s one of the most beautiful states in the U.S. What they have done with respect to regulation in the digital asset space is surprisingly progressive for the industry.

Go Wyoming! I can’t wait for my next visit.