We are rapidly approaching my Timed Stocks Accelerated event, which will take place tomorrow, July 15, at 8 p.m. ET.

At this special event, I’m going to pull back the curtain on a small subset of stocks that go public with a timer attached to their share prices. When that timer hits zero, the stocks can explode hundreds of percent higher in a matter of hours, generating massive profits for savvy investors.

This is an investing strategy that very few people know about. For one, these stocks are just too small for the institutions to invest in. Plus, investors must wade through layers of government-mandated documentation to find these “timed stocks” and figure out when the timer will hit zero.

For that reason, I’m incredibly excited to share my research with you. Big money and big deals happen all the time in the world of tech investing, but too often these deals are reserved for the venture capitalists and the insiders. Typically, the everyday investor is left with scraps.

With these timed stocks, we’re flipping that model on its head. We’re reserving the big gains for regular investors.

And I’m not kidding when I say that these stocks can jump 100% or more in a matter of hours. I’ve done extensive research on this corner of the market for the last six years – and I’ve seen triple-digit gains happen in a single day on numerous occasions.

So if you’ve enjoyed The Bleeding Edge and perhaps my other research products, please join me tomorrow evening. I will unveil my timed stocks research and talk about my system for trading this tiny subset of the technology market. I promise this event will be well worth your time.

You can reserve your spot for the event right here.

Now on to our insights…

Facebook has been a top player in the virtual reality (VR) space ever since it acquired Oculus for $3 billion in July 2014.

The Oculus Rift has been the top VR headset on the market for years, and it looks exactly like we think a VR headset should. It’s a big and bulky set of goggles that users have to strap over their heads to use.

Up to this point, Oculus has been Facebook’s sole strategy for VR. But that just changed…

Facebook just released a paper ahead of the upcoming SIGGRAPH conference. This is the most important conference of the year for computer graphics.

It’s also where all the latest technology for virtual reality, augmented reality (AR), video processing, and graphics are on display. And Facebook’s paper revealed its future of virtual reality. 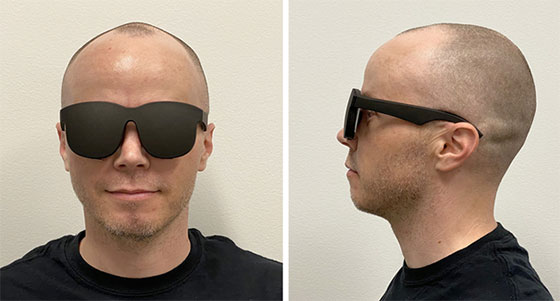 There it is. Facebook is working on a pair of VR glasses that look and feel almost like a pair of bulky sunglasses. These are a far cry from the large, face/head encompassing VR goggles we are familiar with.

Up to this point, virtual reality lenses have been thick and curved. They are designed to create distance between the eyes and the lenses, which allows the user to perceive depth. That’s why VR goggles are so big and heavy and sit so far out in front of our eyes.

Facebook employed the use of holographic optics in order to enable VR on a pair of glasses like the ones shown above. This technology employs a thin film on the lenses that can bend light as it hits them.

Then that light is folded several times over before it reaches the user’s eyes. That’s called optical folding. This creates the distance between the eyes and the images so the user can perceive depth.

The benefit here is that the VR glasses can be lighter weight and form-fitting. They are much more comfortable than the bulky VR goggles we are used to.

Facebook’s new approach has the potential to reshape the industry. Consumers will likely prefer the small, portable VR glasses to the bulky goggles. It will be interesting to see if the other players in the industry take this approach as well.

Imagine the applications for work and play…

We could “tour” the Louvre without ever leaving home. Or perhaps we’d like to sit courtside at our favorite sporting event. Have a work function? VR could allow us to “sit” in the audience at an industry conference as if we were really there. Amid a pandemic, these applications for VR make a lot of sense.

That’s the potential of VR, and it’s becoming even more important for a world that is increasingly working remotely.

Looking forward, I can see these glasses come out as a new product launch for Facebook in late 2021 or 2022 at the latest. I am excited to see how the market receives them.

Palantir is one of the oldest private companies in Silicon Valley. Based in Palo Alto, Palantir was founded way back in 2004.

Palantir’s business is to take in huge amounts of data, analyze it, and extract key insights. It uses artificial intelligence and machine learning to find patterns and key data points that human analysts would likely overlook. Basically, the company specializes in finding the needle in the haystack.

At first, Palantir focused on government intelligence agencies and the military. In fact, the venture capital arm of the CIA, In-Q-Tel, invested $2 million into Palantir back in 2005 in its Series A round. Palantir was worth a mere $5 million at that time.

Given the scope of its work, Palantir has been very secretive over the years. Since private companies don’t have to make any public filings, it has been hard to get much information on Palantir’s operations. But that’s about to change.

Palantir has now expanded its business to support large enterprises as well. We’ll learn a lot more about what the company is up to with the upcoming IPO.

Looking at the numbers, Palantir has raised nearly $3.4 billion to date. Its last known valuation was $20.3 billion, and that was back in 2016.

The company has taken in additional investment since then, so there’s no doubt that Palantir will go public at a valuation much higher than $20 billion. I wouldn’t be surprised if the company went public in the range of a $40–50 billion valuation.

That will make a fantastic payday for the original private investors, who have had to sit on this investment for the past 16 years.

Doing some rough estimates accounting for dilution, at a $50 billion valuation, the CIA’s stake could be up as much as 2,500x its original investment, turning that $2 million into potentially $5 billion.

That’s a long time to go without any return on investment, but clearly, the CIA’s wait will have been worth it. Palantir has been one of Silicon Valley’s greatest success stories of the last 15–20 years.

And it’s going public at the perfect time. The IPO market is recovering well from the economic lockdowns earlier this year, and Palantir’s IPO stands to do very well.

That said, I would not recommend Palantir at the time of its IPO. Unless investors can gain access to pre-IPO shares, its valuation is likely to be too inflated for it to be a good investment after it starts trading.

The IPO market is not rational right now. But I will watch the company closely from here. A future pullback could make for a great investment opportunity.

The death of Hong Kong…

We’ll wrap up today with a discussion about the unfortunate events taking place in Hong Kong right now. This is having a direct impact on the world of high tech. It’s too important not to talk about…

In a law enacted overnight, it is now illegal to post any content online that is considered a “breach of national security” in Hong Kong. And that means anything that runs counter to the government’s propaganda machine.

The government can now order platforms and service providers to remove any content it doesn’t like, and it can demand identifying information as well.

What’s more, this new law says that even foreign companies are subject to fines and imprisonment for failure to comply. To be clear, that means that U.S.-based technology companies like Google and Facebook would be liable if they display something pro-Hong Kong that Beijing doesn’t like.

If a foreign technology company complies with the law, that company would hand over personally identifiable information concerning the person who “violated” the law.

Imagine the People’s Republic of China going after a French, German, British, or American national on foreign soil.

China’s great internet firewall has finally come to Hong Kong. This is heartbreaking.

Hong Kong citizens have known nothing but freedom for generations. That freedom made Hong Kong one of the greatest economic success stories the world has ever seen. I’ve spent more than a year of my life there and visited more than 100 times.

Hong Kong was little more than a barren island at the end of World War II. In 1950, its GDP per capita – the country’s economic output per person – was less than $4,500.

By 2019, Hong Kong boasted a GDP per capita of over $49,000. That made Hong Kong the 15th most productive country in the world – ahead of Germany, Israel, the United Kingdom, and Japan. And it was long rated one of the freest societies on Earth.

Prior to the handover of Hong Kong from the U.K. back to China, Hong Kong was the top destination for foreign companies to set up a regional headquarters in Asia. Since then, there has been a steady stream of moves from Hong Kong to Singapore.

I was working in Asia back in 1997 when the U.K. handed Hong Kong back over to China. Some companies saw the writing on the wall back then and moved out of the country.

That’s why Singapore has boomed over the last two decades – it took in many companies that would otherwise be in Hong Kong. We can expect that trend to accelerate now.

But with China’s government closing its grip on Hong Kong, all data passing through that cable could be intercepted by the People’s Republic of China. There would be no way to ensure the security of the transmissions from the U.S. to Hong Kong.

It’s likely the cable will never be completed. I suspect it will simply run from the U.S. to Taiwan and the Philippines instead.

It is really sad to see basic freedoms being stripped away in 2020 like this. The same can be said about the U.S. as well. One would hope that the opposite would be happening… that the world would be enjoying newfound freedoms and peace.

There is a silver lining, however.

This is just one more reason for foreign and U.S. companies to move their supply chains out of mainland China and back onshore. That’s the decentralized manufacturing renaissance we have been talking about recently.

We’re in the early stages of a manufacturing renaissance that will result in millions of new jobs and the next generation of manufacturing technology.