Private investments are no longer the realm of only the uberwealthy, the hedge funds, and the venture capitalists of the world.

Now, even unaccredited investors have the chance to participate in what used to be a completely inaccessible asset class. And I mention this for a very important reason…

Right now, there’s a lot of uncertainty in the stock and crypto markets. And that has led to heavy volatility… with few places to hide. Most of us have lost money this year during this pullback… and as such, we need to think outside of our usual strategies.

That’s where private investing comes in. Unlike the shaky public markets, private companies are largely unaffected by earnings reports, Fed meetings, and market sentiment. Even during this year’s bear market, private companies have continued to grow… and to increase their valuations.

That means they’re one of the few places where we can continue to grow our wealth no matter what the market is doing.

And that’s why, this Wednesday, I’m hosting my Private Deal Room event at 8 p.m. ET. I’ll give investors the rundown of how private investing works… and that night, I’ll even share the name of the next promising private company, about to hold a raise, that’s come across my desk.

I’m excited to bring this to my readers, and so I’d like to invite everyone to attend. Simply go right here to RSVP.

One of the most important aerospace and defense shows in the world takes place about this time every year in Farnborough, England – just outside of London. It’s called the Farnborough International Airshow.

I always look forward to this event because it is typically packed with exciting new product announcements… And this year was no different.

In fact, Boom Supersonic just announced its new and improved hypersonic aircraft at the event this year. It’s called the Overture. 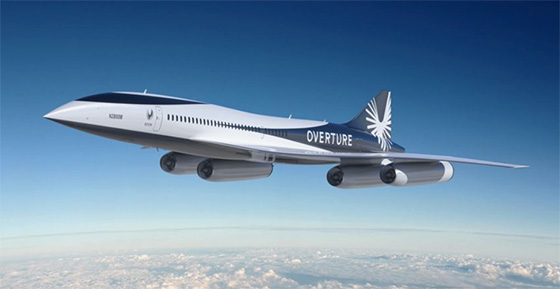 As a reminder, Boom Supersonic is one of my favorite companies in the race to bring hypersonic travel back. It fits into a broad investment category that I like to refer to as the future of transportation. And as we can see, this aircraft looks quite a bit different than anything we have seen before.

That’s because Boom Supersonic poured more than 26 million hours of computational design and optimization into it. The result is that the new Overture is more aerodynamic than previous designs. There’s less drag as the air flows over the fuselage.

In addition, they have made the switch from three engines – two on the wings and one on the tail – to four smaller engines mounted under the wings. This still enables speeds up to Mach 1.7, which is about 1,300 miles per hour. Traveling at that speed roughly cuts travel time in half compared to normal commercial flights.

And here’s the key – employing four smaller engines eliminates the need for afterburners, which are quite noisy.

So the Overture will sound a lot like the commercial jets we are accustomed to today. And it will be able to accommodate anywhere between 65 and 80 passengers over a range of 4,250 miles.

This is probably the biggest aerospace announcement of the year thus far. And what I’m most excited about is the fact that Boom Supersonic is in a position to start production in 2024 – That’s just two years away.

Simply put, these planes will be a revolution for air travel.

Just imagine flying from New York to London in just under 3.5 hours… The Overture is a gamechanger, especially for business travel.

One of my favorite nuclear fusion companies just hit a major milestone. TAE Technologies just raised an impressive $250 million in its Series G funding round.

And look at who was behind this round: oil giant Chevron’s venture capital (VC) arm, Google, and Sumitomo – a large Japanese conglomerate.

Clearly, things are heating up in the nuclear fusion space. Taking in a major round like this from well-established firms is a strong indication that TAE’s technology is nearing the point of commercialization.

For the sake of new readers, nuclear fusion is essentially the power of the Sun. It involves taking two separate nuclei and combining them to form a new nucleus. This produces an enormous amount of energy.

And to that end, TAE Technologies announced that the funds from this latest round will help develop its sixth-generation reactor design.

What makes TAE’s reactor stand out is that its fuel is different from the rest of the industry. The reactor generates electricity by fusing a hydrogen proton with boron. The benefit here is twofold.

First, these are two of the most abundant resources on the planet. There won’t be any fuel shortage concerns for any of TAE’s fusion reactors.

This will be 100% safe, clean, and limitless energy.

In comparison, most of the industry is working with deuterium and tritium. Those do produce a very small amount of radioactive waste. It’s much less waste than what’s produced by traditional nuclear fission reactors, but it is still a byproduct that needs to be managed.

And the larger issue with reactors fueled by deuterium and tritium is that there will be a shortage of tritium supply to fuel fusion reactors… It’s a well-known issue in the industry that doesn’t yet have a solution. There’s just not enough available to power a large number of nuclear fusion reactors.

So TAE Technologies is absolutely a company we want to keep a close eye on here.

And it’s worth noting that the company has now raised $660 million across three VC rounds since the start of last year. This tells us that TAE must be getting close to having a prototype that’s capable of net energy production – the ability to output more energy than what is required to run the fusion reactor.

As I’ve said before, nuclear fusion is a lot closer than most people realize. This technology is the future of clean, sustainable, baseload energy production.

The confluence of augmented reality, NFTs, and fashion…

We’ll wrap up today with a cool development at the intersection of augmented reality (AR) and non-fungible token (NFT) technologies… And fashion. 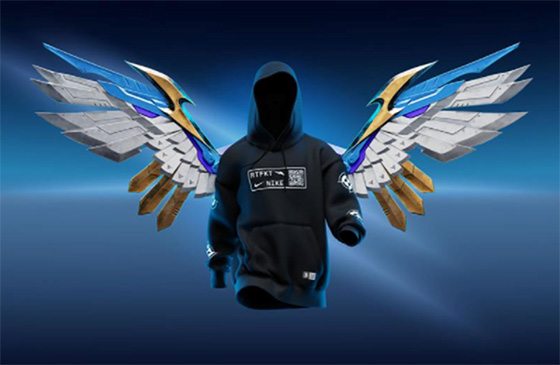 This is another “digi-fizzy” offering. There’s a digital version of this hoodie that we can use as apparel for an avatar in a metaverse. That’s where NFT technology comes into play.

And whoever buys the NFT will also receive a physical hoodie.

But it’s not just any hoodie. It is equipped with a near-field communication (NFC) chip that can interact with wireless devices.

We might think – what’s the point of that? Why does the hoodie need to interact with other devices?

Well, Nike and RTFKT are envisioning a world in which consumers use augmented reality. In that world, whoever is wearing this hoodie could be seen – through an augmented reality lens – as having wings, as shown in the above picture.

Imagine looking at someone through your phone’s camera, or better yet, through augmented reality eyewear, and being able to see the real world – plus the augmentation of people and objects.

This is wild in the sense that we could augment pretty much anything with wireless chips to enable this kind of creative design.

And this sets us up for what’s going to become a very interesting crossover between AR, NFTs, and the Web 3.0 industry… and the fashion industry as well.

It might sound crazy at the moment, but the lines are going to get blurred very quickly – as soon as AR glasses go mainstream… And our world will then get a lot more colorful and interactive.

In fact, that will happen very soon, as we’ll discuss tomorrow…