I am confident that the worst of COVID-19 is behind us. But we have not yet seen the worst of the impact on the global economy…

The first quarter (Q1) GDP numbers came out this morning, and they weren’t pretty.

The U.S. gross domestic product (GDP) dropped by 4.8% in Q1 on an annualized basis. That’s the worst that the U.S. has seen since the financial crisis in 2008. And yet, that’s nothing compared to what is coming… 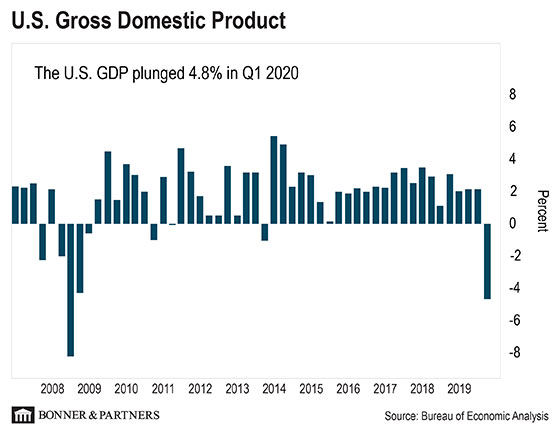 The economic contraction didn’t really begin in earnest until the last two weeks of March. Up until then, the U.S. economy was stronger than ever. And if just two weeks of economic lockdown brings a 4.8% drop for Q1, we can imagine the impact in the second quarter (Q2).

Mohamed El-Erian, the chief economic advisor for Allianz, made a quick estimation on Q2 after seeing the results. He believes that the economic contraction in the U.S. could be as large as 40% in Q2.

I doubt it will be that bad, but I do believe that it will be the largest single-quarter economic contraction in the last century.

And what did the market do on the news? It rallied. Incredible… but for very different reasons.

Early data from Phase 3 clinical trials for Gilead’s remdesivir, which I’ve spoken about a few times on Glenn Beck’s radio and television programs, delivered positive results as a therapeutic approach to treating COVID-19.

To be very clear, remdesivir is not a cure. It is not a vaccine. The results demonstrated that remdesivir is generally safe to use and shows some level of efficacy.

But the most critical part of the data was the demonstration that the 5-day regimen of remdesivir showed similar clinical effectiveness as the 10-day regimen.

Why is this so relevant? It means that in half the time and with roughly half the amount of drugs, we can get the same results. This means that more people can be treated with remdesivir as manufacturing of the drug scales up.

It is a sign of hope. That’s why the markets are up.

But I’d like to provide a word of caution. We are nowhere near being out of the woods yet.

We have a massive Q2 economic contraction to look forward to. It will be far worse than any of us have seen in our lifetimes. While a small number of companies are thriving through this crisis, like Amazon, most are getting crushed. We haven’t yet seen this reality in the stock market.

There are some bargains out there, but they are still few and far between. Ironically, many of the best bargains right now are in the biotechnology sector. Biotech is the sector least impacted by the current crisis, and it has the most to offer.

(As an aside, I’d mention that there is one early stage biotech company that I’m recommending to my readers. It’s a little-known biotech that I believe could address another public health crisis that few are talking about. At these levels, 1,000% gains are on the table. All the details here.)

What I’m seeing right now is private equity circling and fighting over distressed assets. The venture capital market has screeched to a halt. Most of the smart money is waiting on the sidelines for the next pullback.

Let’s tread carefully for the next several weeks. We’re in for more volatility. The discomfort will be worth it, though. I believe that we’re in for a strong recovery in the second half of 2020.

Keep reading The Bleeding Edge for more updates. But for now, our insights…

Readers know I’m predicting a “new world order” in the years ahead. The lessons learned from COVID-19 will be a catalyst for the adoption of bleeding-edge technologies like 3D printing, cloud-based applications, robotics, artificial intelligence, biotechnology, and 5G wireless technology.

And because of COVID-19, another technology is on the rise: delivery robots.

Starship Technologies is an early stage company I don’t think many people have heard of. Two of Skype’s cofounders founded the company in 2014. Microsoft acquired Skype back in 2011 for an incredible $8.5 billion for its online messaging and voice calling technology.

Starship’s technology enables food delivery in key markets around the U.S. And thanks to COVID-19, Starship’s business is booming right now.

The key to Starship’s success amid the COVID-19 pandemic is its autonomous delivery robots. These are small units with six wheels, and they can deliver about 20 pounds of food each. This can be food from restaurants or the grocery store.

The great thing about these delivery bots is that they can be deployed anywhere. They are small enough to drive on sidewalks, and they can navigate in bad weather.

Most importantly today, these bots are “contactless.” They bring food right to the customer’s doorstep. Then the customer unlocks the robot through a smartphone app and takes the food out. No interactions with other people need to take place.

For that reason, Starship is growing exponentially right now. In fact, there’s so much demand, the company can’t keep up. That’s going to lead to big investments coming in to finance rapid growth.

Looking at the big picture, autonomous food delivery services like this are the future. And thanks to COVID-19, that future is coming fast.

Consumers will soon have many options when it comes to how they get their food. Starship Technologies is just one option.

Regular readers may remember Nuro’s self-driving delivery vehicle called the R2, which we talked about back in February. This is another great example of contactless autonomous delivery.

It’s not hard to imagine a world where delivery drivers are no longer necessary. Soon we will see autonomous delivery vehicles of all shapes and sizes buzzing around our neighborhoods and city blocks, delivering food and packages to consumers on demand.

The future of entertainment…

Food delivery isn’t the only industry being reimagined in the wake of the COVID-19 pandemic. Much of the entertainment industry finds itself scrambling as well.

All sporting events have been either canceled or put on hold until further notice… as have all music concerts, movie festivals, and theatrical performances.

And according to one survey from Seton Hall, nearly three out of four Americans say they would not attend a live sporting event until a COVID-19 vaccine is found.

Mass gatherings aren’t going to happen again for quite some time. It’s devastating for the people and companies whose livelihoods depend on these events.

In fact, every technology conference that I was signed up for has been canceled this year. Every single one. And I attend 40–50 of them on average every year.

We’ve talked about Fortnite before. It’s a multiplayer game that is structured primarily in a battle royale format, in which players fight to be the last man standing.

There is a sense of urgency and intensity to the game since the playing field shrinks as the game progresses. Readers who have seen the movie The Hunger Games will have an idea of what it is like.

What makes games like Fortnite “sticky” is that young people play them to hang out with friends. They put on headphones with a microphone, and they talk to each other while exploring the virtual world together.

Imagine a social media platform like Facebook in the context of a gaming environment… That’s what Fortnite is like. Friends get to hang out and chat while having fun.

And players had the chance to watch a live concert together from inside this virtual world. And it was quite the performance… 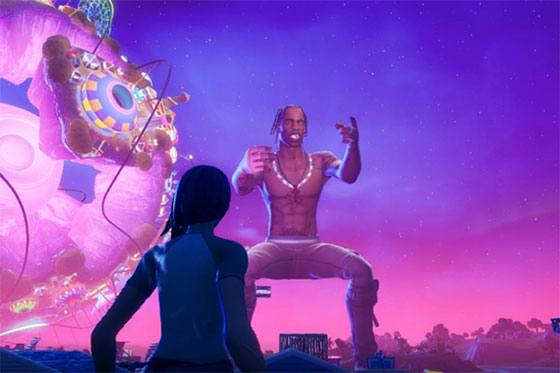 Not only did Travis Scott have a digital representation of himself jumping around and performing, but the concert also featured creative special effects.

Lightning storms happened in the background, backup dancers appeared to be made of fire, and the show even inverted gravity at one point. Players suddenly flipped upside down and started floating.

Now, I know this may seem like a strange topic to discuss in an investment letter. But get this – 27.7 million players showed up to watch this concert. That makes this the largest concert in human history by a wide margin.

If we compare this to traditional venues, most outdoor stadiums hold less than 100,000 people. Indoor arenas hold even less.

Then, if we compare this to top televised sporting events – the Stanley Cup got 5.4 million viewers last year. And the World Series got an average of 13.9 million viewers. Travis Scott’s virtual concert beat both combined.

Epic Games, the creator of Fortnite, is out of Cary, North Carolina, and it is a hardcore technology company. The gaming engine is all tech, and Fortnite is one of the most successful social media platforms ever built. The company is still private right now and worth at least $15 billion.

The writing is on the wall… This is the future of entertainment. And it won’t just be concerts. Soon we’ll be able to experience our favorite sporting events in virtual reality.

Imagine having front-row seats with three friends for the Super Bowl… right from the comfort of home.

Or imagine being in the passenger seat of a race car in the Daytona 500. You could look left and see the driver in action. Then you could look right and see other cars trying to pass you.

Talk about an immersive experience. And thanks to COVID-19, it’s coming faster than we realize.

5G is buoying the smartphone industry…

New estimates for 2020 global smartphone shipments just came out. Smartphone sales are expected to fall about 15% this year due to the COVID-19 pandemic.

That’s a big dip, but it’s not quite as bad as it could have been. And that’s a testament to the rollout of 5G-enabled smartphones this year.

That means nearly 38% of all smartphone users still plan to upgrade their phone this year, despite what’s happening with COVID-19. We can expect a large percentage of those upgrades to be for 5G-enabled phones.

That’s why all major manufacturers are going to push their 5G phones hard this year, culminating with Apple’s big 5G iPhone launch in September. Other phone models are being deprioritized in favor of 5G models.

And the first 5G smartphones to come out will be the mid- to high-end models, which have the highest margins. That means we are entering the magic window when manufacturers can make big money on their smartphones.

So we’re going to see a land grab for 5G market share in the industry this year, and, of course, the heaviest buying will be in the third and fourth quarters.

As regular readers know, I have been using Samsung’s 5G-enabled phone to test out 5G speeds across the country, most recently in Washington, D.C. And I can confirm that 5G speeds do not disappoint.

But I can’t wait for the 5G-enabled iPhone. I will be first in line when Apple releases its new iPhones.

Apple did announce that it will delay production for its 5G iPhone thanks to disruptions from COVID-19. But the rumor is that mass production will only be pushed back by a month.

So we can still expect the launch to happen in September… We’ll just have to wait until October to get our hands on the new iPhone.

P.S. Apple is a great company, but I don’t recommend buying Apple stock for 5G exposure. Here’s what I do recommend to readers looking for exposure to the 5G trend…

I’ve identified a little-known technology company that supplies an essential component to billions of 5G-enabled smartphones, including Apple’s 5G iPhone. This device is a lynchpin for 5G devices.

And this company has a virtual monopoly on the supply. That’s why this is my No. 1 5G investment of 2020. All the details right here.