But before we get to our questions, let’s talk about the recent market action…

What a day we had in the stock markets yesterday. A harrowing drop. Concerns over a spike in COVID-19 hospitalizations in the U.S. spooked the markets. I read a few of the headlines and dug in.

First, let’s have a look at the number of daily COVID-19 tests that are being run in a few different countries around the world. 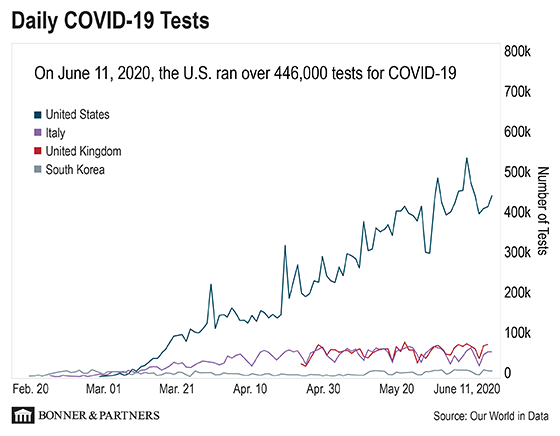 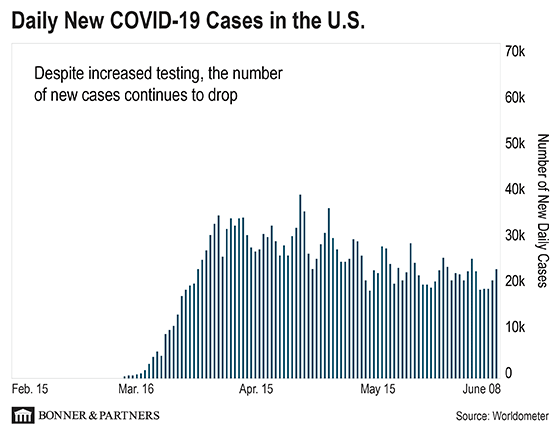 And despite 3.2 times more tests, the daily new cases number continues to drop. But it got me wondering. How many of those tests are positive these days? We might be surprised.

Another headline that caught my eye is how hospitalizations are spiking. And they are certainly increasing, but for another reason…

Elective surgeries are now being permitted in most places in the U.S. After all, for about three months, if our surgeries were considered elective rather than immediately necessary, we were told we would have to wait.

Everyone who had a delay in surgery is getting back into the hospital to have their procedures. That is great news.

If you are one of them, I wish you a speedy recovery.

I’ll keep an eye on this trend and report back. But now let’s turn to the mailbag.

Apple’s communication satellites are not a threat to 5G…

Hi, Jeff. I heard a rumor that at the June 22 Worldwide Developers conference, Apple is going to announce that it is putting up 3,000 satellites into orbit with the intent of having Apple Wi-Fi available.

Thus, there will be no need for all this mumbo-jumbo with internet services and components and cables and towers, etc. Is this true? Please address this immediately because I need help to know what companies to pull stock out of and what companies to go into.

Hi, Marie. Thanks for the fun question.

I know exactly what you’re referring to. In late 2019, news broke that Apple was working on a project to launch a series of satellites. The satellites could be used to “beam” data directly to Apple devices without having them rely on wireless network operators like Verizon or AT&T.

Since that announcement, others have speculated that this could herald the imminent destruction of today’s wired and wireless networks, including 5G.

Even if Apple employs this technology, our smartphones will still use the 4G and 5G wireless networks for connectivity. We can think of a satellite configuration as an overlay network.

And Apple would have to put additional semiconductors and antenna technology into its phones to receive the signals from satellites.

Why would Apple do this? How would it use this satellite network?

It could certainly push out data, information, video, and so on directly to its smartphone users. Theoretically, this could be done anywhere in the world with the right satellite network.

The technology could also be used to improve Apple’s own mapping technology and services.

Apple has hired an impressive group of executives with strong backgrounds in the satellite communications industry. The company is clearly serious about the project, but that doesn’t mean that it will become a commercial launch.

It is possible we’ll see something roll out within the next five years, but I seriously doubt that anything will happen this year or next.

An interesting question for me, though, is whether Apple will launch its own network of satellites or leverage another network.

If Apple’s aspirations were geographically limited, like in just the U.S. and Western Europe, a couple of geostationary satellites might do the trick.

But if Apple wants to cover the majority of Earth’s population, it will need a larger network of satellites. That might mean a partnership with a company like SpaceX.

I wrote about SpaceX’s Starlink project in November of last year.

Ultimately, Starlink wants to launch 42,000 satellites into space to provide internet connectivity to remote areas. Apple could simply strike a deal with SpaceX and use its Starlink network to accomplish its goals.

And as a reminder, Starlink is also not a threat to 5G.

When we use a satellite internet service, latency can be a half a second or more. It might not sound like much, but the delays can be significant.

And consumers will never get 100 megabits per second to the home over a satellite service. Streaming video to a television, for example, would be quite difficult.

Compare that to 5G wireless technology. 5G will have latency of only 1 millisecond. A millisecond is a thousandth of one second. And 5G speeds will average 1 gigabit per second (Gbps). I have personally experienced 1.7 Gbps in Washington, D.C. Peak speeds can reach 10 Gbps.

On top of that, 5G connectivity will be cheaper than paying for satellite internet. Which do we think consumers will opt for?

So even if Apple does get this project off the ground in the next five years, it still wouldn’t be a threat to 5G. Some of the absolute best investment returns are being found in 5G-related companies right now. And that will be the case for years to come.

And if readers haven’t gotten exposure to the 5G trend, I recommend they do so soon. Every day, we get closer to the mass adoption of 5G technology. Once that happens, the largest gains will be gone.

To see which 5G stocks I’m recommending to my readers, go right here.

I have seen Jeff’s demo of the 5G network outside, but my investigation tells me that 5G becomes 4G or even lower inside of restaurants, buildings, theaters, airports, etc.

In other words, it cannot and will not work if the signal is blocked… Therefore, it only currently works OUTSIDE in DIRECT VIEW of a tower or 5G site.

This seems to be in contradiction to his recommendations of hot 5G stocks? Can someone address this ASAP?

This is a common question. And it usually comes when we read reports from mainstream media about this “fatal flaw” with 5G.

But this is a topic that journalists almost always get wrong. They don’t have the industry knowledge to understand the nuances of the technology. And I say that as somebody who worked as an executive in the wireless industry for years.

First and foremost, your concern is simply not true.

Therefore, any wireless network has to be designed to consider these signal levels.

5G wireless technology operates at higher frequencies. Its signals don’t travel as far as those at 4G or 3G radio frequencies. They also operate at higher power.

The upside to this is that we can experience extremely low latency and extremely high speeds over 5G networks.

The downside is that we require a lot more 5G base stations compared to 4G in order to provide the same level of network coverage.

Because we are in the early stages of the 5G wireless network build-out, the network is not complete. Indoor network coverage will come as the 5G network base stations are installed in more locations. It is just an issue of time and network architecture, not a weakness of the technology itself.

And we don’t have to worry about this issue when we purchase 5G-enabled phones. 5G phones will also run on 4G networks. So when the 5G phone is outside of the range of a 5G network, it will automatically switch frequencies to fall back to 4G network connectivity.

Thanks for your question.

I received a letter in the mail…

Our final question comes courtesy of a reader who took the time to write me a letter and mail it to our offices in Florida. It’s rare for somebody to take the time to send in an actual letter these days. So I wanted to answer his question as best I could.

Thanks for the information. I have a problem as an old man at 88 years of age. I have no know-how with the stock market. I was a dairy farmer for almost 40 years and then moved to MO to help my son-in-law with beef cattle. The only reason I turned to your organization is that I know nothing about the stock market or how it works…

I wouldn’t bring it up except I heard about the law of usurpation, or taking money out of the bank and our IRAs without so much as a thank you. I remember reading about Corsica, I believe, when the government went in and froze (stole) the citizens’ savings. How then do you buy provisions for your family, insurance on your possessions, or any bills like gas, electricity, or the doctor?

I am interested in preserving as much of our savings as possible. The bank has little or no interest-bearing accounts. Our IRA is just sitting there so far until we can find out what we can invest in. All our children are grown and almost all of our grandchildren and great-grandchildren, too. So it is now only some charitable organizations we contribute to and church. If you can explain what has to be done about our IRAs, I’ll be glad to talk or hear from you.

Kemble, thanks for your interest in my research. And thanks for the letter.

As a researcher, I can’t give personalized investment advice. What you decide to do with your savings and retirement accounts is entirely your decision.

But you bring up an important topic. This is an issue that many people these days are dealing with.

You’re correct. It’s impossible to find a decent yield from traditional savings accounts these days. The average interest rate from a savings account is just 0.09%.

As a result, more people are turning to stocks to help grow their wealth. But for newcomers, that can be a daunting task. That’s where I help with the research I publish.

I tell my readers which stocks have the highest potential return with limited downside risk. I share my analysis on the best prices to buy at, upside targets, and risk management. Investors can then use this research to inform their investment decisions.

And I think you can guess which sector I believe has the highest return potential: technology.

My readers have profited from technology trends like the 5G wireless rollout… CRISPR genetic editing… and artificial intelligence.

My mission is to “balance the scales” in favor of the retail investor. I want investors who follow my work to have an edge over Wall Street, not the other way around.

Again, it’s up to you what you do with your savings, Kemble. But you might find my Near Future Report advisory useful. There, I profile “sleep well at night” technology stocks. These are established companies that are still in growth mode. You can learn more about that here.

That’s all the questions we have time for this week.

As always, if you have a question you’d like me to answer in an upcoming mailbag, just write to me here. I’ll do my best to answer it.