While so much attention has been directed at countries like China, the U.S., South Korea, Italy, the U.K., and Sweden with regard to COVID-19, little has been given to the amazing success of my adopted country, Japan. I spent almost my entire adult life there while working throughout the Asia-Pacific region.

There were no restrictions placed on Japan’s citizen’s movements, though the government requested they avoid crowded, enclosed, and close-contact spaces. Many businesses stayed open.

No contact tracing applications were deployed, which is even more striking in a market that is so technologically advanced. Even testing for COVID-19 was very limited… only 0.2% of Japan’s population.

The most significant adjustment was closing down the schools a few weeks in advance of its April break. That’s about it.

And Tokyo is one of the densest cities on the planet. Over 38 million people live in the Greater Tokyo Area, with subways and trains often packed shoulder-to-shoulder during rush hour twice a day. Tokyo seems like the perfect environment for a virus to spread widely.

What happened? Almost nothing.

Basically, Japan managed it beautifully. And it did it without violating its citizens’ freedoms like so many other countries have done… including the U.S. Ironic, isn’t it?

What was the secret? It is deeply cultural.

Whenever my European or North American colleagues would visit me in Japan for business, they were always surprised by how many people would wear masks. They assumed that those people were neurotic, worried about becoming ill from others in such crowded and busy spaces.

But the truth is the opposite. When we wear masks in Japan, it is because we feel ill. We cover our nose and mouth so that we will not spread our cold or flu to those around us. It is out of concern for others’ well-being that we wear masks.

When they feel ill, most Japanese people simply stay home and rest. Americans tend to ignore it and power through a cold, whereas the Japanese tend to take a day or two off and recover. In effect, they self-quarantine.

Unless our masks and protective eyewear provide a perfect seal on our face, a mask won’t prevent us from getting COVID-19. But it will help stop us from spreading COVID-19 if we are infected. The mask catches most of the particles if we cough or speak, and that avoids the spread of the virus. It is remarkably effective.

The Japanese diet is also different from the West’s.

In general, they eat lots of vegetables and small (by Western standards) portions of proteins, especially fish. Their meals also contain reasonable amounts of carbohydrates (e.g., rice) and various kinds of Japanese tea. All this helps people maintain good health.

Combine that diet with a lot of walking every day during the daily commute and other outings, and we end up with a healthier population. Only 3.6% of Japanese are considered obese. Compare that with 32% of Americans.

And not surprisingly, Japan also has comparatively low levels of hypertension and diabetes. These factors may put a patient in a high-risk category for not just COVID-19 but any kind of respiratory illness.

These reasons, coupled with the fact that Japan is arguably one of the cleanest nations on Earth, are why the country has managed the pandemic so well. Countertops, tables, desks, hands… just about everything that we come in contact with… is regularly cleaned. It’s striking what a difference it makes.

Such simple adjustments and lifestyle choices didn’t require shutting down an economy and trillions of dollars of money printing. And the best part? No violations of personal privacy or individual freedoms.

How did the Japanese do it so easily? Because they have a lot of practice. And I hope that the world can learn from examples like Japan and Sweden when it has to deal with the next virus that comes our way.

It was only a few months ago that the world first learned about “contact tracing.” That’s the technology that enables smartphones to automatically communicate location information. The idea is that it would alert people when they came in close contact with somebody infected with COVID-19.

Well, early data is now coming back from Care19. And guess what?

Care19 has been sending location and personal data on all users back to Foursquare, a company notorious for selling data to advertising companies… specifically location-based data.

That’s right – an app rolled out for “public health” reasons is collecting personal data and sharing it… After its privacy policy promised it wouldn’t do this. Unbelievable.

Of course, ProudCrowd said it does this in a way that obscures the data so it can’t be linked back to individuals. But this is the same nonsense that Google and Facebook have built their entire multibillion-dollar empires on.

So this first run at contact tracing makes it quite clear – we can’t trust these companies to secure our data. That makes this an invasive technology… a clear and present danger to our personal privacy and our freedoms.

And get this – these apps aren’t even good at contact tracing.

That’s because they use Bluetooth technology. And Bluetooth just is not accurate when it comes to measuring distance. We could be almost 30 feet away from someone, and Bluetooth could perceive us to be within three feet of each other. And, of course, the opposite is true as well.

So these contact tracing systems will produce erroneous data, which will make them an even bigger disruption in our lives.

After all, what if our app tells us that we’ve been within three feet of somebody with COVID-19, but we were really 30 feet away? What if it advises us to self-quarantine for no good reason? Or for that matter, what if local authorities “force” us to quarantine against our will because of such erroneous data?

To me, it’s clear that contact tracing through Bluetooth will be nothing but invasive and inconvenient. It won’t even be able to do what it’s supposed to do accurately.

We don’t have to like the idea of contact tracing. (I don’t.) But as investors, it does present an interesting opportunity…

I downloaded the latest software update on my iPhone just a couple of days ago… and it supports contact tracing. That means this is already baked into the cake. We are subjected to contact tracing even if we never download an app.

This is coming whether we like it or not. And as I showed above, Bluetooth is the wrong technology for the job. But there is a technology that could allow contact tracing to accomplish its stated goal.

The location accuracy in this new technology is precise down to the millimeter. That’s a much better way to determine if we’ve come into close contact with an infected person. And I’ve identified the one company that will be the industry leader in this area.

I’m publishing details on this company to readers of my Near Future Report advisory this evening.

To be clear, this month’s recommendation is more than just a “contact tracing” company. It is powering three major communications network upgrades including 5G and the transition to Wi-Fi 6.

My readers should be sure to look for that within the hour. And for new readers, you can learn about this stock recommendation by joining me as a reader of The Near Future Report. Go right here.

A breakthrough in bionic body parts…

This is cool – scientists have just produced a bionic eye.

Right now, the design is just a proof-of-concept, but it’s the stuff of science fiction. 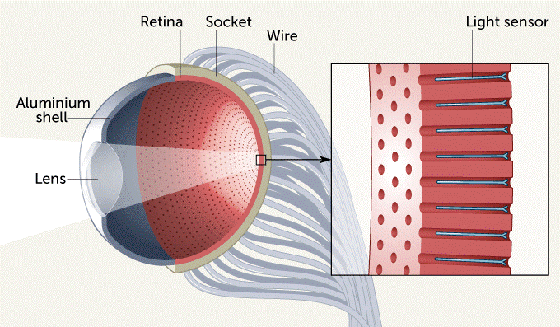 The eye utilizes tiny sensors made of a material called perovskite. This is a very light-sensitive material that’s on the bleeding edge of material science.

Perovskite is one of the most promising materials for use in future solar panels. In ideal conditions, perovskite can convert light into energy with 66% efficiency. For comparison, legacy photovoltaic cells are only about 25% efficient in ideal conditions… and in reality, it’s usually around 14–15%.

These perovskite sensors are connected to nanowires that replicate the brain’s visual cortex. They take the visual information captured by the sensors and send it to a computer for processing.

Because of this, the bionic eye could potentially generate better resolution, depth, and light sensitivity.

And it will also be able to see in the near-infrared spectrum… which means it can see in what would otherwise look like complete darkness. It will be like having built-in night vision goggles that automatically turn on in darkness and then switch back off when it gets light.

For those who remember the old television series The Six Million Dollar Man, this bionic breakthrough begins to turn that science fiction into reality. It’s incredible.

As far as applications go, the first will be robotics. This technology could be used in cars, on manufacturing lines, and in humanoid robots. And eventually, anyone who loses an eye will be able to receive a new one and have their vision be not only restored but enhanced.

This is such an interesting development. And I’d be curious to hear what readers think. Would you upgrade to a bionic eye if your natural eyes were injured? What if your eyes were just fine? Would you still be interested in the upgrade? Feel free to write in with your thoughts here.

AT&T just got scolded for its fake 5G network…

I’ve had this conversation more times than I can count…

I always ask, “Is AT&T your service provider?” The answer is always yes.

For readers who may not know the backstory, AT&T was the first to claim it had nationwide 5G coverage. Readers who have an AT&T phone will even see a “5GE” logo in the top right corner of the screen. 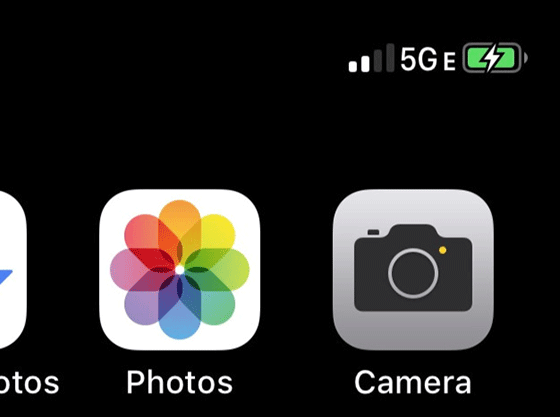 But 5GE has absolutely nothing to do with 5G. And AT&T is now getting publicly scolded for this practice.

The National Advertising Review Board (NARB) just called out AT&T for its deceptive marketing practices. AT&T has been touting its 5G Evolution (5GE) network as an actual 5G network. The NARB is a self-policing industry organization that seeks to promote ethical industry practices.

And 5GE is just 4G technology. When AT&T launched its 5GE marketing campaign, it was simply upgrading its 4G network to catch up with Verizon’s 4G network performance. The company had not yet completed its 4G build-out. So it called this 4G upgrade “5GE.”

That’s why the NARB just told AT&T to knock it off.

In response, AT&T agreed to stop its 5GE marketing. Curiously, the company refused to remove the 5GE logo displayed on its 4G phones.

Ironically, AT&T did this same thing during the transition from 3G to 4G a decade ago. I remember AT&T aggressively marketing its 3G phones and 4G as early as 2009–2010.

Sadly, many AT&T customers will fall for this gimmick. It is a great disservice to the whole industry as well as wireless consumers. But readers of The Bleeding Edge now know better. And hopefully AT&T will abide by the NARB’s standards and get back to building out real 5G networks.