No, I’m not talking about a manned mission to the Moon or Mars. SpaceX just became a “centicorn.” That’s a private company worth more than $100 billion. We normally read about “unicorns” – private companies with $1 billion valuations. This is 100X that.

The latest valuation was determined through a secondary offering of up to $755 million in stock. SpaceX agreed with existing investors and insiders to the sale at $560 a share, resulting in the $100 billion valuation.

Secondary offerings like this are becoming far more common these days. With private companies staying private for such extended periods of time, many early investors and even employees want to have some liquidity by selling their shares. They just don’t want to wait until the time of the initial public offering (IPO) to cash out.

In the case of SpaceX, its Series A raise happened back in 2002. It’s hard to believe that the company has been private now for almost two decades with no indications of an IPO. It’s also understandable why some want to take part or all of their investment off the table.

Consider this – I saw an estimate that SpaceX revenues for this year will come in around $1.6 billion. At a $100 billion valuation, SpaceX is valued at more than 62 times annual sales. Yes, SpaceX is a revolutionary company that is still in high growth mode, but 62 times sales?!?

For comparison, let’s look at a company like Lockheed Martin. It is valued at about the same: $108 billion. That said, it will generate $68 billion in sales this year and $7.2 billion in free cash flow. That’s an enterprise value-to-sales ratio of 1.63 compared to SpaceX at 62.

Those who are selling shares at this valuation are smart. If they can find buyers at a $100 billion valuation, it is hard to go wrong. It will take years for SpaceX to grow into a valuation like this.

And selling now can even be smart in the event that SpaceX had its IPO. Coinbase is a perfect example. There was a secondary offering of shares months before its own IPO at just over $100 billion. It direct listed this April and is now trading around a $53 billion valuation. Those who sold in the secondary are looking pretty smart.

Sadly, investing in secondary offerings is off-limits to nonaccredited investors. Many of the later stage private companies are no riskier than publicly traded companies, yet the SEC determines that normal investors cannot access this asset class.

For those who can, I can offer some advice. It’s really critical to understand the valuation of the company, its gross margins, and preferably its free cash flow. I would never recommend anyone invest in SpaceX at 62X annual sales.

SpaceX is certainly best in class in terms of being an aerospace company, but it won’t have the same kind of gross margins as a cloud-based software company… There is simply too much heavy hardware involved. And 62X would even be too rich for a software company.

When investing in private companies, it is critical to get in much earlier… when the valuations are at reasonable levels. There is more risk involved, but it’s worth it given the returns.

The most important thing to do is to build a portfolio of high-potential private companies. A balanced approach where one never goes “all in” on a single investment is the best way to ensure that the portfolio has exposure to the real outliers that drive overall portfolio returns and ultimately generational wealth.

The days of Amazon going public at a sub-$500 million valuation are over. The venture capitalists simply won’t let that happen anymore. That it is why it has become so important for investors to have a portion of their portfolios invested in early stage private companies. That is where the potential for 100X-plus returns come from.

I’m gearing up to launch a private investing research product that will be available to all investors. The rules of the game are changing, and thanks to some significant regulatory changes, crowdfunding opportunities are becoming an exciting path for entrepreneurs to raise capital… and for investors to support those companies in their mission.

In the process, we can make life changing returns.

Twitter is showcasing blockchain technology through its latest feature additions… and becoming one of the largest global payment networks in the world as a result.

The social media app now lets users accept tips in bitcoin if they have a mobile iOS device, with plans to add functionality to Android devices soon. This seemingly simple feature gives Twitter’s 396 million users the ability to send bitcoin to anybody in the world.

This is significant. For comparison, the successful fintech payment network PayPal has about 392 million users.

And this is just what Facebook tried to do through its Libra project. It would have been a payment network for the 2.89 billion Facebook users around the world.

And while all of Twitter’s users won’t enable this feature right away, there is clearly potential for mass adoption.

Here’s what the icon looks like when enabled on the profile of one of our own Brownstone analysts, Nick Rokke. 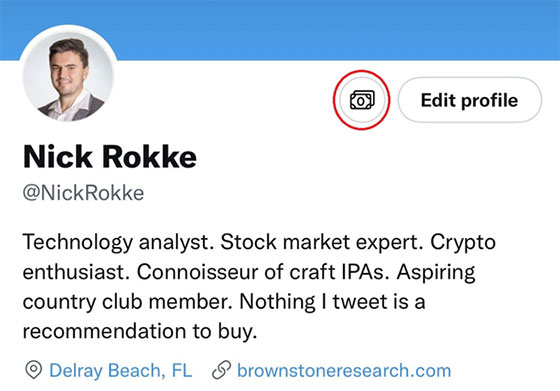 The tip system works through bitcoin’s Lightning Network. It is a solution built on top of bitcoin that lets users send the cryptocurrency nearly instantly with extremely low fees.

And the real potential for Twitter can be seen in its other recent changes. Influencers can now monetize themselves through ticketed events (via its Clubhouse-like audio chat room called Spaces) or the newsletter platform Revue, which Twitter acquired earlier this year.

At first glance, many might brush this news off as a headline grab. But in reality, it has incredible potential as Twitter adds payment functionality to its services.

We have been discussing how NFTs are becoming a very powerful trend. NFTs are digital collectibles that allow anybody to authenticate them using the blockchain. And we are seeing many people – including celebrities – add NFTs to their profile. Here are a few examples: 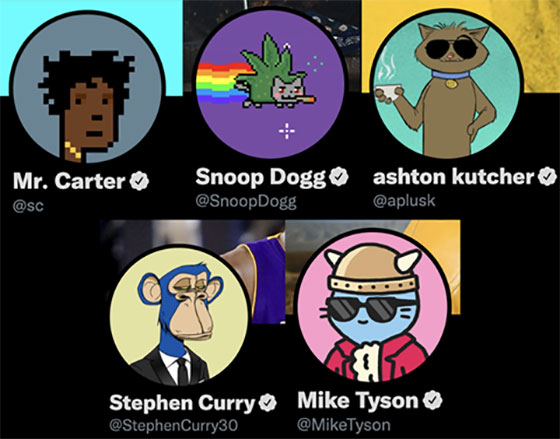 Twitter will soon let users authenticate these NFTs – similar to how the checkmark by a name demonstrates a user is who they say they are.

The ability to verify and demonstrate that the picture shown is the original NFT makes sense. It is a natural evolution of the NFT space. And it showcases how blockchain technology makes it easy to authenticate tokens.

These are two major announcements from Twitter built on blockchain technology. I expect other companies to follow its lead in the months to come.

And as Twitter integrates its new monetization features with its other tools, the company becomes one to watch for investors.

And if you are interested in learning more about investing in blockchain technology and the tokenization trend, I recently launched my research service exploring these spaces. Simply go here to check out Unchained Profits. There, we break down the best opportunities while providing the tools to help you get started.

A flying semiconductor you can barely see…

Here is a really cool semiconductor designed by the Northwestern University that is the smallest flying device made by humans.

It is roughly the size of a grain of sand. Here it is next to an ant to demonstrate the size.

Semiconductor Next to an Ant 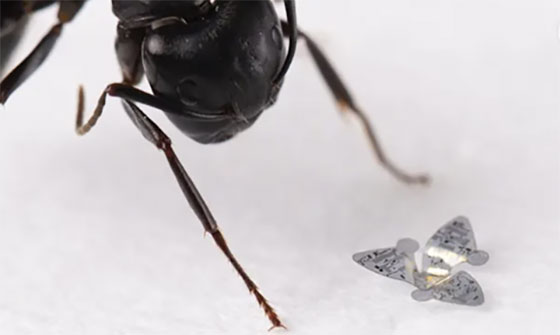 The semiconductor sits in the middle of the airfoil. It is a super-light piece of metal whose design is based on how seeds spread in nature. When propeller-like seeds from maple trees and some flowering plants drop, they can be carried in the wind for long distances.

This means the technology created by the scientists at Northwestern was essentially designed by nature.

The device itself has a tiny micro-controller in the center. Then sensors and batteries sit around it along with a Near Field Communications (NFC) coil for sending data.

You can see just how much is packed into one of these flying devices. 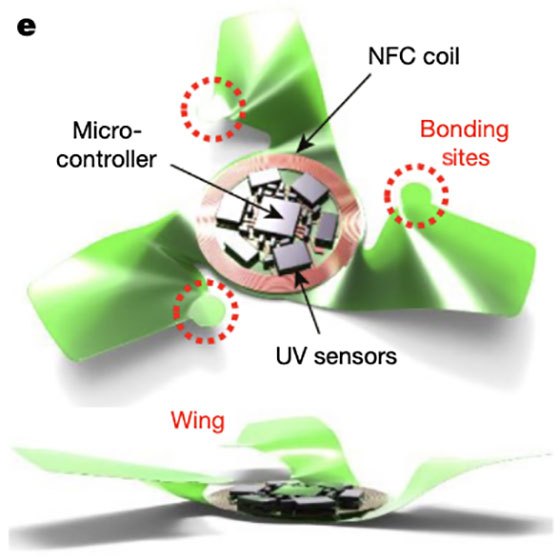 Where these devices get interesting is in their ability to send data from different environments.

These devices can be dropped in oceans to determine currents. They can be placed in water to determine water quality. Or they can float in the air to analyze weather patterns.

And since the scientists plan to make them biodegradable, these devices wouldn’t become litter.

These remind me a good bit of the small, golf ball-like devices in the movie Twister. Those devices needed to be placed in the path of an active tornado to get swept up into the air.

The good news is, these new devices are much simpler to distribute, which could help scientists better analyze and predict tornados, for example.

There are a lot of practical applications for scientists and enterprises alike, especially to take measurements of our climate and environment.

I’m excited to see how this technology is used and whether or not any companies license the technology for commercialization.

A solution to the labor shortage?

The last story of today is about a fully autonomous farming company called Iron Ox that raised $53 million via a seed round.

Its unique business is in developing robotic farms.

The company uses controlled hydroponic growing environments with robots to plant and care for the vegetables. When the plants are ready for harvest, the growing beds can be robotically delivered to a robotic arm for harvesting.

Here is a preview of what the process looks like. As you can see, no humans are involved.

Through artificial intelligence (AI) and robotics, the Iron Ox team can harvest everything without the need for large amounts of human labor.

Not only is this way of farming better for the environment by reducing water usage, but it is addressing one of the biggest issues of our economy – the labor shortage.

And with its recent financing round, the company looks to scale to meet industry demand for robotic labor. That’s why this was such a large funding round for an agricultural tech company.

This is the perfect example of an undesired consequence from economic lockdowns and the subsequent stimulus. Now companies are finding solutions to overcome this labor shortage problem, and there won’t be any turning back after the technology has been adopted.

While clearly this will result in the loss of many jobs in the agricultural sector, it is creating more opportunities for AI and robotics. This is jump-starting the industry, and I estimate we are now five years further ahead in development than where we would be otherwise.

The field of AI and robotics continues to attract large sums of capital, and I don’t see this trend slowing down anytime soon. This makes Iron Ox a company to watch, as it will grow quickly over the coming months.

And it probably won’t be long before we are eating produce that has been grown and harvested by “smart” robots.