Yesterday, I had the pleasure of attending a lecture at Columbia University given by Andrew Viterbi. He is a legend in the engineering community and one of the inventors of the code division multiple access (CDMA) technology used in cell phone networks.

The lecture was mostly on the history of wireless technology development. Viterbi retired during the 4G wireless era, so he isn’t as up to speed on 5G-related developments, but I did get to ask him one question…

While I have yet to see credible, peer-reviewed research concerning any negative health effects from wireless technology, I did ask him if there was any cause for concern with the higher power, small cell architecture of 5G networks. This is one of the most common questions we receive in our feedback… It’s a very popular topic of discussion among our readers.

After a chuckle, he replied, “The debate has been going on for 30 years… and we won’t know until about 100 years from now if we are all growing green horns.” It was a humorous way of saying that we haven’t seen any negative effects of wireless technology yet. And yes, he has been asked that question a lot.

I couldn’t agree more. Like it or not, 5G, genetic editing, artificial intelligence, machine learning, self-driving cars, robots, blockchain technology, augmented reality, and so forth are all out of the bottle. Their development can’t be stopped. In fact, it is accelerating. Our job is to do our best to ensure that it is used for the good of society and the improvement in quality of life… not for evil.

The world’s largest aircraft is also a launchpad for rockets…

Aviation history buffs will likely know about the Hughes H-4 Hercules, also known as the “Spruce Goose.” Designed by Howard Hughes, the Hercules had a wingspan of 320 feet. It was the largest aircraft to ever fly when it made its first – and only – flight in 1947.

Well, it may have taken more than 70 years, but an early stage company has outdone the legendary Spruce Goose…

Stratolaunch was founded in 2011 to build the largest aircraft the world has ever seen. The idea was to make the aircraft a launchpad for rockets. This was one of late Microsoft cofounder Paul Allen’s most audacious ventures.

This is a beautiful and ambitious project. And it’s part of the new space race we’ve been covering in these pages.

Stratolaunch produced a twin-fuselage plane with a massive 385-foot wingspan. As you can see from the photo below, it looks like two planes joined by a massive wing. 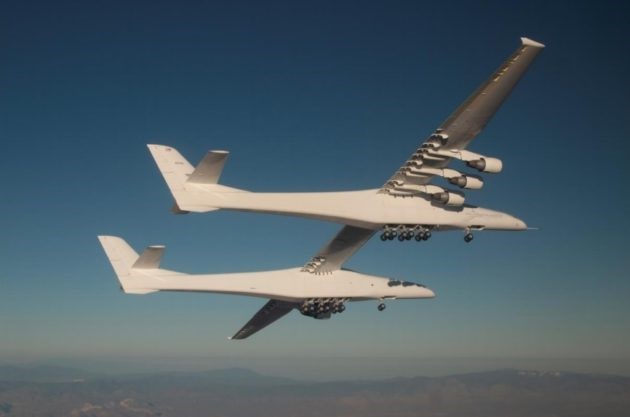 This aircraft completed its first test flight back in April. That’s where this picture comes from.

As impressive as the aircraft itself is, the real value is in the potential to launch payloads into space cheaply. The Stratolaunch “carries” its payloads (the rockets) to high altitudes. Then, it launches them into space.

This is certainly a novel approach to the problem of expensive rocket launches. It’s right up there with Mark Cuban-backed Relativity Space, which we wrote about last week.

And that’s why Stratolaunch just sold to an undisclosed buyer…

The terms of the deal haven’t been disclosed yet. But early speculation is that the buyer is either aerospace conglomerate Northrop Grumman or Richard Branson’s Virgin Galactic. That’s because both these companies have ties to the company that manufactured Stratolaunch’s aircraft.

Either way, I am excited to watch this venture grow and develop. Getting small payloads into Earth’s orbit will be a massive market in the coming years… And Stratolaunch could be a great player in the industry.

I suspect we’ll get more details on this deal in the coming weeks. As always, we’ll cover ongoing developments in these pages.

A game changer in quantum computing…

As regular readers know, we reached quantum supremacy last month. This is the point at which a quantum computer can outperform the most powerful classical supercomputer on Earth.

As a reminder, a report last month leaked details on the tests Google ran on its 53-qubit quantum computer. Google gave the quantum computer a task that would take the world’s most powerful supercomputer, Summit, 10,000 years to complete… And it finished in three minutes and 20 seconds.

That said, the consensus has been that we still have years to go before commercial quantum computers will be available. They are just too hard to produce… mainly because it’s hard to get material into a quantum state.

Well, it turns out the consensus could be wrong…

We don’t have to worry about the technical details as much, but here is the implication…

And for science fans, physicists predicted this material all the way back in the ’80s. They didn’t envision the name “β-Bi2Pd,” but they did imagine a quantum material that is naturally conducive for quantum computing. Here we are 30-odd years later, and the predicted discovery has been made.

We’ll follow the growth of quantum computing closely from here. The focus now will be on building larger quantum computers with more qubits. We are just at the beginning of this trend. Stay tuned for future updates… We are going to see some incredible developments in the next 12 months.

Why the new autonomous vehicle consortium is a joke…

Semiconductor intellectual property company Arm just created what it calls the Autonomous Vehicle Computing Consortium (AVCC). This was announced at a keynote speech in Silicon Valley.

The consortium includes General Motors, NVIDIA, Denso, Toyota, Bosch, Arm, Continental, and NXP Semiconductors. And the stated purpose is to focus on collaborative projects for self-driving technology. It wants to improve safety, security, computing power, and software for self-driving cars.

And here’s the kicker… The consortium claims that no one company can do all these things by itself.

Of course, that’s not true.

As we discussed on Monday, Waymo is days away from launching self-driving taxis in Phoenix. And Tesla has now logged 1.7 billion self-driven miles through its Autopilot system. Plus, lesser-known Aptiv developed the self-driving technology that Lyft is using in Las Vegas. In fact, Lyft has given more than 50,000 self-driving rides using Aptiv’s tech already.

So not only can single companies do it… they are doing it right now.

These types of consortiums are always a veiled effort to slow down or control technological development. They are created so companies who are behind can try to catch up.

And if we look at the list above… only NVIDIA has made any progress with self-driving technology. The rest of those companies missed the boat completely. They didn’t make the long-term investments in research and development over the last 10 years necessary to compete in the self-driving space. That’s why they are so far behind companies like Waymo, Tesla, and Aptiv.

So I highlight this story to expose industry shenanigans. The mainstream press will present this consortium in a positive light… But we know it’s a joke.

And to prove my point, all we need to do is look at what Arm’s senior vice president, Dipti Vachani, said in an interview with VentureBeat. When asked about whether self-driving cars were coming soon, here was Vachani’s response:

This comment is either completely dishonest or just plain ignorant. And it’s clearly a misrepresentation of what’s happening on the streets right now.

We shouldn’t let stuff like this fool us. Self-driving cars are already here. And we can expect to see more and more of them on the road as we head into 2020. I’ll share another exciting development on this topic tomorrow.