Tonight’s the night. At 8 p.m. ET, I am going to host my first-ever biotechnology master class.

As we have been discussing in these pages, this is a breakout year for the biotechnology industry, and that is paving the way for the 2020s to be the decade of biotech.

Fortunes will be made on the world’s best biotech companies in the years ahead. We’ll see regular investors make life-changing gains in this space. We’ll see new biotech-focused VC funds and hedge funds spring up like wildflowers to capitalize on this trend.

And we are going to be there every step of the way.

That’s why I have decided to put on this biotech master class. I’ll be coming to you from the biotech capital of the world. I’m going to show you what’s coming in the industry, and I’m going to reveal the details of my No. 1 biotech stock to own today. Based on my analysis, we could see gains of over 1,000% in the coming weeks thanks to an incredible breakthrough this company has coming.

I hope that this master class will give investors all the tools they need to navigate the coming “golden age” of biotechnology. I believe that we have a once-in-a-generation opportunity in front of us right now. It would be a shame to miss it.

Oh, and the class is 100% free. For investors who would like to join me, go right here to reserve your spot.

Is this a bubble…?

I’m getting asked this question a lot these days – “Are we in a bubble?” The big tech stocks have been on an absolute tear recently, and smaller tech companies like Zoom Video Communications are trading at ridiculous valuations.

Investors are wise to be concerned about valuations, but in general, my answer is “no.”

There are definitely categories of stocks to avoid due to their valuations. But there are still great places to invest in the markets. And an interesting area that I have been tracking closely is the market for initial public offerings (IPOs). 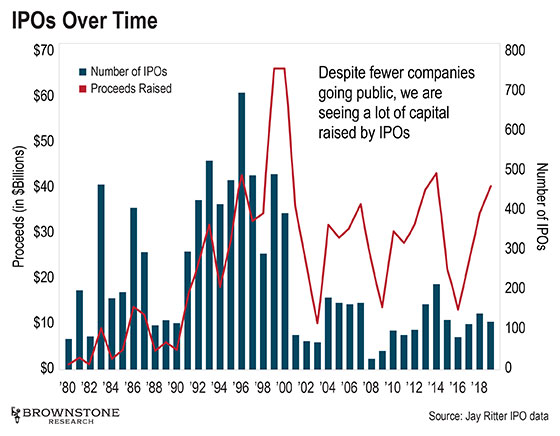 The bars represent the number of IPOs that took place in a given year. And the line represents the proceeds (in billions of dollars) raised from those IPOs.

Look at what happened during the dot-com bubble in the 1990s – the number of IPOs skyrocketed. From 1991 through 2000, we saw record levels of IPOs year after year… and record levels of money were raised as well.

I remember those days clearly. Companies with little more than a vague business plan and a “dot-com” in their name were going public at absurd valuations. That was a bubble.

But look at what happened in 2001 after the bubble burst. IPOs cratered immediately.

Looking at the chart, we are not seeing a massive IPO craze right now like we were back in the ’90s. We are nowhere near those levels. In fact, we are seeing fewer companies go public today than we saw during the 2004–2007 period.

But when we look at the line indicating IPO proceeds, we see something different. Despite fewer companies going public, we are seeing a lot of capital raised from IPOs. This tells us that more money is being raised across fewer companies.

And that’s because the companies going public today are large, well-established companies. In general, private companies today have been raising capital for 10 or more years before they go public. They don’t go public as risky, early stage startups like in the old days. Instead, they go public as healthy companies with mature products and meaningful revenues.

And what this chart doesn’t show is that there are thousands of companies lining up to go public right now. We are staring down a major IPO backlog.

And this is all thanks to an abundance of private capital over the last 15 years. High-quality private companies have been able to consistently raise money and grow their businesses without the scrutiny of being a public company.

But that capital is losing its patience. After a decade or more of growth, they are ready to exit positions and take profits from their successful investments.

Looking forward, we are going to see the number of IPOs increase (as well as the total proceeds raised) over the next two and a half years. There are just too many strong companies in the IPO pipeline. And there is incredible investor demand to gain access to this next generation of companies that have been private for far too long.

We’re in the early stages of a dramatic increase in IPOs that will rival the ’90s. It likely won’t be until 2023 before we start to see a real bubble forming, and before then, we’re going to have some incredible investment opportunities.

What I am seeing in my travels…

After a brief respite during the peak of the COVID-19 pandemic, my travels have kicked back up again. And I am seeing some interesting developments in airports around the country.

To start with, I am seeing Clear kiosks in more and more airports. Anyone who travels frequently should think about using these. Here’s what they look like: 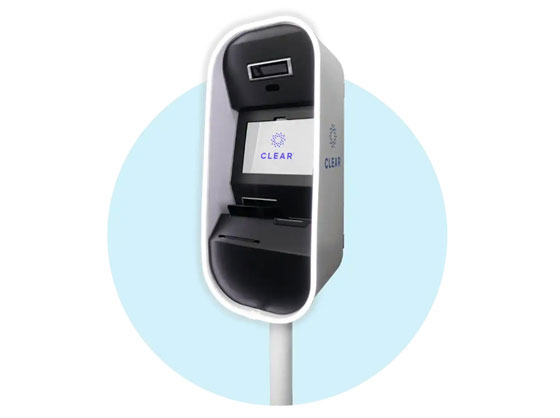 These are biometric identity machines. Travelers simply sign up for Clear’s service, and these kiosks can identify them at the airport. It only takes five minutes to sign up and a visit to a kiosk to finish the process. After that, getting through security is a breeze.

Pre-pandemic, the machines just scanned your fingerprint and boarding pass. Now Clear has moved to contactless identity verification using a scan of our eyes.

Once your identity is verified, a Clear agent will escort you right to the front of the security line. All you have to do is show your boarding pass. No ID is required. It’s even better than the early days of TSA PreCheck when very few travelers knew about the program.

I have used Clear for a few years now, and I couldn’t travel as much as I do without it. It’s such a seamless experience that saves me a ton of time and frustration.

I do have to give up a little privacy by sharing my biometric data, but it is worth it to me. After all, our face has already been captured and is on file if we have a driver’s license.

And I trust Clear with my data a lot more than I trust the Department of Motor Vehicles (DMV).

And here’s what I uncovered recently – Clear is taking its security measures one step further.

Clear’s kiosks are starting to implement technology that enables temperature checks, and airports are going to follow suit. We will see mechanisms in place designed to check everyone’s temperature. That’s to make sure no one is sick and a potential risk to other passengers.

Whether we like it or not, this is the beginning of what I’m sure will be pervasive use of this kind of technology. We won’t be able to get around it if we need to travel by plane.

SpaceX is raising another $1 billion…

On Monday, we talked about the return of the SpaceX Crew Dragon Demo-2 mission from the International Space Station (ISS). It was a beautiful splashdown landing – the first one since the Apollo mission in 1975.

And get this – while the crew was still at the ISS preparing for its return trip to Earth, SpaceX filed for a $1 billion venture capital raise. How’s that for confident?

SpaceX knew the astronauts would successfully navigate the trip back to Earth, and it planned to capitalize on that big event by raising another $1 billion. This raise will get the company one step closer to its mission of going to Mars.

And this raise comes on the back of SpaceX’s last raise in May, which brought in $346.2 million. That put the company’s valuation at $35 billion, which is set to increase to $44 billion after this next raise is completed. That will make SpaceX one of the most valuable private companies on the planet right now.

To piggyback on our IPO insight today, this is a great example of the power of private capital. If this were the 1990s or the early 2000s, SpaceX would have already gone public. But because the company has been able to raise as much private capital as it needs, SpaceX hasn’t needed to do an IPO.

And I can tell you that SpaceX will raise billions more as a private company. It isn’t going to go public any time soon.

However, we do want to watch Starlink. Remember, Starlink is the division of SpaceX that is building a satellite network around the Earth.

As we talked about back in February, SpaceX plans to spin out Starlink and take the company public. A successful IPO of Starlink would empower SpaceX to sell its equity in the business and raise additional funds to power SpaceX’s mission forward.