Right now, biotech stocks are having their “crypto winter” moment.

Many of us probably remember the so-called “crypto winter.”

From the January 2018 peak of $692 billion, the total cryptocurrency market capitalization fell to $93.4 billion by April 2020. That marked an 86.5% decline. It was a painful time for digital asset investors.

The top 10 biotech stocks by market cap globally have each seen their share price gains crater amid all the volatility in the stock market.

Following the broader stock market sell-off earlier this year, the SPDR S&P Biotechnology ETF (XBI) is down about 17%. And the iShares Biotechnology ETF (IBB), which also tracks the sector, has lost around 12% over the same period.

This pullback has created what many analysts are calling a bear market in biotech. This may be the case in the short term. But there’s a key nuance here that many are missing…

We must recognize that the entire sector has been negatively affected by the pandemic policies of the last few years.

We’ve witnessed disruptions of important clinical trials… the delaying of milestone developments for companies’ respective therapies… and a whole litany of other issues related to the glut of pandemic policies. These issues have in turn stymied the progress of an entire industry.

Right now, the sector is looking to take a breath…

And even though biotech has faced headwinds this year, I want readers to know that I haven’t “given up” on this technology and industry. I’m as bullish as I’ve ever been on precision medicine, CRISPR genetic editing, and biotechnology.

On February 28th, the U.S. Patent and Trademark Office (USPTO) ruled that the foundational patents for CRISPR genetic editing technology belong to the Broad Institute (Harvard & MIT). I have been predicting this outcome for years.

For newer readers, CRISPR genetic editing tech is what will enable us to treat the 6,000 plus diseases caused by genetic mutations that are currently incurable. This is why this is such a groundbreaking case. Billions were at stake with this decision.

My Exponential Tech readers are already familiar with this company. It’s engineering one of the most important breakthroughs in genetic editing technology today…

The company shared data on its EDIT-101 therapy for LCA10 last year. LCA10 is a leading cause of inherited blindness in children.

And Editas demonstrated that its EDIT-101 therapy is effective in restoring sight to the blind.

Two trial participants spoke of their experiences after receiving the treatment. And their testimonials were simply incredible.

One patient interviewed by NPR said that he was riding in the car one day and he clearly saw a red car driving past. He could also distinguish between the different colors in a DJ’s flashing strobe light at a wedding.

These patients’ experiences are a testament to the breakthrough technology Editas is harnessing.

And Editas’ exclusive license means that other companies must license their CRISPR patents. That will create an income stream worth hundreds of millions, maybe even billions of dollars for Editas.

This patent win is an incredibly bullish development for EDIT.

And all of this is just the beginning…

The USPTO’s patent ruling is also bullish for the entire industry.

With the patent battle finally resolved, new companies will be able to start working on their own CRISPR therapies.

And the fact is, CRISPR can treat so many diseases that a single company could not develop all the therapies. As such, we want to see many companies working in this space – each with its own specific focus.

There are over 6,000 diseases caused by genetic mutations. CRISPR may be the solution to each of them.

And those biotech companies harnessing precision medicine and genetic editing technology will become the gatekeepers for revolutionary new treatments in the coming years.

I want readers to know that I’ve been preparing for this moment… In fact, I called biotech’s “crypto winter” moment last year.

And even back then, I saw strong signs of a massive turnaround in biotech in 2022.

How We’ll Emerge From the “Biotech Winter”

Last year, we actually did a few important things to bolster our research capabilities in biotech.

First, Brownstone Research hired a full-time biotechnology specialist. This team member comes from the industry. And he’s been a great asset for our biotech research.

The other thing I did was do some “boots on the ground” research. Early last year, I went to South San Francisco. That’s where many of the best biotechnology companies are headquartered. 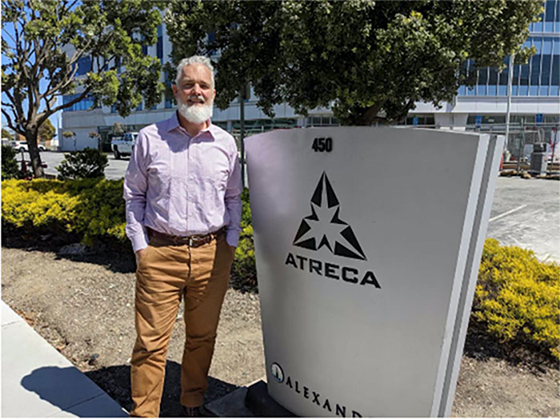 Jeff in front of the headquarters of Atreca, a model portfolio company within Early Stage Trader

And while I was there, one thing stood out. The area was booming.

I couldn’t believe the amount of new construction. Cranes, construction, and new buildings were everywhere. And almost all of it was to support the incredible levels of venture capital investments pouring into early stage biotechnology.

In the chart below, we can see that, despite the depreciation in biotech stocks, venture capital investment into private biotech companies has continued apace. 2021 saw over $52 billion in private investments flood the biotech space – a 32% increase over 2020. 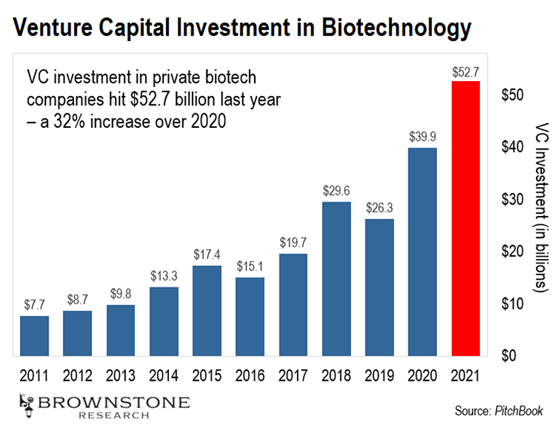 And just like 2021’s funding levels beat out every previous year… I’m predicting that 2022 will mark another major increase in venture capital (VC) funding – and an inflection point for the entire industry.

Simply put, the industry is starting to get back to a “normal” pace.

Clinical trials are picking up again after the stop-start dynamic of the last two years. The companies I’m following are working hard to push their therapies through the stages of clinical development and ultimately to Food and Drug Administration (FDA) approval.

And despite the worry in the markets, biotech funds are starting to see some positive momentum as I write. In fact, the broad biotech iShares Biotechnology ETF (IBB) rebounded 12% from its first-quarter lows. That’s great to see.

The record levels of venture capital in biotechnology are going to pay off with exciting developments and promising drugs in the coming months.

So rather than turning to public companies… I believe the biggest long-term gains in biotech will come from the private markets.

The Best Biotech Deals in 2022

And I’ve been preparing an important strategy session for my readers… where we’ll talk about our method for building truly generational wealth… no matter what the overall market is doing.

So on Wednesday, April 6, at 8 p.m. ET, I’ll share what I’m doing with my own portfolio… and a strategy that’s the closest thing we’ll find to inflation-proof… recession-proof… and even crash-proof.

I’m excited to share this strategy with you… and show you how to benefit as the next crop of exciting private companies makes history.

You can go right here to accept my invitation to attend this strategy session. I hope to see you there.