I’m currently in Washington supporting the Chamber of Digital Commerce for Congressional Blockchain Education Day. We are working hard to educate Congress on cryptocurrency and blockchain technology. And we are pushing for clear regulatory guidance that will allow the U.S. to stay competitive in what I believe will be one of the most transformative technologies of the next several decades.

I’ll get an update to you on our dealings in D.C. early next week. And I have a few related insights to share with you today.

“This is indeed a national security issue. We will not allow digital asset service providers to operate in the shadows.”

That’s what Treasury Secretary Steven Mnuchin said about Facebook’s cryptocurrency, Libra, on Tuesday. Remember, Facebook’s Libra is designed to be a completely fungible digital currency. It could eventually serve as a global reserve currency alongside the U.S. dollar.

Mnuchin added, “They and others have a lot of work to do before they get us comfortable.”

That last quote keeps the door open for Libra… And it speaks to Facebook’s grand strategy.

Facebook is working hard to present Libra as a currency that is controlled by an association of companies, not solely by Facebook itself. Facebook executive David Marcus told the Senate Banking Committee this week that Facebook is not in charge of Libra. It is just a contributor… along with the 26 other companies who invested $10 million in the project. And Marcus expects that list to ultimately grow to 100 companies.

In other words, said Marcus, no single entity will control Libra.

Of course, this has been Facebook’s message from the start… Even though it developed Libra entirely in-house. And Facebook was strategic in announcing its initiative a year ahead of launch. Facebook is playing the long game…

Facebook and other tech firms are sitting before Congress this week to discuss a variety of topics. And while the mainstream media sees the hearings this week as bad for Libra… Facebook planned for this.

It announced Libra so early to allow time for this back-and-forth with lawmakers. It knew it would take time to get Congress… the Senate Banking Committee… and the SEC comfortable.

So, Facebook is right on track. Libra’s launch is set for next year… And Facebook thinks it will have the permissions it needs to go full steam ahead by then.

The IRS is gunning for cryptocurrency…

This comes from a massive 181-page presentation that was leaked from an IRS cyber training session. The presentation was about training IRS agents to find hidden cryptocurrency holdings.

This is scary stuff. It tells us that the IRS is getting aggressive.

Of course, the ironic thing is that the IRS has not provided clear guidance on the tax treatment of cryptocurrencies. As a result, tax professionals don’t know how to deal with the nuances of filing taxes with regard to cryptocurrency gains.

In reality, most Americans want to file their taxes accurately. It’s this lack of clarity that makes it difficult for cryptocurrency holders. Yet the IRS wants to go after them anyway. That’s a problem.

This has been a major focus of the Chamber of Digital Commerce. And it’s a big reason why I am in Washington this week.

We are working hard to educate Congress about cryptocurrency and digital assets. The Chamber, in conjunction with the Congressional Blockchain Caucus, has also been trying to provide guidance to the IRS in hopes of clarity on tax filing requirements.

We have made a lot of progress to this end… But we have a lot more work to do. I will keep you posted on how this week goes.

Here’s what I can say to cryptocurrency holders…

Until we get more clarity, the smart assumption to make is that every time we sell a cryptocurrency… even just moving from one digital asset to another… is a taxable event. It is very important for us to declare any gains from those sales on our tax filings. I always recommend speaking with a tax accountant on these matters. And always declare any form of gains from any sale of a digital asset.

Right now, every restaurant in the world needs somebody to wash dishes. This person is back in the hot kitchen for hours at a time doing nothing but scrubbing dishes. It’s a boring job that nobody really wants to do… And often it’s not done well. We’ve all at some point been in a restaurant and noticed a dish that wasn’t properly clean.

Well, that’s where Dishcraft Robotics’ robot comes in. (Click the image below to watch a demonstration.) 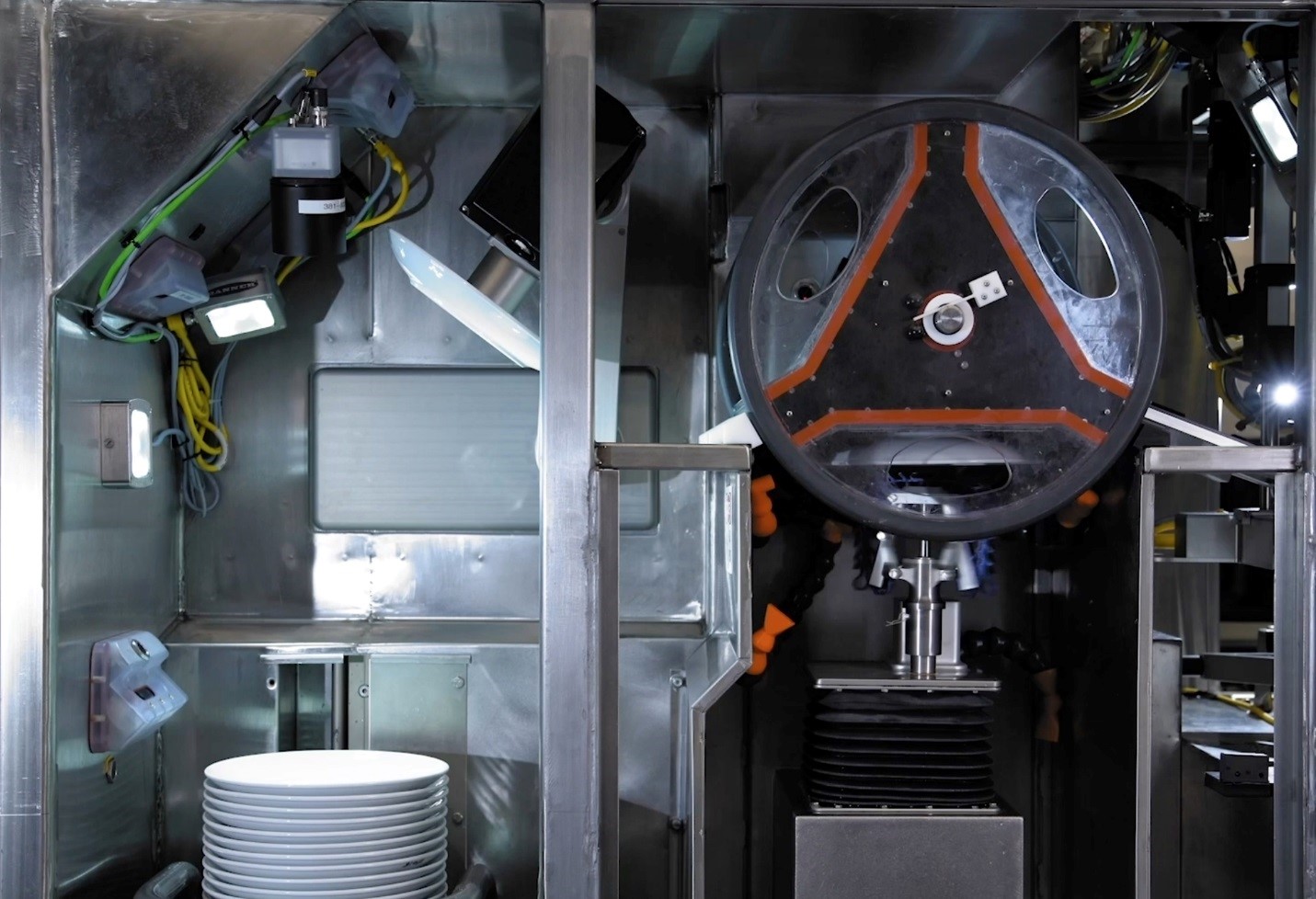 A restaurant employee sorts and stacks dirty dishes onto a cart and wheels the cart next to the robot. From there, a robotic arm picks up each plate and moves it over to the scrubbing section. Then, the robot cleans each dish individually with a rotating scrubber head.

After scrubbing, the robot inspects the dish using computer vision to make sure it’s clean. If it’s not, the robot engages another scrubbing cycle. And if the dish passes inspection, the robot places it into a standard dish rack where it runs through a drying machine. Then an employee simply takes the dish back to where it needs to go.

How incredible is that? This technology takes a task that currently takes an employee hours to complete each day… and reduces it to minutes of automated labor.

I believe this targeted approach is the best way for companies to tackle robotics and artificial intelligence (AI) right now.

We aren’t at the point where we should be thinking about a great general AI that can solve every problem. Or a perfect humanlike robot that can do everything.

We have very specific problems that can be solved by applying robotics and AI right now… And the Dishcraft robot is a great example.

P.S. I’ve mentioned it before, but I want to make sure every reader has the chance to sign up for my free investing summit happening next week. It all goes down on July 24 at 8 p.m. ET. On that date, I’ll reveal a project I’ve been working on for the last five years. It’s taken a long time. But I’m finally ready. Go right here to get the full story.