What a difference a few days make.

On Friday, I wrote about the fact that the rate of hospitalization in New York City hospitals was declining. This was something that wasn’t being covered anywhere in the press.

And the weekend brought some very encouraging news.

Better yet, the hospital discharge rate was “way up.”

These data points are both meaningful and encouraging.

And a nice chart published by The Financial Times did a good job visually representing the trajectories of confirmed cases by countries. 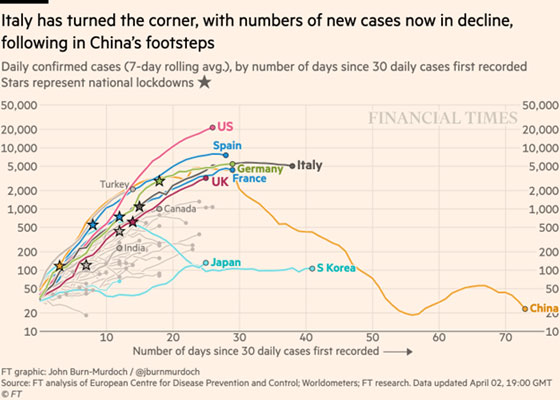 As we can see in the chart above, the number of new confirmed cases in Italy is already on the decline. The U.S. curve is about 10–11 days behind Italy. And Spain has also rounded the curve, demonstrating a decline as well.

With all of the data that I have seen in the last four days, I believe that the U.S. will have hit its peak within the next seven days. And while we’ll still have physical distancing constraints over the next 2–3 weeks, I believe that we can begin the process of returning to normal in May.

The markets certainly liked the glimmer of hope today.

What the T-Mobile/Sprint merger means for consumers…

We got big news last week. The merger between T-Mobile and Sprint has been completed. This is great news. And the timing couldn’t be better…

As we know, there was a large contingent opposed to this merger. It said that reducing the number of wireless carriers in the U.S. would leave fewer choices for consumers.

Of course, I have said all along that this group was wrong.

And that’s because neither one of these companies would have had the financial resources or the spectrum to build out a nationwide 5G network independently. So had they not combined, the U.S. market would have had only two 5G wireless networks to choose from – AT&T and Verizon. In other words, less competition.

Having a third choice in 5G is great for consumers. And the T-Mobile/Sprint combined entity is taking a unique approach…

T-Mobile has been targeting the lower high-frequency bands to roll out 5G nationwide. These bands don’t require cell towers to be as close together, so it’s faster to get the network built out this way. T-Mobile hopes to be the first to have a nationwide 5G network.  That’s the marketing strategy behind T-Mobile’s infrastructure build-out.

But there’s a tradeoff. The lower frequency bands do not enable the super high speeds that 5G can deliver. Remember, these higher frequencies are what will deliver speeds 100 times faster (or more) than the average speeds we experience on the 4G networks that we use today.

With the lower frequency bands, T-Mobile/Sprint will deliver around 100–150 megabits per second over its lower band 5G network. It will be substantially slower than the Verizon and AT&T 5G networks.

That said, it will still be around 10 times faster than the average 4G speeds that we see today. So consumers will still perceive it to be lightning fast. I rarely experience 15 Mbps speeds over the 4G wireless network in my neighborhood, so I would be absolutely thrilled with 150-megabit speeds.

So it will be fun to see how consumers respond to different options. Will they go with T-Mobile/Sprint at the “lower” 5G speeds? Or will they prefer the higher, 1 Gbps speeds of Verizon and AT&T, even if it means waiting longer for 5G to come to their area?

Clearly, the consumers have more choice thanks to the T-Mobile/Sprint merger. I’m excited to watch this story play out.

And for investors, here’s the important implication…

With the merger complete, the largest hurdle for these network providers is in the rearview mirror. 5G networks rollouts are steaming ahead.

With every month that passes, city after city is “lighting up” 5G networks. The entire world will soon realize the reality of 5G networks. That will send a handful of 5G stocks significantly higher.

I want all my readers to be positioned before that happens. That’s why I’m hosting a free 5G investing summit this Wednesday at 8 p.m. ET. I’m calling it The State of 5G.

I’ll give details on the 5G stocks you’ll want to own today for potentially life-changing returns. And I’d love it if all Bleeding Edge readers could join me. Reserve your spot right here.

This next insight may seem odd, but it is quite clever.

Researchers at Nanjing Tech University are doing some incredible work. They just found a way to turn fish scales into single-use wearable electronics. These are thin displays that stick to clothing or even our own skin to perform a single function.

There are already tons of applications for single-use wearables…

Imagine going to a music festival and having a personal display that listed details about the different bands playing. Or going to a concert and having the lyrics displayed for you.

These wearables can also serve as a stopwatch for sporting events. They can be a security badge for conferences and events. And they can even serve as temporary tattoos.

The problem with existing wearables, however, is that they are made of plastic. And as we know, plastics are made from nonrenewable resources, and many are not recycled, resulting in unnecessary waste in our oceans or landfills. That’s why the work coming out of Nanjing is so interesting. 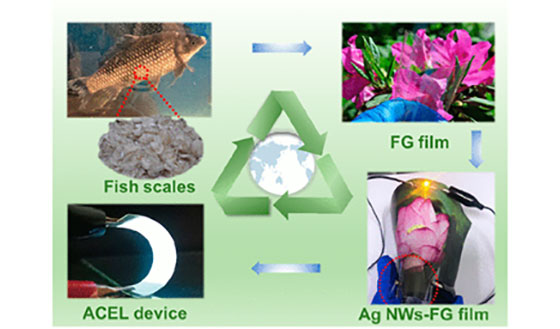 Fish scales are organic matter. And 3% of the world’s production of fish is just the scales that are being discarded. Why not put the material to use?

The team at Nanjing washes down the fish scales, chemically treats them, and makes a gelatin-like film. The team then coats the skin-like film with nanowires to create a thin, flexible display.

The result is a device that’s perfect for one-time usage. It can serve its one purpose and then be discarded without damaging the environment. The researchers demonstrated that these devices dissolve in hot water. And they break down in soil in just three weeks.

To understand what’s coming down the road, it is always useful to track what is happening with key components or materials that are used in an end product… like a smartphone.

TSMC, the largest semiconductor manufacturer in the world, announced that its 5 nanometer (nm) semiconductor processing technology is on track for mass production this quarter.

These are the chips that will eventually go into the 5G-enabled iPhone. In fact, without them, there would be no 5G iPhone.

TSMC’s 5 nm technology will deliver another 20% power reduction and 15% performance improvement… all at a size that is another 45% smaller than the 7 nm chips. These chips are smaller and use less energy but are still more powerful. Amazing…

This is great news. There has been some speculation that Apple’s 5G iPhone would be delayed because of the turmoil around COVID-19. But that doesn’t seem to be the case.

With the 5 nm production on schedule, we can still expect Apple’s 5G phones to come out this fall.

Further dispelling rumors, Apple’s contract manufacture, Foxconn, said it will take these chips and begin production of the new iPhones in June. And Foxconn recently confirmed that it is still on track for a fall release of the 5G iPhone.

The bottom line is that COVID-19 is not going to stop Apple’s new product launch… its biggest since the original iPhone in 2007… or the 5G wireless technology boom.

And TMSC’s announcement has big implications for the rest of the industry as well.

As I said, these 5 nm chips represent the bleeding edge of semiconductor technology. Right now, 7 nm is the standard. When we drop down to 5 nm, the chips get smaller, faster, and more efficient.

Top semiconductor companies like AMD and NVIDIA are also in the process of using TSMC to build 5 nm chips of their own.

P.S. This incredible news with TSMC and Apple’s 5G iPhone tells us one thing: The 5G wireless boom is moving forward unimpeded. Even a global pandemic hasn’t been able to slow it down.

That’s why I’m hosting my 5G investing summit on Wednesday at 8 p.m. ET. I’m calling it The State of 5G.

During the event, I’ll share more evidence on why 5G wireless networks are unstoppable. And the build-out has become even more critical than before.

And because of the recent market volatility, several “best of breed” 5G companies are trading at bargain valuations. At these levels, 1,000% gains are absolutely in play with key investments in 5G companies.

For many investors, COVID-19 is a wealth-destroying event. But it doesn’t have to be. I want all my readers to turn it into their greatest opportunity for wealth creation. That’s what my 5G summit is all about. It goes live on Wednesday at 8 p.m. ET. Go right here to save your spot.