It’s natural for us all to be conservative with spending during a crisis. It is human nature to do our best to protect and preserve our assets during times of trouble.

One of the best ways that we can see this dynamic is by having a look at personal saving rates.

And the Federal Reserve Bank of St. Louis publishes this data. The savings rate simply shows us the percentage of our income that we save compared to what we have to spend for our daily necessities and taxes. 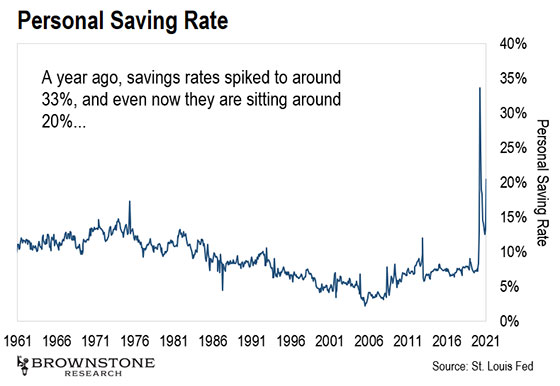 The above chart shows us that the fear- and panic-induced pandemic was like no other.

A year ago, savings rates spiked to around 33%, and even now they are sitting around 20%. These numbers are far and above what the U.S. experienced during the recession in the mid-‘70s, where the peak only made it to about 17%.

And the savings rates now are more than double what we saw during the financial crisis from 2008–2009… and those were dark times.

It’s not a surprise to see these fear-induced, sustained and elevated rates when we reflect back on 2020. The extreme efforts that politicians and the mainstream media used to try and scare us to death – deciding which “science” and scientists were okay to listen to – have affected us all.

Due to the desire to drive a political narrative, scientific research that would have allowed rational policy decisions was obfuscated, censored, and at times even denigrated. And it all happened at the expense of some of the most accomplished scientists and researchers across various fields.

As we now know, much of what we were told was not accurate. With each week that passes, we learn more. And ironically, the economy was so strong going into the pandemic, it has been very difficult to slow down – no matter how hard so many have tried.

As a perfect example, this week brought great news showing that initial jobless claims for unemployment benefits are at their all-time pandemic low of 684,000. And the early March numbers for the U.S. unemployment rate are down to 6.2%… and dropping.

We have good reasons to be optimistic. In the months ahead, as we return to a more normal work environment, we can expect unemployment to again fall back below 5%.

And when the personal savings rate falls back down into a more normal range around 5–7% – just as we saw over the last two decades – we’re going to see an incredible amount of economic activity. Yes, this will be very good for the economy and for the stock markets.

And before we get to our insights today, I want to remind readers that the replay of our Timed Stocks: Final Countdown investor summit that aired last week is only available for a short time longer.

For those interested in building a portfolio of the best early stage biotech companies on the planet, this summit is a must-see event Just go right here for the replay.

In fact, I’m in the middle of research for my next early stage biotech recommendation, which I may release within the next 24 hours. This isn’t one to miss…

Economical clean energy is less than five years away…

As regular readers know, I have been tracking the rise of nuclear fusion technology very closely. And one of my favorite companies in the space, Commonwealth Fusion Systems (CFS), just made a big-time announcement.

CFS is building a 47-acre research and manufacturing facility just west of Boston. The facility will operate at the location of the old Army post Fort Devens, which is now an economic development zone. That means CFS is getting some tax incentives to build there. It’s a smart move.

As a reminder, nuclear fusion is essentially the power of the Sun. It involves taking two separate nuclei and combining them to form a new nucleus. This produces an enormous amount of energy. And it is 100% clean.

CFS is pursuing the classic tokamak design for its nuclear fusion reactors. We talked about this design back in January.

The key to CFS’s approach to its reactor has been through the development of new superconductors that enable advanced magnet technology. This is necessary to control the super-hot plasma in the reactor, causing hydrogen atoms to fuse and release energy. 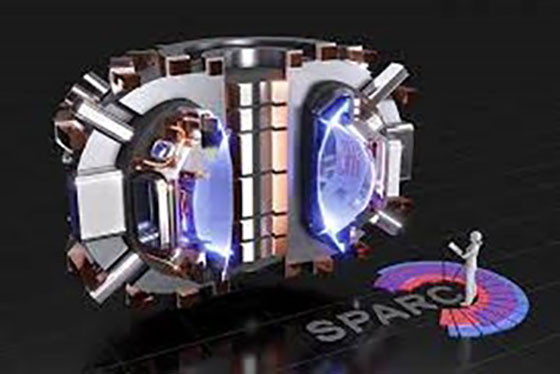 CFS believes that this technology will enable compact fusion reactors small enough to fit inside a small room. Yet these reactors will produce enough energy to power 100,000 homes each.

So this is one of the most exciting projects in the nuclear fusion space.

And it is very well funded. CFS has raised over $250 million to date, and it will have no problem getting additional funding in the private markets right now. Clean energy is such a hot space right now, and CFS has a clear road map to develop a nuclear fusion reactor.

And get this – the new facility is being built right now. CFS expects to have a full-scale demonstration of its new magnet technology by summer. We are just months away.

And the company is in a full sprint right now to go from demo to final product. To that end, CFS is doubling the size of its team from 150 to 300 employees. That will put the company on track to potentially have a fully functional nuclear fusion reactor by 2025.

That means that the first demonstrations of utility-scale, economical clean energy are less than five years away. I can’t overstate how important this is.

And this is why the venture capital and private equity communities are so excited. They won’t have to wait 20 years for a return. We are finally within a relatively short window from an investment perspective.

Nuclear fusion is how we get away from burning fossil fuels without sacrificing our ability to provide for the power needs of everybody on the planet.

Rather than poking around at the edges and making small contributions to baseload energy generation, nuclear fusion can literally provide for 100% of the world’s need for electricity.

Blue Origin plans to simulate the Moon’s gravity for NASA…

As we know, Jeff Bezos recently stepped down from his full-time role as Amazon’s CEO. One of his motivations was to spend more time working on his private space company, Blue Origin.

And it appears to be paying off…

Blue Origin just announced an interesting partnership with NASA. The company is going to use its rocket technology to simulate the Moon’s gravity inside its spacecraft. This will allow NASA to conduct training experiments in preparation for its return to the lunar surface in 2024.

Here’s why this is important…

The Moon’s gravity is about one-sixth of Earth’s gravity. This low-gravity (low-G) environment alters the physics of how people and equipment move and act. So if we want to set up a permanent lunar base, we’d better have a solid understanding of how machinery will need to be operated in low-G.

That’s what this is all about.

And how Blue Origin will simulate gravity is absolutely fascinating. The company will launch its rockets and capsules up to space to a zero-G altitude.

From there, Blue Origin will spin the rockets at 11 rotations per minute to create centrifugal force. That will generate artificial gravity within the capsule at a level that’s on par with the gravity on the Moon’s surface. Amazing.

And these missions are going to start next year. Blue Origin is already in contact with the companies that produce the heavy equipment that will be tested.

So we’re looking at very specific initiatives with an accelerated timeline here. This shows us that NASA is serious about getting back to the Moon in 2024. We’re less than four years away.

We’ll wrap up today with a warning.

Cybersecurity firm Malwarebytes recently discovered that the popular Barcode Scanner app available in the Google Play store was up to no good. The app secretly installed malware onto every Android phone that downloaded it.

The Barcode Scanner App Is Up to No Good 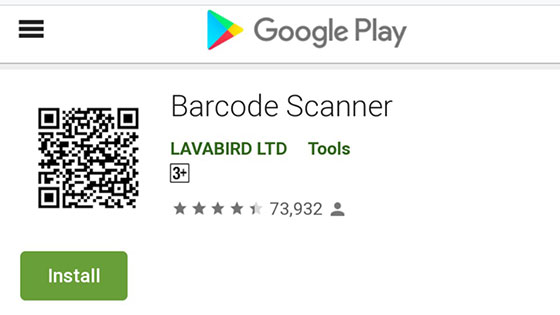 And here’s where it gets really interesting – the app was perfectly clean at first.

It was launched in 2017 by a company called LavaBird, and back then it contained no malware whatsoever. It was a useful app. Consumers used it to read QR and UPC codes to identify products. And they used it to generate barcodes to redeem discounts at e-commerce shops.

Barcode Scanner was so useful that it boasted over 10 million downloads from the Google Play store. But on November 25 of last year, LavaBird sold its ownership of the app to an account named “the space team.”

And “the space team” quickly made its move. The new owner snuck a nasty piece of malware into Barcode Scanner’s most recent update. This gave the app the ability to take control over every Android phone that downloaded the update.

And the malware scammers put it to use right away. They began hijacking web browsers and redirecting them to pages containing advertisements. No doubt they were paid handsomely for directing traffic to these pages.

So here we have a “free” app that was useful to Android users for over three years. But in a “buy to infect” scheme, bad actors were able to use this popular app to hijack phones and collect their data.

Even more alarming, the scammers gained access to the app’s code during their negotiations with LavaBird. That allowed them to test if their malware went undetected by Google Play under another company’s name before the purchase officially went through.

And the most concerning thing for Android users is the fact that Google did not catch the malware in Barcode Scanner’s latest update. That update should never have been approved through the Google Play store.

Google has removed Barcode Scanner from the Play Store now that the malware has been detected. But Google can’t remove the app from those 10 million-plus phones that have it.

Unless those people remove the app themselves, they are still at risk. And it’s likely many of them aren’t yet aware of this.

If readers aren’t sure if they have downloaded the bad app, try going to Settings > Apps & Notifications > See all… apps > Barcode Scanner. Select Advanced > App details. This should take you to the listing in the Google Play store. (These steps may differ slightly depending on your device.)

If the Google Play store listing doesn’t exist, you have the bad Barcode Scanner app and should delete it right away.

So this is another great example of why I always recommend Apple’s iPhone over Android phones. Apple’s iOS operating system is far more secure than Android to begin with, and Apple thoroughly tests and vets every app and update before it is made available to iPhone users.

As a bonus, Apple is much more respectful of consumer data than Google, which collects and sells our data for a profit.

And this episode is also another good reminder that nothing is truly “free.” If an app is offered as a free download, it simply means users are paying another way.

And in this case, the cost was not something any of us would have agreed to…