I don’t value the news all that much.

Not only does the news media kick up the hornets’ nest whenever it can, it’s often just flat-out wrong.

And I’m not alone. In a survey by Pew Research, 70% of Americans said that weather was the most important “news you can actually use.” Other top topics included crime (44%) and traffic (41%).

Despite what the media might want us to think, the news is often a terrible place to get useful information.

And this is critically important for us to remember as investors. Because especially when markets tumble, news headlines are the last thing we should listen to.

That’s because when traders’ conviction drops, so does liquidity in the markets… and everyone becomes a lot more sensitive to volatility.

Add some inflammatory headlines to the mix, and stock prices can whip around madly, scaring many skittish people into selling.

But here’s why we shouldn’t fall for this trap…

Over the past year, the news has spooked the markets with a number of scary headlines.

They’ve tried to convince us that a Biden win would tank the market… that we wouldn’t recover from the COVID-19 market crash for years… and more recently, that inflation will rattle the whole world’s economic recovery as we open back up post-pandemic.

But the bigger picture tells a whole different story. 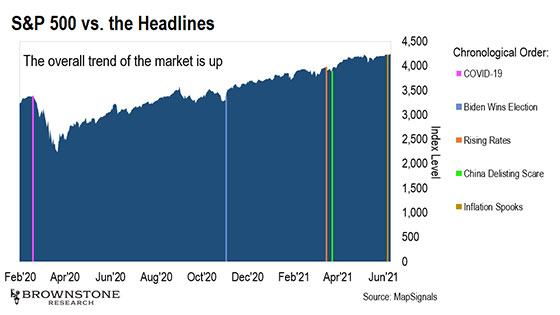 Look at what stocks have done since the beginning of 2020.

Despite the various news stories trying to convince us that the stock market is doomed to drop… the overall picture has been a distinct upward trend.

Every major news headline written to stoke fear and rattle nerves worked, especially during the March crash. Many people sold due to fear that the markets would collapse.

But stocks just don’t care. And it’s not just this last year – they don’t care in the long run either. 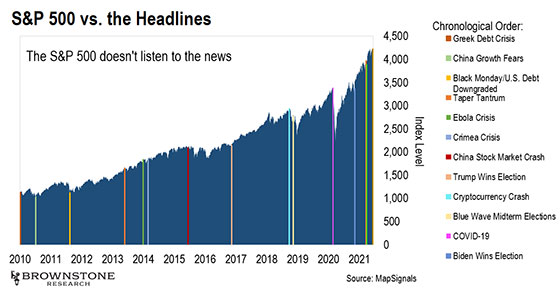 The Greek debt crisis… the crypto crash… the Ebola epidemic… None of these world events made a permanent impression on the stock market.

Ultimately, each of the scares we’ve seen has been a nonevent for stocks. As the chart above shows, since 2010, we’ve experienced short-term dips in the market – which felt uncomfortable at the time – but over the long term? Stocks just keep marching higher.

And as investors, this is what we need to keep in mind.

A Written-Off Sector of the Market

Longtime readers will recall that I’ve used my 20+ years of Wall Street experience to build a stock-picking system that looks for “outlier” stocks. These are companies that don’t follow the rest – they perform exponentially better than “normal” stocks.

And my system scans thousands of stocks every day to spot these outliers. I look for fundamental strength, bullish technical patterns, and most importantly, unusually large volumes of buying. This volume tells me when a major Wall Street institution is likely getting involved. That’s what I call the “Big Money.”

And despite what the news media might want us to think, my system is showing strong buying signs not just in the overall markets… but in the unloved growth area.

Since February, growth stocks have gone from a media darling to an outcast. [A growth stock is a share in a company we expect to grow at a rate significantly above the market average.]

Headlines have declared growth stocks are done for:

“Why Value Investing Should Beat Growth Investing in the Next Decade”…

And even: “6 Reasons Apple Is Dead Money”…

But that’s not what my recent research is showing.

Not only that, but 11% of the growth stocks that popped up on my radar were software companies. That might not seem like a lot, but remember that this has been a hated subsector since February.

Any return to growth is a cause for cheer – especially when growth buying is happening in leading tech areas.

And just to be clear, to get a buy signal in my system, a stock has to be trading higher in price with above-average volume and solid “up volatility.”

Out of more than 6,000 stocks, there is an average of only 60 buy signals on any given day. In other words… buy signals only happen on about 1% of stocks every day.

So why would the news media spend so much time telling us that growth is dead if that’s not what my evidence shows?

It’s very simple… and it’s one of the main reasons we shouldn’t pay attention to the news headlines for investing advice.

The news media is for profit, and it makes its money by selling advertising. More clicks mean more views of ads. More ads mean more money.

And humans are drawn to negative stories.

We react emotionally to negative news. We are dying to know what happens. So we click… and often see a sponsored ad before we can view the story.

And it turns into a feedback loop. When buyers get nervous, the news headlines can quickly spin a small dip all out of proportion.

So when you see negative headlines in the New York Times or on the evening news, just keep this in mind.

The news says we’re going down.

My data says we’re going up.

And if you remember the charts I showed you earlier, history has proven one of us correct.

So if bad headlines make you nervous and want to sell, then I have some advice…

Maybe we should just focus on the weather report. Or maybe not even.

Remember Bob Dylan: “You don’t need a weatherman to know which way the wind blows.”

P.S. My system informs every trade we make with Outlier Investor. It makes it easy to ignore the bad news headlines because we simply follow the data. We have real information grounding us against the small-scale moves of the market.

And it’s helping my readers make money. Right now, our model portfolio of stocks is up an average of 65%.

If any readers would like to learn more about how it works – and why Jeff Brown asked me to join Brownstone after he saw it – then I encourage you to simply go right here for the full story.