I know that we’re all feeling it right now. When we look into our brokerage accounts each day, this pullback hurts. The fear and panic that comes with a sudden drop – like we’ve seen over the last two weeks – is unnatural.

This is what happens when a government employs bad monetary policy. Ever since the Fed announced another 50 basis point rate hike last week, stocks have fallen sharply. And they’ve continued on a downward grind, like we’ve experienced most of this year.

Year to date, the S&P 500 is down 17%. The Nasdaq Composite is down even more – around 28%. The feedback loop since late last year has been really tight, and we can quickly see the effects of bad policy decisions.

Yet there are two different universes in the world of investing, and they act quite differently in times of market turmoil. One is, of course, the publicly traded equity markets, which as we are seeing right now are getting whipsawed right now with wild volatility.

What frustrates me the most is that all of the chaos could have been avoided had the Federal Reserve done its job, and the government hadn’t egregiously printed trillions of dollars.

The good news is that it will get better. While it’s terrible right now, we’re seeing very attractive valuations on best-in-class growth companies that will lead the way in the next bull run in the public markets.

Another universe of investments, private investments to be specific, has been exactly the opposite of what we’re seeing in the public markets right now. It’s actually the other half of my own personal portfolio that not only hasn’t declined in value… it has increased in value during this market turmoil.

In this way, private investments have been the “calm” during the storm. In many ways, they are a hedge against market volatility and inflation.

This is because, by definition, they are high growth investments that are growing at a pace that by far outpaces any level of inflation. And because they don’t have to worry about quarterly reports or Wall Street analysts getting their story wrong, they are able to keep their heads down and focus on building and growing their businesses.

I speak with early stage founders every week, and they are simply not bothered by what’s happening in the public markets. Consistently I hear, “we’re just going to keep building.”

And that’s exactly what happens.

Even during the last few months, the private valuations of many companies have increased dramatically with each subsequent funding round.

Private companies are increasing in value, which is exactly the opposite of public companies that are feeling the short-term effects of this market turmoil. It may seem counterintuitive, but that’s one of the things that makes private investing such an incredible asset class.

That’s why having a portfolio of high-growth private companies is always a smart approach for investors. Not only do private investments deliver extraordinary returns, but they also give us peace of mind when the public markets are a mess.

That’s why I’m currently planning a very important event. There, I’ll show readers how to access these kinds of private deals – even if we’re not an accredited investor. And believe it or not, it is possible to invest in most private deals with as little as $100.

And there’s one kind of private investment I’m particularly excited about right now – “crypto placements.” Despite the market turmoil in publicly traded digital assets, this latest pullback is presenting an incredible opportunity to build positions at the most attractive valuations.

So if you’re worried about the current market environment, I’d like to invite you to attend this upcoming summit on Wednesday, May 18 at 8 p.m. ET. It’s going to be an informative evening… and could even help us build wealth in these volatile times.

A synthetic cure for obesity…

The Phase 3 trial of tirzepatide included over 2,500 patients across nine different countries. The average weight of clinical trial participants was roughly 250 pounds. Each was given weekly injections of the drug in varying doses over 72 weeks.

And the results were phenomenal.

The patients experienced an average weight loss of about 52 pounds. In percentage terms, they reduced their body weight by an average of 22.5%.

That’s transformational. We’re talking about the difference between being pre-diabetic with comorbidities and then having a healthy body-mass index (BMI).

And here’s the kicker – the patients didn’t have to change anything about their lifestyle at all. All that happened is that they no longer felt the desire to consume the same number of calories as before.

That’s because tirzepatide contains synthetic versions of two key hormones – GLP-1 and GIP. Our bodies release these hormones after a meal to make us feel full.

By maintaining a schedule of weekly tirzepatide injections, patients simply didn’t feel the need to eat or drink nearly as much… That’s how they lost so much weight.

So I see this as one of the most exciting drugs in Phase 3 clinical trials today.

For context, over 42% of people in the U.S. are considered to be clinically obese today. That’s nearly half the population. I was actually one of those people back in 2020 when I found out that I was pre-diabetic.

It took me a year of exercise and training and radical changes to my consumption to return back to a healthy weight. It had a transformational impact on my health, energy, and immune system. But it was difficult, painful, and even uncomfortable at times.

Still, I’d do it again. But what if there was a way to affect the same change and have some help in doing so? How many people would jump at the chance to lose 22.5% of their weight just by taking shots each week?

What’s more, tirzepatide provides similar benefits to bariatric surgery… except with no invasive surgical procedure necessary. That makes this drug a no-brainer for anyone considering therapeutic approaches to weight loss.

This is a blockbuster in the making. I’ll be watching the remainder of the clinical trial closely.

Apple, Google, and Microsoft are partnering to change our passwords…

There’s quite an interesting development happening in the world of high tech right now. Apple, Google, and Microsoft are getting together. These certainly seem like strange bedfellows considering how they each compete so heavily with one another in certain areas.

The three tech giants just teamed up to accelerate the Fast Identity Online (FIDO) Alliance. This is a push to implement new password standards across the internet.

Today, the way consumers use passwords on the internet is largely insecure.

To stump hackers, we should use a long, complex, and unique password for every site and application we use. And for maximum security, these passwords shouldn’t be words or phrases. They should be long strings of random letters, numbers, and symbols.

Of course, it’s not practical for consumers to manage hundreds of different passwords like this. They are impossible to memorize.

That’s why most people use a simple password for everything. The problem is this makes them vulnerable to hackers.

And that’s what Apple, Google, and Microsoft are teaming up to solve.

The idea is to build a new standard that uses biometric passwords. This includes fingerprints, face scans, and possibly even voice recognition.

We already have a feel for how these biometric passwords work. Many of us use our fingerprints or face scans to unlock our smartphones already.

The key is, biometrics are isolated to a specific platform right now. Our Apple FaceID doesn’t work for anything outside of Apple’s universe.

And that’s what this partnership is all about… The new biometric standard will work across platforms, devices, and web browsers.

I see this as a big step forward in hardening password security for normal consumers. And it will provide a great convenience for us as well.

The FIDO Alliance plans to roll out early versions of this new biometric standard over the next 12 months or so. I’m very interested to see what the functionality looks like.

If implemented correctly, this should help reduce phishing attempts dramatically… And the consumer experience for accessing websites and services that are protected by passwords will be greatly simplified, as well.

Robotaxis will be able to smell themselves…

We’ll wrap up today with a light-hearted topic that I found interesting. A company called Aryballe has developed a “digital nose.” Here it is: 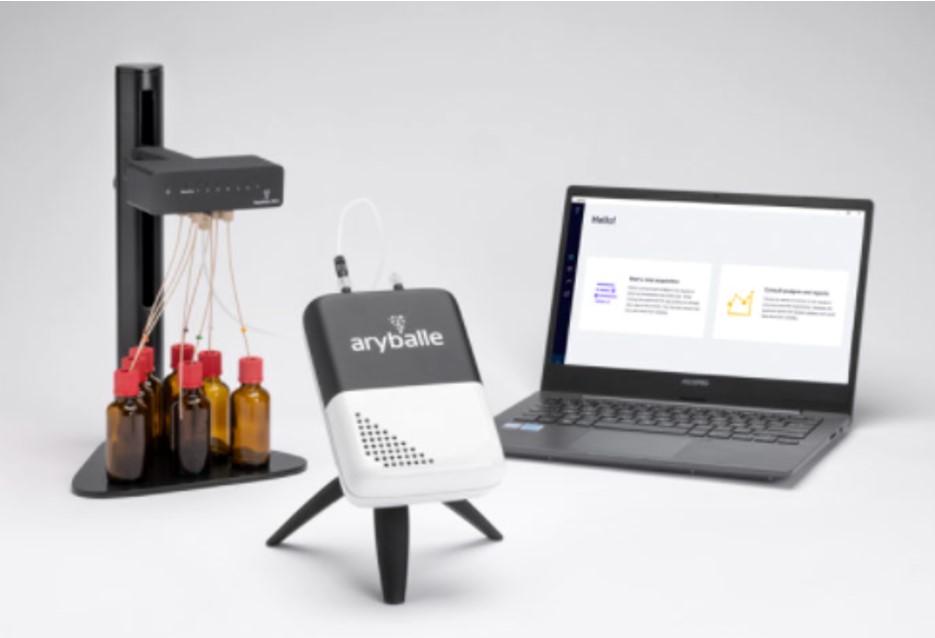 This device utilizes a combination of artificial intelligence (AI) and organic chemistry to provide computers with a sense of smell.

To do this, analog sensors capture the molecules of any smells in the near vicinity and convert those smells into a digital image. AI is used to determine a digital signature for each kind of smell so that it can recognize smells through a form of pattern recognition.

An Aryballe device is able to constantly “smell” its environment. When it identifies something that might be less than desirable, it can be prompted to take the appropriate action to remediate.

As neat as this is, it might not sound like something very useful for us today. But what if we think about a world full of robotaxi fleets…

Aryballe’s product will be invaluable when we get to the point where most ride-sharing and taxi services use fully autonomous cars. After all, without a driver in the front seat, how would a car know if there is a terrible smell in the car?

Having passenger-facing cameras will help identify trash left in the car. But what if there’s a bad smell that lingers? The cameras can’t help with that. And the next passengers would be quite unhappy if the car picked them up before taking care of the smell.

If it is just bad body odor or too much perfume, the car might be able to take care of the smell by driving the car around with the windows open. But if it is spilled food on a seat, or bad-smelling garbage left behind, the car can be prompted to return to a service center to be cleaned.

So Aryballe’s digital nose will be a critical piece of any robotaxi fleet. I’m very curious to see how fast the adoption of this product occurs.