What a Navy expert told me about nuclear-powered ships…

We know that nuclear fission provides dependable carbon-free power and that it has been used in naval applications for almost 70 years. My question: If it can power aircraft carriers, cruisers, and submarines, why hasn’t this technology been adapted for commercial use, i.e., powering container ships, tankers, etc.?

It would seem that nuclear power in such applications would cut pollution and carbon emissions significantly.

Hi Jeff, you’re absolutely right and it’s a very logical conclusion. But there is actually a very simple answer – cost. More on that in a bit.

We actually reached out to speak to someone with direct working knowledge on this subject. It’s a great topic, and we knew he could add some more color from his hands-on-experience.

For confidentiality reasons, I won’t reveal his name. But I can say that he trains personnel to work on nuclear-powered military vessels for the U.S. Navy.

Here’s what he told me…

It is theoretically possible for commercial vessels like tankers and container ships to make use of nuclear power. But there are several roadblocks to its adoption.

For starters, there is a very small talent pool for personnel trained to operate nuclear-powered vessels. And as we might imagine, almost all these experts are recruited by the U.S. Navy.

It is also very expensive to train the crew. Being certified to operate a nuclear-powered vessel is two years of intense training. And it typically costs upwards of $200,000. The U.S. Navy is willing to pay these costs. But for private businesses, the cost to train its staff would eat into its margins.

Not only is there a limited talent pool, but nuclear vessels require more personnel than we might imagine. A commercial cargo ship could be crewed by no more than 20 people. A nuclear submarine – however – requires upwards of 65 personnel for operation.

So, that’s the first problem. But there’s another roadblock.

The U.S. military has proprietary engineering that reduces the overall size of the nuclear propulsion system.

Obviously, our contact couldn’t reveal any specific details on these plans. Their secrecy is considered a matter of national security. But he could tell us that – even with the size reduction – half of the space on a submarine is dedicated to these systems.

Without these designs, commercial vessels would have to rely on commercially available systems. These are very bulky and would take up significantly more room on a commercial vessel. And as we can imagine, a shipping vessel needs as much room as possible to store cargo.

And finally, the cost to build these ships would be prohibitive. It’s difficult to estimate. But we know that a nuclear submarine can cost as much as $4 billion. Even large cargo ships – by comparison – are typically just over $100 million.

Another interesting dynamic is that in order to run these small nuclear reactors, they have to use highly enriched uranium. Far more enriched than a land-based nuclear reactor. The more the uranium is enriched, the better the power density. And in a ship, or more importantly on a sub, the reactor needs to be as small and quiet as possible.

These reactors are extremely expensive to build, and also expensive to operate… given the safety requirements related to running a nuclear reactor on a marine vessel staffed by humans.

For all these reasons, we likely won’t be seeing nuclear-fission-powered cargo ships anytime soon. But that’s true for fission, what about fusion? A company that I recently wrote about in The Bleeding Edge is developing a super compact nuclear fusion reactor that is small enough to be carried by a human. It’s called the Orbitron. Below is a picture for scale: 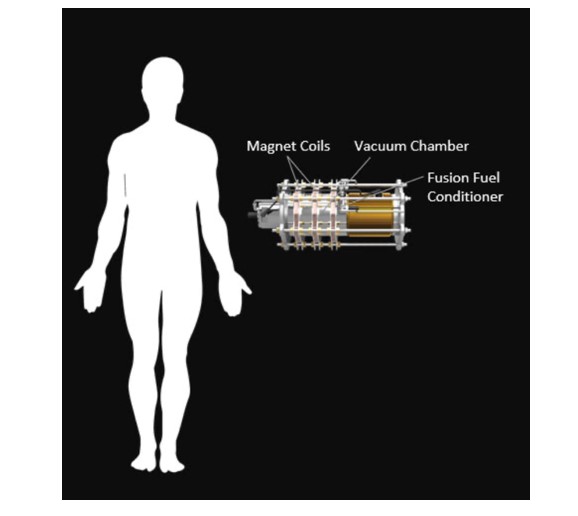 This technology hasn’t been commercialized yet, but it is one of the companies that I am most excited about in the energy industry. If Avalanche Energy is successful in its mission, this kind of device could in fact achieve what you suggested.

Thanks for the question, Jeff. I had fun digging into this one.

The end of the “Petrodollar?”

Does Jeff have any comment on the USD potentially losing its reserve status as the BRICS countries try to create an alternative? Some oil producers are dumping the petrodollar. Some economic analysts are calling for a catastrophe in U.S. markets at year-end.

Hi, Nicholas. Thanks for your question. It’s a big topic, but I’ll do my best to answer it succinctly.

For readers who might not be familiar, the “petrodollar” is not a currency. It is simply oil revenue priced in U.S. dollars. Virtually all global oil sales are conducted in dollars.

And because every country in the world needs oil to run their economies, this creates extraordinary demand for dollars. This, in turn, is one of the reasons why the U.S. dollar is the world’s reserve currency.

With that said, not every country likes the power of the U.S. and the need to transact in U.S. dollars. In fact, countries like Russia and China actively want to reduce U.S. influence and move away from the petrodollar.

There is also an open plan being led by the World Economic Forum (WEF) to intentionally reduce the influence of the U.S. and its currency on a global scale. This is all part of its plans for a “Great Reset” that it’s trying to affect by 2030.

All of these initiatives are deeply concerning to me, especially the activities of the WEF. And the current war with Russia is not accidental; I believe that it is tightly related to these efforts with China to weaken the influence of the U.S. dollar.

Sadly, this is the world that we’re living in, and in a void of leadership it leaves the doors wide open for bad actors to implement their plans.

As frightening as that is, I don’t think that we’re in for a catastrophe at year-end. We’ll certainly have more volatility, and the markets may be lower from where they are now; but barring a nuclear war, I don’t see anything catastrophic on the near horizon.

Now, more specifically to your question on the BRICS. For everyone’s benefit, BRICS is an economic bloc that includes Brazil, Russia, India, China, and South Africa. Many view BRICS as an “answer” to the G7, which includes the U.S., Canada, France, Germany, Italy, Japan, and the U.K.

BRICS countries met in June of this year. At the summit, Vladimir Putin remarked that BRICS partners were “exploring the possibility of creating an international reserve currency based on the basket of BRICS currencies.” Putin is also looking at alternatives for international settlements.

Reading between the lines, Putin is looking for a way to insulate his economy from further sanctions. The current sanctions have utterly backfired on the West. Russian oil revenue is higher than it was last year, and Europe is in the midst of a full-blown energy crisis.

But the sanctions were still very disruptive to the Russian economy. If oil sales were conducted using BRICS currencies, it would shield Russia from future energy sanctions.

Would a basket of BRICS currencies threaten the U.S. dollar’s role in the global oil market? It certainly won’t in the near term, definitely not by the end of this year, and I doubt it would have much of an impact even in 2023 or 2024.

Combined, the BRICS had a combined GDP of about 24.4 trillion in 2021. The GDP for the United States alone during the same year was about $23 trillion. The U.S. is still the world’s largest and most robust economy.

Another reason why I expect the petrodollar to remain intact is because of something known as “petrodollar recycling.”

This is when oil exporting countries take their profits – priced in dollars – and reinvest them in U.S. Treasurys or even U.S. stocks. Saudi Arabia has been doing this since the 1970s. Even with the volatility this year, U.S. equity and bond markets are still the best place to see a return on an investment.

Thanks for the question.

I appreciate that you are being nimble and looking at bonds. I like the idea of having access to municipal bonds.

Of note, when I tried to invest in the convertible bonds through Exponential Tech, none of the bonds were available on Fidelity’s bond desk. What would be a good low-cost broker that would have these bonds? If Fidelity looks for the bonds for me, it wants me to buy a large amount of bonds (50) – not practical for me.

Hi, John. Thanks for your question. And I’m glad you’re finding the research on different bond opportunities useful.

For readers who missed it, convertible bonds are a new strategy we are deploying in my small-capitalization research service, Exponential Tech Investor.

These investments deliver us regular income and have great downside protection, while still giving us a shot at equity-like capital gains. For readers that would like a full recap of this strategy, you can catch up right here.

As for where to find these convertible bonds…

It’s true that convertible bonds are not quite as easy as buying equities, but it’s not that difficult at all. Usually, all it takes is a simple call to the fixed income desk at our brokerage. But the extra few minutes are certainly worth it; these are some of the best investments I know of to navigate a difficult market like the one we find ourselves in now.

I anticipated readers would be curious which brokerages are best for these assets, so I asked my team to survey the availability for several major brokerages. Here’s what they found:

As we can see, at the bottom, Fidelity does have a minimum trade amount of $50,000 (50 bonds with a par value of $1,000). I know that’s not realistic for most investors. And it’s hard to understand why Fidelity does that, considering it is a retail brokerage house. But aside from that, there are some other great options listed above.

So for any subscribers looking for access to these bonds, I would encourage you to open an account with one of the first four brokerages listed and contact their fixed income desk for specific X-bond investments.

Thanks again for your question, John.

That’s all the time we have this week. Remember, if you’d like me to answer one of your questions, send me a note by writing to [email protected]. I’ll do my best to get to it in a future mailbag.