Inflation hasn’t subsided. In fact, it feels like it’s getting worse – which is why as investors – we should plan accordingly.

The broad equity markets will always struggle in an environment like this. It’s not that there’s anything wrong with the underlying businesses – it’s just that the market discounts growth resulting in lower valuations.

But there will always be some bright spots, even in a tough market like this. Certain energy and commodities markets will be strong in this environment. And some fixed-income investments and certain kinds of bonds, are an excellent place to deploy capital right now.

The reason for that is the tight correlation interest rates have on the 30-year fixed mortgage rate. And it’s remarkable what’s happened since the beginning of 2021… 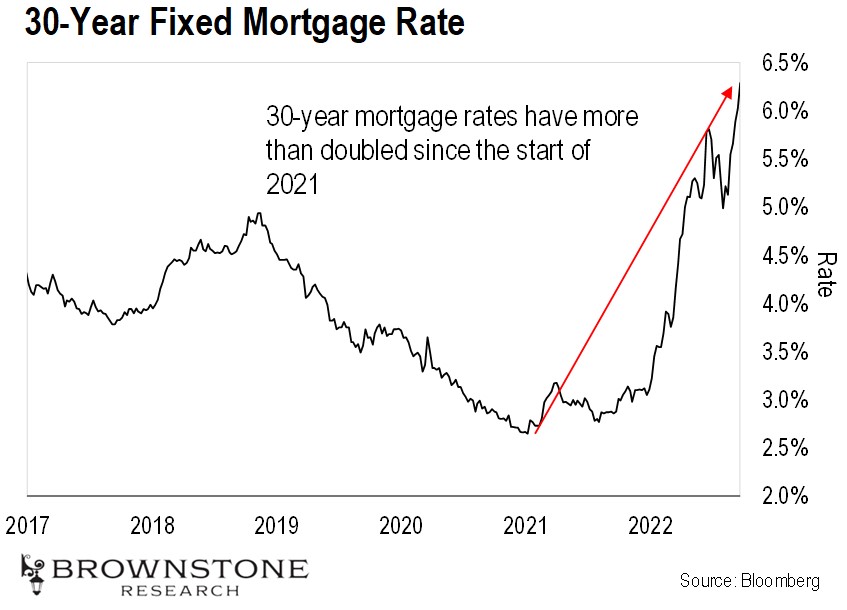 Rates got as low as 2.85% – and for home buyers willing to pay a few points – it was possible to get an even lower rate. I took advantage of these low rates myself… it was an incredible window of opportunity to benefit from what is essentially “cheap money.” 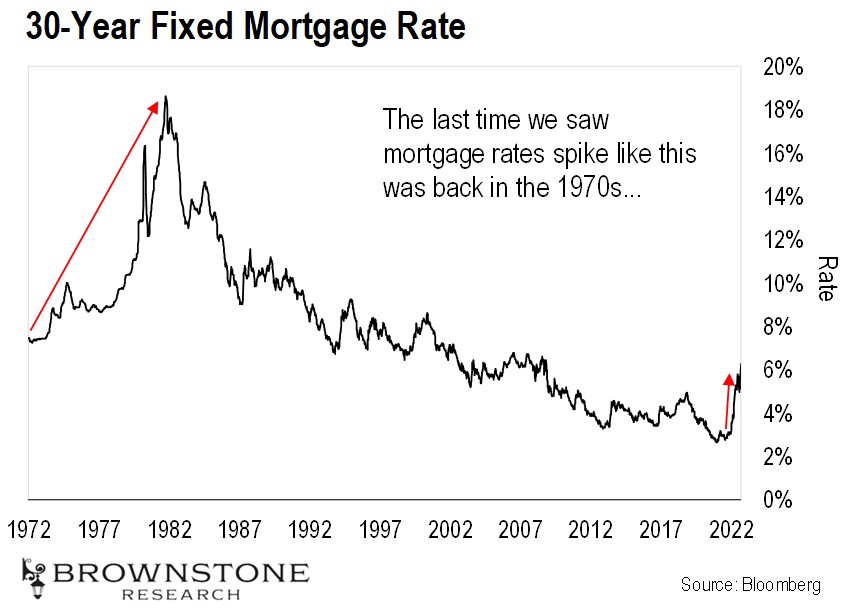 It’s just remarkable. The last time we saw a spike of this magnitude was back in the late ‘70s.

For the last 40 years, the U.S. has enjoyed a meandering trend of declining interest rates, which has made housing more affordable with every year that passed.

Time provides great perspective. Today’s 30-year fixed rate of around 6.43% was normal between 2002 and 2008. And before that, rates were much higher. But things were very different back then. There wasn’t runaway inflation for basic necessities in life for over the last 30 years.

The problem we’re facing right now is that the combination of monetary and economic policies has resulted in skyrocketing prices in gasoline, electricity, food, and services. There’s no cushion anymore to absorb the impact of rising interest rates on mortgage payments.

This time is different. Interest rates and the fixed 30-year mortgage, will go higher for the foreseeable future. And the negative impact to the housing market will be far more severe than anything we’ve experienced before.

The S&P Homebuilders ETF (XHB) is already down 35% this year, and there’s more pain to come…

Another exciting entrant to the new space race…

One of the many advantages billionaires have is that they can pursue outrageous and interesting projects over long periods of time.

And no industry requires more time and money than the aerospace industry. Vast Space – a company I suspect most have never heard of – just announced plans to develop, launch, and operate its own private space station. And this company has a unique vision…

Billionaire Jed McCaleb founded Vast Space. He was the person who originally started the Mt. Gox trading platform that became the world’s first major bitcoin exchange. McCaleb was also a founder of Ripple Labs and Stellar in the digital asset space.

And McCaleb’s vision for Vast Space is to create a space station with artificial gravity. He believes that this is critical to having meaningful commercial industry in space.

Of course, this is something that hasn’t been done before. But it has been a popular subject in science fiction for years. And the physics is straight forward. A space station – or long duration spacecraft – can be designed with the ability to rotate around an axis.

By creating centripetal force, the wall of the space station will “push” against us simulating gravity and allowing us to stand or sit up. Below is an example of what a space station might look like to accomplish this… 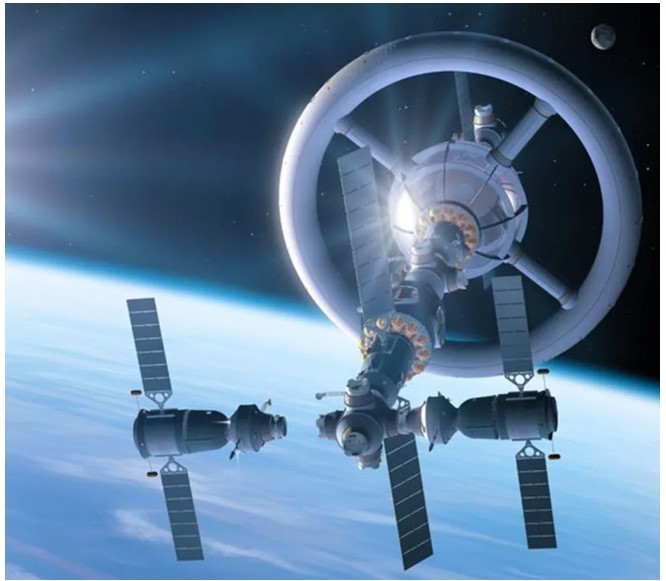 In this design, a wheel-and-spoke architecture that rotates around an axis is used for both zero-g activity, as well as docking of the spacecraft to the space station.

The centripetal force from the “wheel” spinning simulates gravity. And that eases living conditions for humans while mitigating some of the negative health impacts of being in space – such as the decline of bone density.

McCaleb plans to build the space station in modules on Earth. Then he plans to use SpaceX’s Starship rocket to get those modules up into orbit. So Vast Space will compete directly with companies like Axiom Space and Blue Origin’s Orbital Reef project.

And like these companies, Vast Space is primarily focused on commercial applications. Its space station will accept space tourism. And Vast envisions a module where institutions could conduct scientific research in space.

What’s more, corporations could even engage in space manufacturing. There are specific applications where this could provide a tremendous advantage. One example is fiber optics.

Producing pure fiber-optic cables in space could materially improve the speeds at which data can be transmitted over light. For certain kinds of applications, even improvements of nanoseconds of delay can result in a material outcome.

Vast Space will be fun to watch. McCaleb clearly has the financial resources, and SpaceX can definitely get the station modules into orbit. Now it’s just a matter of making it happen…

Autonomous delivery vehicles are on the rise…

He enters a code that causes the cargo hatch to open. The man then loads the pizza and presses a button to close the hatch… and off the vehicle goes. We can see that it’s capable of navigating safely on the street with other cars and pedestrians.

And when it gets to the delivery address, it sends a text message to the customer. She simply walks out front and enters the code she received to open the hatch. Then she grabs her pizza, presses the close button… and she’s done. No hassle. No tipping required.

We can see how both local restaurants and consumers could appreciate this kind of service. It’s simple, seamless, and reliable. We talked about that before. And what’s especially interesting here is Magna International’s foray into this space.

Magna International is a Tier-1 supplier to the automotive industry. And it’s also produced at least 10 cars from start to finish on behalf of large auto brands. Magna is a name that most probably have never heard of.

Magna is to the automotive industry what Foxconn is to the consumer electronics industry. Foxconn manufactures iPhones on behalf of Apple – and Magna manufactures cars on behalf of the carmakers. Magna’s latest electric vehicle partnership is also about to spring to life.

EV trailblazer Fisker partnered with Magna to manufacture its much-awaited electric vehicle – the Ocean SUV. The fact that it’s stepping into the world of autonomous electric delivery vehicles is very interesting. Clearly, Magna International sees a lot of opportunity in this space.

And what I love about this is that Magna can handle everything regarding the hardware. It’s an expert at delivering integrated automotive systems at scale. This enables the companies who are developing autonomous driving tech to focus on what they do best: the software.

Magna can take care of the rest. In the end, Magna is going to accelerate the accessibility and adoption of autonomous delivery vehicles. That’s exciting. I think we’ll really start to see this technology deployed in volume next year…

Even the AIs can’t circumvent censorship…

We’ll wrap up today with a concerning development.

These AIs create remarkable images based simply on text input from the user. Well, Baidu’s ERNIE works just the same way… with one major difference. Baidu omitted specific words, images, places, and people from the data set it trained the AI with.

These include politically sensitive words to the Chinese Communist Party like “revolution” and “climb walls.” It also left out “freedom” and “democracy” paired with the name of another country.

Of course, Chinese political leaders, including Xi Jinping and Mao Zedong are also not in the training dataset. And notably, Baidu also omitted all images and references to Tiananmen Square.

As a result, ERNIE-ViLG knows nothing about any of these politically sensitive words, people, and places. So, the AI simply can’t create any images involving these subjects. And that means Baidu censored the AI at the source code level.

No doubt Baidu did this to appease the Chinese government. I see this as a warning to the world. As we know, companies like Google, Facebook, and Twitter actively censored content over the last few years to support a specific political narrative.

It has actually been going on a lot longer than most realize, but it became glaringly obvious over the last few years. And we discovered that it’s remarkably easy for these companies to manipulate consumers by doing so.

What Baidu has done with ERNIE has demonstrated how simple it is to do the same thing, but at an even more fundamental level. By controlling the training set for an AI, it eliminates the ability for the AI to “think” about restricted topics.

It would be the equivalent of removing bodies of knowledge from the education system so that students never become aware of certain subjects. That’s what make this so freighting.

As the use of AI becomes more and more prevalent – and the large tech companies that exert so much influence over our daily lives employ this approach – they can effectively remove bodies of information and/or opinions from the systems that we rely on daily.

In time, this will negatively impact the global population. And if we think about a world in which AI-based digital assistants are prevalent and made freely available, these systems could be manipulating our thoughts throughout the day.

They could gently and subtly push us in the “right” direction in ways that would be unnoticeable to most.