An easy way to see how out of whack the market for used cars is right now is by looking at the Manheim Used Vehicle Index. Manheim developed this index from its database of more than five million used car transactions each year. 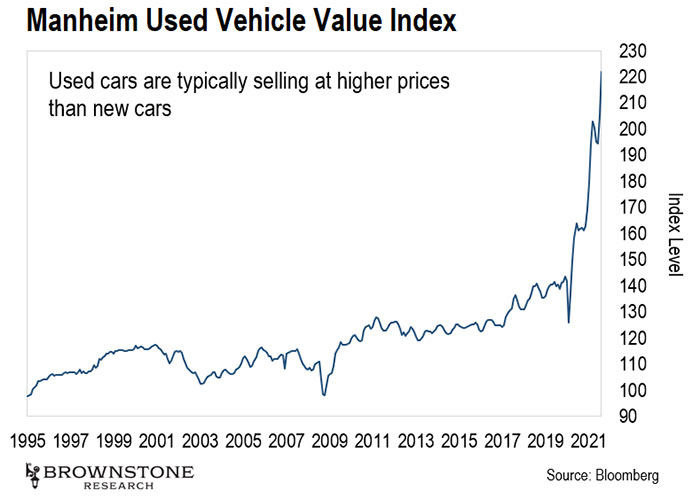 It’s pretty easy to see that the index is at all-time highs. Used cars are often selling right now at prices higher than if they were new.

The shortage of new cars has pushed buyers into the used market, which is driving up prices to crazy levels. I’ve noticed the same dynamic in the boating industry as well. I’ve never seen anything like it.

And, of course, the problem at large is the chip shortage that is affecting most automobile manufacturers. Production lines have come to a complete halt.

There are even massive parking lots of “almost finished” cars and trucks just waiting for that last semiconductor or component to be installed before they can be shipped to dealerships. It’s just one symptom of the larger “tech shock” I see happening in the semiconductor space.

This is an incredible time in the semiconductor industry, as prices and gross margins are increasing. And this is giving those same companies even more capital to invest in the next generation of semiconductor technology.

There are some incredible investment opportunities out there, especially in smaller-capitalization companies. You can go right here for my top “tech shock” recommendations to profit from this moment.

And I see this moment in time as a rapid shift toward electric vehicles (EV). The EV narrative is very powerful right now, and I’m expecting that we’ll see internal combustion engine (ICE) vehicle sales slowly start to decline, while EV sales will enjoy all the growth in the industry.

And since EVs use significantly more semiconductor content than ICEs, this is even more of a tailwind for the semiconductor industry that serves the automotive market.

The second private commercial space station is in the works…

Axiom Space has been a topic of discussion in The Bleeding Edge. It has been at the forefront of commercializing space. Last year, it announced its plans to build the first privately owned, self-sustaining space station.

Well, it seems Axiom now has some competition.

Jeff Bezos’ Blue Origin just announced that it is teaming up with several other companies to construct a private commercial space station in low earth orbit. The space station is dubbed Orbital Reef. And these companies plan to have it up and running by the end of the decade.

Orbital Reef will consist of habitation modules, a science and research module, and even modules used for growing food. Incredible.

Here are a few renderings of what the inside will look like:

Inside the Space Station 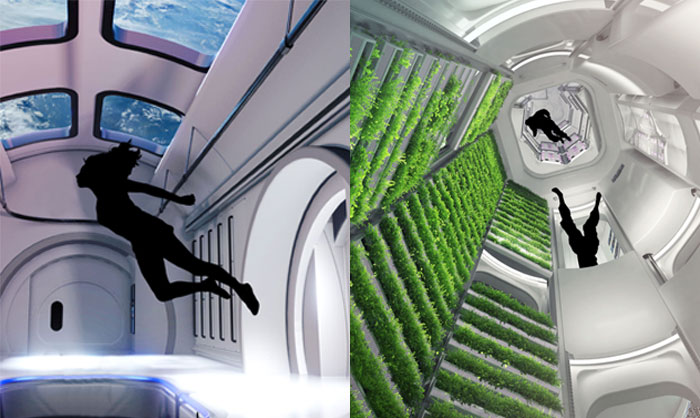 The team is marketing Orbital Reef as a “mixed-use business park.” It will be available for anyone to visit as a tourist. It will also be available for filmmaking and commercial photoshoots. And companies can use its science facilities to conduct research in a low-gravity environment.

Orbital Reef will have its own spacecraft for shuttling people to the space station. It will also feature a single-person spacecraft that will allow tourists to take “space walks.” Here are a few visuals: 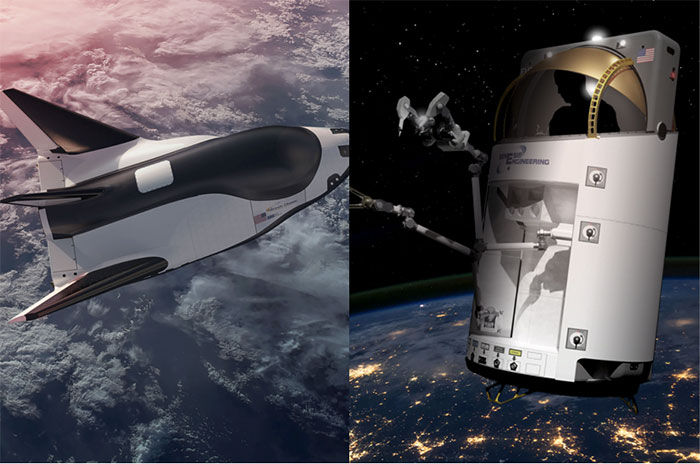 This is quite an ambitious project – especially considering Blue Origin has not yet launched anything into orbit. That said, Orbital Reef has the funding and the partnerships in place to make this happen.

As for the team, Blue Origin will focus on the large-diameter core modules as well as the New Glenn launch system, which is the heavy lift rocket.

Sierra Space will provide the living modules and the Dream Chaser spaceplane for crew and cargo transportation.

And there are a few other companies that will make additional contributions to the project.

So this is a very exciting development that we’ll be watching closely.

And this is especially interesting considering Blue Origin has failed to beat out SpaceX for prominent contracts with NASA recently. That’s something Bezos has been publicly upset about. He has gone so far as to sue NASA for its decisions around awarding contracts.

In fact, I suspect this was the genesis of this idea for Orbital Reef. Instead of waiting on government contracts, Bezos and Blue Origin will go at it alone and build their own space station. What a bold move.

And given Bezos’s deep pockets, he has the capital to make it happen.

In a not-so-surprising announcement, Amazon just revealed that it is working on its own smart refrigerator. It has kept this project quiet for a few years now. It’s called Project Pulse.

Amazon Go stores use artificial intelligence (AI) to keep track of which items consumers take off the shelves. Then, when they leave the store with these items, their Amazon account is automatically charged for what they took. It’s incredibly convenient. Simply walk in and scan your palm or Amazon code, take what you want, and walk out.

Amazon’s smart refrigerator will work in much the same way. It will keep track of what items are inside at all times. The fridge will keep an inventory of its contents.

This will allow the AI to quickly learn about our likes, preferences, and normal consumption patterns. Then it can send us alerts whenever we are running low on an item we normally keep on hand. It will also be able to predict what we may want or need ahead of time.

That alone makes this an interesting product. And I’m sure Amazon will take this one step further…

As we know, Amazon acquired Whole Foods back in 2017. The company is also rolling out its own line of “Just Walk Out” grocery stores in the U.S.

So it is very easy to foresee a time when Amazon’s smart fridge will automatically place an order any time we are running low on something we routinely consume. We would never have to rush out to the grocery store again.

This automatic order service would be incredibly sticky. It may take a little while to catch on, but once consumers experience the convenience of having their fridge do their grocery shopping for them, they’ll never go back. Amazon will become even more entrenched as a utility for many consumers.

So this is a very shrewd move. The smart refrigerator will solidify Amazon’s growing grocery business. I’m excited to see if they announce the product before year-end.

This early stage software company could become bigger than Slack…

We’ll wrap up today with a hot software startup that needs to be on our radar.

It has become a very popular tool for digital-first companies that thrive on efficiency and working in real time with teammates. And the company’s story is interesting…

Notion raised $18.2 million in its first venture capital (VC) seed round back in July 2019. The company had been around for three years at the time of that raise, and it was valued at $500 million.

However, Notion was still a raw platform. It had a bit of a cult following, but it was not yet well-known. Its user base consisted of about one million people.

Then the pandemic hit.

Notion’s popularity took off as remote work was thrust upon everybody in early 2020. The company saw its user count begin to balloon, and it used that momentum to raise another $50 million. This valued the company at $2 billion. It became a unicorn.

And then Notion caught on fire. It was especially popular with the Generation Z population – people born between 1997 and 2012. That led passionate users to create a TikTok video featuring Notion… and it went viral. From there, Notion’s user count exploded higher.

This led Notion to raise another $275 million in venture capital to help it scale the platform. That raise just closed earlier this month. And Notion is now valued at $10 billion. It’s a decacorn.

The rise of companies like Slack and Notion is more than just a great story of accelerated growth. This kind of rapid innovation and technological development is happening everywhere.

The same thing is going to happen with Notion. This is one of the fastest up-and-coming software companies out there, and it is destined to be acquired. The only question is whether that happens before or after the company goes public.

So this is definitely a company to watch going forward. And as a user myself, I can personally recommend the platform for readers who may want to check it out. It has a bit of a learning curve, but it’s very powerful once you get used to it.

The rise of companies like Slack and Notion are more than just a great story of accelerated growth. This kind of rapid innovation and technological development is happening anywhere.

In the last 24 months, something changed. Companies are able to scale at a pace that I’ve never seen before. And that means outsized investment returns can happen just as quickly. This is a remarkable time to be a well-informed investor in tech and biotech.

P.S. After months of investigative work, I just released an important briefing about Apple’s new secretive project earlier today… a project that could put $10 trillion up for grabs. And I’ve found one player that could absorb the lion’s share of this wealth.

This situation is time-sensitive… In fact, I believe key pieces could start moving as soon as November 19. If you missed my briefing from this morning, please go right here to catch up now.