It was bound to happen.

Back in the fall of 2019, Microsoft prevailed over Amazon in a $10 billion government contract to provide cloud services for the Pentagon. It appeared that Microsoft had won fair and square.

But Jeff Bezos didn’t like it one bit, claimed foul play, and hired a team of lawyers to contest the decision. Bezos dragged out the battle so long that last month the Pentagon gave up and decided to cancel the entire contract.

Apparently, its needs had changed, and technology had shifted during the extended time that lapsed.

This was a massive loss for Microsoft. And it was a massive victory for Amazon, resulting in new contracts that the company could bid on.

And just a few days ago, Amazon Web Services was awarded a $10 billion contract from the National Security Agency (NSA).

And now Microsoft isn’t happy at all.

In fact, it has decided to replicate Amazon’s tactic by filing a protest with the Government Accountability Office concerning Amazon’s $10 billion win.

Microsoft is claiming, just as Amazon did when the roles were reversed, that the NSA didn’t conduct a proper technology evaluation, and that the bid wasn’t fair.

Even more hilarious is that the NSA’s code name for the contested project is “WildandStormy.” I couldn’t make this up.

Bezos – perhaps feeling emboldened after his successful JEDI protest and recent win with the NSA – is suing NASA over its decision to award the lunar lander contract to SpaceX. He’s claiming that NASA’s evaluation was “unlawful and improper.”

Worse yet, Bezos has gone so far as to try and very publicly attempt to discredit SpaceX and its technology to return the U.S. to the moon. Have a look below at a snapshot of Bezos’ fear, uncertainty, and doubt (FUD). 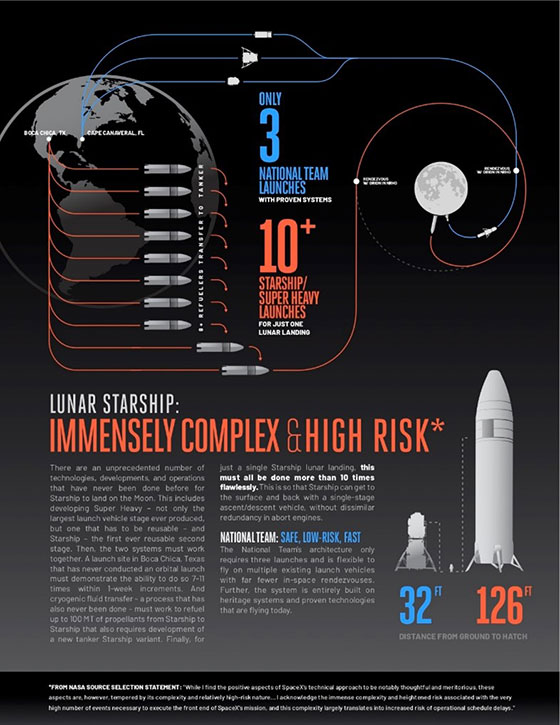 Per Bezos, the SpaceX approach is “immensely complex & high risk.” I’m pretty sure that one could say the same thing about any form of space travel…

Perhaps I can offer a polite suggestion for Blue Origin… Spend less money on a legal team, and spend more money on building great technology. I’m certain the results will be better in the end.

We just broke the second law of thermodynamics…

Last week, my son asked me if it’s possible to break the laws of physics. My answer was no, as they are the laws that define how matter and particles interact. They explain how the universe works. That’s why they are “laws.”

But I did also explain that there are some theoretical approaches to bending the laws of physics. They just hadn’t been proven yet.

Well, one week later, it appears I was wrong.

A team at Google – working in collaboration with physicists at Stanford and Princeton – just published some incredible research.

The group used Google’s quantum computer to develop a “time crystal” that moves in a precise manner without burning any energy. A time crystal is a new category for phases of matter – one that physicists have searched for over many years.

I’ll explain the significance of this in just a minute. But first, have a look at this depiction:

As we can see here, the crystal “jumps” in a repeating pattern effortlessly. And it does this without burning any energy.

This should not be possible. It stands in direct violation of the second law of thermodynamics. That law says that as energy is transferred or transformed, more and more energy is wasted. And as a result, in any isolated system, there’s a natural tendency for things to deteriorate into greater disorder – an idea known as entropy.

The theory behind time crystals has been around for decades now. But they were never practically possible… Until we got advanced quantum computing technology.

This is exactly the kind of challenge that quantum computers are designed to embrace…. Solving the unsolvable and discovering what was once thought impossible.

This discovery may seem a bit obscure on the surface, but it’s a far bigger deal than we might think. Time is our most valuable asset, and precise timing underpins the world’s computing and communications systems. Time crystals like this could underpin the next generation of computing systems and networks.

What’s more, time crystals could be used to calculate the base state of a quantum computer. That would help cut through the “noise” and make for more accurate quantum computers. Think about that…

Google’s quantum computer has just developed something that will help improve quantum computers’ performance. It’s easy to see how beneficial and fast a feedback loop like that will work to accelerate technological development.

This is an absolutely mind-blowing development. It perfectly displays why I have been so excited about quantum computers.

It’s still early in the game, but the rise of quantum computing will provide us with some incredible investment opportunities. And some of them will most certainly find their way into Exponential Tech Investor.

The full life cycle of the electric vehicle industry…

I have been following an early stage company called Redwood Materials for years now. And the company just hit a major milestone.

Redwood Materials just raised a massive $700 million in its Series C funding round. The company is now valued at $3.7 billion. And its impressive list of backers includes Tesla, Amazon, and Breakthrough Energy Ventures – which itself is funded by Bill Gates, Jeff Bezos, Michael Bloomberg, and Mark Zuckerberg. What a list!

What makes Redwood Materials so interesting is it was founded by J.B. Straubel. Readers may recognize that name.

Straubel was the cofounder and former chief technology officer of Tesla. He was involved in the early days of electric vehicle (EV) design and development. And he was instrumental in the strategic approach Tesla took to lithium-ion battery technology.

In other words, Straubel’s work helped Tesla’s EVs become commercially viable. He set the stage for the “front end” of the EV industry.

Then he left to start Redwood Materials in 2017. The company’s sole purpose is to handle the “back end” of the industry. The goal is to develop the advanced technology needed to recycle lithium-ion batteries.

Here’s the thing – it’s incredibly difficult and expensive to mine the lithium, nickel, and cobalt that go into lithium-ion batteries. And doing so is destructive to the environment as well. These are things people rarely talk about.

What’s more, lithium-ion batteries are incredibly toxic to the environment once they are produced. To be clear, they aren’t toxic to humans. But we can’t just throw these batteries away when their useful life is over.

That’s where Redwood Materials comes in. The company is developing tech that can extract lithium, nickel, and cobalt from old batteries and then sell them back into the industry to make new batteries. That will reduce the amount of new mining that needs to be done to sustain the EV industry.

I love this mission. It’s something we don’t think about, but creating a sustainable method for recycling lithium-ion batteries is critical to the long-term success of the EV industry. And of course, it’s very important for environmental reasons as well.

Redwood Materials located its first recycling plant in Nevada – very close to Tesla’s facility. And this big Series C raise will help the company build new recycling plants all around the world.

I’m very happy to see a business like this start to flourish. While the EV industry is still in its infancy, there are already EV batteries and EVs out there that have reached the end of their respective lifespans. Dumping these assets into landfills is an awful approach, and it’s diametrically opposed to why we’re building EV technology in the first place.

And we should note that firms like T. Rowe Price, Goldman Sachs, Fidelity, Franklin Templeton, Baillie Gifford, and even Canada Pension Plan Investment Board participated in Redwood’s Series C round.

As regular readers know, that’s late-stage capital coming in. That’s our signal that Redwood Materials will likely go public within the next 12 months or so.

And given the inflection point in the EV industry right now, I believe that Redwood is going to need even more capital to build out global recycling infrastructure to manage the exponential growth in end-of-life lithium-ion EV batteries.

Google is putting AI in the palms of our hands…

We will wrap up today with a major development in the smartphone industry.

Google just announced that it is designing its own smartphone processor. It’s called Google Tensor, and it will go into Google Pixel smartphones. 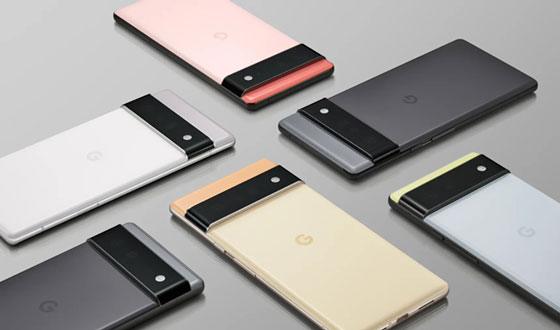 Historically, Google has relied on Qualcomm for its smartphone processors. But using generalized semiconductors like this comes with limitations. By designing its own customized processor, Google will enable ultra-high-end Android phones.

Google Tensor is a very sophisticated System on a Chip (SoC). It is composed of a central processing unit (CPU), a graphics processing unit (GPU), and an image signal processor. In addition, the system contains a processor dedicated to artificial intelligence (AI) and machine learning (ML) functions. That’s big.

So we’re seeing a shift in how Google is approaching the smartphone market. The company’s focus has been on enabling mass-market low- and mid-range smartphones.

This was an extremely successful strategy that has resulted in Google having about 87% of the global market share for smartphone operating systems. I always get a good chuckle when people tell me that Apple has a monopoly.

Now that Google has established the market so well, it’s looking to better position itself on the very high end in an attempt to take market share away from Apple. With this move, Google will enable high-end Android phones that put AI right in the palms of users’ hands.

And they’ll be able to compete with the tight integration of hardware and software that Apple is so well known for.

And this raises an interesting question. Will Google license or sell the Google Tensor product? That’s what I am watching for.

If Google does license or sell its processor, that would enable other manufacturers to build high-end Android phones as well. Google Pixel won’t be the only game in town.

And I bet that this is exactly what Google wants.

After all, Google isn’t really in the business of making smartphones. It wants the data that is generated by using its Android operating system. And empowering other manufacturers to compete directly with Apple would certainly be good for Google in this regard.

This could have a material impact on the smartphone industry. And it certainly foreshadows the future direction of smartphones.

We’re witnessing the birth of a new generation of devices that can run machine learning applications capable of “thinking” and inferring without having to connect back to some centralized computer in the cloud. That’s a game changer.

It’s truly putting intelligent supercomputers in our hands. And that will lead to some incredible applications that we haven’t seen yet. It’s coming, and much sooner than we might think.

We’re going to see the first wave of AI-powered software applications that take advantage of the speeds and low latency of 5G wireless networks within the next 12 months. And after that, it will be like drinking from a firehose.

For years, the blockchain industry has been building out the infrastructure of this technology. And now, we’ve finally reached the point where I’m ready to share my research with readers. We’re on the cusp of an important development in this space… And the largest giveaway in crypto history.

On August 25, at Click for Crypto, I’ll explain this special opportunity… And reveal how investors can get involved right now.

If you’re at all interested in crypto and blockchain technology… Or are looking for hot new recommendations, then please make sure to attend this event. Go right here to RSVP.