Seemingly every week, readers write in with variations of the same question: How should an investor profit from the electric vehicle (EV) revolution?

Readers have asked about battery technology, new EV startups, and even investing in lithium miners.

And I’d like to thank all my readers for being so engaged with this topic. So today, I’ll be very direct.

As my longtime readers know, I view electric vehicles as one part of a trend I refer to as “the future of transportation.”

And despite what we see on the roads every day – it seems like electric vehicles are everywhere – this is a trend that is still just getting started.

It has just been in the last two years that EVs have really taken off. In fact, 2020 was the first year in the U.S. where consumers registered more than one million EVs.

The below chart gives us a good idea of where EV adoption is right now, and where it’s going in the years ahead. 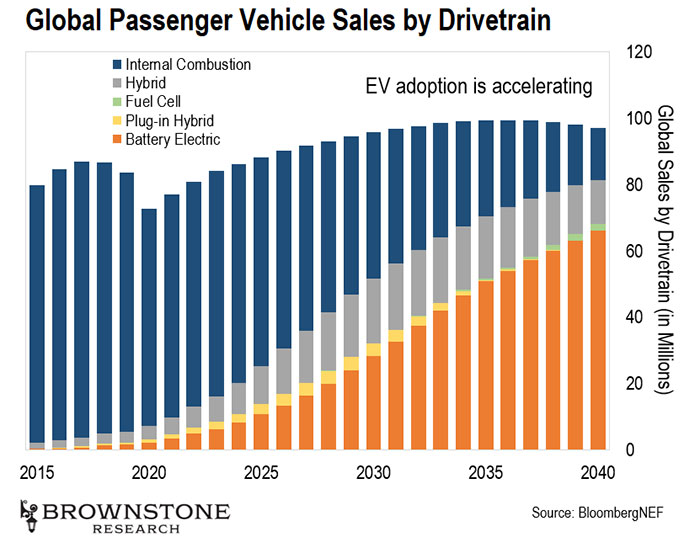 On a global level, only 4.6% of new car sales are EVs. In China, that number is 5.7% – in the U.S., it’s only 2%. But have a look at the projection for EV adoption. We can see that “battery-electric” vehicles are hitting an inflection point. That’s when growth starts to really take off.

And we should keep in mind that this data only shows passenger vehicles. Logistics networks are adopting EVs as well. Amazon recently signed a deal with EV company Rivian for its delivery vehicles. Amazon will purchase between 10,000–100,000 of these boxy-looking EVs. 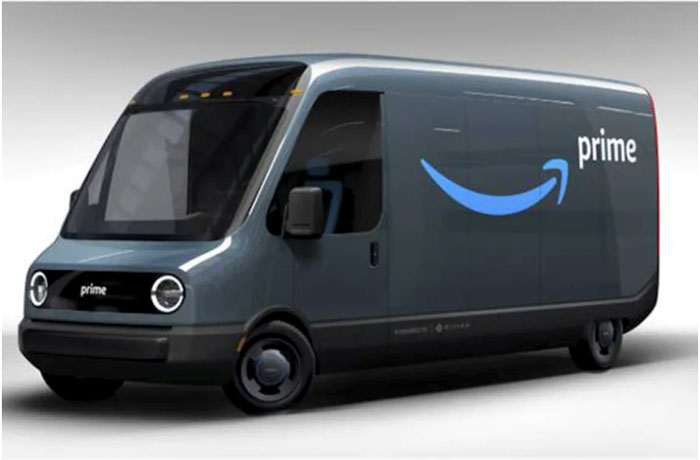 Amazon also bought Zoox, which has a self-driving taxi prototype. This is all-electric as well. Nuro’s smart delivery vehicles, which Domino’s already uses to deliver pizzas, will be all-electric. 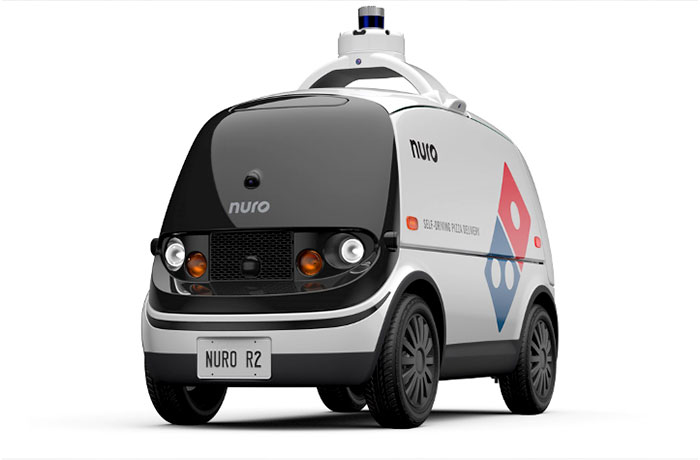 And on September 15, Walmart announced a partnership with Ford and Argo AI for their electric, autonomous vehicles to be used for deliveries. We will soon see this service in Miami, FL; Austin, TX; and Washington, D.C.

And so we come back to our question today: How should investors profit from this megatrend?

The answer may surprise many of us. That’s because my investment thesis for my #1 EV recommendation involves an unlikely company: Apple.

Apple’s EV ambitions are something of an “open secret.” The company has code-named its EV initiative “Project Titan.”

Apple has kept this project quiet over the years, but we’ll occasionally see an autonomous car with lots of sensors – but no logo on it – traveling around Silicon Valley. That’s Apple working on its self-driving technology. 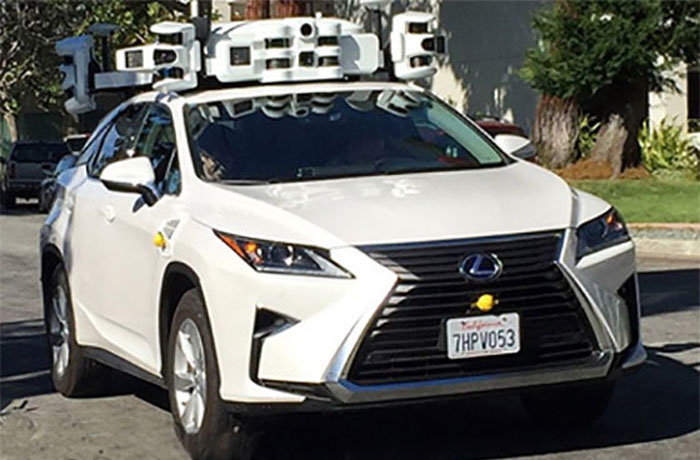 Apple may seem like an unlikely candidate to sell an electric vehicle. But let’s consider the company’s history.

In the late ’90s, Apple was mostly known for its personal computer business. That changed in October 2001. That’s when Apple released a surprising new product: the iPod.

The product became a sensation. Over the years, hundreds of millions of units have been sold. At the height of its success – in 2008 – the iPod accounted for nearly 40% of Apple’s revenue.

Apple did it again in 2007. As I’m sure we know, that’s the year the company released their most important product to date: the iPhone.

At the time, the product was misunderstood. I remember Steve Ballmer – then CEO of Microsoft – said, “There’s no chance the iPhone is going to get any significant market share. No chance.”

Clearly, Ballmer was wrong, as were many others. Today, close to half of all American smartphone users have an iPhone. iPhone sales now represent more than half of Apple’s revenue.

Apple has surprised the world before.

Apple is a great business… but it’s not my #1 EV recommendation right now.

And here’s where the story gets interesting.

The Company Sitting at the Center of It All

With a $2.46 trillion market cap, Apple’s best days of growth are behind it. That doesn’t mean there’s anything “wrong” with the business. But its days of “multi-bagger” returns in just a few years are gone.

The opportunity I’m recommending today is not Apple… but I believe it will play a pivotal role in Apple’s EV ambitions.

Based on my analysis, I believe there is 10X potential here. And I’ve put all the details in an online briefing.

To discover the full story, go right here to access the details.